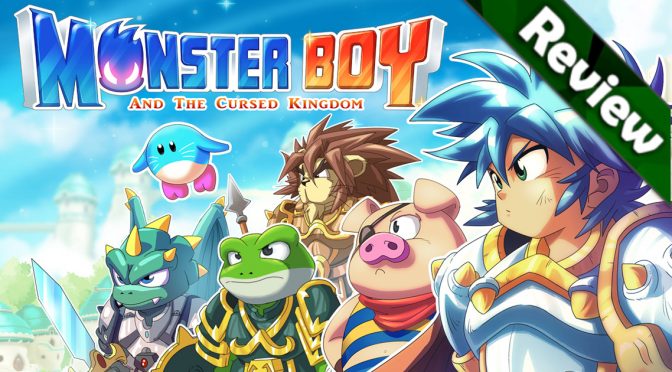 A friend and fellow gaming writer once told me the worst part of this job is when you have to review something the community loves, yet you just cannot seem to like it. The Steam store page is plastered with blue thumbs pointing up, Metacritic boasts a whopping 86%, but, somehow, you just cannot relate to the masses. Well folks, with Monster Boy and the Cursed Kingdom, that day has arrived on my PC.

Let me be clear that I do not think Monster Boy is a disaster. This game still shows that rare gem of innovation you can only get from the AA and indie scene, and it can be really fun to play. I can tell that the developers – FDG Entertainment – are certainly in touch with the strengths of their source material.

In truth, my objection to Monster Boy’s overwhelmingly positive reception lies in how this game clearly runs into some infuriating moments of inconsistency. The delicate balance held between its unique blend of Metroidvania and platformer components too often gets shoved aside for seriously frustrating moments. I feel like I spent just one too many moments of my play time gnashing my molars together.

More than a Tenacious D Song

Monster Boy has quite the legacy behind it, and you can trace its primary influence all the way back to SEGA’s Wonder Boy that came out during the mid-80’s. Since then, the Wonder Boy IP has passed between the hands of several different developers, and every subsequent studio contributed at least one new gameplay mechanic that stuck.

Now the torch has been handed to a German-based studio, namely FDG Entertainment, who have added their own bits to this Frankenstein monster of an IP, and they done a great job at using Monster Boy’s diverse development journey to make the gameplay relevant again. What we have here is a game that is neither pure Metroidvania nor thoroughbred platformer, but instead draws from the strengths of both.

Monster Boy’s story is so simple that the title is practically a spoiler. Once upon time, in a mystical kingdom, our hero Jin’s uncle Nabu unexpectedly goes nuttier than squirrel poop, and starts flying around on a broomstick like a witch. In a moment of naughty sorcery, he ends up spreading a strange curse across an entire kingdom which turns all the inhabitants into humanoid animals. 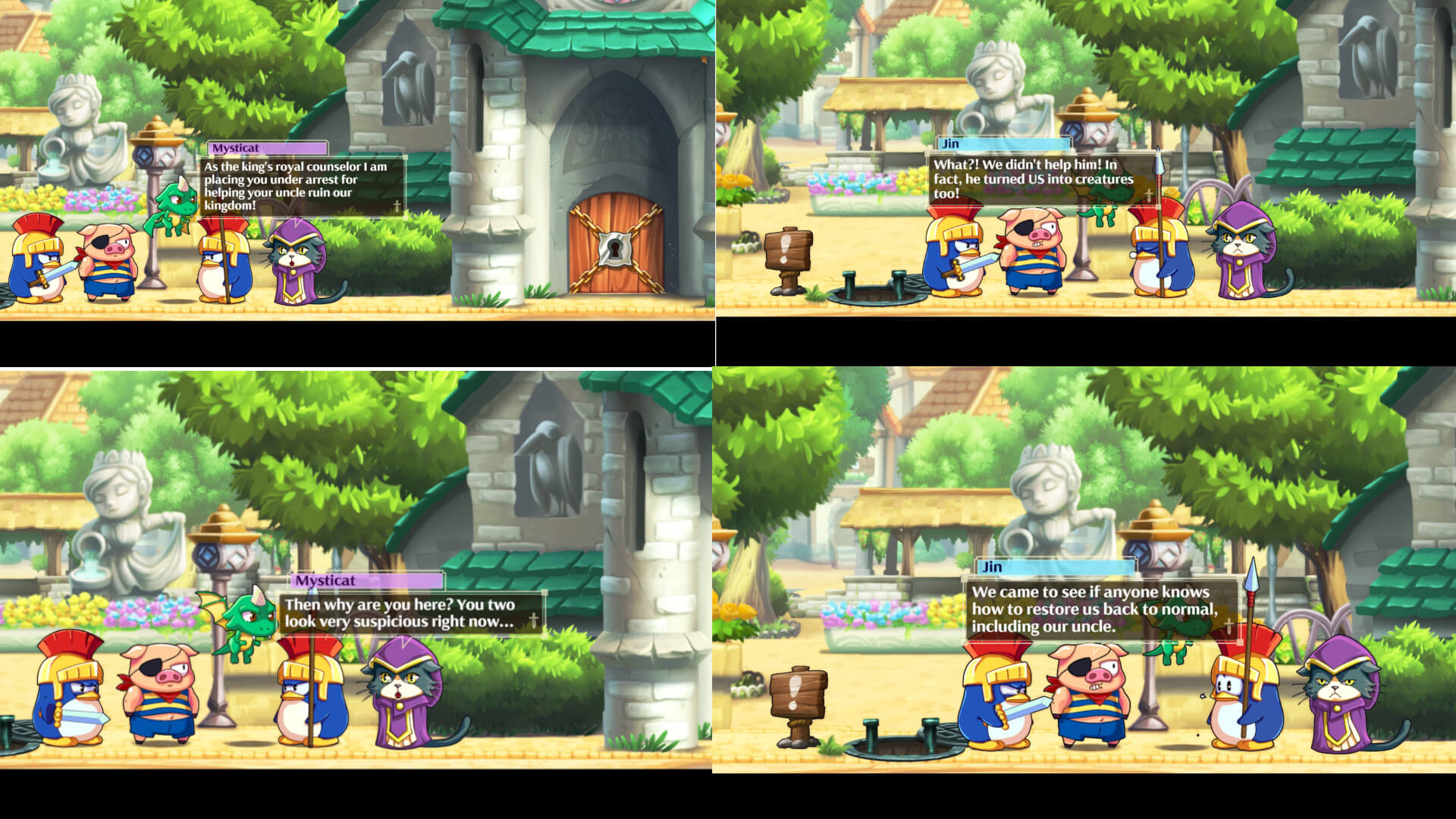 You can actually talk to some NPC’s during gameplay, and I must say they seem rather laid-back about being turned into bipedal livestock and domesticated pets. Perhaps they don’t mind being infested with fleas, or licking their own butts? Either way, our hero Jin chooses not to spend the rest of this life as a piggy, and swears to put an end to his uncle’s antics.

Our hero soon discovers he may have bitten off more than your average hog can chew. To reverse his uncle’s curse, Jin must unite five magical orbs hidden in treacherous jungles, dank caves, and even at the bottom of the ocean. Oh, and each orb is protected by a giant monster (read boss fight).

Once Jin gets his porky hooves on the first orb, however, he inherits its power, which gives him the choice between more than one animal form! Turning into a frog suddenly makes reaching the underwater orb a breeze, and being a slippery snake means small crawlspaces are hardly a challenge anymore (and, for some reason, crystals light up dark spaces when you spew poison on them).

My reason for saying that Monster Boy feels like a blend of genres is because it plays out like a Metroidvania game in its progression style, yet the snappy movement and combat mechanics lean more towards a platformer design. It is particularly in the latter where FDG Entertainment’s experience in developing physics-based, mobile games really shows.

With regards to the Metroidvania elements, Monster Boy brings back what was established in 1992’s Wonder Boy III: The Dragon’s Trap. This game introduced a sprawling map to the series that gradually opened up to the player as they also gain the ability to transform into different animals.

Whereas games such as Dead Cells or Hollow Knight imbue the player with weapons or abilities to assist with progression through the map, Monster Boy puts its own spin on this process by asking the player to transform into an entirely different character. The player will ultimately have a choice between a total of five different animals after collecting all of the orbs.

I already mentioned the little pig who is a long range projectile specialist, and also a hidden treasure sniffer. He can hit enemies from a distance during combat, or trigger switches in puzzles, plus he makes the most adorable little fart every time he eats an secret upgrade!

The pig sinks like a stone underwater though, which is where the frog comes in. He is super agile below the surface, and he can use his extendable tongue to hang, or to pull things thus giving the player a useful traversal tool later in the game. Then there is the muscular lion that represents the warrior-tank of the bunch. He can dash upwards which is particularly helpful if your jump needs a bit of extra height, or bash through brittle walls when dashing sideways. 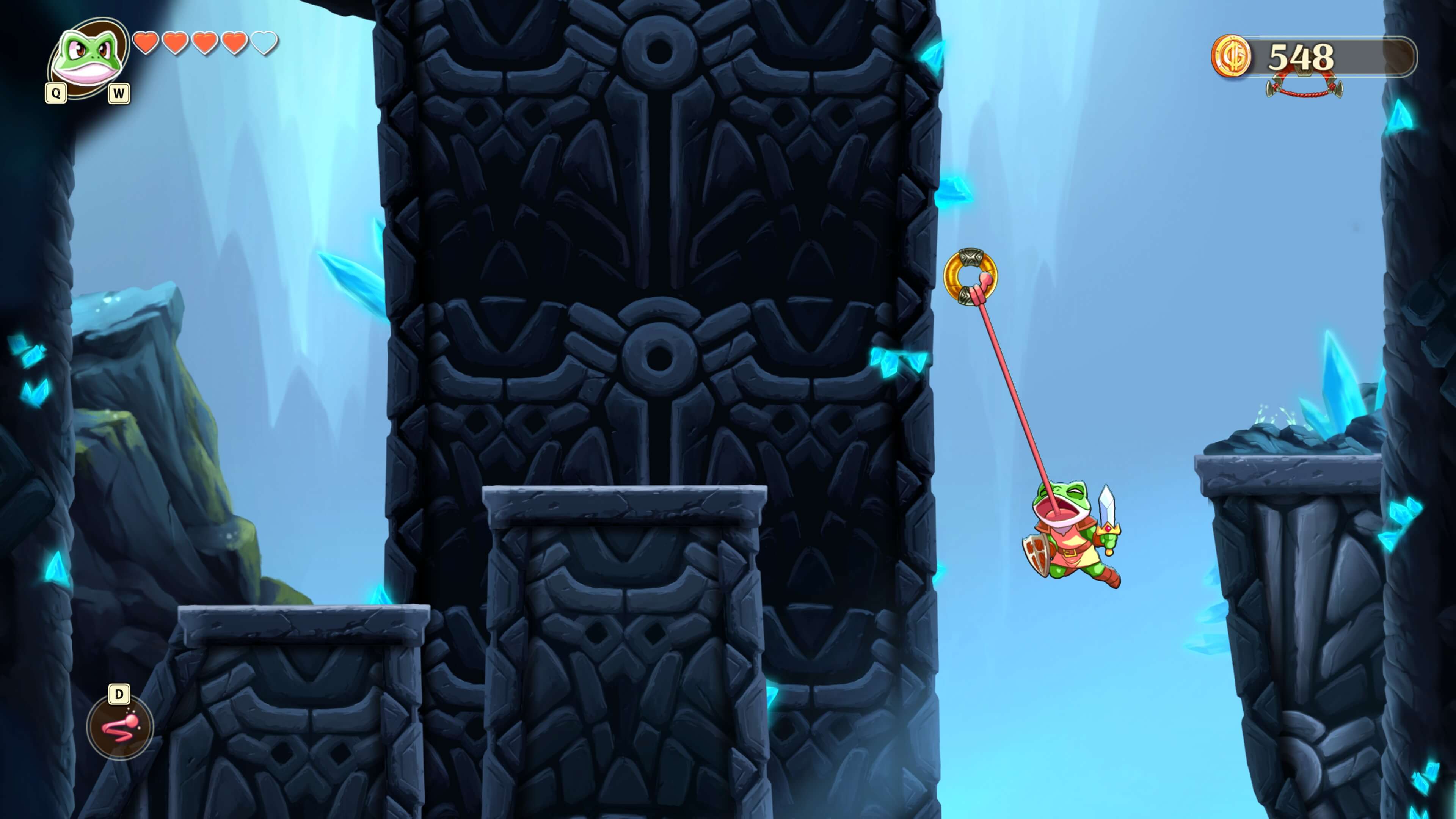 The snake specialises in sliding up and down non-horizontal surfaces which is pretty neat, but his venom-spitting attack became somewhat redundant for me towards the end of the game. The dragon… well he flies and belches out fire pretty much par for the course. It is with the dragon where Monster Boy took the opportunity to introduce a few brutally difficult ‘bullet hell’ sections while flying.

Monster Boy combines all these abilities into a single, cohesive experience that results in some excellent platforming gameplay. It is rather satisfying to switch between characters on the fly, and in so doing combine their talents for solving puzzles, defeating bosses, or to reach secret areas. Now factor in that you can augment these abilities with armour or weapons, and you have all the makings of a multi-faceted platforming adventure.

A Thing of Beauty

What will really knock the socks off newcomers and seasoned fans alike are, of course, the visuals. This game is so vibrant, so colourful, so vivid, that you will probably see imprints of the screen left behind on your corneas after closing your eyes.

I mentioned earlier how the gameplay is a fusion, which could also be said for the visuals. You can tell that the art style has an unmistakable anime foundation in character design and certain animations. Yet, there is obviously also a slight Western cartoony influence involved with the visual aesthetics, and they work together here in a truly slick and beautiful manner.

Monster Boy’s lively visuals have been complimented by an equally jolly soundtrack that combines upbeat, almost arcade-y tunes with the classic sound effects from 80’s platformers when you pick up coins, run over a checkpoint, find an upgrade, etc. This game is the very auditory and visual embodiment of happiness, which, on a personal level, was a welcome contrast to the dark and sombre JRPG’s I always seem to be stuck in.

A Thing of Anger

After reading all that you will be excused for forgetting that I actually ended up disliking Monster Boy. So let me try to elaborate on where this game lost me, and in so doing explain my surprise for why these issues were seemingly overlooked by reviewers upon the game’s launch on the Nintendo Switch in 2018.

The overarching problem I had with this game can only be described as Monster Boy’s tendency to repeatedly throw inconsistent difficulty spikes at the player. If you add up all the time I struggled my arse off just to get past one enemy or a particularly tricky jump, it would almost rival all the rest of the gameplay. To put it another way, Monster Boy likes to pull ‘dick moves’.

On top of bad checkpoint locations, the game features some moments of awful enemy placement. For example, during one level I found myself in a sloping and tilting shipwreck, which means I had to be wary of things rolling around. This was fun until I reached a section where there were bats hanging from the ceiling that swoop down onto the player with their attacks.

What should have been one brief moment took me nearly twenty minutes to clear because you have to jump upwards and towards the bats to get past them. Unfortunately, our hero is completely vulnerable during his jump animation, and it doesn’t help that Jin’s shield only seems to work when it feels like it.

Two hits from the bats and you are dead, and there are four of them to get past. Did I mention you will also be placed right at THE BEGINNING of the sequence if you die? It is impossible to regard this as an engaging challenge when such moments just smack so clearly of artificial difficulty and silly level design.

The boss fights, on the other hand, are great as you will be expected to use your different animal shapes and each one’s unique ability to conquer the behemoths. However, I again found myself screaming “dude, what the hell!?” when I discovered this game refuses to replenish your health after defeating most bosses.

Matter of fact, you will mostly respawn with half your health at the last checkpoint, which can actually make progression really difficult when a tricky section lies soon after. A seriously weird design choice that the game doesn’t really benefit from, or need, really.

Last issue worth mentioning is that several puzzles – particularly those that enable the player to progress – were a bit unimaginative. I felt like the solution came to me through trial and error (or just blind) luck rather than requiring me to rack my brains. For example, some puzzles literally make you do platforming to find a switch or object in the dark… why? Like I sad, dick move.

What is so strange about Monster Boy and the Cursed Kingdom is how these really abysmal and frustrating moments appear smack in the middle of truly great segments of gameplay. Just as you start getting comfortable in the momentum of your game… your flow comes crashing to a halt as Monster Boy throws a totally pointless curve-ball.

Still, I will give Monster Boy and the Cursed Kingdom a tentative recommendation since the game can still offer a rewarding experience to those willing to endure its faults. While these frustrating moments represent the downfall of clumsy-handed gamers like me, I suspect those with more patience (and certainly faster reflexes) will look upon these finicky sections with more endurance.