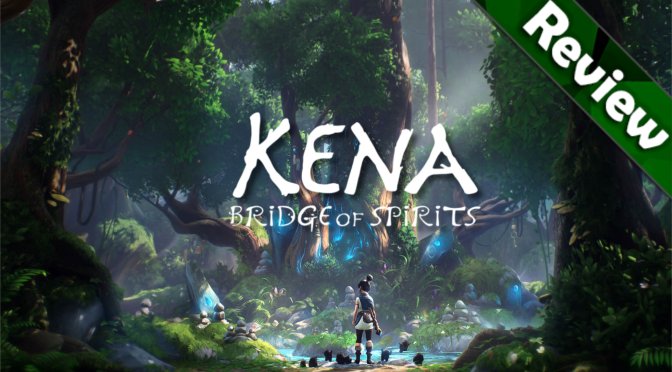 Kena: Bridge of Spirits is the first venture into video games by animation studio turned developer, Ember Lab. In the weeks prior to launch, there were some concerns. We didn’t get many gameplay trailers, and there was a review embargo until launch day. I saw these as worrying signs. However, after playing Kena, I’m happy to report that it’s been a great experience, even with some minor technical issues.

You play as Kena: a spirit guide tasked with helping stuck spirits move on. You travel to an abandoned village in search of the sacred Mountain Shrine. On your journey, you discover that corruption has taken over the valley. As such, you’ll need to find out why this has happened and how you can stop it.

The story, while not entirely groundbreaking, is enjoyable and good for the most part. Key moments are told through expertly animated cutscenes, and the voice acting is appealing. However, Ember Lab shoehorned in an interracial lesbian relationship involving two story NPCs. Apparently in 2021, all games need this “diversity & inclusion” box checked purely for the sake of having it.

Kena is visually impressive, with vistas that are quite something to behold. The movement & combat animations are equally good, which I suppose should come as no surprise since the game comes from an animation studio. The sound is excellent, but the dialogue volume is a little lower than the music in several sequences. Thus, it was difficult to hear what the characters had to say during some scenes. The soundtrack is great as well. It perfectly suits the game’s overall “adventure-ish” nature.

The gameplay in Kena is nothing new and relatively simple, drawing aspects from many other titles. Moving around is similar to pretty much every other 3rd-person game. You can jump, double jump, dodge roll, and block/parry, as well as the ability to hang on and shimmy along certain ledges. You have a light attack and a heavy attack. You can also unlock the ability to use your staff as a bow, for which the arrows recharge over time.

Combat revolves around performing short combos, shooting weak points with your bow, rolling around, and blocking when needed. Fighting normal enemies won’t pose much of a challenge. Some enemy attacks are too powerful to be blocked, so you’ll have to evade them. Kena also mixes up enemies a little. For example, an early-game “miniboss” may appear more frequently in the later stages amongst normal enemy spawns. Thus, encounters get more challenging as you progress into the game, but they never become TOO hard. Overall, it’s not a particularly deep combat system, but it is entertaining… at least for a while.

There are also challenge-chests located around the map that will spawn specific waves of enemies that you must kill to unlock the chest. Aside from this, enemies only spawn at specific places. Once you kill them, they won’t respawn (take THAT, Far Cry 2 & 6).

Every zone culminates in a major boss battle. I quite enjoyed these. They offered a new challenge and were fun to play. The exception was the last boss fight, which featured several phases. Dying in any one of the phases meant restarting the entire encounter from the beginning. This grew tiresome for me.

As you progress through the game you get points that can be used to unlock new moves and abilities. You get new attacks, increased arrow capacity, and the ability to throw a spirit bomb. In addition, you have a resource based around “rot” (explained below) that charges by killing enemies. You can unlock different rot abilities that can be used in combat. Unfortunately, these upgrades barely change the flow of combat since Kena’s enemies aren’t particularly varied or challenging. Still, it’s nice that you can fight in various ways.

Throughout your journey, you will find “rot.” Rot are small cute black furry creatures that follow you around in the game world. They can help you solve puzzles, and collecting a certain amount of them can unlock combat abilities. You can also equip each of them with hats, but hats are purely cosmetic. They don’t bring any gameplay/stats enhancements. While this rot-hat-fashion is cute in the beginning, the charm and novelty of it wore off quickly for me.

Kena is a linear game (for the most part) with a small hub. There are a handful of areas that you will unlock and travel to, including the hub. The developers have described the game as a “wide-linear” experience. What this means is that there are a few hidden areas off the main path in each zone that will contain rot hats, crystals (to buy more rot hats), meditation areas (to increase your max health), and spirit gifts (to unlock more houses within the hub).

Admittedly, I didn’t find all the game’s secrets, but I found a fair amount of them. Most of the loot is crystals. As noted, crystals are used exclusively to buy hats. Since I wasn’t motivated by more hats, I didn’t feel incentivized to go out of my way to find more secrets. In addition to this, and once I had unlocked all the rot abilities for combat, there was even less reason for me to search for hidden areas. To its credit, Ember Lab added multiple item indicators on the map screen that will help the completionists out there.

Puzzles are fairly simple in this game. There are some platforming puzzles where you can cause rocks to float and rotate them by shooting at them. You can also shoot crystals in the correct order to make some doors open or move stone blocks to reach certain places. For the most part, these puzzles are pretty easy, though some of them can be vague (two come to mind) and require a “trial and error” approach to complete them. Since puzzles are not a huge part of the game, they don’t really hinder its pacing.

I had some technical issues with the game during my playthrough. There was a bug or two, but nothing game-breaking. The game ran in slow motion (for no apparent reason) twice, and I had to restart it to fix it. There was also one section near the end where the performance dropped to sub-50FPS, but this only happened in a very specific location. Overall, I was able to maintain 60FPS @ 1080p with Max Settings for most of the game on my setup (system specs at the bottom). The game could benefit from further optimizations, and some of you may encounter performance issues at higher resolutions.

The cutscenes are rendered at 24FPS. As such, the drop from the silky smooth gameplay to the choppy cutscenes can be somewhat jarring. Thankfully, someone has rendered out the cutscenes at 60FPS, and you can download this mod from here. I personally used this mod shortly after starting the game and did not notice any “anomalies” or issues with the animations. I recommend using it as it greatly improves the transition between the gameplay and the cutscenes.

I should also note that the mouse controls felt a bit awkward, especially when using “Forest Tears.” There is definitely room for improvement here.

Playing through Kena’s campaign will probably take you around 10-20 hours, depending on how much you explore the environments. The game took me around 15 hours to finish, which felt like the ideal length.

All in all, Kena: Bridge of Spirits is a great game and a memorable experience. It’s very polished, especially if we take into account that it’s Ember Lab’s first project. However, there isn’t much incentive to replay it (apart from unlocking harder game modes). As far as pricing goes, $40 USD is too high for what you are getting, in my opinion. The game is also exclusive to the Epic Game Store, which may put off some of you. Regardless, if you have your eye on this type of game, Kena is worth picking up, especially if you wait for a sale.