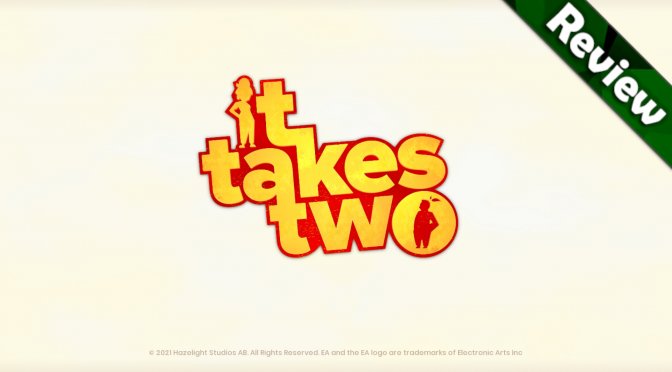 Two-player co-op titles can almost trace their origins to the birth of the gaming industry, and It Takes Two plays like a collective tribute to all their best features. As the newest release by the co-op wizards at Hazelight Studios, this is an extremely creative and well-crafted package that takes the most enjoyable features of a game tailored for two, and amplifies all of them to deafening levels.

The secret sauce that puts It Takes Two into the platinum league of co-op titles is how director Joseph Fares and his dev team have prioritized a sense of variety. To classify their latest release as a ‘puzzle-platformer’ is not strictly wrong, but this omits how the game unfolds in an ever-changing nature throughout its (roughly) thirteen-hour campaign.

As such, It Takes Two was certainly one of the most interesting and refreshing experiences I have played in recent memory. This game makes a genuine effort to offer a new activity and dynamic content at every turn, and my playthrough was every bit the whimsical adventure as the story of its two protagonists. We have something truly special on our hands here.

The plot begins with an introduction to May and Cody – a pair of squabbling parents on the verge of heading for splitsville. Their heated exchanges make it clear that the former lovebirds are on the rocks, and any hope of reconciliation is out of the question. They decide it is time to break the news to their young daughter, Rose.

After the brutal heart-to-heart, Rose makes a beeline to her hiding place in the garden shed where she takes a book – ‘Dr Hakim’s Book of Love’ – and handmade toys resembling both May and Cody. Here she begs the caricatured miniatures to use the book’s knowledge, and thereby save their doomed marriage.

Unbeknownst to Rose, her tears invoked a spell that caused May and Cody to awaken as their doll counterparts, and Dr Hakim manifests through his book. The quarrelsome duo therefore set out on a quest to return to their bodies, and the talking love textbook with the sultry accent knows just the trick to reverse the spell.

The bad news is that May and Cody must first prove to Dr Hakim that they can fix their floundering holy matrimony by overcoming its most fundamental weakness: Working as a team. May and Cody’s journey from the woodshed back to the house therefore becomes a highly practical form of relationship therapy as their very survival depends on cooperation.

In all honesty, I was… apprehensive about It Takes Two’s setup at first. Building a game’s plot around heavy subject matter such as divorce and a small child’s struggle with this reality sounds like it has no place being in a co-op game. This is a genre that has always sold itself on being lighthearted and fun, and sharing a game based on such dreary source material could end up feeling a little awkward.

Fortunately my concerns were unfounded because the gameplay treats May and Cody’s predicament as something they must overcome, and not as existential angst that must be thrust onto the two players. In other words, this is not a game about divorce as It Takes Two is more interested in focusing on the couple’s task to work with one another, and thereby crafting fun and absorbing two-player gameplay from this idea.

It Takes Two adopts the classic gameplay of two small protagonists making the dangerous but exciting journey around your average suburban house. The difference is that Hazelight Studios have given this trope a dose of ‘Alice in Wonderland‘: It’s more like the petit duo have entered the magical, fantasy reality of Rose’s imagination.

For instance, in the game’s earlier segments May and Cody climb an enormous tree after discovering that a branch leads directly into Rose’s bedroom window. As you’d expect, this section starts with a platforming section where the duo hop from one twig to the next, and it even includes moments that require swinging with a grappling hook. Fun, but not unexpected.

Once they go inside the tree, however, they stumble into the midst of a territorial war between a squirrel army (complete with a war-hardened general squirrel), and a swarm of ferocious wasps. After being convinced that May and Cody are not enemy spies, the squirrels agree to help the couple reach the bedroom window in exchange for their help with bringing down the wasp queen (who also happens to be a robot because… why the hell not).

What follows is an incredible expedition through the enormous military bunker carved inside the tree by the warmongering squirrels. Players will fight the wasp army and other insects in one cavernous room after another, and later sections have players riding on a barrel lid through a river flowing on the inside of the tree.

Every chapter across It Takes Two’s campaign heads down a similar wacky rabbit hole to the point where I often forgot how May and Cody even arrived in that moment. The trip through Rose’s bedroom somehow ends with fighting a giant baboon plushy in outer space, and entering a cuckoo clock leads to a epic escapade through a time-bending palace made of glass, metal gears, and springs.

This may seem like a very disjointed game on paper, but the constant thrill of experiencing something new is precisely what makes this crazy adventure so much fun. By creating each chapter as a mini, self-contained gameplay segment, Hazelight Studios could draw on almost any mechanic they wanted.

Most importantly, this varied design in the gameplay makes It Takes Two unique in this genre.  Most two player co-op titles out on today’s market either give each of the characters a unique ability in how they solve puzzles and engage in combat (such as Darksiders Genesis for example), or, alternatively, both players experience the levels in the same way as the two characters are basically clones (like, say, in Unravel 2).

It Takes Two is one of the select few games that incorporates both types of these designs. Both May and Cody share talents to double jump, sprint and dash (all of which control like a dream), but the game also gives each of them unique McGuffins for every area that they visit.

For instance, in the aforementioned ‘space baboon’ level May dons a pair of anti-gravity boots and Cody straps on a belt that either makes him grow into a giant, or shrink down to the size of a bug. What follows is a marvelous experience where May walks freely on the ceiling and walls to reach remote switches or navigate tricky parts of the terrain.

Cody, on the other hand, contributes by shoving heavy objects out of the way in his colossal state, and getting through tiny spaces is a cinch after he deflates to his mini form. And yes, he deflates – he literally farts himself smaller.

Bear in mind this is only a sub-section of one chapter, and going through everything players will encounter in the diminutive duo’s story could easily fill an entire book. As if this was somehow not enough, there is also a liberal scattering of various party games and mini challenges in every chapter, and they exist solely to provide just a quick, fun side activity.

Regardless of whatever May and Cody might be doing, It Takes Two consistently excels in the most important area of this particular genre: Making players feel connected. Whether solving a puzzle or taking down a boss, most of the gameplay scenarios give each player a distinct but equally important role to play, which means that communication and cooperation is crucial. In short, this is playing ‘together‘ in every sense of the word.

It comes as no surprise that Hazelight Studios have made full use of the Unreal Engine 4 to bring this incredibly ambitious title to life. Closer inspection soon reveals that their game boasts surprisingly detailed textures and almost Pixar-grade animations in cut scenes, but the levels’ vast sense of scale was a personal favourite of mine.

As hinted earlier, almost every set piece in this game can only be described as humungous, and it is quite possible to loose your co-player in certain areas! At least these huge levels leave cool things to discover (in particular those mini games I mentioned earlier), and it was a nice touch that most puzzles often make full use of these open spaces.

A new yardstick for co-op

I remember reading somewhere in It Takes Two’s pre-release marketing that Joseph Fares offered $1000 for anyone who could prove that they didn’t have a good time with this game. “Poor fool” I thought, “Do you not comprehend the level of trolling you are about unleash upon yourself?”

For this reason, It Takes Two should perhaps be regarded as the prime example of this genre, and I must give this game my highest recommendation. Given that you only have to buy one copy to play between two players, Hazelight Studios proves that sharing a good game with a friend lives at the very heart of their new masterpiece. I cannot wait to see what this studio will make next.