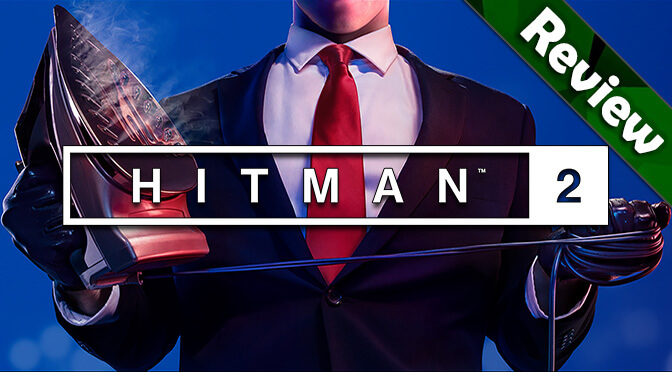 It was many years ago that I first played as Agent 47, and I found the game series interesting but a bit too slow in how you must have the patience to wait for the right moment to kill your designated victim. I know, I know; these are stealth games so they have to be slow-paced. Given the pacing and my lack of skill in this genre, I’d just dabble in prior Hitman games back when game magazines would come with demo discs and such.

The only truly positive experience I had with Hitman until now was Hitman movie at the cinema. Even if the movie didn’t receive good marks I enjoyed it and I found it engaging, but we’re not here to discuss about the quality of movies-based-on-games.

Sixteen years after the first Hitman 2, it’s time to see if I can have a positive experience and stealth-succeed at this new Hitman 2.

All this creates such a powerful draw, getting me fully engaged into the action, ready to direct Agent 47 towards his target. However, I actually find myself preferring to stay close and admire the panorama: a marvelous grey sky reigns over a beautiful beach, with the wind breezing by Agent 47’s bald head.

There’s so much wonderful attention to detail. Far away, in the distance, an exquisite modern villa can be seen. That’s the place I have to go to find someone to kill. The beginning tutorial is well-implemented, being unobtrusive, and clearly explains how to do what is needed with unnecessary information.

In addition, the minimal user interface lets me focus on the world itself to find my purpose, objective, and relevant distances and markers. This clean display is great for honing in on the real purpose of the game: the hunt.

Thanks to the excellent tutorial, I know how to gently switch off any camera around the villa, how to overcharge control panels, or how to break into blocked places. So I stealthily proceed into the villa.

To get in, the garage door seems useful: overcharging the switch, it opens without any issue. But in front of me, two corpses are on chairs meaning the owner doesn’t want guests. But apart from the silent duo, nobody seems to be at home.

Inside, somewhere the key information must be kept about my target and perhaps the mysterious Shadow Client, which claims to know everything about my/Agent 47’s past. It’s time to explore and investigate!

First up is my target, Alma Reynard, a dangerous environmental terrorist with some shadowy connections I need to know about. Searching her PC turns up some files, and then she arrives back home with some friends. This isn’t good!

I must remain silent because I need to work (aka kill her) without being noticed. Perhaps I should wait until she showers à-là-Psycho? Or perhaps another less disturbing method?

From this tricky multiple choices situation, it’s already clear that choosing the method of murder is a difficult and huge part of the strategy of Hitman 2.

Remember how I said I’m not one for slow-paced stuff? My chosen method is to shoot her as soon as she enters the house. BANG, shot in the forehead (headshot!) from a distance! Then I run away as fast as possible to some bushes by the beach. I proceed to disguise myself as a guard and take the boat to safety.

So there is the first mission. It seems easy in retrospect. What you didn’t see was the frequent saving in combination with helpful autosaves, which allowed me to finally, after many attempts, complete the mission.

In thinking about my first mission, sure, I didn’t use as much stealth as possible, but that’s the strength of Hitman 2: it gives the player creative freedom. There’s so many variables to study and options to plan. And then there’s the actual playing out of the plan, which usually goes off track and requires improvisation.

More experienced players will find many of these missions quite simple probably, but the game does continue to offer new challenges to test your skill as much as you desire.

For instance, the second mission, in Miami, has two targets, a mess of people, many NPCs, numerous costumes for disguise, lots of eyes on you, and tons of guards. This chaotic scenario creates a great contrast to the first mission and gives a nice rhythm to the game.

Each mission continues to deliver a nicely recreated location around the world: from New Zealand to Miami, Columbia to India, and Austria and beyond! Each area is a “sandbox” to play with and structure the best strategy to kill the targets.

There’s such diversity of playstyles here. Each mission can be completed in dozens of different ways and can also be replayed to find the best mix of solutions. The more creative the player is, the more points the player will gain.

You can learn much about the world if you desire through not only the initial mission briefing but also listening to hundreds of NPCs chatting about everything, useful or not. Taking time to really study and listen is another great way to enjoy the game.

Drawing fully from the first Hitman reboot, there are episodes but they’re released as a whole game this time. No longer being forced to wait for the next content release makes the game feel more complete, which makes spending money on it feel more reasonable.

Hitman 2 also includes two new game modes: Sniper Assassin and Ghost Mode. The first one gives you and one other player the chance to play together for a common objective, working as a team.

The second mode is a challenging mode where you have to be quicker and better than your rival in killing your targets. What makes this second mode interesting is that you and your opponent are located in two different identical copies of the same game world.

And if you’re like me and haven’t played the first Hitman reboot, buying the Legacy DLC lets you play the “old” maps from the previous game in Hitman 2. This is a nice way to enjoy the first game’s missions in the second game.

The only great flaw is the menu: aesthetically speaking it is great, but from a user point of view it’s a little bit of a mess. Some options are hard to find and can slow down the process of getting into the action.

A few other issues are noted in the Cons list below. There’s some time limited content, which is unfortunate if you want to play on your own schedule. Some missions can get a bit long.

Hitman 2 may seem like an ordinary mission-based game, but it’s more than that: it offers so much quirky and creative gameplay moments. Stalking NPCs while they chatter on about life. Wandering around role-playing as a mechanic. Changing clothes in the bushes.

It’s certainly not a game for everyone, but for those creative players with plentiful patience there’s something very rewarding here. There’s a lot of slow downtime, but that makes the high intensity payoff moments all the more fulfilling.

This is a must have for the fans of the genre and the series, but even if you’re a “newbie” like me, you’ll notice that there is nothing out there like Hitman 2. I’m still playing the game, and I really want to discover every little detail of the game, enjoying all the cities on offer.

Hitman 2 is a unique game without much competition. It can teach you how to kill an important finance genius, who’s also a terrorist, while you wear a clown suit, and how to love and appreciate all of it.

Playtime: 30 hours total (and counting). Mathieu has not completed the game, but he’s still playing!