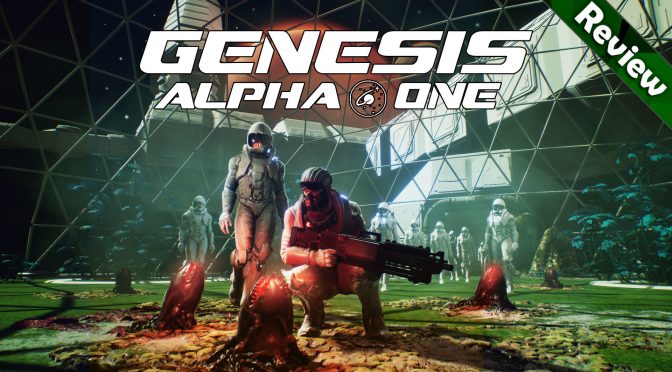 There was once a time when I dreamed of designing video games; I think most gamers do as kids. While this dream ultimately evolved into working in IT, it still left me with a soft spot for indie games/studios. I am usually a bit more forgiving when independent titles lack a little polish, so long as the core framework is there. Genesis Alpha One both captivated me and tried my patience at the same time. Genesis Alpha One is a Resource Management/ FPS game where your one goal is to find a Genesis candidate and start life anew. You are the last hope for humanity, but after the journey… are we even still human?

You are the captain of your vessel, a human clone who has been assigned to the task and if you die, you take your ship with you (unless you have a re-spawn chamber). As captain you must gather resources, clone additional crew members, and research the necessary technology to colonize a new world. You’ll navigate the stars looking for floating chunks of space garbage and dead planets to mine out until you are ready or until the machinists kill you.

You can always tell when a game is made in Unreal Engine by inexperienced developers…. everything is reflective and light sources are placed in locations that just seem to constantly blind the player. Fortunately this title is one of the better ones, but there is nothing that truly sets it apart visually from any other space shooters. It isn’t terrible by any means, just boring.

So Much To Be Done

One of the redeeming factors of the game (in a way) is that you can seamlessly switch between an FPS view and a ship overview. That way you can easily make additions to your ship without going to a terminal just to make those changes; HOWEVER you cannot do that with any other action that must be taken on your ship. This means that if you want to start a new expedition or manufacture more ammo, you’ll have to run to the room in order to execute that action. This gets incredibly tedious the more you play the game. While there is lots to research and discover, these actions play such a crucial role in your day to day that it takes a lot away from your ability to enjoy the game.

Rouge-Lite Does Not Mean Inconsistent

I expect any game with perma-death to be inherently difficult. Developers who advertise perma-death as a selling point typically scale the game to be difficult, but usually this is a gradual change with the occasional “bad luck” situation. This was not the case for Genesis Alpha One. In each of my 8 playthroughs I found myself growing bored as I played the roll of exterminator, crawling through the vents of my ship to kill vermin, only to suddenly be boarded by a faction of space pirates resulting in my untimely demise. Once the machinists find you, it is almost impossible to shake them unless you have some serious firepower. This makes progression near impossible if you don’t spawn in a resource rich parts of space, because if you venture out far the machinists are guaranteed to find you.

The ultimate goal of Genesis Alpha One is to eventually find a suitable planet to colonize and prepare your crew and biosphere, but after you land, that’s it, game over. Then, you can just do it all again while running a different scenario, which is the case with a lot of games in this category. The major difference here is that there is no real variety between the scenarios other than your starting equipment. This greatly reduces the enjoyment of replaying the game.

A Valiant Attempt That Falls Short

While Genesis Alpha One was a bit tedious at times and the worlds that you embark upon often run together, it is definitely a breath of fresh air when it comes to resource management games.  It is a different take that I definitely enjoyed running through, even if it falls a bit short.