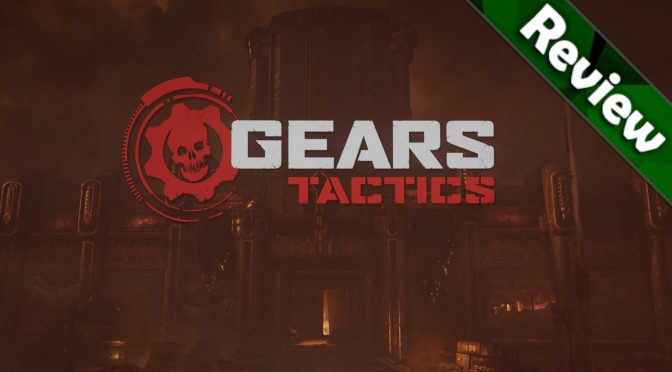 With 2006’s Gears of War, Epic Games had crafted one of the most influential blueprints for a third-person shooter, one that has barely changed for more than a decade. Despite receiving some flak over the formulaic nature of the combat, all six mainline entries still find their roots in the classic, over the shoulder greatness that defines some of the most addictive action in gaming history. But what if the world of Gears could offer a completely different experience?

By joining forces with developers Splash Damage, The Coalition have taken this franchise out of its fourteen-year-old, third-person comfort zone, and created Gears Tactics – a full-blooded, turn-based tactical game. Overall, this new entry in the Gears universe is a great combination of everything that made the original series iconic, with some of the most enjoyable mechanics this newly-adopted genre has to offer. In short, the best of both worlds.

All in all, you’re just another COG in the wall

It is while playing Gears Tactics that I was reminded why this series truly is the natural habitat of the Unreal Engine (fourth one in this case). It is something in the way this engine renders graphics and the visual design of a Gears title that works like the perfect synthesis in gaming.

Indeed, Gears Tactics is every bit as aesthetically impressive as its 3rd person predecessors, with sharply detailed textures, generous particle effects, intricate environments and solid sound design. As executive producer Alex Grimbly said, the dev teams wanted Tactics to look and feel close to other AAA Gears entries, with the only real difference being a higher camera angle.

Cut scenes have therefore received the same cinematic treatment as with the previous two entries. While some hilariously poker-faced NPC’s pop up in certain moments, this game strives to tell its story in deep and dramatic cinematography, which includes a solid performance by the voice cast, and facial animation worthy of a standalone movie.

The story depicted in these intermissions takes us all the way back before the events of even the first game, so we are in prequel territory here. Gears Tactics plays out one year after the Locust Hoard popped from the ground (i.e. twelve years before Gears of War) as a small band of COG soldiers hunt a Locust version of a mad scientist, named Ukkon.

While Ukkon himself is new to the franchise, his abominable creations, such as the Brumak and the Corpser, have long since made our lives hell throughout previous Gears games. Someone crazy enough to think up a Brumak – basically a dinosaur-like beast strapped with missile launchers and chain guns – obviously represents a huge threat to the COG way of life, so our heroes Lt. Col. Gabriel Diaz and Major Sid Redburn launch an operation to end Ukkon’s shenanigans.

While Redburn and Diaz are total badasses, Ukkon remains an invincible opponent for just two COG soldiers (not least because he can somehow regenerate his cells). A part of their mission to defeat Ukkon therefore includes driving around their tank-like APC, recruiting new soldiers, and gathering supplies. It is within these smaller missions that the gameplay unfolds.

Gabe Diaz is of course the father of Kait Diaz, protagonist from the most recent two games, and Gears Tactics therefore uses its overall plot to fill in more gaps about Kait’s rather mysterious past. I appreciated how developers have integrated this game with other entries, and the story of Diaz and Redburn’s hunt for Ukkon also feels like it serves a purpose within the overall gameplay.

Welcome to the machine

As the Oracle said to Neo in The Matrix Reloaded: “So, let’s get the obvious stuff out of the way”.

If you expect me to declare that Gears Tactics reinvents everything we know about games like Xcom, Mutant Year Zero or Valkyria Chronicles, then I must disappoint. For the most part, the devs have played it very safe in terms of how they designed the gameplay, and they borrowed extensively from mechanics established by more well-known titles from this genre. Truth be told, The Coalition and Splash Damage may want to check their inbox for a few very angry cease and desist letters…

In case you are unfamiliar with a tactical role-playing game, the easiest comparison to describe games like Gears Tactics is a game of chess. Either the player or the enemy takes turns against each other, and every unit is given a set number of actions determined by ‘action points’ (usually three). Actions points count how often during a player’s turn their unit can take a shot, reload, throw a grenade, activate a skill, and so on. A turn ends after all action points have been spent.

Like most games of this sort Gears Tactics features a combination of main story missions that the player must complete to progress, and side missions that offer a selection of different scenarios. Main missions are typically straightforward skirmishes against the Locust, but side missions are always built on a particular modifier. This could range from an advancing barrage of bombs that fall after every turn, or rescuing human hostages within a limited number of turns.

It’s pretty standard TRPG stuff, but Gears Tactics quickly reveals that reinventing the wheel was never this game’s intention. The devs obviously have a keen eye for this genre’s best ingredients, and they brought these mechanics to life within the one thing that will undoubtedly attract most players: The world and content of the Gears of War itself.

It is almost weird that The Coalition didn’t think of trying this sooner given how a Gears of War game already comes with everything you need for a turn-based tactics game built-in, particularly the I.P’s setting. The COG home world, Planet Sera, and its war-ravaged environments make the perfect playground with chest-high walls for taking cover, desolate buildings to navigate, and complex open spaces that allows ample opportunity to flank enemies.

The Locust themselves also make excellent material for this kind of game since their AI behaves much like their third-person counterparts. Wretches and Tickers for example move fast over large distances and still focus on flushing units out of cover, whereas Boomers, on the other hand, are still the same hulking brutes capable of taking and dishing out tons of damage. May The Divine have mercy on your soul if one gets a clear shot at one of your units.

If, however, your squad manages to take down a Boomer, a unit gets the opportunity to pick up its absurdly overpowered gun, and you almost feel sorry for the remaining enemy soldiers. In fact, the camera’s birds-eye view of firing a Boomshot or a well-placed grenade into a group of encroaching Locust drones somehow makes the infamous Gears of War goriness feel even more viscerally satisfying.

It is not just the savage way in which you come out on top that makes completing missions so rewarding. In the same way as the enemies, the developers have also used the iconic weapons like shotguns, mulchers, and Lancers from the Gears franchise to make up the different character classes.

Each unit’s stats – damage, health, shooting distance, special skills and so on – has been balanced intuitively with the other squad members, which makes tactical squad work not only an important facet of the gameplay, but actually enjoyable. Knowing that strategic teamwork gave you the edge to win makes it feel like you didn’t just outgun the Locust: you outsmarted them.

I will concede that Gears Tactics is certainly more forgiving in terms of the overall difficulty than some leading I.P.’s in this genre (even on normal difficulty), but it is by no means a cake walk. The Locust are not oblivious to the advantages of teamwork and their AI will constantly work together to pin your units down either with snipers, or with the ‘overwatch’ ability (almost an exact copy from Xcom). The points where they drop in are also randomised, so don’t think a checkpoint reload is necessarily a Get Out of Jail Free card. 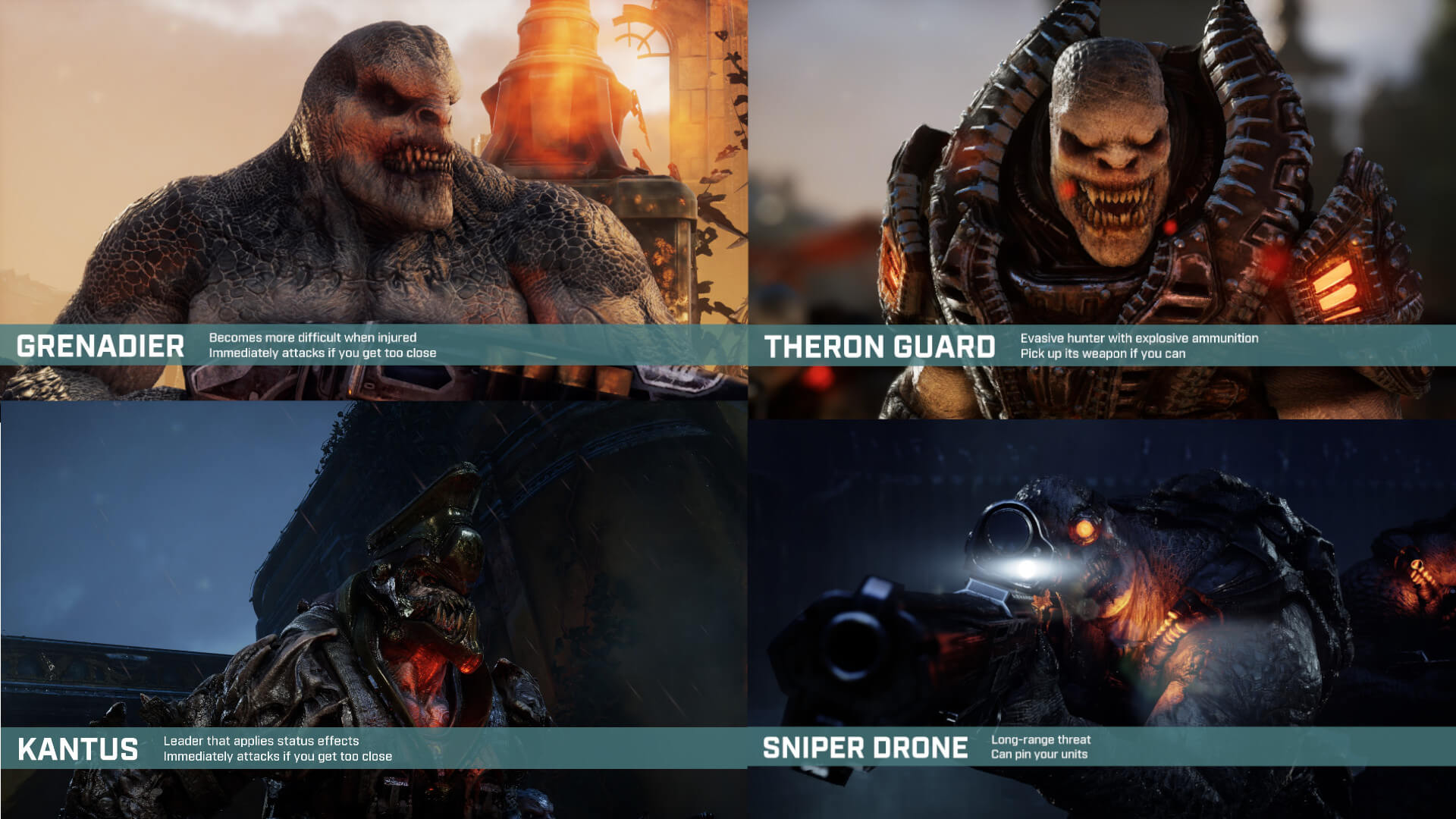 To help the player get into the nitty gritty of their strategy, Gears Tactics comes with an engaging character customisation suite between missions. Here you can spend skill points to endow characters with special abilities (such as the ability to force all units in a given radius out of cover) or swap out armour and gun modifications for passive perks (like higher accuracy or more health).

There is also a basic cosmetic modifier. Honestly, I was up to the early hours of the morning changing the colours, camouflage, hairstyles, and accessories of my squad because this is so cool. I ended up choosing the ‘forest’ camo, with beige as a primary colour and sandy yellow as an accent colour. It looked awesome, but I just wish the female characters had their own hairstyle options because they all look like permutations of Britney Spears during her meltdown.

Let me conclude with things I didn’t like. The controls are a bit fiddly and unintuitive since I often gave commands by mistake to the wrong character, or I had to click multiple times to get a specific squad member to do a particular action. It would have been nice if the game would let you set more default commands to save some time, especially since there is no option to turn back these oopsies. DO NOT, I repeat, DO NOT play this game with a controller: Mouse and keyboard is best.

By far my biggest problem is the game mechanic of chance that sits at the core of most tactical turn-based games, and it is best to illustrate this issue with an example. Say you have an injured sniper, and a ticker gets dangerously close. Even if you have a clear shot at them, it is not guaranteed that you will actually hit or kill the ticker due to how the game’s background number generator works. Ticker explodes, sniper is dead. Mission failed.

See, due to the enemy’s close distance, the game’s rules bring the sniper rifle’s accuracy from a 100% chance to hit to, say, 18%, which means your unit will probably miss… at 20 feet… with a scoped sniper rifle. This is so stupid, and a squad member failing a direct shot just because you lost a game of dice can really bugger up your progress. This mechanic of chance is a long-standing problem in this genre, and it is most unfortunate that this game also inherited it.

I also had to deal with atrocious load times, but I will give this one a pass since my gracefully aging PC (sans SSD) is probably partly to blame. I was, after all, playing with everything maxed out, so I guess my patience was somewhat rewarded.

All in all, I think this is an amazing game and you should totally play it. Tactical turn-based games tend to remain a niche genre because these titles can be overly complicated, and they come down hard when you make mistakes.

Gears Tactics counters this on two fronts. As I mentioned, it is not quite as convoluted as the most popular options of its genre, which leaves more room for newcomers to familiarise themselves with the ins and outs of tactical turn-based games.

Additionally, millions of fans have been a part of the Gears of War world for more than a decade now, and Gears Tactics offers its new exploration of gameplay within the framework of the original series. The adjustment will be easy as pie if this is not your first time taking on the grubs.