I was really wondering how to begin writing this Review. Should I say that Duke Nukem Forever is finally here with us? “No shit dude, we can already see it” would be the answer from most of you. Should I say that I was not impressed with the low scores from all other gaming sites? It’s too obvious. Should I say that we won’t have our classic April’s Fool joke from this moment on? Hmmm, perhaps I should invent another one, like Duke Nukem Forever & Ever. Or should I say that it was not worth the wait? Nyaaaaah. After all, you can see its score so you should already know the answer. Perhaps I should borrow the lyrics of a Greek song: ‘What? Tell me what? I don’t know what to tell you. It was the end of an era!’

That’s right. It’s the end of an era. The end of a game’s development that was already doomed to fail. And I should be stricter with it. Who can forget Broussard’s statements that this would be the best game ever? If this is indeed the best Duke Nukem game, then I am the master of Godzilla. The funny thing is that the scripted 2001 trailer of DNF seems far better than the final version we actually got. Seriously now, it’s a mess.

I assume I should start with the game’s story. OK, let’s be honest, the story of Duke Nukem Forever is not its best feature, as it doesn’t try to impress the player with its complexity. Therefore, it’s only natural to have low expectations for it. So, the aliens are back after Duke kicked their ass. This time, however, the president thinks that the aliens come in peace. He’ll command Duke to hold his horses, but as you’d expect from Duke, he’ll do whatever he wants. After all, it’s his way or… hell, it’s only his way. After shouting that he has some ‘Baaaaaaaaaaaalls of Steel’, Duke gives the finger, and the battle begins once again.

Technically, the game is average at best. Those interested can take a look at our Performance Analysis. The game uses an advanced version of the Unreal 2.5 Engine and features a lot of low-resolution textures. The biggest gripe we had, however, with Duke’s latest adventures, is the horrible Depth Of Field effect that was used. There are occasions where you literally can’t see anything at all. This is by far the worst blurriness effect we have ever seen. And we were really disappointed with the absence of some effects that would add to the IQ and atmosphere of the game, like soft particles. Thankfully, the body awareness is great, there is a nice dismemberment system, there is limited destructibility and the game features the best use of SSAO. However, these little touches won’t be enough to win both old-school fans of Duke Nukem and all those newcomers. 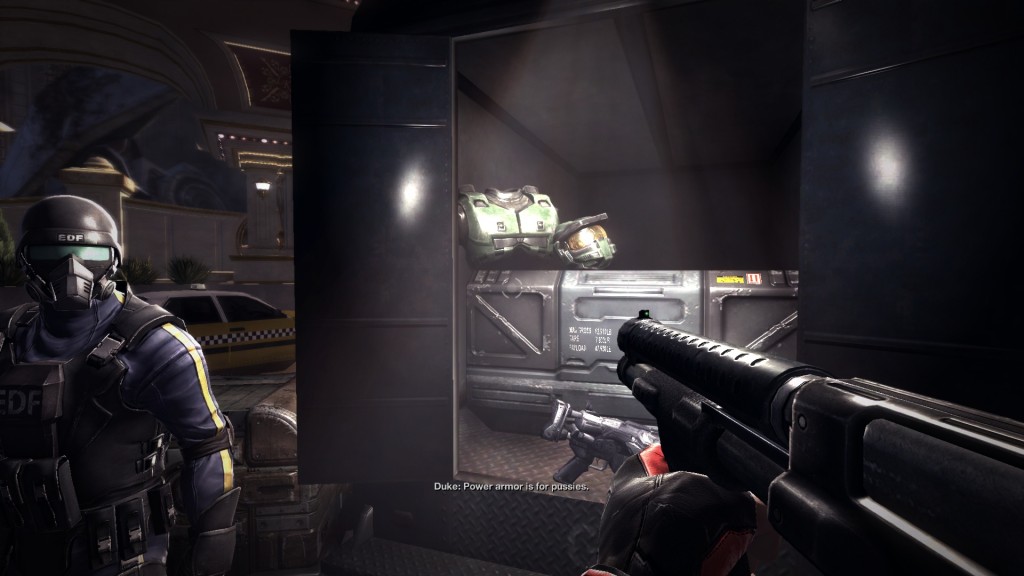 And we really have to wonder why John St. John was so bored during his voice recording. Where is the passion that was obvious in the voice acting of Duke Nukem 3D? John’s voice act is cold and soulless. The same applies to all other characters. Generally speaking, the game feels soulless. If there is one thing that tries to save the day, this is definitely the reference to all other well-known franchises, like Halo or Half-Life. Oh, and Megadeath. Apart from these, all other special effects are good but nothing worth writing home about.

Moving on to its gameplay, we can immediately notice that things are not as ideal as we’d hoped to. Although some might say that its gameplay deserved to remain the same, I really have to wonder. Did ‘Duke Nukem 3D’ restrict your weapon arsenal to two weapons? Did ‘Duke Nukem 3D’ limit your rocket launcher to five rockets? Was there a checkpoint saving system instead of a proper save/load mechanic? Could Duke regenerate his health? Did it have QTE’s? Seriously, guys, what has happened? It’s sad but the truth is that 3D Realms tried to bring Duke to modern age, and that didn’t work out. It’s also sad that the company borrowed the worst features of our modern day first-person shooters. And that’s precisely why the game feels dull and average at best.

On the other hand, I have to admit that I liked the game’s opening. The stadium fight brought back some memories, and the whole ‘gun-less’ intro reminded me of Half-Life. Oh, and I also had the pleasure to play both my pinball and my pool. From then on however, the game gets repetitive. Go there, kill these aliens, solve a simple puzzle and do it again until you get to the boss. This repetitiveness is also due to the mediocre level design. Since most stages feel ‘empty’ and have nothing to intrigue your interest, it’s only natural to get bored while playing the game. The only stages that are worth mentioning are those where you have been shrunk. Those stages are amazing and it feels like they were built from some other, more talented team. And I’m pretty sure you’ll love them. In fact, these stages will be the only thing that you’ll still remember when you finish DNF.

The Multiplayer features four gaming modes. Those are: Dukematch, Team Dukematch, Capture The Babe and Hail To The King. As with the consoles, the PC version supports eight player matches. The first two gaming modes are our classic Deathmatch and Team Deathmatch. Hail To The King is similar to ‘king of the hill’, while Capture The Babe sees two teams (4 versus 4) in a race to capture the babes of the stages. Think of it as Capture the flag, only instead of flags you have to capture babes. Theoretically, the MP mode sounds good. However, the MP in action is not as engaging and fun as you’d thought it would be. 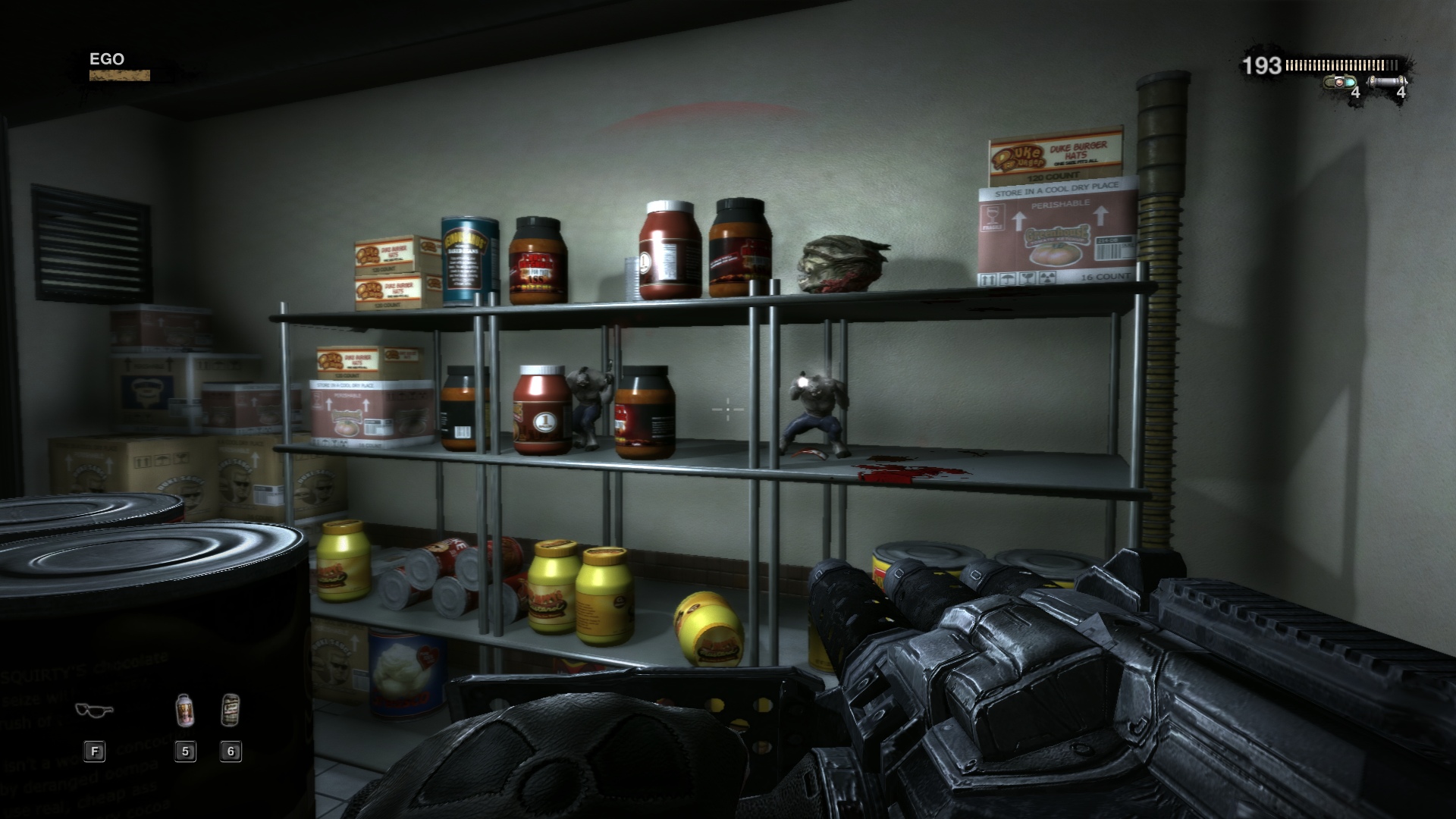 All in all, DNF feels average at best. It’s quite sad, give the fact that the game was in development for almost 15 years. Like most gamers, we are nostalgic but this is not how Duke Nukem 3D was back in the days. 3D Realms lost its way and tried to implement the worst features of modern FPS’. Its graphics are average. Its gameplay is nothing breathtaking and has so many limitations and restrictions that have a negative impact to the whole gaming experience. To be honest, Duke Nukem Forever feels like a low-budget game from gaming studios like City Interactive. Ironic, isn’t it? This doesn’t resemble at all 3D Realms’ golden days. It’s an epic fail or as you may have already read… it’s a Fail To The King, Baby!

-Graphics and Sound
-Failed to modernize its gameplay
-The voice acting
-Regeneration health; Two weapons; QTE’s; Checkpoint saving system? Are you kidding me?
-It won’t be next year’s April’s Fool joke