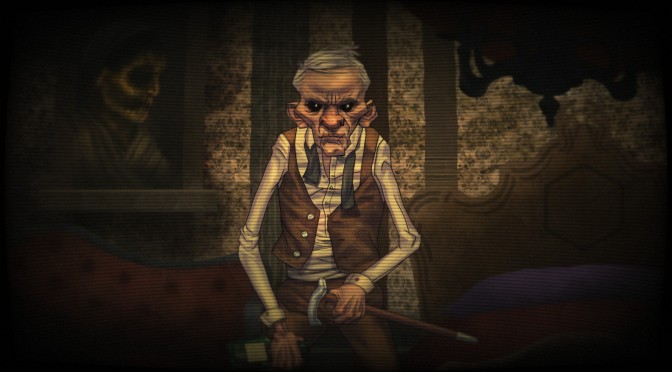 Masochisia is a point and click horror title developed by independent developer Oldblood. Masochisia is not an easy game to swallow and is not for the faint of heart because it touches on some really dark and often disturbing themes. There is good reason for the 18+ only warning before starting this game.

When we were asked by John if one of us wanted to review this title I happily volunteered because I played a lot of point and click adventures growing up and even playing the genre today gives me a feeling of nostalgia. I cleared out my schedule Friday afternoon so that I would have plenty of time to play through Masochisia without any distractions, because I didn’t want to break from the immersion that these games often provide if they are written well. I can definitely say that Masochisia is very well written. The unspoken narrative drives the player to want to just sit down one day and play the game from beginning to end, this being entirely possible seeing as it only took me roughly 3 hours to finish it.

The art style is very unique and is also quite important to how the story is told because it sets the atmosphere before you learn anything about the “narrator” or their background. The backdrops of the game look as if they were done in water color and have soft edges. The characters in the game stand out as they look like they were drawn with a fine point marker.

Originally I was going to make a video to accompany my written review as I usually do, but I found that hard to do without spoiling any of the story or giving away the answer to some of the game’s puzzles, that and re-watching some of recorded gameplay made me feel uneasy. Which brings me to my next point.

Masochisia on the surface although well written will come off as, just disturbing and unnecessarily violent, if player does not understand some of the underlying themes. There are a lot of clues placed throughout the game that would be a dead give away to players who have an interest in Psychology, especially to those who live in the US. But if one does not pick up on these themes they will be left very confused and likely won’t be able to appreciate the game for what it is. Fortunately with a little intuition and a couple Google searches the average player can find out all they need to know on truly how well written this game is.

All in all Masochisia is a well written game that can be enjoyable by many fans of point and click titles. I feel like the price is a bit steep for a game that only takes 3 hours to complete and that is including the time it took me to figure out some of the more difficult riddles. I can’t recommend it to all of our readers as I imagine that it will have a pretty limited audience as far as who will actually enjoy it. But if you enjoy point and click games and are looking for a story driven horror title. Then you should definitely pick this one up.