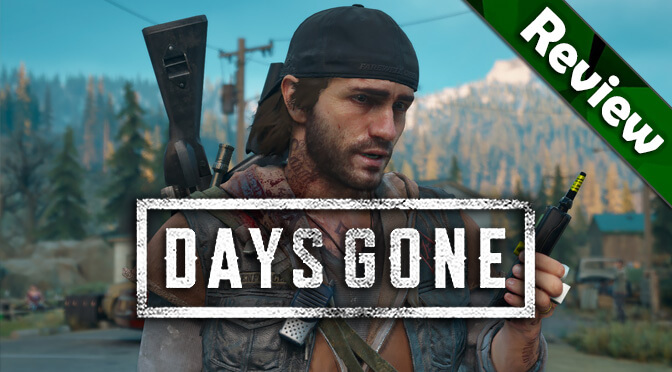 Days Gone is a narrative strong, open world zombie game first released exclusively on PS4 in 2019. Now on PC, the game behind this rock-solid, ultra-smooth port is basically a quality amalgamation of Grand Theft Auto, The Last of Us, Far Cry, and Red Dead Redemption. As such, many players may find the game too familiar and clichéd. For those willing to dig deeper, Days Gone sets itself apart with its compelling story about loss, grief, vengeance, and coping with the aftermath.

The bulk of Days Gone is the usual open world gameplay loop. Travel the map, clear camps, find collectibles, and get upgrades. Tying together the locations are Grand Theft Auto style missions. An NPC will offer you a quest, often with a quality cutscene adding story context. With this motivation, you then drive off on your motorcycle to complete your objective, which usually involves typical third-person cover and shooting mechanics. It works just fine.

The setting is one of post-apocalyptic zombie land, set in picturesque Oregon. Lush environments with teeming zombie hordes and equally deadly humans make for a poignant yet gruesome world. There’s also a ‘wild west’ feel, which is where the comparisons to Red Dead come in. Some of the shootouts and animal hunting scenes could easily be mistaken for Red Dead Redemption 2 at a distance.

Overall, the game design is very reliable and capable, but there’s no escaping the obvious copying of other games. At least Days Gone borrows from great titles and imitates them quite well. And the production quality is off the charts. The physics, animations, lighting, and other technical elements like weather systems are so incredibly impressive.

Moreover, the artistic attention to detail is fantastic. Beautiful locations. Crisp textures. Well-shot cutscenes. Strong direction and acting. It all works so well. Plus, the experience is almost entirely free of bugs or other glitches. Truly, Days Gone feels like a real labor of love by the developers, which is why it pains me so much to discuss the following.

While a technical achievement, Days Gone also features dubious design decisions, mostly based around the tricky word: realism. Much like many of us faulted Red Dead Redemption 2 for its tedious elements, Days Gone is also fixated with unfun systems. Consider the two biggest annoyances: refueling and repairing.

Other games have implemented fuel systems for vehicles, but they usually make the actual process fairly streamlined. Not so with Days Gone. This game insists that you get the ‘authentic’ experience of manually refueling your motorcycle. I’m talking about scouring buildings for fuel cans, walking back to your bike, and literally watching a slow refueling animation over and over and over.

I understand that the fuel system is supposed to draw the player into the experience, but it undermines the very enjoyable open world joys of exploration and going off the beaten path. It’s like the game mocks you, saying, “Not so fast, buddy, you don’t have enough fuel to have that much fun.” And sure enough, all new players will run out of gas eventually and perhaps curse the developers as fools (fuels?) for implementing such an exhausting (pun intended) system.

Equally annoying is the bike damage/repair system. Doing fun stuff like catching air and landing or running over zombies damages your bike.

With enough damage, you must stop and drearily repair your bike. If you don’t have enough scrap for the repair, then you’re all out of luck and must walk (or load a prior save game).

To add insult to fuel-injury, for the first chunk of the game your stamina bar is laughably meager. Your character will become winded nearly constantly, like a person with severe cardiovascular issues. You can eventually upgrade your stamina but not before a fair amount of panting, wheezing, and being torn apart by zombies that you can’t outrun. Sounds fun, right?

I should also mention that these monotonous systems require equally tedious and finicky button prompts. Hold F to open. Hold F again to loot. Hold F to stand your bike up. Hold Spacebar to refuel (and you better be positioned perfectly). Hold Spacebar to drop the fuel can. Hold on to your sanity if you can.

Overall, Days Gone creates a time-waster gameplay loop of scrounging items, slow walking, stopping, fueling, repairing, and being very careful about your driving/playing habits. In other words, Days Gone forces the player to do things the player doesn’t want to do. That’s a cardinal sin of game design. Just let me explore freely! Let me run over zombies! Cut out the non-stop ‘Hold’ and ‘Tap’ button prompts!

One could quite honestly conclude that during development most of the developers of Days Gone devoted themselves to making an enjoyable open world game, while a select few (likely in charge) ill-advisably shoehorned in these Motorcycle Maintenance Simulator aspects, in some realism fever-dream.

Frankly, I don’t care about motorcycle maintenance, and I get my fill of refueling vehicles in real life! In the end, these systems needlessly burden Days Gone’s real selling point: the narrative. Speaking of…

A Tale of Loss, Grief, Despair

Much like how The Last of Us isn’t really about combat or zombies, Days Gone essence goes much deeper, too. The true, lasting attraction is the human element—the compelling expression of emotion through quality acting, motion capture, and writing. And Days Gone nails these elements, with some of the most convincing cutscenes since, well, The Last of Us or Red Dead.

The hero of the story is Deacon St. John (Deek). Despite an outwardly rough biker persona, his heart is a complex mix of competing feelings. Over the course of the game, we are given a personal look at Deek’s unfolding inner world as new emotions come out as his beliefs are tested.

Joining Deek are a roster of excellent supporting characters. All are acted and voiced extremely well. Their mannerisms and motivations are mostly believable and on point. Nearly all quests are tied together narratively, building upon each other. It’s a wonderful way to tell a tale.

Days Gone is also quite lengthy, more like a saga than a short story. Plus, Days Gone’s reflections on loss and resentment and anger are powerful. Major kudos to the narrative, writing, character, and voice teams. It’s been a while since a game’s story has drawn me in so much, calling on me to relate and empathize with the characters.

However, to reach the narrative highs the player must slog through much of the tedium spoken of earlier, which brings me to my final thoughts.

Even though Days Gone has a message worth hearing, few people will find its mostly formulaic and often tiresome gameplay to be enough motivation to spend 40-plus hours playing. Still, a select group of players will become very emotionally attached to Deacon and be drawn in by the incredible, top-notch narrative presentation.

I, personally, found myself in this latter camp. Yes, the first five to ten hours were a slog (bike maintenance!), but by the time I’d invested around 20 hours into the game, I was seriously hooked. After leveling up and clearing much of the map, I could finally focus on the compelling drama unfolding throughout the rich, beautiful physical landscapes.

By the end, I left loving this game. We just get so few big-budget video games that believably present a compelling story about emotionally difficult topics like coping with loss and grief. Plus, I eat up well-crafted open world games.

However, if you want a game that respects your time and works to maximize your fun, Days Gone isn’t recommended. Furthermore, if you’re not someone who enjoys seriously reflecting on how trauma shapes human development, you might not connect so much with the story. Nevertheless, it takes all kinds, as they say, and I’m personally very glad Days Gone exists and is immortalized on PC in such stellar fashion.

In conclusion, Days Gone appears to be a bland imitation of other, better games, but those who open their hearts to the weighty narrative may come to truly love and appreciate the soul of Days Gone and the inscrutable charms of Deacon St. John. But loving Days Gone means coming to terms with its tiresome design decisions, and I don’t begrudge anyone for not wanting to work that hard.

Playtime: 48+ hours total. Nick spent about 45 hours finishing the story campaign. Another 10 hours will be likely needed to reach 100% completion. Then there’s an extra ‘Challenge’ mode to fool about with for maybe 5 hours. Nick might consider doing a high-difficulty New Game Plus playthrough down the road.