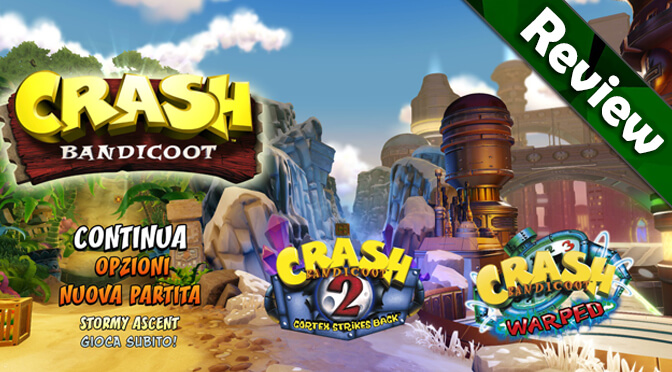 Crash Bandicoot, the lovable late 1990’s creature and video game series, has now spun its way out of the blocky polygon past and into 2018 in full remake fashion. This newly-branded N. Sane Trilogy features beautiful graphics, excellent PC performance, and all the still-maddening old-school jumping mechanics one could ever want!

But before we review the game itself, please let me indulge in sharing with you my own very personal story of Crash. It’s been many years since I met him last, and if I can recall correctly it was…

I’m 7 years old. My life’s not complicated. I attend elementary school, hang out with friends, and do my homework. I study just a bit in order to have more spare time to play video games . My mother’s cousin, about 15 years older than me, is the one who introduced me to everything gaming related. He’d show me all the newly released games and gadgets, which, being 7 years old, I naturally couldn’t afford.

We lived in two different buildings, and every time he had something new to show me, like news, images, videos, or actual games and consoles, he’d invite me to his place. He’d often invite me during my dinner, and my mother was not very happy about that. But she’d allow me to go after quickly finishing my dinner (except for the broccoli). So I’d quickly get dressed for public with a jumpsuit, run down the stairs, go to his building, ring the bell, and enter his home.

It is the ’90s, and all the companies, video game related or not, are trying to appeal to a younger audience by modernizing old mascots or creating new ones: the tiger on the box of Frosties now has a bandana around its neck, Sonic wears sneakers, Warner Brothers’ characters are playing basketball alongside Michael Jordan to save the universe.

Like he usually does, my cousin calls me to tell me he has something great to show me and to be there as soon as possible. He has a mobile phone, the latest consoles and the most powerful PC I have ever seen. In addition, he also has one friend who runs a video games store, here in Milan.

With his influence he provides my 2nd grade cousin with the latest products, only slightly delayed here in Italy compared to the rest of the world. And among all the stuff this store has, there’s a PlayStation in the shop window.

More amazingly, I find out that my cousin has his own PlayStation at his house! That’s why he called me and that’s what this “something great” is all about. I can’t wait. I fly down the stairs and do the usual ringing of the bell, running up to the first floor, and entering.

Here, as usual, my great uncle and great aunt are in the kitchen, finishing dinner, and I stop for a few minutes to say hello. Then I walk towards the room where the PlayStation is, breathing that strange mix of smells coming from the moquette and the pot-pourri my great-aunt leaves around the house.

When I arrive in THE room, the PlayStation is there, waiting for a CD to be loaded. CDs… for me, a 7-year-old, CDs are the Big Thing! And the room is actually full of CDs, that one friend at the game store has given my cousin lots of games to try on the PlayStation.

And there is this Crash game, a platformer sort of like the other games I’ve played, but one thing is all new to me: this interesting character called Crash Bandicoot.

Even though I don’t know what the heck a Bandicoot might be, he’s so appealing with his wide grin, huge red sneakers, cool blue shorts, and carefree personality! When I finally play the game, reality strikes me: this game is very difficult. Even with dozens of live, losing them all happens so quickly.

As a 7-year-old, the plot isn’t too interesting. It’s the usual “save the endangered girl” situation. It’s just an excuse to make you progress through each crazy level. What amazes me most is the fully 3D graphics!

In any case, and no matter how hard I try, I am not able to finish the game. I can barely beat the first boss and then it gets too difficult for me. To see how the game unfolds from here till the end I use some cheat codes and passwords – at least to have an idea of what it was all about.

Even though I couldn’t finish the game, Crash Bandicoot has remained in my mind, and it will always stay with me forever because it was such a powerful time in my gaming life. And who knows, maybe some day in the future I will be able to finish it…

Over twenty years later now and there’s news all over the Internet of Crash Bandicoot being remade for the PlayStation 4. This announcement makes me so happy! I’ll now finally (probably) be able to play it again and even complete it!

Unfortunately, I decide I probably won’t play it. I’ll only play it if it is the pure, original game because the original Crash was made by the co-founders of Naughty Dog (Uncharted, Last of Us), so it is very important to me the game isn’t some “reimagined” game we so often get these days.

Obviously, the game’s pre-orders are doing incredibly well, since people are eager to be reunited with their beloved Crash again. However, for now I do not want to try it. Maybe I will some day in the future once we know what we’re getting.

A year after the N. Sane Trilogy came out on PS4 – and sold hundreds of thousands of copies – it is now coming out on other non-Sony platforms! Crash on any other platform than PlayStation? Blasphemy! However, here we are with it now coming to Xbox One, Nintendo Switch, and PC. Finally, everyone will be able to have the joy of Crash Bandicoot on their preferred platform!

Being a PC gamer now, I can finally play Crash at 60 FPS, not that annoying 30 FPS console stuff, and on the PC everything looks more vivid and detailed naturally. So now I am set to complete what I began in 1996. It’s time to enjoy the game, despite the fear that it might ruin my childhood memories.

The good news is this remake is truly a ground-up faithful recreation using modern technology, featuring all three original games with tons of content. The bad news is the outdated and unbalanced gameplay is also faithfully recreated.

On the bright side for me, it wasn’t just my young age that made the game so challenging. The game itself is unforgivingly tough. Even with dozens of lives, you lose them very easily as you mis-jump and mis-step through the often fiendish level designs.

There is no doubt that this game requires you to replay many segments over and over to memorize the correct movement patterns of each enemy, obstacle, or trap in order to complete each level.

This hardcore brute-force gameplay may be a rude awakening to all of us who are used to the smoother modern gameplay designs, and if you don’t have the strong nostalgia and emotional connection to Crash, this game may be far too punishing for you.

Although the gameplay remains mostly identical, there are some quality of life changes. A few old issues have been fixed, making things a bit more accessible and smooth. You can now use the analog stick, and it’s easier to jump and spin. You can use the keyboard and mouse, but a gamepad is definitely recommended.

An autosave feature saves after completing every level, which frees you from the old-school trouble of constant manual saving. Another interesting touch is the character Coco, who (thanks to a time machine from the third game) can travel back to the first and second games to play in some levels.

With the PC release the game is finally unshackled from consoles. As noted above, the game is a detailed delight to behold running at a nice 60 FPS. The console versions have to cut back visuals but on PC there are no sacrifices. Shadows, details, anti-aliasing. It’s all maxed out, and Crash’s fur is looking more beautiful than ever!

There’s about a hundred levels, which will keep you busy for a long time. As you play and beat the boss levels you get closer to facing Dr. Neo Cortex and saving the charming Tawna, our protagonist’s fiancée.

To make things worse, it should be noted that this remake is actually harder because of the technological advancements! The physics are more realistic than ever, and now things like slipping on wet surfaces are even more aggravating than it was on the original games. Expect to die often, especially if you’re new to Crash.

To conclude, for me and thousands of other fans, Crash Bandicoot N. Sane Trilogy is a dream come true: revisiting our beloved Crash & friends with fully realized modern graphics. All of this without the complications of using PS1 emulators or actual Sony consoles.

Let me end on a personal note. Upon starting the remade first game I was filled with the same enthusiasm I had more than 20 years ago. As I went back in-game to the very room where I first met Crash I was deeply moved. I felt the game was exactly how I left it, but it was like my memory had morphed the game into something modern and gorgeous, something perfect and timeless.

So I want to thank Vicarious Visions and Activision for the great remake package. These remade games are like time capsules, transporting us back to the late 1990s, back to my childhood. Thank you for giving me the chance to once again explore the world of Crash!

Thanks to the N. Sane Trilogy, we hardcore fans can finally forget all those bad PS2, Gamecube, Xbox, and GBA titles because this package brings back not only a game series but an icon, himself. Crash Bandicoot is back and better than ever but still kickin’ it old-school!

Playtime: 53 (and counting) hours total. Mathieu completed the first game and is playing the second and third.