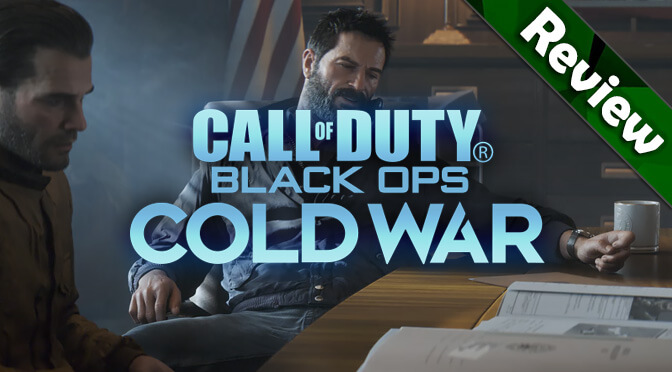 Call of Duty: Black Ops Cold War is an extremely solid Call of Duty. You get a superbly stylish spy-style single-player campaign with dialogue choices, optional missions, and multiple endings. Its multiplayer mode is sprawling-but-typical, with a few excellent new ideas. Moreover, this year’s Zombies Mode is arguably the most accessible Zombies Mode to date (though it lacks content, at least for now).

Altogether, Cold War is a great package, if you enjoy Call of Duty, that is. It even runs well on PC (if you have a powerful machine) and features tons of customization options like an FOV slider and dozens of interface and graphical tweaks.

So there’s a lot to love, if loving Call of Duty is what you like to do. If you’re not sure of your devotion, let’s break down the game’s three modes, beginning with my personal favorite.

Let me say it straight: I love, maybe even adore, Cold War’s campaign. I love creating my own character with unique psychiatric traits. I love the attention to detail and tie-in to the original Black Ops story from 2010. I love the perfectly rendered 1980s tone and visuals.

I love the dialogue choices, side missions, and optional objectives. I love examining evidence and cracking codes between missions. There’s a thoughtfulness required that’s rarely found in Call of Duty. All of this makes things feel more grounded and honest.

What I love most is the immense heart of the campaign. For so many years, the Call of Duty stories have been by-the-numbers and dull, but this ‘on-the-brink’ spy thriller tale is told with such style and confidence. It almost dares the player to not like it, and I can’t help but love it.

Probably a large reason the campaign has amazed me is because of who made it. Raven Software, the creators of truly brilliant and unique games like Singularity (play it if you haven’t!), were brought in, and I believe they poured their many years of pent-up creative talent into this project.

To balance my effusive praise, I admit the overall run-time is short, only 5-6 hours. This is typical, though. There are also a few instant-fail stealth sections, and some levels are the usual run-and-gun affairs.

All these negatives are made up for by the immense immersion-factor of the overall story. You have fun spy gadgets like cigarette-box listening devices. Sometimes you’ll use your old-school camera to snap pictures of intel in real-time while playing, and some intel can aid you in other missions. It’s great fun considering that very few games have made me feel like a spy, especially a Cold War spy.

Add in choices and consequences and multiple endings and you have a brilliant campaign that can be played at least two or three times to try out all the branching paths. It’s just a darn shame that Activision doesn’t let you buy the single-player portion separately for, say, $20 USD. If that were the case, I’d demand you all immediately buy it or face extreme interrogation, Soviet Russia style.

But alas, the corporate suits (capitalist swine) at Activision have shackled the story to Multiplayer and Zombies, insisting you pay full price, whether you want it all or not—because that’s the American way. Speaking of questionable behaviors, let’s delve into that bastion of civilized societies, known as Call of Duty Multiplayer lobbies.

As far as Multiplayer… well, Cold War is mostly what Multiplayer Call of Duty has always been. For some, another year of Multiplayer, marked each November, is a nearly religious experience offering the higher promise of Prestige (read the complex, official ‘brochure’ to begin your indoctrination).

For me, having literally played this same game formula starting a decade or so ago with Modern Warfare 1, 2, and 3 (and Black Ops 1 and 2), I no longer see the obsessive appeal of hundreds of hours of the same old thing each year (my last CoD-venture was 2014’s Advanced Warfare).

Still, there’s decent fun to be had, and for the prodigal veteran player, returning to Multiplayer is like a nice, warm cup of CoD-nostalgia (Codstalgia?). But for fresh players, the young pups just starting out on their spawn-die-respawn-kill-and-rank-up journeys, there’s a lot to enjoy, and I won’t begrudge anyone’s burgeoning addiction.

Despite my crotchety views, Multiplayer isn’t all a retread. A ‘Combined Arms’ 12v12 mode with vehicles is basically Battlefield but faster and more polished. One map, Armada, where you must navigate between various sea vessels on the ocean, is also a real standout. Even I, a ‘de-programmed’ CoD-drop-out, was smiling and enjoying myself as I jet-skied, zip-lined, and even swam to victory. I won’t say I ‘saw the light,’ but I can see myself playing this mode off and on for the next few months just for kicks.

Down to brass tacks, some will take issue with the limited map count. There are eight standard maps that support the usual 6v6 game modes (Team Deathmatch, Domination, Kill Confirmed, and so on). Three of those eight maps are playable in the aforementioned (and excellent) ‘Combined Arms’ 12v12 mode.

Another two maps are for the new battle-royale-lite mode called ‘Fireteam’ with 10 teams of four. To be honest, though, I find this mode to be miserable with random teammates (but I hate battle-royale games, in general).

Regardless, Activision has promised all post-launch maps (Multiplayer and Zombies) to be free. So I don’t mind the paired-down map offerings at the moment.

I also should give special credit for Cold War’s robust Multiplayer customization and unlockables. If you’re into this type of thing, you can spend ages tweaking your playstyle. The exceptionally faithful can even apply shiny, neon-colored ritualistic paints upon their most sacred weapons. So there’s that.

Zombies: More Fun Than It Should Be

I’ve always loved the idea of Call of Duty’s Zombies mode ever since the original in 2008’s World at War. But many of the releases have felt subpar to me. Weak animations, bad gunplay, questionable hitboxes, annoying spawning.

Well, Cold War’s Zombies is, in my opinion, the most polished and accessible Zombies mode yet. It feels much better than prior years, and there are some excellent quality-of-life improvements, like the option to escape to victory (exfiltrate via helicopter) at rounds 10, 15, and so on.

Another excellent addition is the permanent stat boosts purchased between rounds, as you slowly accrue enough special crystals over many sessions. It gives an extra sense of purpose to otherwise repetitive attempts.

I also greatly appreciate that I can use my “Create-a-Class” Multiplayer load-outs for Zombies mode as well. Even better, player and weapon XP is shared between Multiplayer and Zombies, avoiding the feeling of missing out on leveling while decimating the undead. Both these smart changes create a rewarding, unified play-experience.

Yes, there’s only one map at launch. People have quickly pointed out how weak this is compared to prior entries releasing with multiple maps. But again, Activision has promised new maps will be free, so I don’t honestly mind having this first month or so with one map to hone in on.

Also, like last year’s Modern Warfare, Cold War supports Cross-Play between all platforms. For Multiplayer, a console player has to purposefully join special ‘keyboard and mouse supported’ lobbies, and no console player in his or her right mind would do that (unless to play with a specific PC friend, I suppose). But for Zombies mode, PC-console Cross-Play makes perfect sense and is wonderful!

I want to heap praise on Cold War for being quite the technical feat. Visually, the game is stunning, and on PC, you get oodles and oodles of graphical, interface, and accessibility customization options. It’s almost insane how many menu options are provided, so good for Activision for finally giving PC players a rock-solid port. I darn well remember how poorly the first Black Ops ran on PC literally 10 years ago. So it’s about time…

On the more annoying side, yes, Cold War is only available on Blizzard Battle.net, or whatever they are calling it this week. Everything installed fine for me, and the platform is passable, with Cold War at least featuring in-game Achievements, for those who like that kind of thing (I do!).

But the lack of Steam’s many extra-game features is annoying. Oh well…at least the Battle.net exclusivity means Activision takes nearly all the profits and passes zero of those savings on to us, the consumer… wait… uh… my CoD-faith is faltering! Moving on…

On a different note, much has been said of the new ‘sound engine,’ mostly driven by the new console generation’s promises of superior audio. But the audio didn’t sound too special to me.

You know what’s lame? “Double XP” events. Some of us have lives and can’t adhere to strict “play when we say” orders. But these types of marketing ploys bring in more players, I’m sure. Sigh… I miss the old days before these events.

There’s also a significant amount of product placement during the campaign (Mountain Dew, Doritos). Granted, it’s the 1980s versions of those products, but yuck!

Sure, Zombies is fun, but I miss the good old ‘Spec Ops’ two-player modes from Modern Warfare 2 and 3. I don’t think Call of Duty has ever been better than having a buddy control an AC-130 overhead while you make your way through a farm field, clearing out buildings below, circa 2009’s Modern Warfare 2.

Speaking of two-player modes, there’s a two-player Zombies “Onslaught” mode that is exclusive to Playstation for an entire year. What an abomination. In no world should this be acceptable.

There are Multiplayer Custom Games with configurable rules, which is nice for clans or groups of friends.

Multiplayer also includes Bots, but the bots are limited to basic modes like Free-for-All and Team Deathmatch (and no XP accrues).

Cold War has a menu option to skip the “Introduction Movie” (boring logo screens) each time the game starts. Every video game needs this option.

The re-creation of a 3D, walking, talking Ronald Reagan is insanely impressive. Does it make the game more enjoyable? No. But a group of artists, somewhere, spent ages working on that. I salute them.

By the way, Activision has promised to update the existing free-to-play Warzone battle-royale game (exclusive to Battle.net, of course) to implement the new Cold War theme, meaning a new map and weapons, most likely. But I hate battle-royale, so whatever.

If you’re newish to Call of Duty, I do believe Cold War is a great entry into the series. There are hundreds of hours of fun here, but some of us already spent those hundreds of hours of enjoyment over the last dozen years. For me, if I hadn’t gotten this game for free to review, I couldn’t justify buying it at full price. Seriously, though, if you ever get a chance to play the campaign, do it—it’s so good!

Playtime: 15 hours total. Nick completed one campaign playthrough in about 6 hours and got the ‘less than happy’ ending. He’s begun a second playthrough. The rest of the time was spent on Multiplayer and Zombies.
Computer Specs: Windows 10 64-bit computer using an Intel i7-3930k CPU, 32GB of memory, and a nVidia GTX 980 Ti graphics card. Game installed on a WD Black SN750 NVMe SSD.