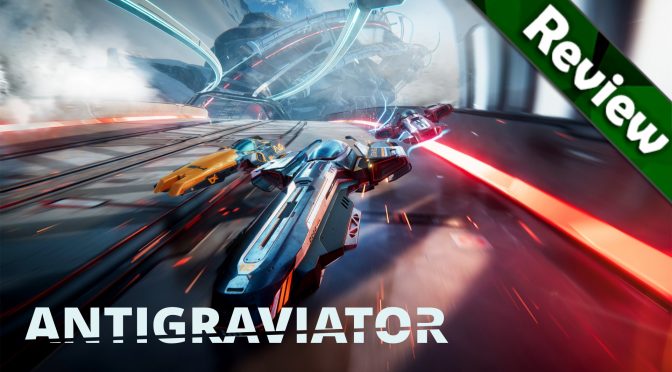 Antigraviator is a futuristic anti gravity racer that joins the ranks of games like Wipeout, Formula Fusion, Redout and other similar titles. The question is whether or not this new entry has managed to capture the essence of what made games like Wipeout great. The answer is yes…and no. There are many things Antigraviator gets right but unfortunately there are also a few things which really hinder the experience overall.

There are 15 tracks in the game at the moment, 30 if you count reverse variations of each track. These tracks can be played in quick race where you can choose whether you play against  up to 3 friends locally splitscreen or up to 7 AI opponents. There is also a campaign  mode which consists of 8 leagues of increasing difficulty, novice through to platinum,  each with 4 tracks where you need to place 1st in one league to unlock the next. And finally there is an online multiplayer mode where you can play causally against up to 7 friends or ranked via a built-in matchmaking function.

The game looks great and it ran flawlessly for me, never dropping below 144fps which was a nice surprise. There was an issue that occurred, if I alt-tabbed out of the game and then back in, where the game would just not feel quite as smooth despite the frame rate being 144, and restarting the game fixed it. I did have one crash, but outside of that there were no anomalies.

The races themselves are, as you would expect, incredibly fast paced. Each track can be played in a variety of different modes; single, which is a traditional lapped race, countdown which is a timed based race where a timer ticks down (going through checkpoints adds more time and you want to try and place in the highest position you can before it runs out). And then there is death race which is an elimination mode, where the racer in last position will be eliminated each lap as will the racers that get destroyed by traps. The goal is to be the last man standing by the 8th lap.

Each track has booster pads scattered around that when driven over will increase your speed. There are energy pickups as well which when collected will begin to fill up a meter. When the meter has enough charge you can opt to use it to nitro boost to gain some speed, or use it to trigger the various traps that are located on each track.  If any of you have played Split Second you’ll be familiar with this kind of mechanic. There are various locations on each track that can have  traps trigger. Once any racer is within range of these areas and has enough energy collected, they can trigger the associated trap.

The traps vary depending on which track you are currently racing on, but they come in the form of missile barrages, falling crates, falling rocks, blinding gas, energy walls etc. Some of them will stop you dead in your tracks, and others will slow you down or hinder your visibility making it difficult to see where you are going. If you take too much damage from a trap your grav will get destroyed as well, and in death race mode that will be the end of your race. In addition to the ones listed above, there is also a trap that allows you to fire a single missile at the opponent in front of you to slow them down.

The trap mechanic, although it may sound good on paper, actually ends up hurting the game in quite a significant way, by constantly interrupting the flow of the race.

You can roll left and right with your grav to avoid obstacles or ram other racers who are trying to overtake you. The problem is  the placement of some traps is just plain bad. Dropping physics based box obstacles  just over apex of a hill or just out of sight around a sharp corner,  makes it impossible to actually see them before its too late,  which in turn makes roll feature redundant.  Crashing into these will stop you dead in your tracks and could likely cost you the race.

The player needs enough time to see and react to these obstacles. Avoiding obstacles should be a skill based thing not a luck based thing.  This is not the case with all of the traps, but there are quite a few that fall into this category. When you are in first place you will constantly have missiles fired at you at from the racers behind you. It’s not limited to being in first place though, but it’s more frequent. It happens always at the same places on the same tracks and it gets a little tiresome after a while. They are avoidable, but will require 3 nitro/boosters pads  boosts to get away. So you’ll see the warning and then have to immediately use up your energy reserve avoiding the missile. If you don’t have enough energy stored, well you’re just going to have to brace yourself and hope you don’t lose your position.

The inclusion of this trap mechanic seems very odd to me. It ruins what would otherwise be a reasonably enjoyable high speed racing experience. In fact there were enough players complaining about it that the developers have said that they will be adding a “pure” mode that will have traps disabled. I’m not sure if this will affect the campaign (I hope it will) or if it will be a separate mode entirely. We’ll have to wait and see.

There is a simple upgrade system in the game as well.  Currently there are 3 gravs available and you start with one unlocked. Each grav has 3 parts that can be upgraded, with each part having an additional 2 upgrades. These add more acceleration, better handling, larger energy storage and better shields for example. So depending on your racing style you can somewhat customize your grav.

All of this costs credits and you get credits by entering the various leagues. The first one is free to enter and winning it nets you 8k and unlocks the next league. Each successive league costs more to enter but offers a higher monetary reward, but also increases in difficulty. If you don’t place in the top 3 you get nothing. For example entering bronze will cost 16k, but if you win it will reward you with 64k in winnings. On average it will take about 15 minutes to finish all 4 league races.

The difficulty of the game ramps up pretty quickly and can actually feel somewhat erratic at times. It wont be long before you realize  that you’ll need a better grav – thats fully upgraded – in order to even stand a chance of placing in the top 3.

Each upgrade costs between 5-20k for the grav you start with, however once you have purchased the second grav the new upgrades range between 150-200k. It’s at this point you start to feel the grind as you’re not fast enough to compete in the higher league with your current grav. So you end up grinding the lower leagues over and over to get enough credits to upgrade so you can compete in the higher league races that offer more reward.

Here is an example. You pay the entry fee of 16k to enter bronze league in the hope of winning 64k, which is actually only 48 profit, and that’s if you come first. Then you’ll need to spend another 16k of that to enter again or you could spend 32k to enter silver league, but if you lose you’ve just wasted your money. Risk and reward, rinse and repeat until you’ve amassed 200k to buy your first upgrade. Repeat that for the other 3.

And this is before we even start looking at the decal customization that can cost anywhere from 10k – 200k+ each.

Once you’ve got your upgrades you probably won’t have 16 or 32k to enter bronze or silver respectively, so its back to the free league where you can win 8k, just so you’ll have enough to enter novice league again.

The point is that you’ll spend an inordinate amount of time grinding the lower leagues. The issue is that playing the same leagues over and over to farm credits is just not very entertaining. Especially since the campaign doesn’t feel like a real career mode. This is before we even consider the final and fastest grav costs 500k before even taking into account the upgrades for it.

In my 12 hours of play I reached silver league with my fully upgraded second grav. I can win or at least place in the top 3 in the first 3 races, but come the last race I’m having issues even placing in the top 6. It’s as if the AI difficulty suddenly jumps up 2 notches in the last track.

The moment you finish the 4 races in any league it takes you back to the main menu and gives your monetary reward. If you want to play another league you select campaign and choose it. There is no sense of cohesiveness with the campaign and as a direct result it feels disjointed compared to say a game like Redout. It feels extremely barebones and somewhat disappointing. I never felt a sense of progression.

There was also no way to customize the build of your grav between  tracks during a league, so you’re forced to play all the races with the loadout you entered the league with.

All this made the campaign less enjoyable than it should’ve been.

There are a few other issues I’d like to mention as well.

The game only offers one camera view, so if you are hoping for a cockpit view or the ability to at least choose a different camera angle you’re out of luck for the moment. However the devs have stated they will be adding more camera options in a future patch. The music in the game is average at best. It unfortunately just didn’t stand out very much and I found myself turning it off and just listing to other music while I was playing the game. And even though Antigraviator does manage to create a great sense of speed, the gravs themselves didn’t feel like they had weight to them; it almost felt like I was controlling paper planes, they felt incredibly light.

In conclusion I’d say the game feels somewhat shallow. The controls are not as technical as Redout and as a direct result feel less rewarding. The campaign doesn’t  feel like a campaign, but rather a bunch of separate groups of races joined by a menu screen. The upgrade options for each Grav are pretty sparse and there are only 3 Gravs to choose from. Combine this with a trap system that really detracts from the flow of the game, and quite an extensive grind in order to progress in the campaign, makes the game feel extremely repetitive. Add to that the fact that I was unable to find a single multiplayer match online which is a serious cause for concern for the longevity of this title.

That’s not to say that Antigraviator is a bad game, it’s not.  It’s an impressive accomplishment for a team of 5 indie developers, but it’s marred by some odd design choices, and it just doesn’t stand out from the crowd.  It’s just average, and I can’t whole hearty recommend this at full price because there are better anti gravity racers out there that have more to offer.