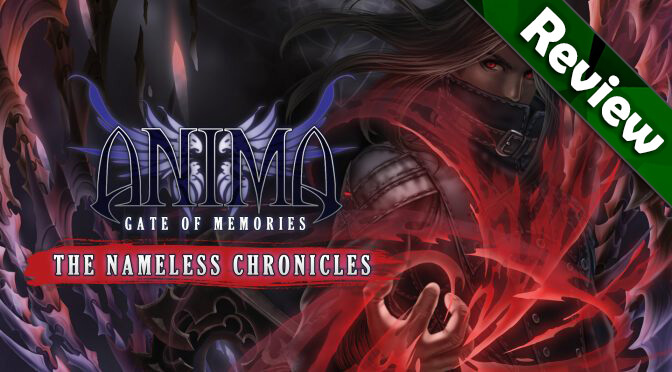 Speaking of development, let’s go on a brief journey describing this game’s storied history. Anima began in 2005 as the Anima Beyond Fantasy role-playing game books, a mix of anime and medieval fantasy. Then in 2012 a Kickstarter campaign (and 2014 Kickstarter-booster) by the same authors funded the development of the first Anima: Gate of Memories video game. Then the finished product finally released in 2016 and was mostly unnoticed by the world.

“Just looking at you makes me uneasy…
in a creeped out way.” – The Nameless

Fast forward to June 2018. Now the The Nameless Chronicles comes out not as a sequel but more as a standalone mini-expansion. It tells the exact same Gate of Memories story from the 2016 game but is reframed from the point of view of a guy called The Nameless, who was present (and a boss) in the first game.

Hence, Anima, the overall world, telling the Gate of Memories story, but focused on The Nameless and his Chronicles. Perhaps this game wins the “most-seemingly-overly-long-and-confusing-title-that-actually-makes-total-sense-in-context” award!

So how does the game play? The fundamentals are pretty strong. Movement is responsive, fluid, and reliable. Most of the game takes place in a main hub and the three “worlds” that connect to it. Occasionally very welcome shortcuts are unlocked, allowing easy access back to the hub before and after boss battles. By the way, it should be noted that the game reuses about 75% of the first game’s art assets, even copying two of the three worlds and several boss battles.

The game zones themselves are fairly small, allowing quick but enjoyable exploration with a nice feeling of discovery when finding tucked away items. Intermittent basic platforming and overhead or side-angle camera perspectives add a bit of flavor to the journeying along with a dash of trap avoidance. A few basic environmental puzzles present themselves, paced out well enough to never be too tedious or tiresome.

The general idea is to explore each world recreated from the memories of past powerful beings called Messengers. The backstories of the three bosses are surprisingly thoughtful and interesting, and this mechanic of progressively unlocking the backstory before battling the boss is unique and excellent (just like it was in the first game).

“People… Puppets… What if there had never been any difference from the start?” – A Messenger

Graphically, the game has a clean semi-cel-shaded appearance. The big scenes have nice detail, but much of the game is simple corridors or square-ish rooms. The environments suffer from not having a team of artists on hand, but considering most of it was done by a single person, the designs are impressive. However, the game is very dark with only a handful of actual lighting sources like candles and flames, so often the action can be hard to see.

On the topic of action, the combat overall is solid but also messy. Let’s begin with the good stuff. Enemies can be studied to learn attack patterns. The AI behaves fairly understandably although aggressively, forcing you to play smartly, learn quickly, and experiment with different skill options. It’s possible to build decent combos and feel fairly competent as you continue to grow both numerically and cerebrally as a player, which is fun and rewarding.

However, let me be very clear: this game can be very hard, frustratingly hard, even on Easy difficulty (requires a new game). There are several huge difficulty spikes that will most likely stop you in your tracks, making you wonder how you can win. On one hand, this is much like Dark Souls in how it forces you to adapt and learn, but on the other hand this game isn’t nearly as precise or balanced to overcome such sudden spikes.

“So much anger… You should get
some professional help.” – Unknown Entity

The bosses in particular can be grueling as they incessantly spam projectiles or nearly unavoidable super-attacks. To add insult to injury, the very end of the game forces you into two incredibly difficult boss fights without the ability to save or replenish healing items. And since you cannot switch to Easy difficulty without beginning a new game, many players may give up in vexation.

Coming back to ranged attacks, there are far too many combat encounters involving claustrophobic rooms with enemies shooting projectiles or relentlessly lunging at you. Combine the too-close camera and your character’s bizarrely huge dodge distance, and you’ll often ping-pong around during combat, camera flailing in all directions. It’s not ideal at all.

“You are not bad people. Just stupid.
Do not make me kill you.” – The Nameless

Moving on, the music is exceptionally good across the board, even worthy of separate listening. The memories theme in particular is a perfect fit with its hauntingly beautiful tones. However, the sound design in general is barely passable consisting of very simple slashes, pops, booms and whirls with very little 3D spatial awareness. Even worse, the environments have barely any ambient sounds except the big ones like fire or wind. This betrays the extremely limited budget, which leads us into the voice acting.

“That is the stupidest thing I have ever heard you say.
And you talk a lot.” – The Nameless

I commend the game for being fully voice-acted. With that being said, the performances range from pretty good to fairly poor as one might expect from a low-budget game. It takes a while to get used to the performances being…not so natural. However, by the end I had come to enjoy the characters with all their performance quirks, mostly because I was engrossed enough with the story.

This game is extremely story-heavy, which is a good thing because, honestly, the combat and exploration is simply not strong enough to sell the game alone. Fortunately, I’m pleased to report that what starts as an incoherent jumble does eventually solidify into a truly intriguing tale that deftly avoids the common clichés.

In particular, the third world you visit, brilliantly fleshes out the player character’s identity and purpose. This section is the clear standout, in large part because it’s the only world specifically built for this second game.

“That day a monster was born, a creature that
kept going forward driven only by resentment.
I hated everything I had become.” – The Nameless

Let me be clear: the story makes little sense unless you’ve played the first game. In the first half-hour you’re introduced to three key characters from the first game, and the only way to truly know what in the Anima-world is going on with them is by experiencing the first game. Without that knowledge the second game will seem kind of bizarre when random characters keep reappearing, acting like you should know them.

It may seem like I’m saying you must play the games in order. Actually, let me assure you that you are truly better off playing this second game first! Ironically, it is better to experience the backstory of The Nameless before experiencing the first game. Plus, this game is much more playable than the first, with better pacing, less tedium, much better platforming, and quality-of-life improvements. So my advice is to complete The Nameless Chronicles and only play the first game if you’re very intrigued with the characters and story.

“Not all those who live in the darkness are the
monsters you have been told about.” – The Nameless

A few other topics. For those who absolutely insist on using keyboard and mouse only, know that the game displays controller prompts most of the time, whether or not a controller is plugged in. There are stutters upon entering new areas and auto-saving. I only encountered one or two glitches, getting stuck in a wall or two, which is very impressive for such a small development team!

The bottom line, as with all games, is “is it fun?” Unless you despise very hard games, this game’s charms may grow on you as you play. For me personally, I liked the story and characters so much that I bought and played the first game, and then I replayed the second on the New Game Plus mode. So how can I hold all its numerous low-budget flaws against it when it held my attention so well?

“I can only say that this is
an old story that is about to end.” – Velez

This game deserves to exist because there’s humanity here, although it’s struggling to arise out of the low-budget, sometimes-unbalanced difficulty. Nevertheless, by the end of my playtime, I genuinely cared for The Nameless and was sad to say farewell, especially due to the second game’s very strong ending which sets things up for a third.

My hope is that one day these characters I care about can emerge in their own higher-budget, balanced, and beautiful sequel, a world worthy of the lofty and yet unrealized Kickstarter dream of 2012. Until that day, what we have here is a rough gem, not quite sparkling, but one worth the budget-price if you have a soft spot for scrappy labors of love.

Playtime: 24 hours total. Nick spent around 14 hours on his first playthrough unlocking the true ending. He enjoyed the story so much that he bought and finished the original Anima: Gate of Memories in 16 hours. He then went back to the second game and spent 10 more hours completing a very challenging New Game Plus, making the total playtime of both games around 40 hours.