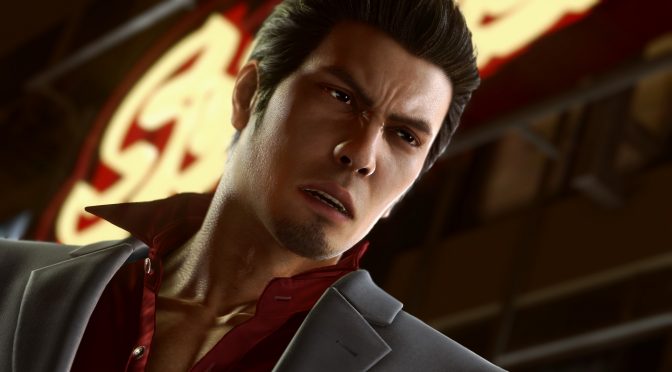 Yakuza Kiwami 2 is a game that a lot of fans have been looking forward to. Powered by the Dragon Engine, the game’s PC version was handled by QLOC so it’s time now to benchmark it and see how it performs on the PC platform. 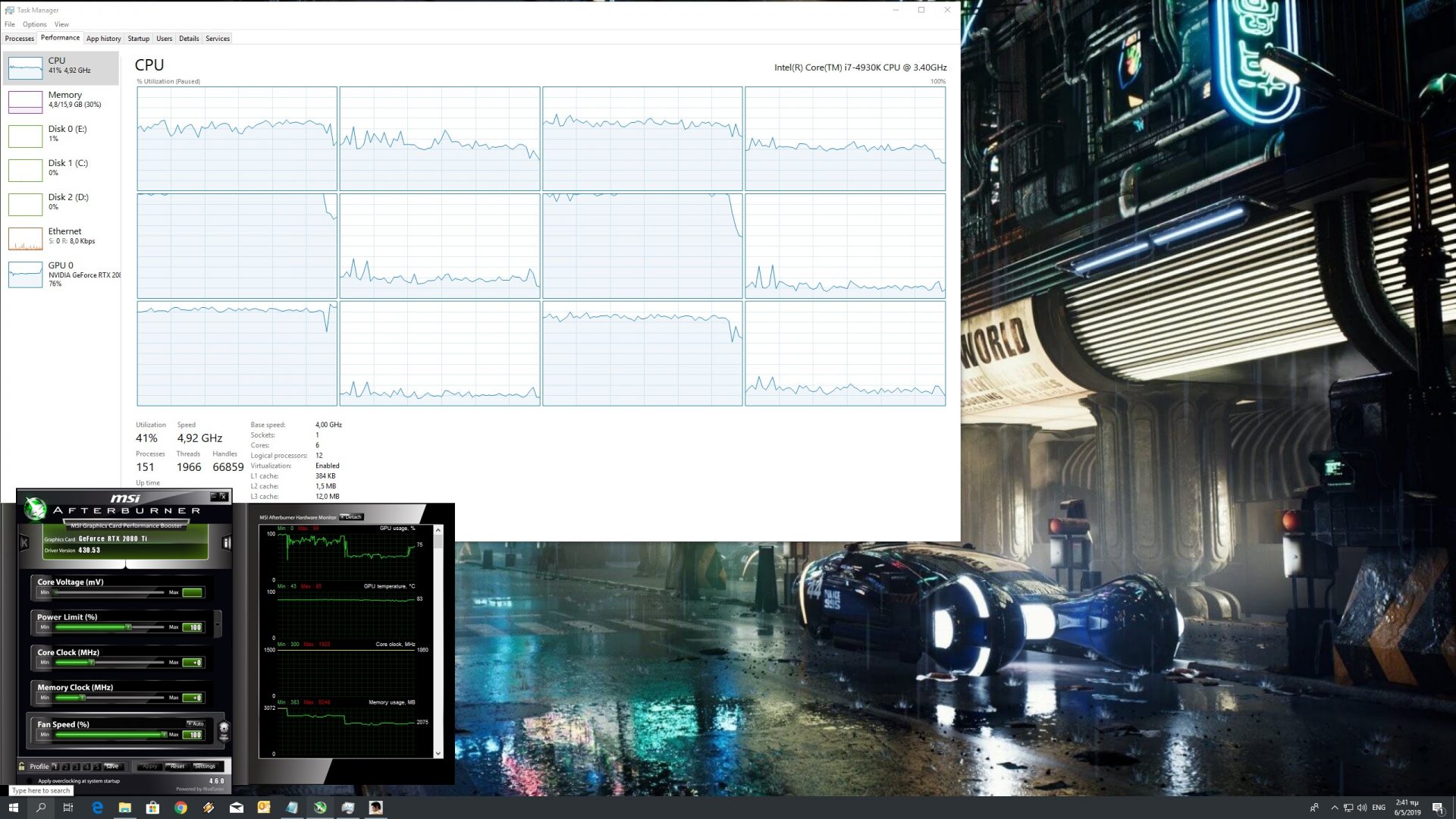 QLOC has included a few graphics settings to tweak. PC gamers can adjust the quality of Textures, Shadows, Geometry, Anti-Aliasing (FXAA, SMAA and SSAA), and they can enable or disable Realtime Reflections, Motion Blur and SSAO. There is also a Render Scale option, a Field of View slider, and the game supports DSR as well as high refresh rates. 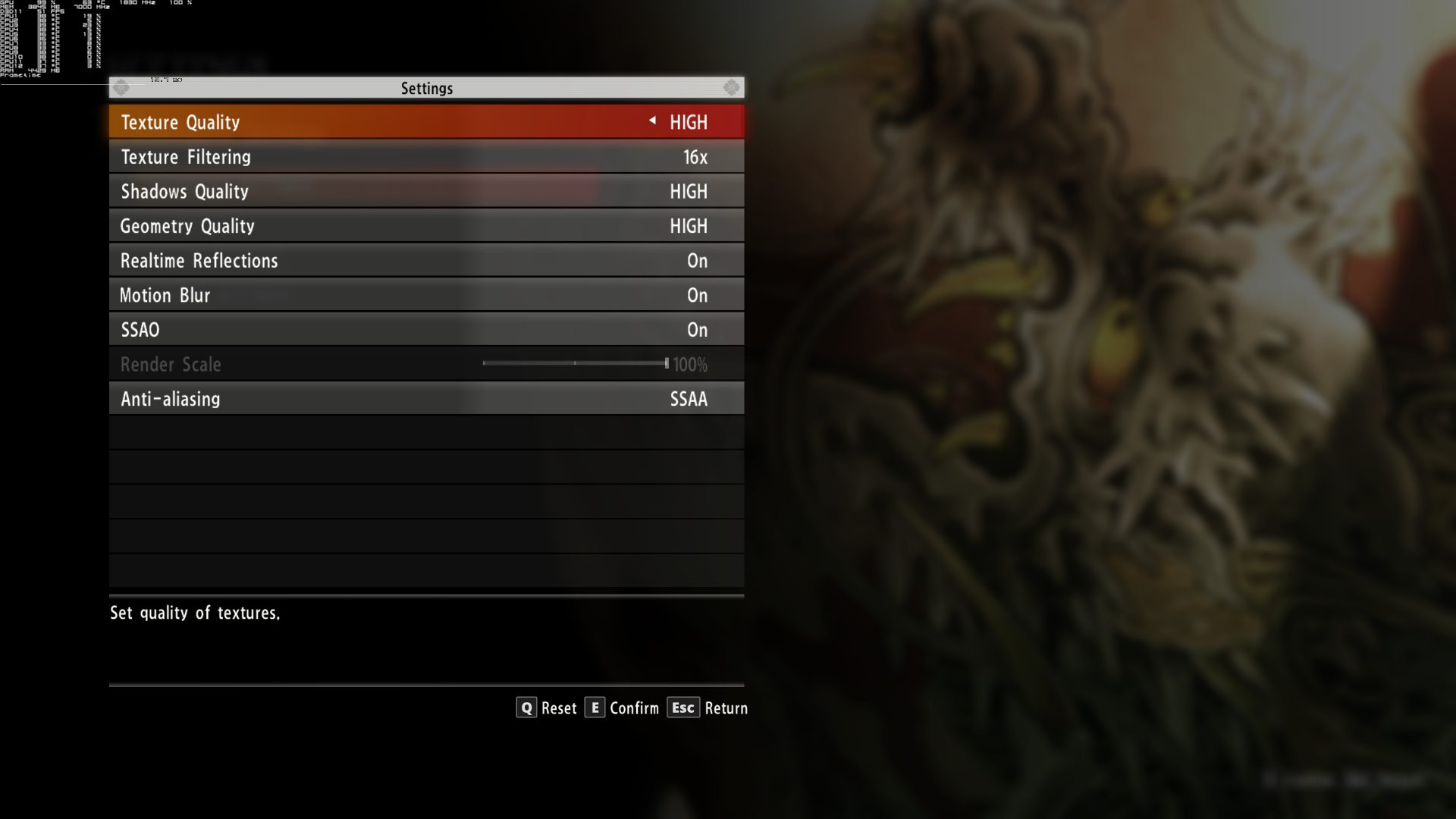 Yakuza Kiwami 2 does not come with any in-game benchmark tool. As such, we’ve decided to benchmark the Kamurocho area as that appears to be a really demanding area with lots of NPCs on screen. 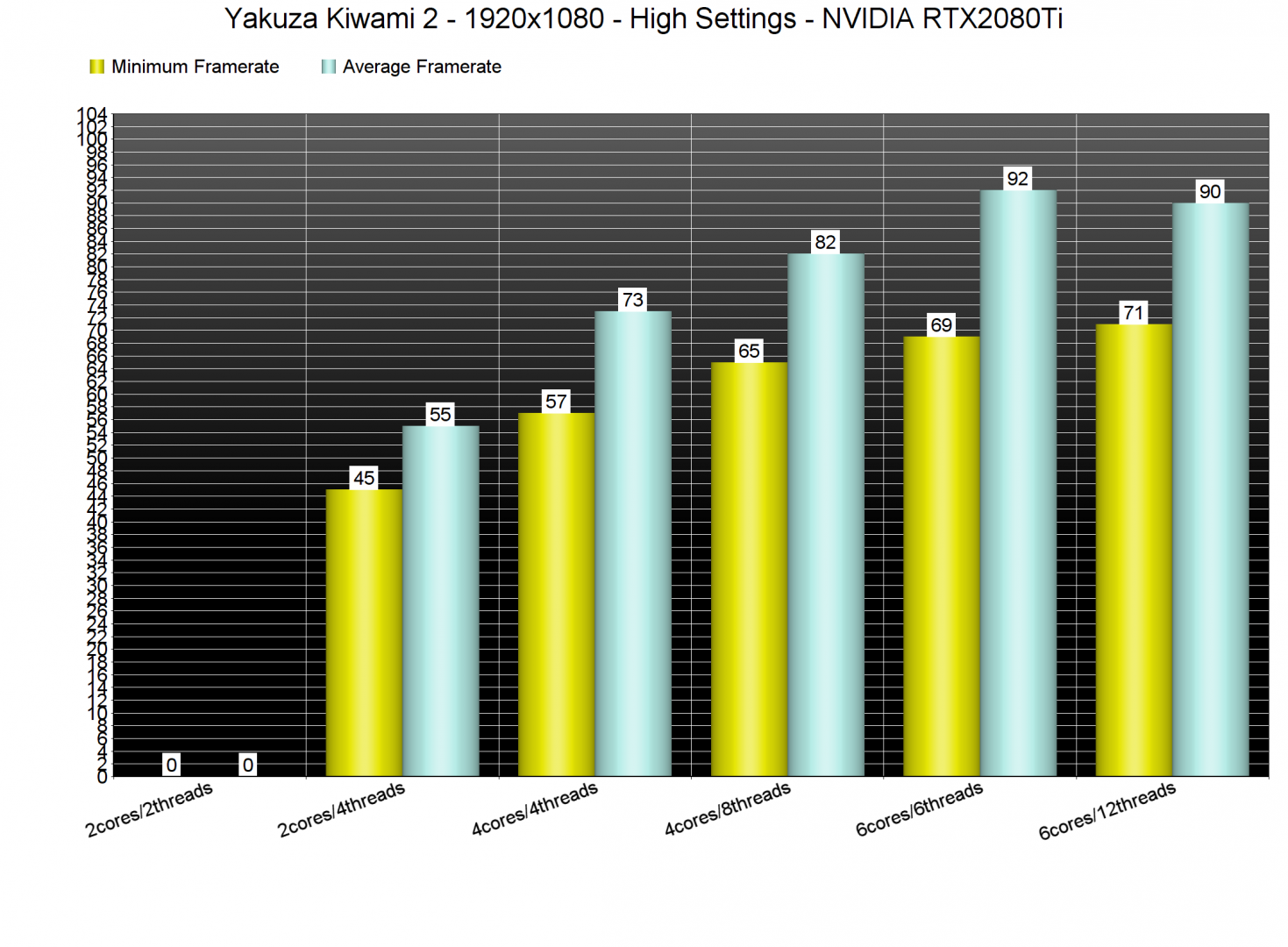 Yakuza Kiwami 2 appears to be mainly using six CPU cores/threads which explains the performance increase we witnessed on our simulated quad-core system (and the lack of any additional increase on our six-core CPU). What this ultimately means is that even older CPUs (like our Intel i7 4930K) can run the game with constant 60fps, provided they are not limited by the GPU.

At 1080p and on High settings, most of our graphics cards were able to offer a smooth gaming experience. Our AMD Radeon RX580 came close to a 60fps experience (51fps minimum and 58fps average), whereas our AMD Radeon RX Vega 64, NVIDIA GTX980Ti and NVIDIA RTX2080Ti had no trouble at all offering a smooth experience. Furthermore, and with the exception of the NVIDIA RTX2080Ti, all of our graphics cards were used to their fullest. 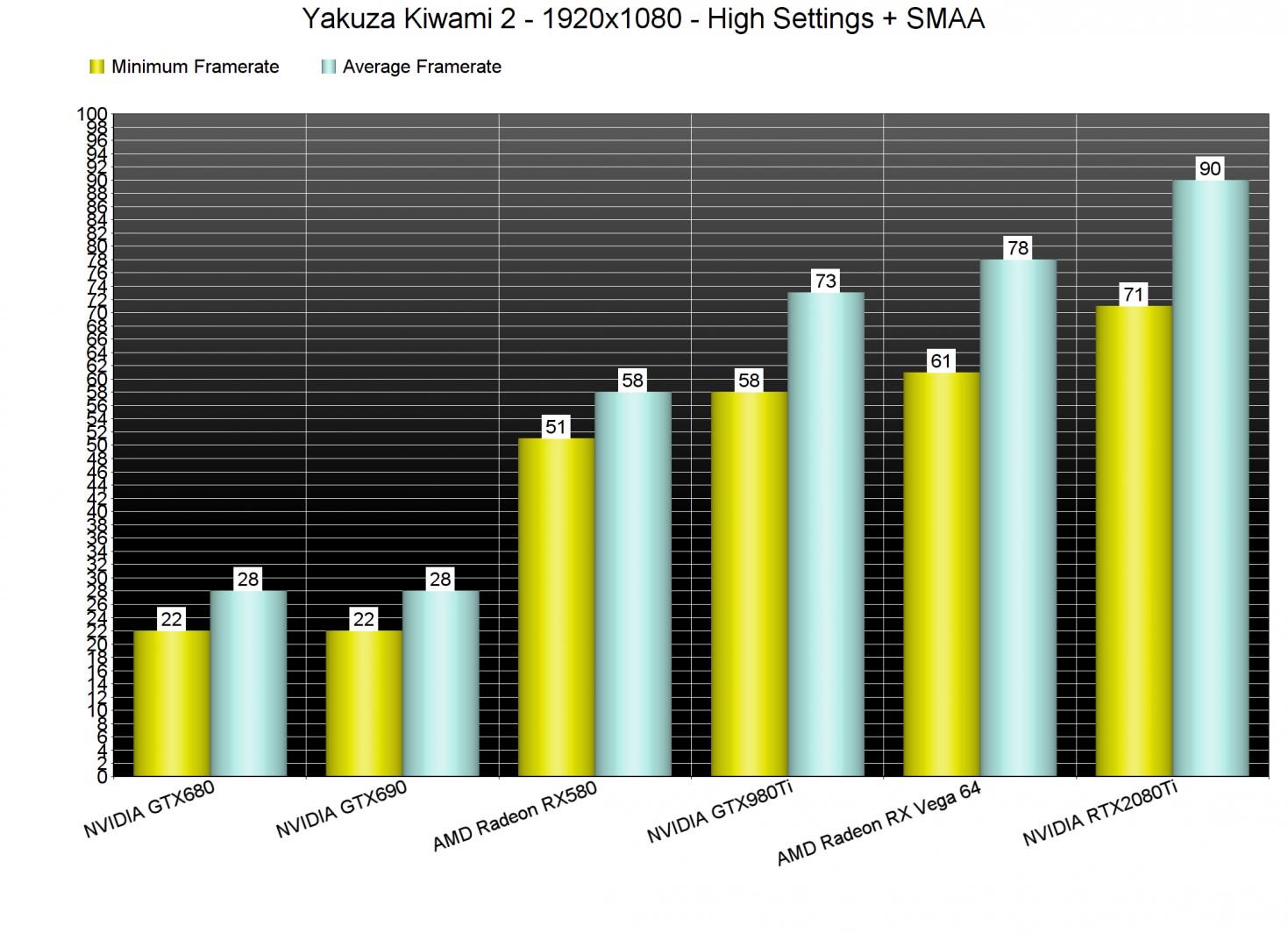 At 1440p, our NVIDIA GTX980Ti was unable to hit a 60fps experience, and our AMD Radeon RX Vega 64 came close to it. The only GPU that was able to offer a 60fps from those we benchmarked was the NVIDIA RTX2080Ti. As for 4K, our NVIDIA RTX2080Ti was unable to provide a smooth gaming experience. NVIDIA’s flagship GPU was used to its fullest in 4K so we are talking about a GPU limitation here and not about a CPU bottleneck (after all our CPU was able to push a minimum of 71fps and an average of 90fps at 1080p). For those interested, we were able to get a constant 70fps experience at 3325×1871 so we strongly suggest using this custom resolution if you own an NVIDIA RTX2080Ti GPU. 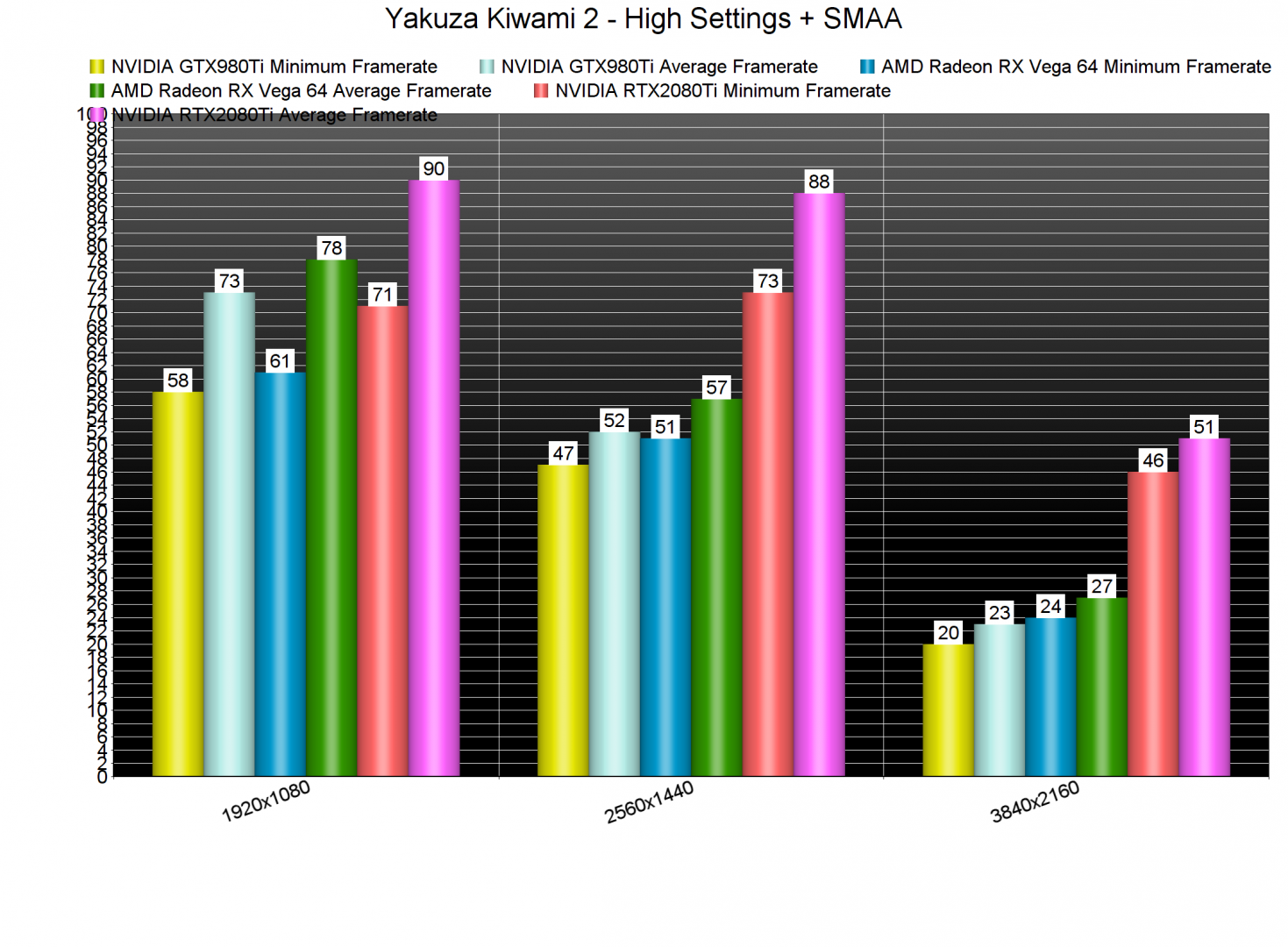 Graphics wise, Yakuza Kiwami 2 is undoubtedly better than its predecessor. As said, this new Yakuza game is powered by a newer engine and the biggest improvement here is the lighting system. Most of the textures have been also improved, and there are a lot of cool reflections all over the place. Moreover, the main character models – especially during cut-scenes – are among the best we’ve seen. The only downside here is the aggressive Depth of Field effect that cannot be disabled/removed, something that will definitely annoy some gamers.

In conclusion, Yakuza Kiwami 2 can run smoothly on a variety of PC configurations, though it requires more powerful GPUs that what we initially expected. The game uses six CPU cores/threads, so we strongly suggest enabling Hyper Threading if your quad-cores support it. It’s also worth noting that the mouse controls have been improved, though there are still some annoying mouse acceleration issues so here is hoping that QLOC will resolve them via a post-launch patch. Other than that, QLOC did a great work!