Focus Home Interactive has released its off-road trucking adventure, SnowRunner, on the PC via Epic Games Store. As such, it’s time to benchmark this new driving game and see how it performs on the PC platform. 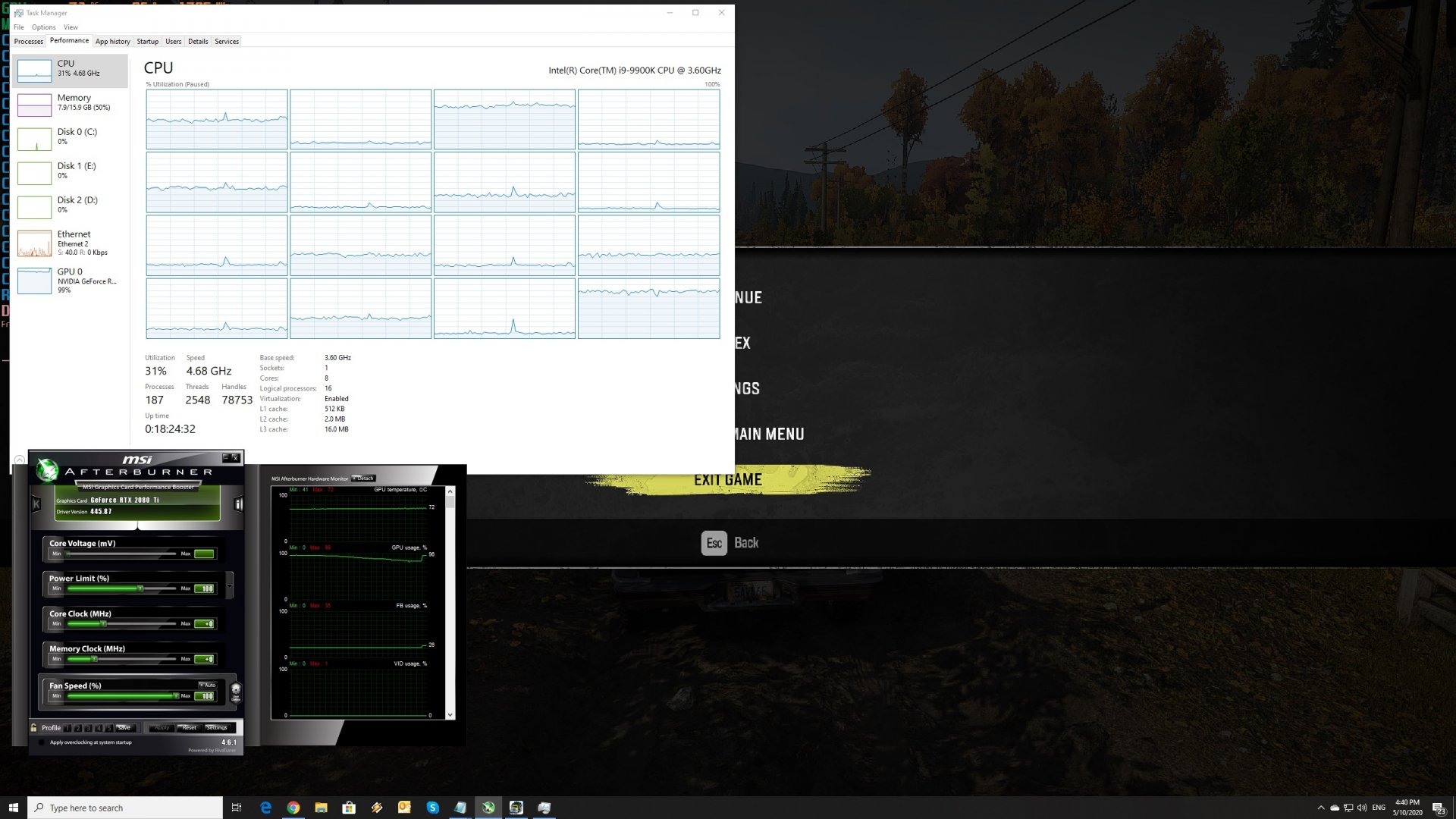 Saber Interactive has added a respectable amount of graphics settings. PC gamers can adjust the quality of Terrain Draw Distance, Grass Density, Objects, Simulation, Shadows and Textures. There are also settings for Ambient Occlusion, Water, Volume Fog, Lightshafts and Mirrors. Additionally, gamers can adjust the quality of Anti-aliasing, and there are also FOV sliders.

SnowRunner does not come with a built-in benchmark tool. As such, we’ve decided the starting area which appeared to be the most demanding area of the game. And although SnowRunner uses DirectX 11 and does not take advantage of more than four CPU cores/threads, it does not require a high-end CPU.

In order to find out how the game scales on multiple CPU threads, we simulated a dual-core, a quad-core and a hexa-core CPU. Without Hyper Threading, our dual-core system was able to push an minimum of 50fps and average of 56fps at 1080p/Ultra settings. With Hyper Threading enabled, we were able to get a constant 60fps experience. 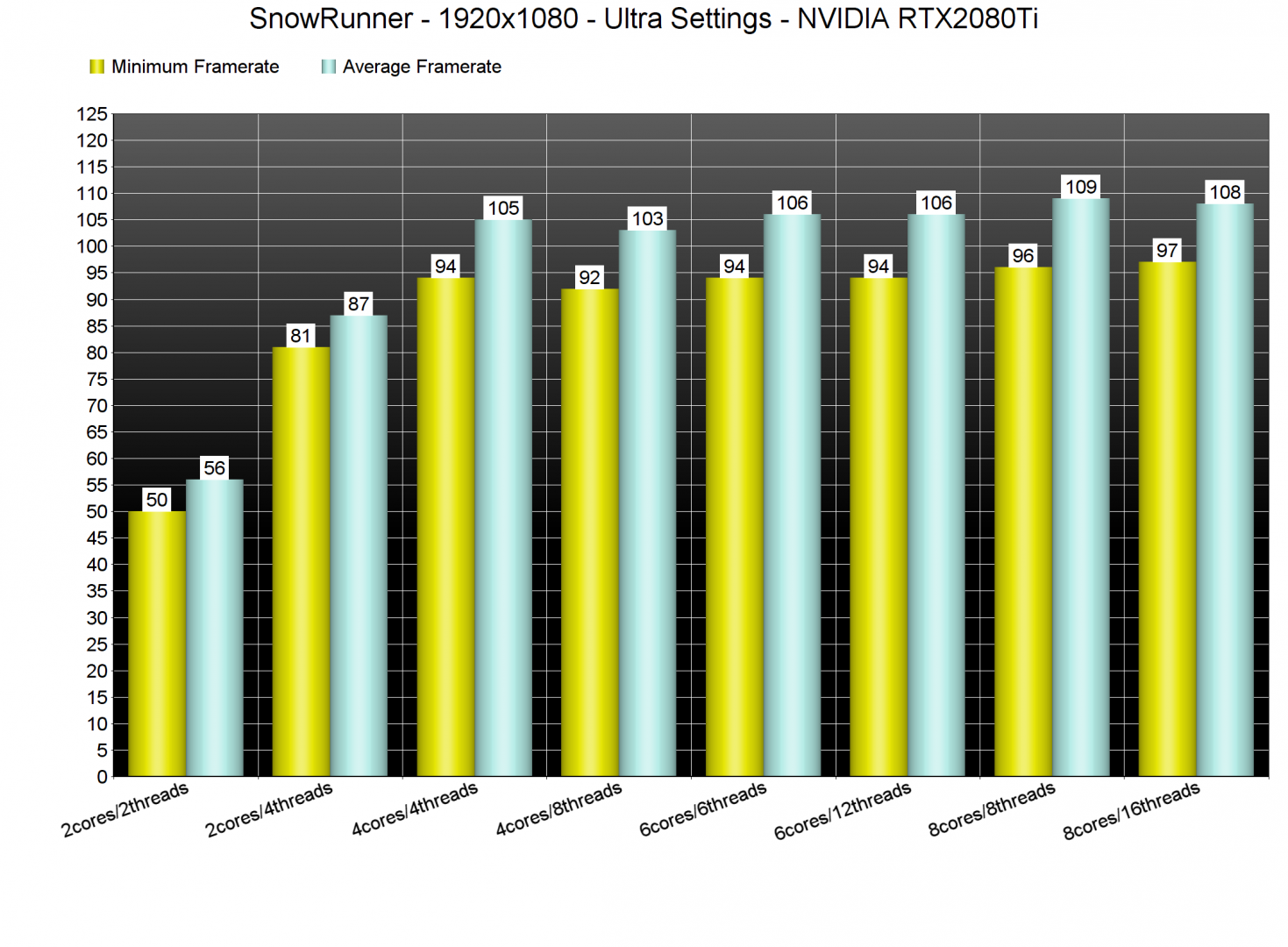 Unfortunately, and due to the DX11 API, our RTX2080Ti was used to its fullest at 1080p. Moreover, the performance on our older Intel i7 4930K was significantly slower. However, we were still able to get a constant 60fps experience, even on that system. 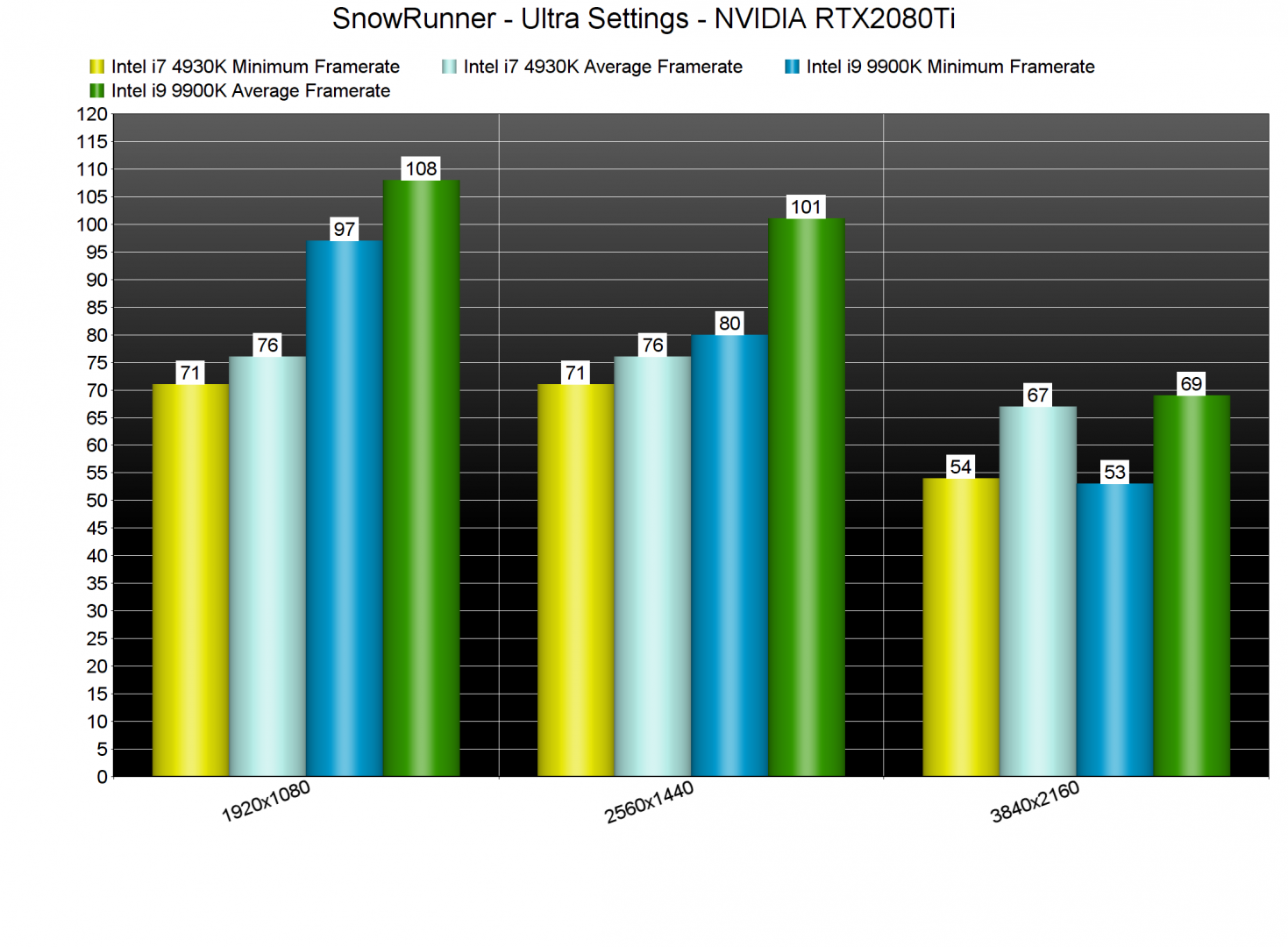 SnowRunner is a GPU-bound game on Ultra settings. The only GPUs that were able to run the game with 60fps at 1080p were the AMD Radeon RX Vega 64 and the RTX2080Ti. The GTX980Ti was unable to offer a smooth gaming experience. 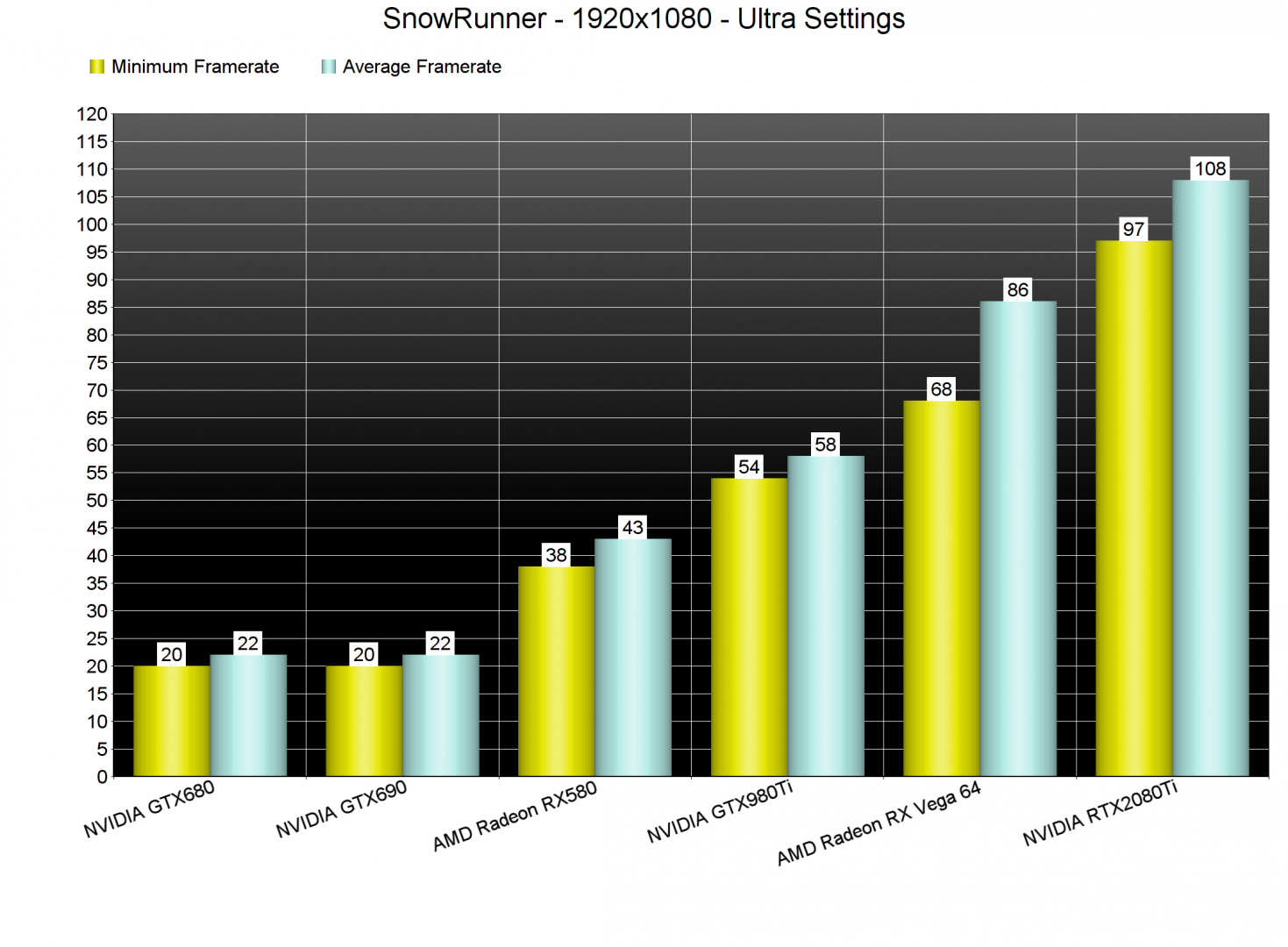 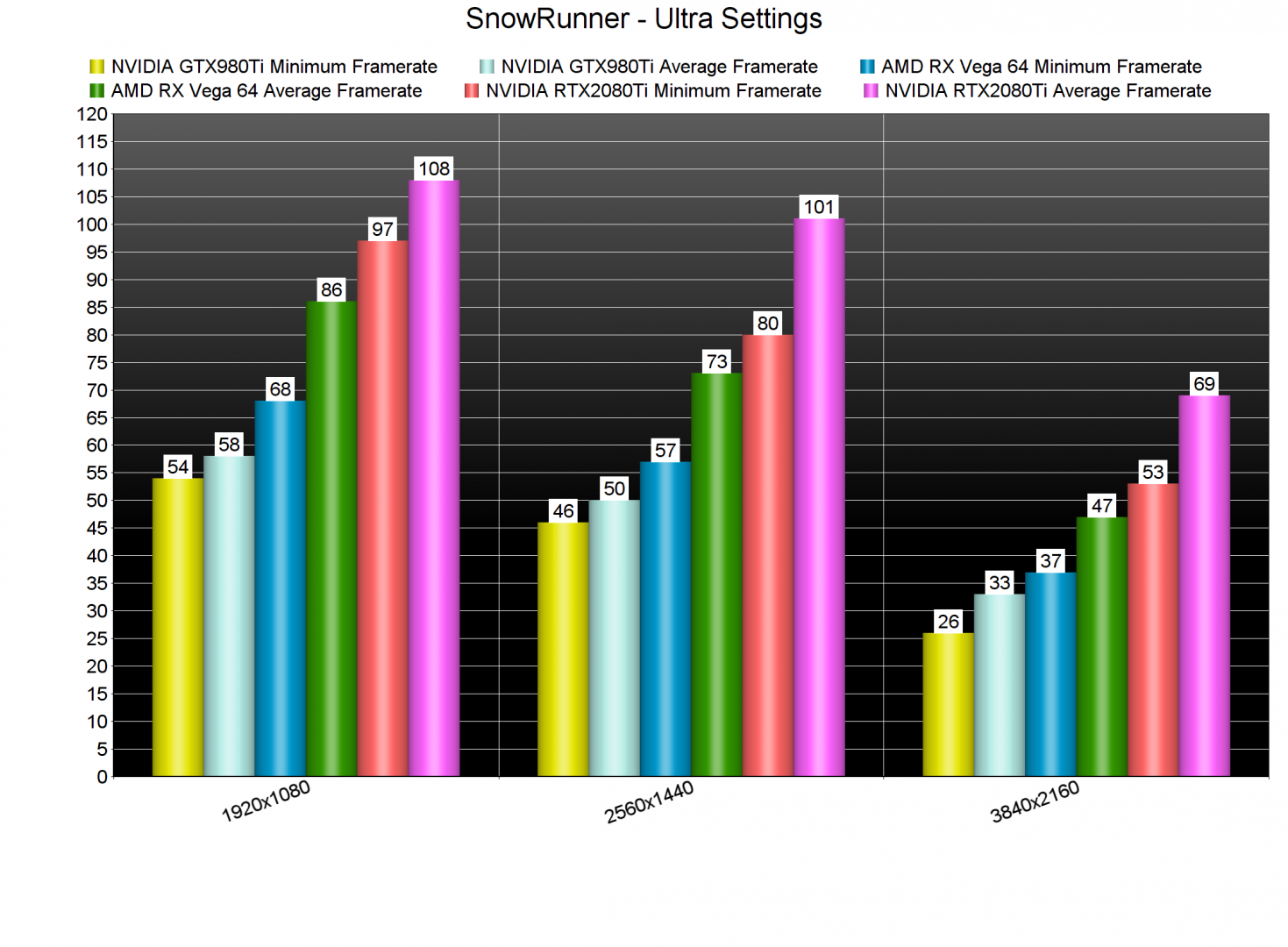 Graphics wise, SnowRunner looks stunning. Saber has used a lot of high quality textures, and the deformation effects look great. The lighting system also looks great, though it’s nowhere close to what other triple-A games offer. Still, its environments are well crafted and for the most part, the game looks amazing. While it’s not as technically advanced as Forza Horizon 4, SnowRunner is easily one of the best looking driving games.

In conclusion, and despite some optimization issues due to the DX11 API, SnowRunner runs great on the PC. Owners of older CPUs will not have any trouble at all running the game. However, PC gamers will need a somehow powerful GPU in order to max it out. Thankfully, SnowRunner is a looker on Ultra settings so it somehow justifies its GPU requirements.