When CI Games announced that Sniper: Ghost Warrior 3 would be powered by Crytek’s CRYENGINE, we were excited. You see, we consider CRYENGINE to be one of the best engines out there. However, CI Games was unable to properly take advantage of it. The game was plagued by a number of performance issues at its time of release and as such, we decided to postpone our PC Performance Analysis. Sniper: Ghost Warrior 3 was released almost a month ago and after two major updates, it’s time to see now how this title performs on the PC platform. 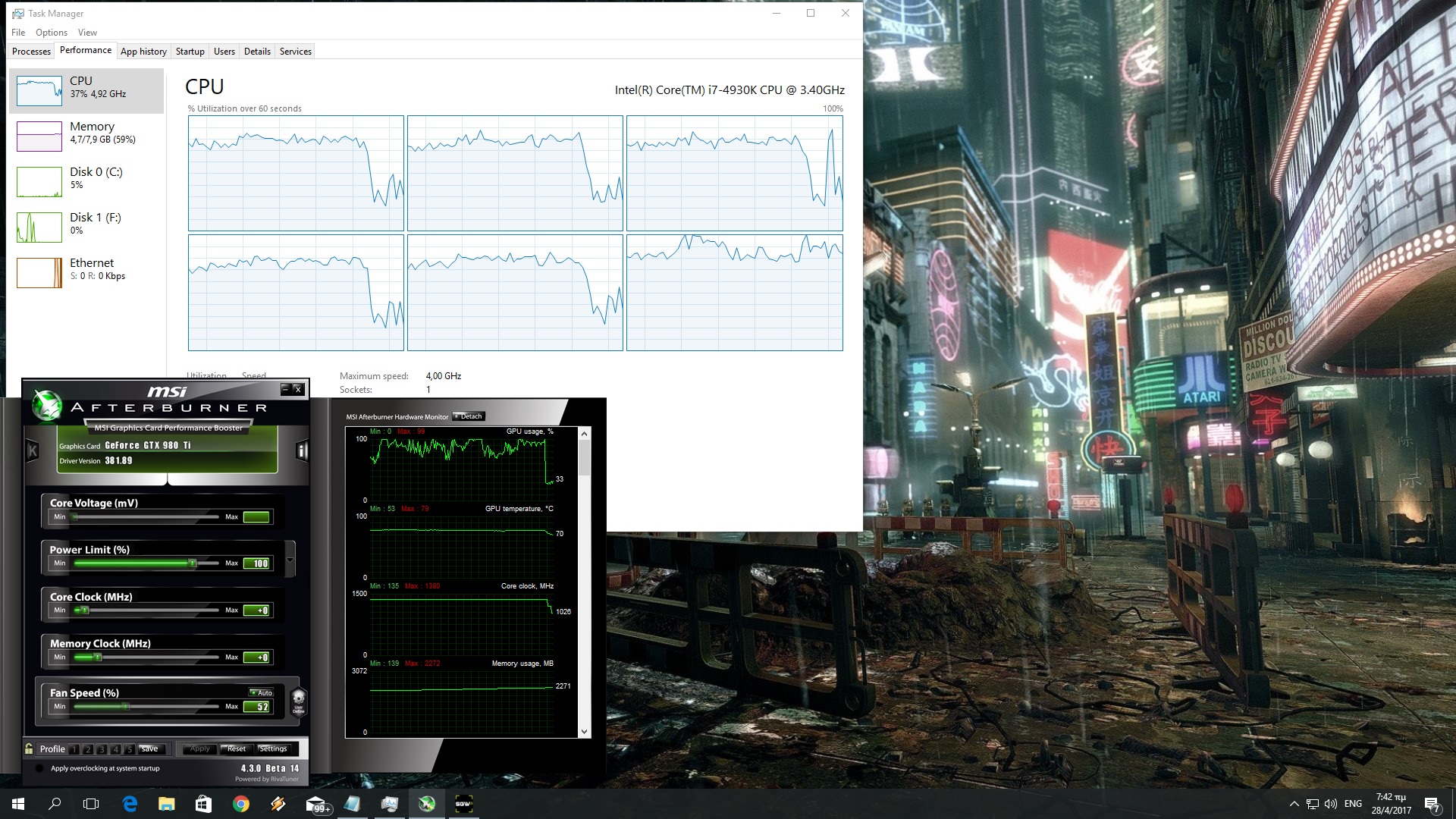 For this PC Performance Analysis, we used an Intel i7 4930K (overclocked at 4.2Ghz) with 8GB RAM, NVIDIA’s GTX980Ti and GTX690, Windows 10 64-bit and the 381.89 WHQL version of the GeForce drivers. NVIDIA has not included any SLI profile for this title, however you can use some custom SLI compatibility bits in order to enable it. All you have to do is use the NVIDIA Inspector Tool, find Sniper: Ghost Warrior 3’s profile, and use the SLI compatibility bits for Squadron 42 and Star Citizen.

Sniper: Ghost Warrior 3 comes with limited graphics settings. PC gamers can adjust the quality of Object Detail, Particles, Physics, Post Processing, Shaders, Shading and Shadows. There is also an option for Motion Blur, as well as a FOV slider. However, there is no option at all for anti-aliasing or for removing the annoying Chromatic Aberration effect. And let us tell you that this awful ‘feature‘ has been overused in Sniper: Ghost Warrior 3, resulting in really blurry visuals.

For our CPU tests, we lowered our resolution to 720p lowered our settings to Low (in order to avoid any possible GPU limitation), and used the entire Prologue mission. So, in order to find out how the game performs on a variety of CPUs, we simulated a dual-core and a quad-core CPU. 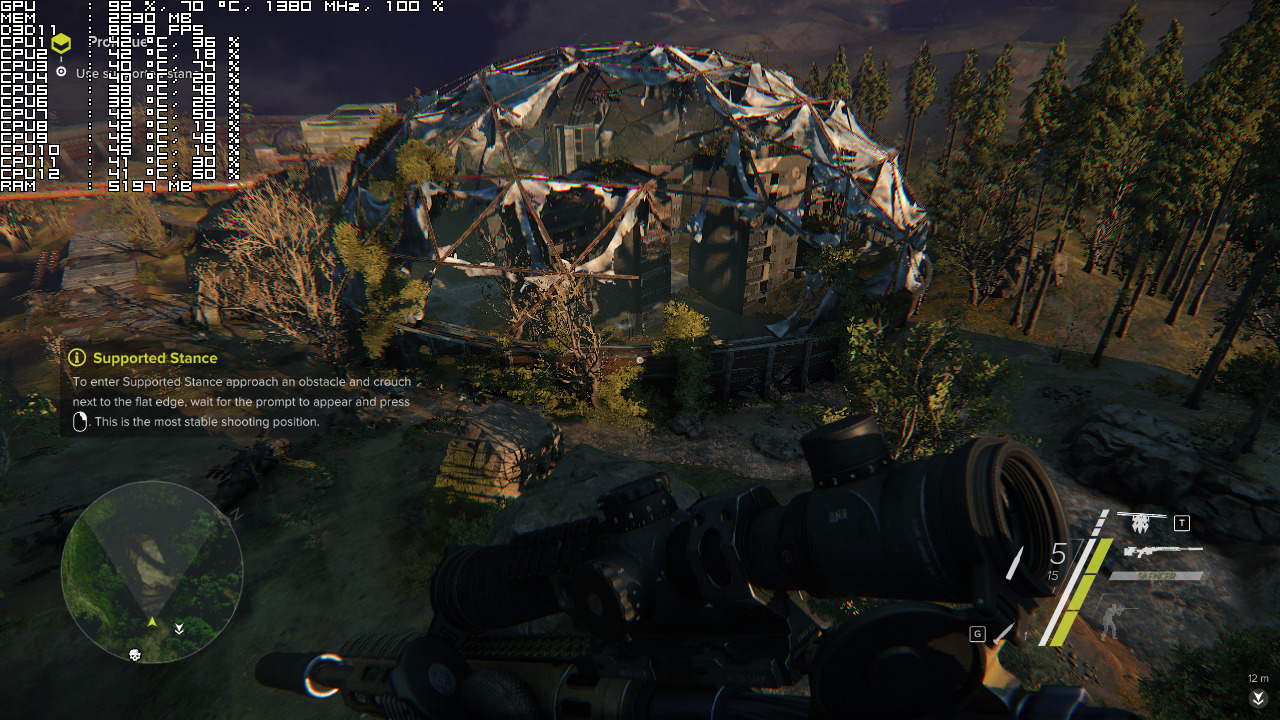 Our simulated dual-core CPU was unable to offer an acceptable experience, without Hyper Threading, as there was severe stuttering. The stuttering was completely eliminated the moment we enabled Hyper Threading, and both our average and minimum framerates increased significantly. 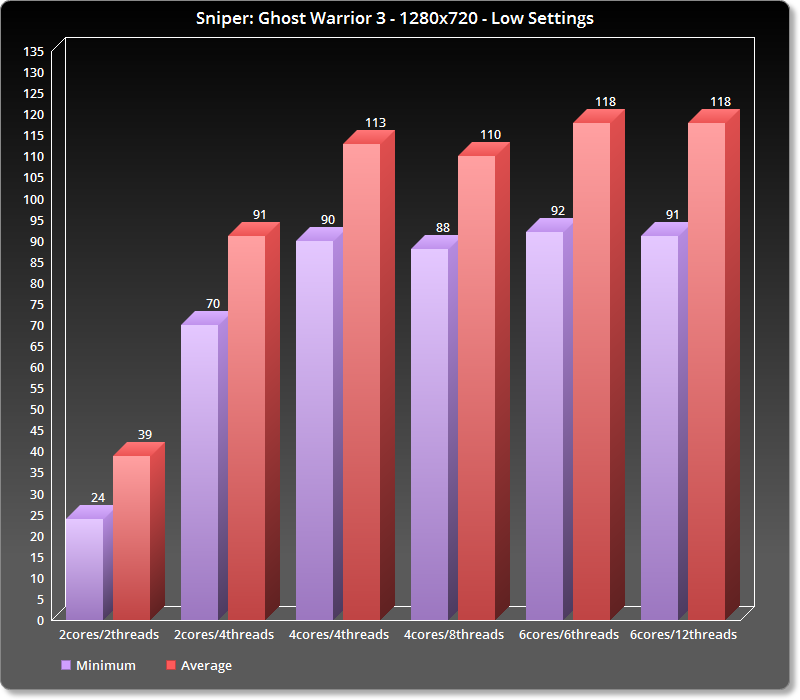 On the other hand, both our six-core and our simulated quad-core systems were able to run the game with no issues, and there weren’t huge performance differences between them. We know that CRYENGINE scales well on a lot of CPU cores/threads, however Sniper: Ghost Warrior 3 does not appear to be using a lot of CPU threads. 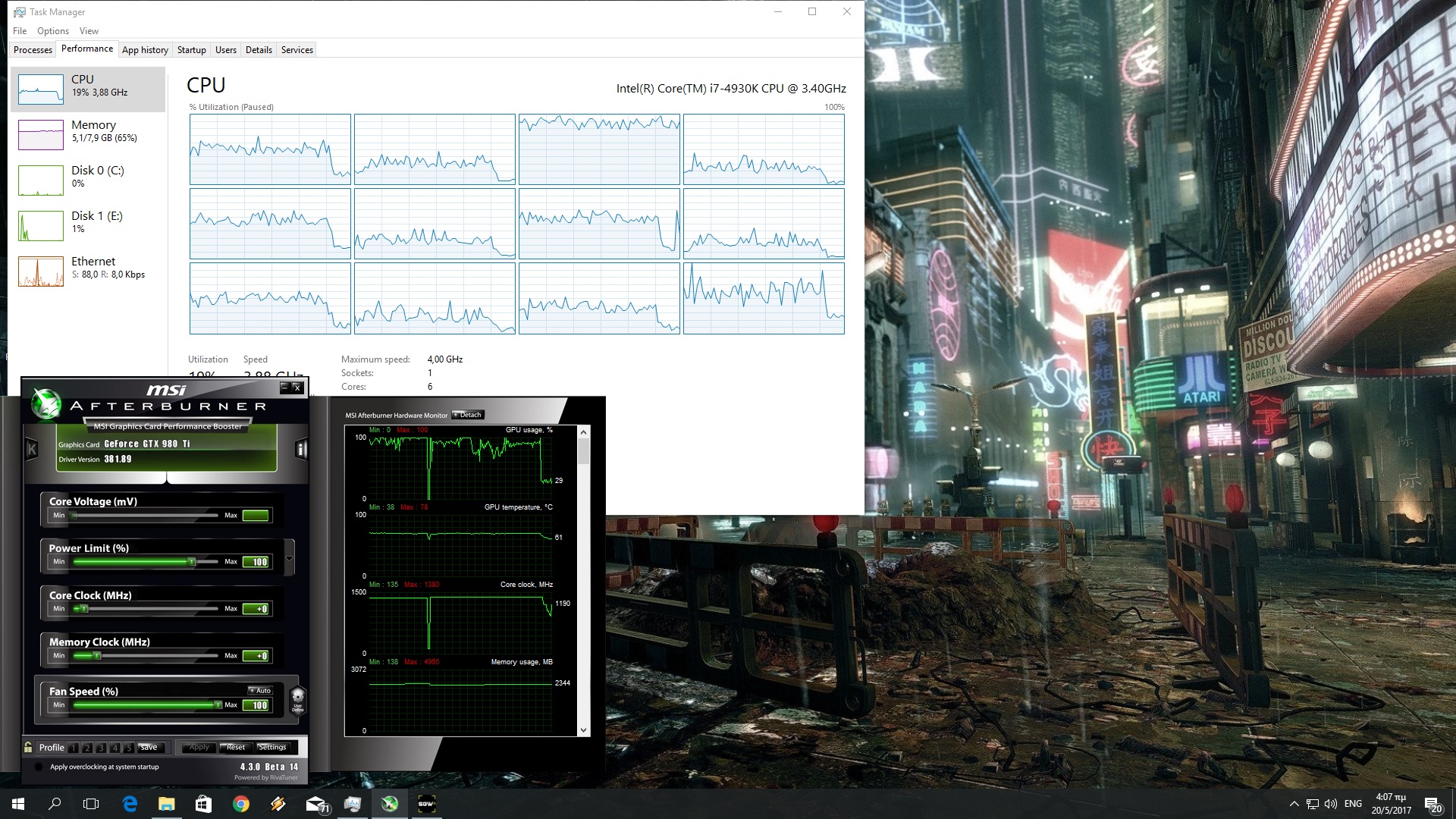 Now even though this title is relatively easy on the CPU, it demands a really high-end GPU in order to be played. The game comes with four presets (Low, Medium, High and Very High) and we had to lower our settings to Low in order to hit a stable 60fps experience. And that’s on a single GTX980Ti. Let us repeat it that last sentence; if you want a constant 60fps experience, you’ll need to lower your settings on Low on a single GTX980Ti. 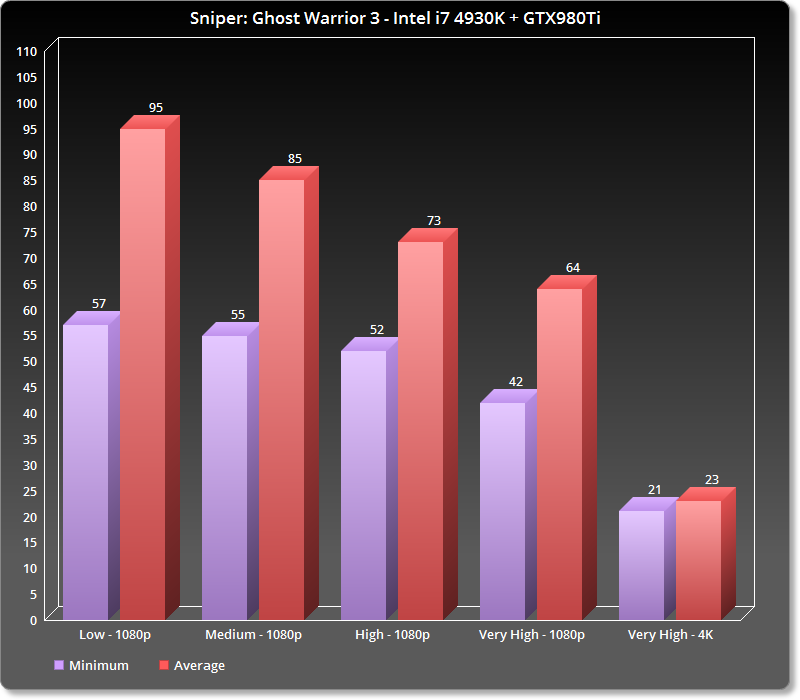 On Very High settings at 1080p, our GTX980Ti was able to push an average of 64fps and a minimum of 42fps. Things got better when we lowered our settings to High, however – and as we’ve already stated – there were drops below 60fps. Hell, even on Medium settings we could not hit a constant 60fps experience. Below you can find a screenshot on Low settings that was running at below 60fps on our GTX980Ti. 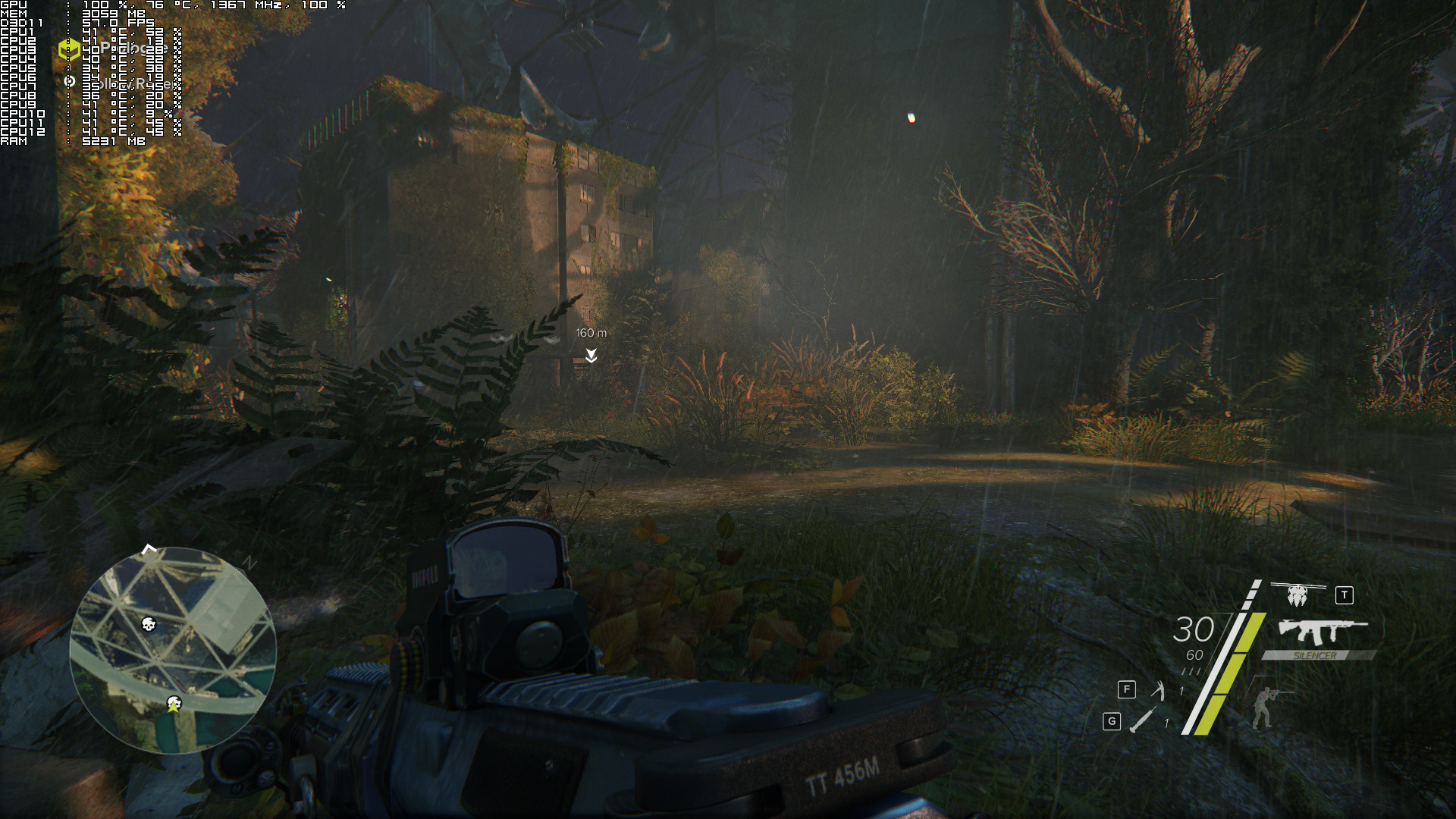 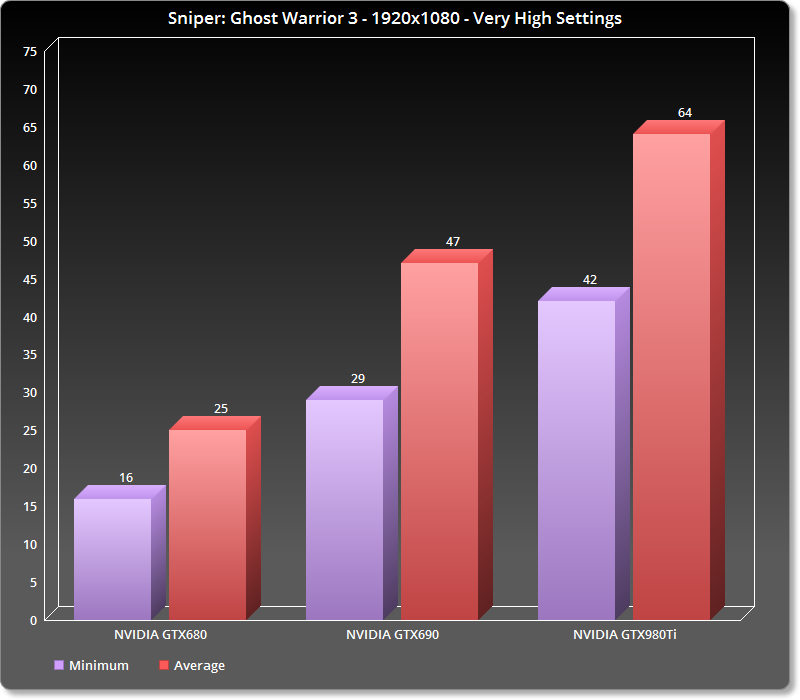 Sniper: Ghost Warrior 3 features some really interesting environments and high-resolution textures, however everything falls apart due to the use of Chromatic Aberration. Sniper: Ghost Warrior 3 is one of the few games that made us sick with its heavy use of that effect. So here is a hint dear developers; we do not perceive colors this way (and if you think we do, you desperately need glasses). So for the love of God, either stop using it or start offering options to completely disable it… unless you want us to destroy our eyesight for some odd reason.

Thankfully, and even though there is no in-game option, PC gamers can disable Chromatic Aberration via this method:

As we’ve already said, Sniper: Ghost Warrior 3 does not offer anything we haven’t seen in other triple-A games (that perform significantly better than it). There are some nice screen-space reflections, the rain effects are not that different from those found in Crysis 3, players can bend specific bushes/plants, specific light sources cast dynamic shadows, and there is a pretty good draw distance (even though you will notice some plants and objects popping out). The game also does not suffer from a lot of aliasing (perhaps thanks to its TAA method, though as we’ve said there is no option to control the quality of anti-aliasing so we are not sure what method is actually being used).

All in all, and even though Sniper: Ghost Warrior 3 demands a really high-end GPU in order to be enjoyed, its visuals do not really justify these ridiculously high GPU requirements. Thankfully, the game is relatively easy on the CPU and PC gamers will not need more than 8GB of RAM. Still, we strongly believe that CI Games should work further on optimizing its title, and offer more graphics settings! 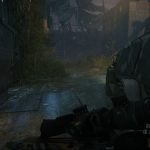 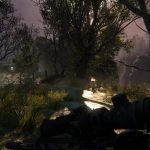 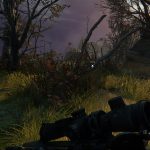 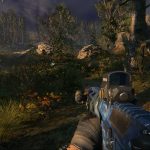 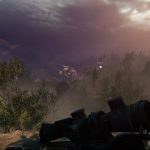 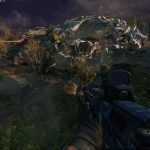 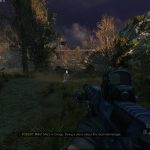 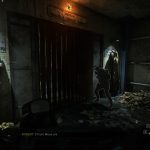 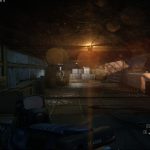 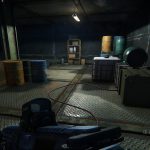 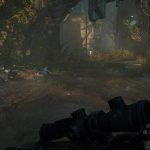 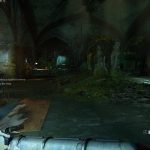 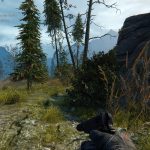 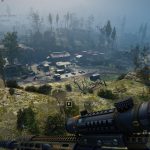