Resident Evil 2 Remake is one of the most anticipated games of the first quarter of 2019. Powered by RE Engine, this remake completely overhauls the classic action survival horror game. The game releases in a couple of days, on January 25th, so it’s time to benchmark its PC version and see how it performs on our platform. 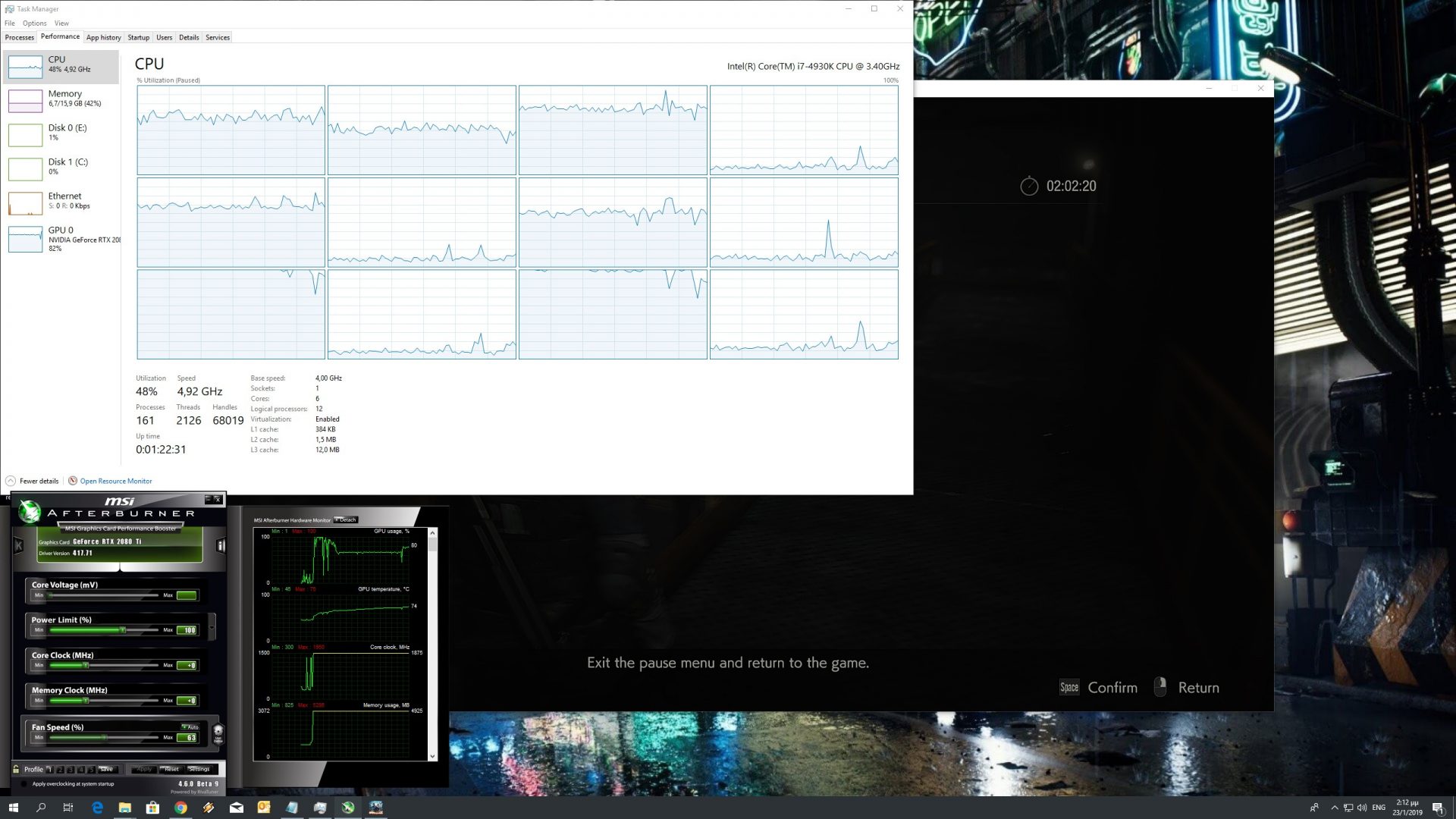 Capcom has included a wide range of graphics settings that players can tweak. PC gamers can adjust the quality of anti-aliasing (SMAA, FXAA, TAA and TAA+FXAA), Textures, Texture Filtering, Mesh, Shadows, Volumetric Lighting, Particles Lighting and Ambient Occlusion. There are also options to enable or disable Shadow Cache, Contact Shadows, Screen Spare Reflections, Subsurface Scattering, Bloom, Lens Flare, Motion Blur, Depth of Field, Lens Distortion (this option can also disable Chromatic Aberration) and Film Noise. Capcom has also included a Rendering Option and the game supports 4K resolutions, uncapped framerates and both DirectX 11 and DirectX 12. Furthermore, there are on-screen windows showcasing the changes that each and every option does, and there is no need to restart the game in order to apply your new settings (apart from when changing the API).

In order to find out how the game scales on multiple CPUs, we’ve simulated a dual-core and a quad-core system and we are happy to report that Resident Evil 2 Remake can run with constant 60fps even on a dual-core system. Even without Hyper Threading, our simulated dual-core system was able to push a minimum of 73fps and an average of 90fps at 1080p on Max settings (though we did notice some stutters here and there). Not only that, but the RE Engine is scalable on multiple CPU cores. 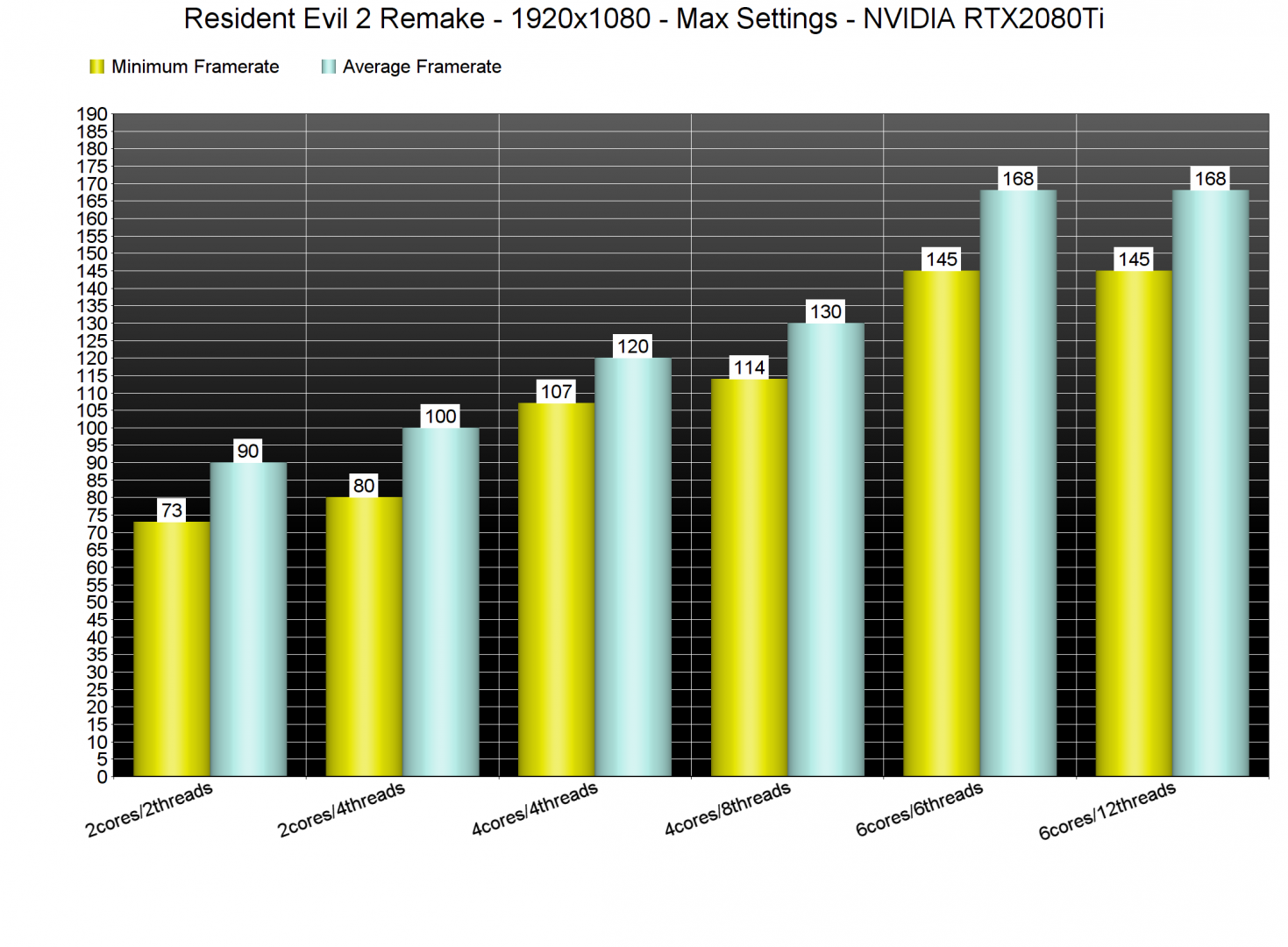 From the above, it becomes obvious that Resident Evil 2 Remake is mainly a GPU-bound title. Thankfully, though, Capcom’s latest title can run with constant 60fps on a variety of GPUs on Max settings. In 1080p, our AMD Radeon RX 580, Vega 64, NVIDIA GTX980Ti and RTX2080Ti were able to run the game with more than 60fps. 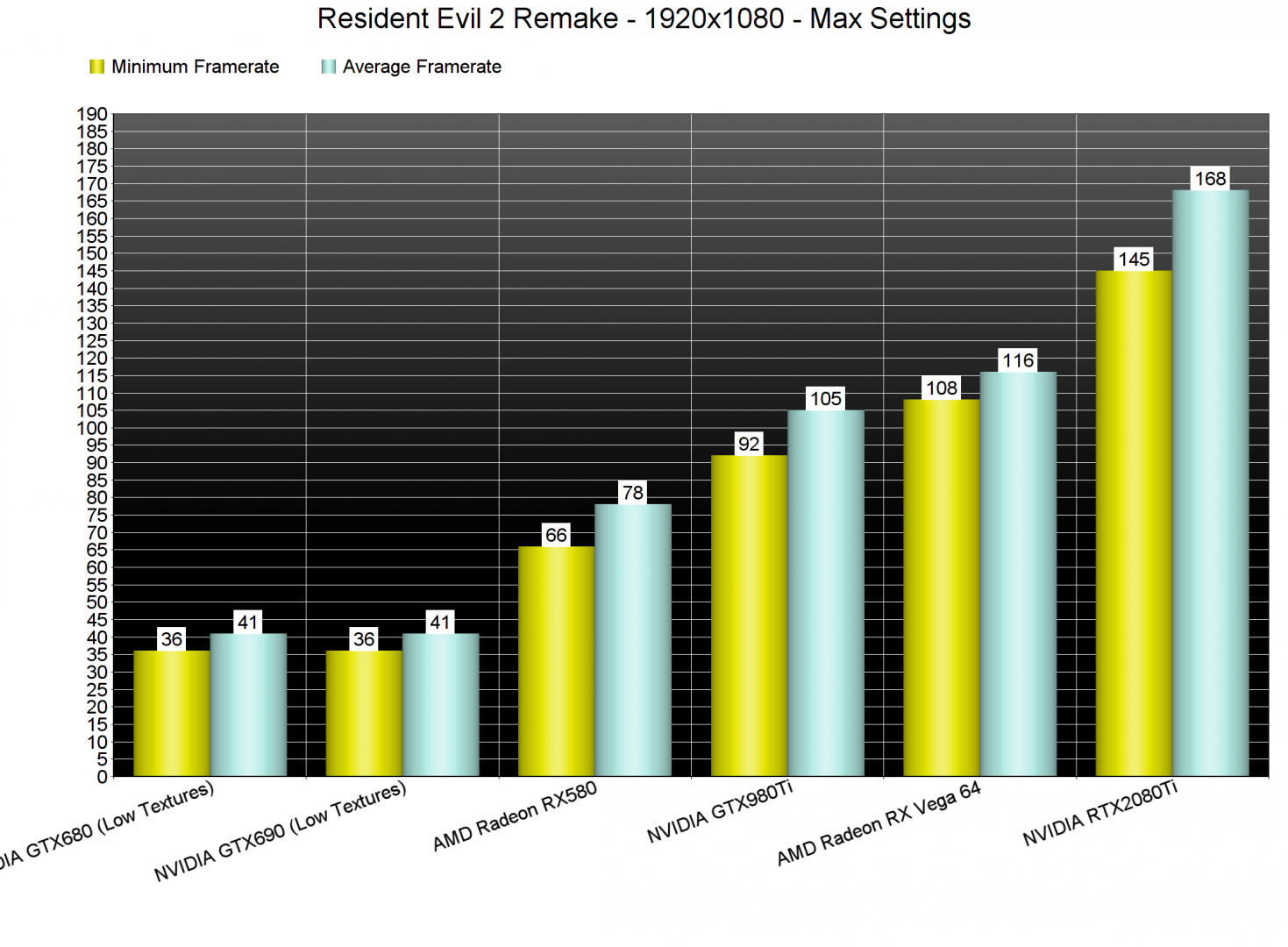 With the exception of the RX 580, the aforementioned graphics cards were also able to offer a smooth gaming experience in 1440p. As for 4K, the only GPU that was able to offer an almost constant 60fps experience was the NVIDIA GeForce RTX2080Ti. We did notice two scenes (when the zombies attack Leon right before meeting Marvin and the West Office area) in which the framerate dropped to 50s but other than that, the game ran with more than 60fps on the RTX2080Ti in 4K. In case you encounter any performance issues, we strongly suggest lowering first Volumetric Lighting, Ambient Occlusion and/or Shadows as these options appear to be the ones with the biggest performance impact. 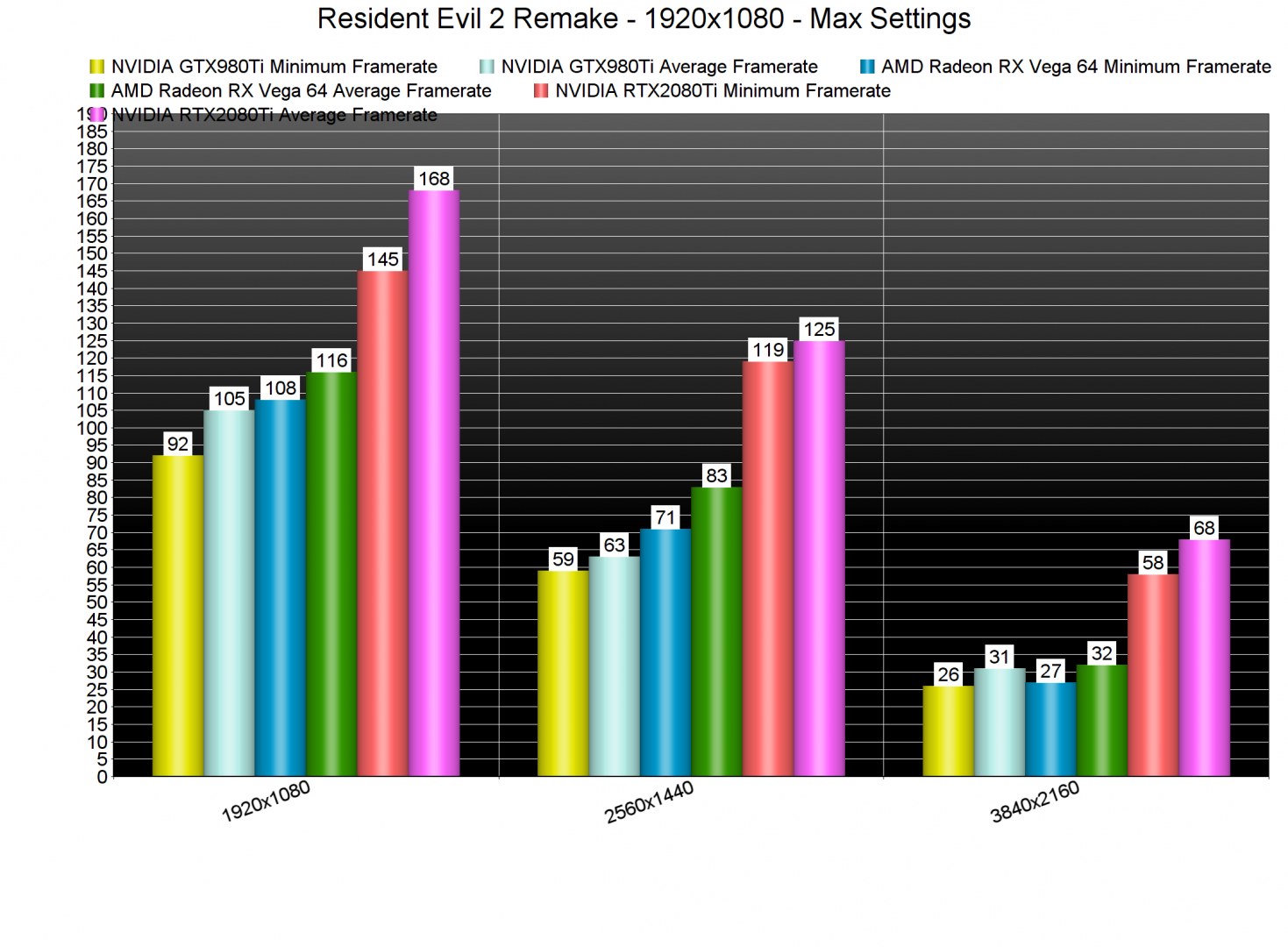 Graphics wise, Resident Evil 2 Remake looks absolutely stunning. The character models look incredible (you can also dismember them) and a lot of light sources cast shadows. The environments and the lighting are top notch and other than the limited interactivity (Leon can’t jump at all and can’t destroy objects such as lights, glass, wooden walls, etc), there is nothing really to complain here. While we wouldn’t call it a “next-gen” experience, Resident Evil 2 Remake is one of the most beautiful games to date. In order to “fix” the game’s blurriness that is introduced due to TAA (you should use TAA as there are a lot of jaggies when using the alternative SMAA solution even in 4K) though we used Reshade with its AdaptiveSharpen filter.

Still, and as we’ve already reported, the game suffers from some annoying graphical issues. The Screen Space Reflections are being rendered with some awful artifacts, DirectX 12 is slower than DirectX 11, the zombies are animated at 30fps when they are far away from the player and in lower resolutions the game is a blurry mess when using TAA (without Reshade).

Overall, and despite some of its issues, Resident Evil 2 Remake is a highly optimized game on the PC. Although the game does not require a high-end PC system, it looks absolutely gorgeous and can scale on multiple CPU cores. Capcom has also implemented one of the best graphics settings menu we’ve seen to date, the K+M controls are excellent with proper on-screen indicators and there aren’t any (after further examination, it appears that there are some slight mouse acceleration issues. Contrary to other games, these issues are very slight in Resident Evil 2 Remake. Even though I’m sensitive to such things, I’ve played so far 5-6 hours and I never had any issue “headshot-ing” the enemies. In fact, if this issues were not brought to my attention, I wouldn’t really notice them). In short, Resident Evil 2 Remake looks, runs and plays great on the PC!