PREY was one of the most anticipated games of 2017. However, and given Arkane’s history, we were a bit worried about the state of its PC version. Arkane did not release any PC demo, its previous title – Dishonored 2 – had (and still has) major performance issues, and the latest CRYENGINE-powered game – Sniper: Ghost Warrior 3 – suffered from performance issues. Add to this that Bethesda declined sending us a review code (actually Bethesda did send us, however it passed under our radar) and you’ve got yourself a game that, on paper, seems to be doomed. However, we can safely say that PREY runs extremely well on the PC platform. 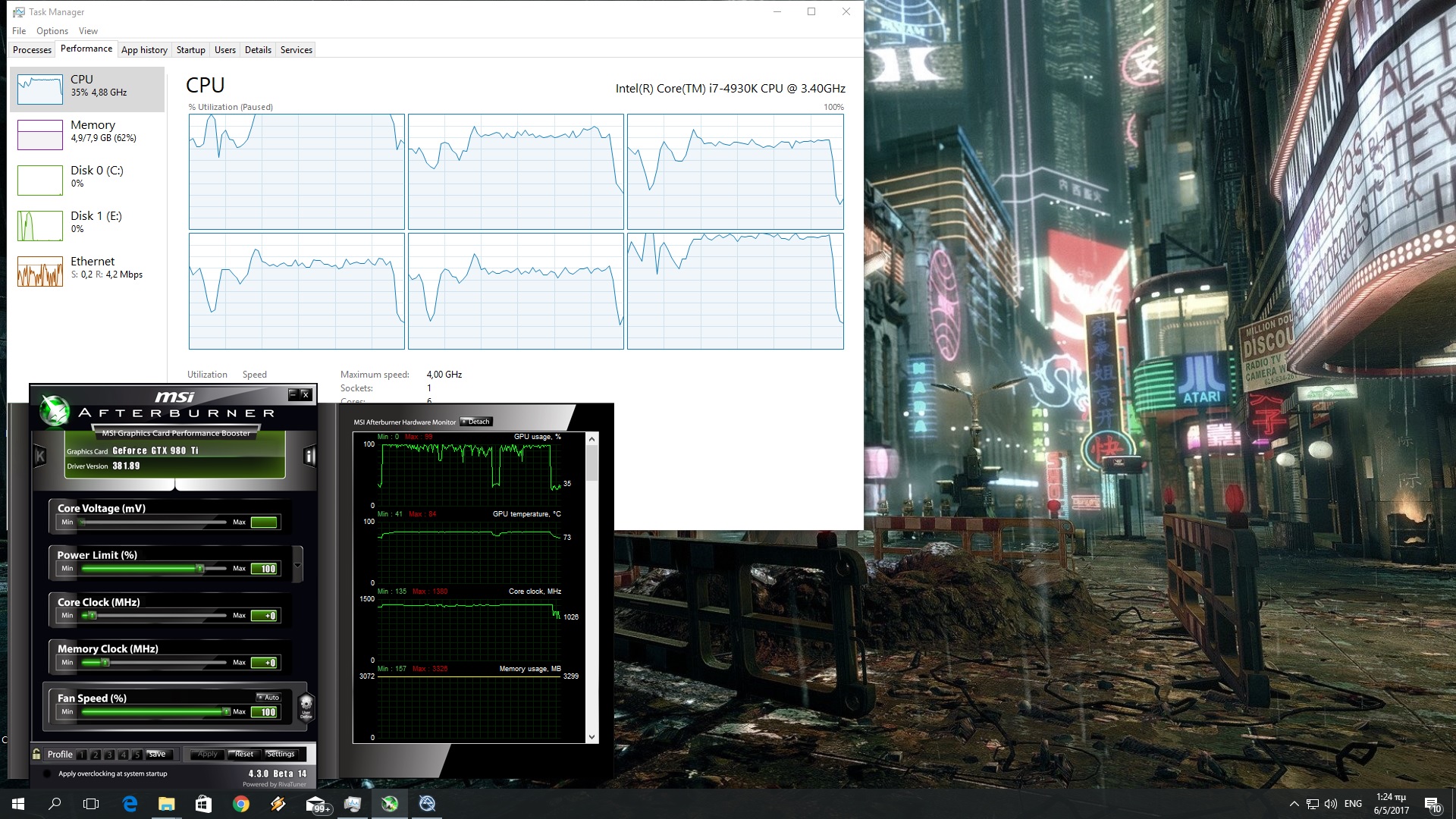 For this PC Performance Analysis, we used an Intel i7 4930K (overclocked at 4.2Ghz) with 8GB RAM, NVIDIA’s GTX980Ti and GTX690, Windows 10 64-bit and the latest WHQL version of the GeForce drivers. NVIDIA has already included an SLI profile for this title, however we noticed some stuttering issues with these new drivers (that were not present in the previous drivers). As such, we strongly suggest using the previous drivers until NVIDIA fixes this issue.

Therefore, if you are an SLI owner and are using an older version of the GeForce drivers, you can enable SLI by using these SLI compatibility bits.

Even though it is powered by CRYENGINE, PREY comes with a limited amount of graphics settings. PC gamers can adjust the quality of Objects, Shadows, Textures, Anisotropic Filtering, Anti-aliasing, Screen Space Directional Occlusion and Screen Space Reflections. Arkane will also add a FOV slider in a future patch, however PC gamers can already adjust via editing the game’s configuration file. Moreover, there is no option to disable Motion Blur, and the framerate is locked at 144fps (though you can set the framerate to 999fps via the game’s config file). 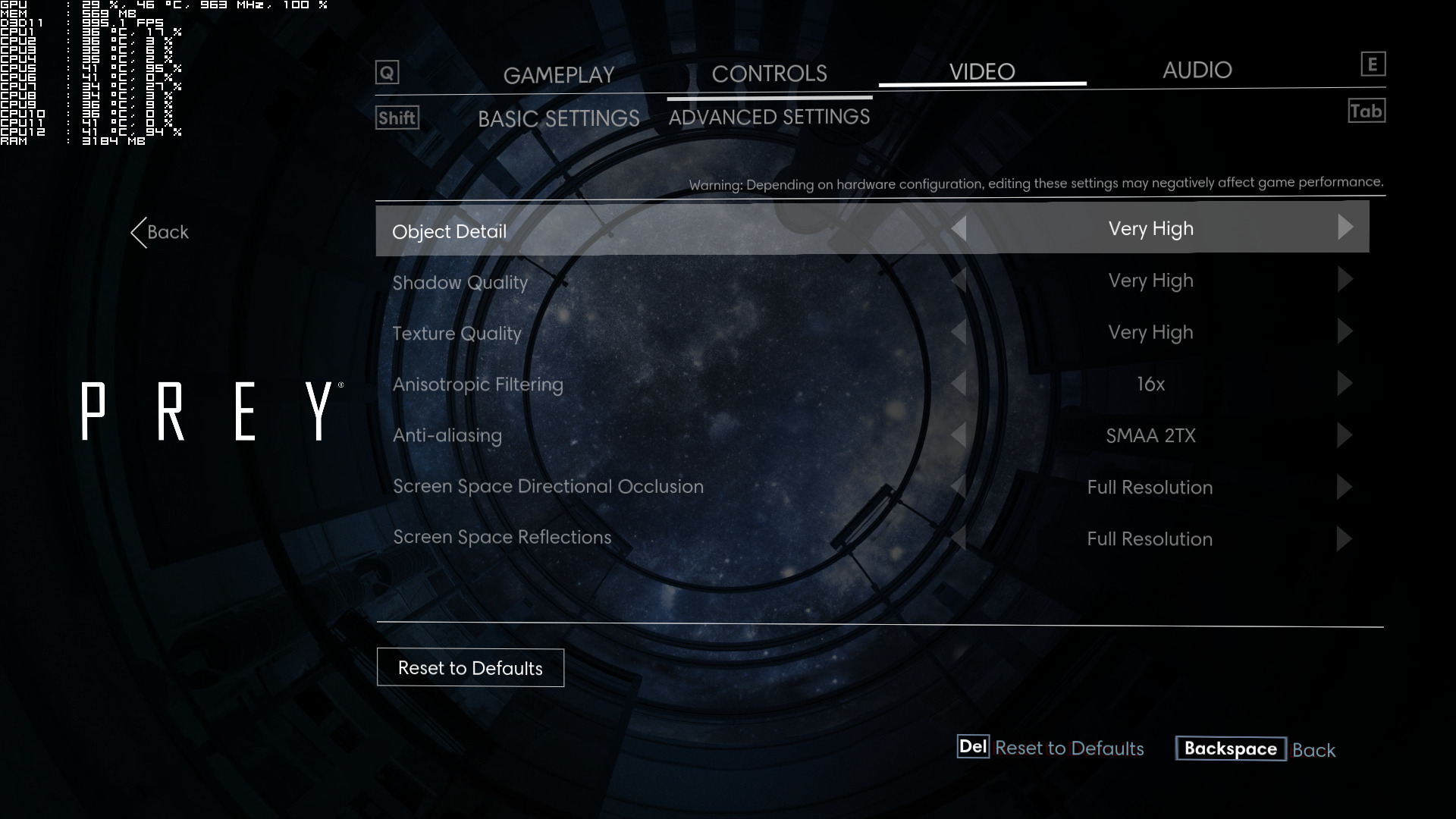 Here is how you can “unlock” the framerate and adjust your FOV:

In order to find out how the game performs on a variety of CPUs, we simulated a dual-core and a quad-core CPU. While there are performance differences between a modern-day dual-core and a six-core system, the game can be fully enjoyed with a constant 60fps experience on the former setup. As we can see, our simulated dual-core system (with Hyper Threading enabled) was able to push a constant 70fps experience at 1080p on Very High settings. Both our simulated quad-core and six-core systems were able to offer an amazing performance, though we do have to note that there was a 17fps difference between them. Not only that, but our simulated quad-core system saw 10fps boost the moment we enabled Hyper Threading. 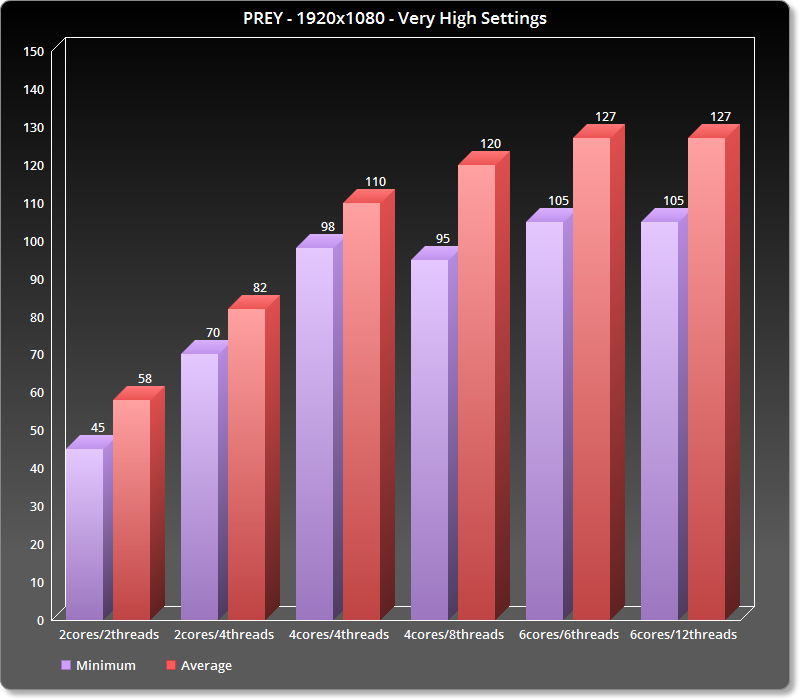 It’s worth noting that we did find some scenes during which our GPU was underused. Whether this is due to the main CPU core being maxed out (which is doubtful due to CRYENGINE’s incredible multi-threading capabilities) or due to an increase of draw calls (as the game is using DX11) remains to be seen. 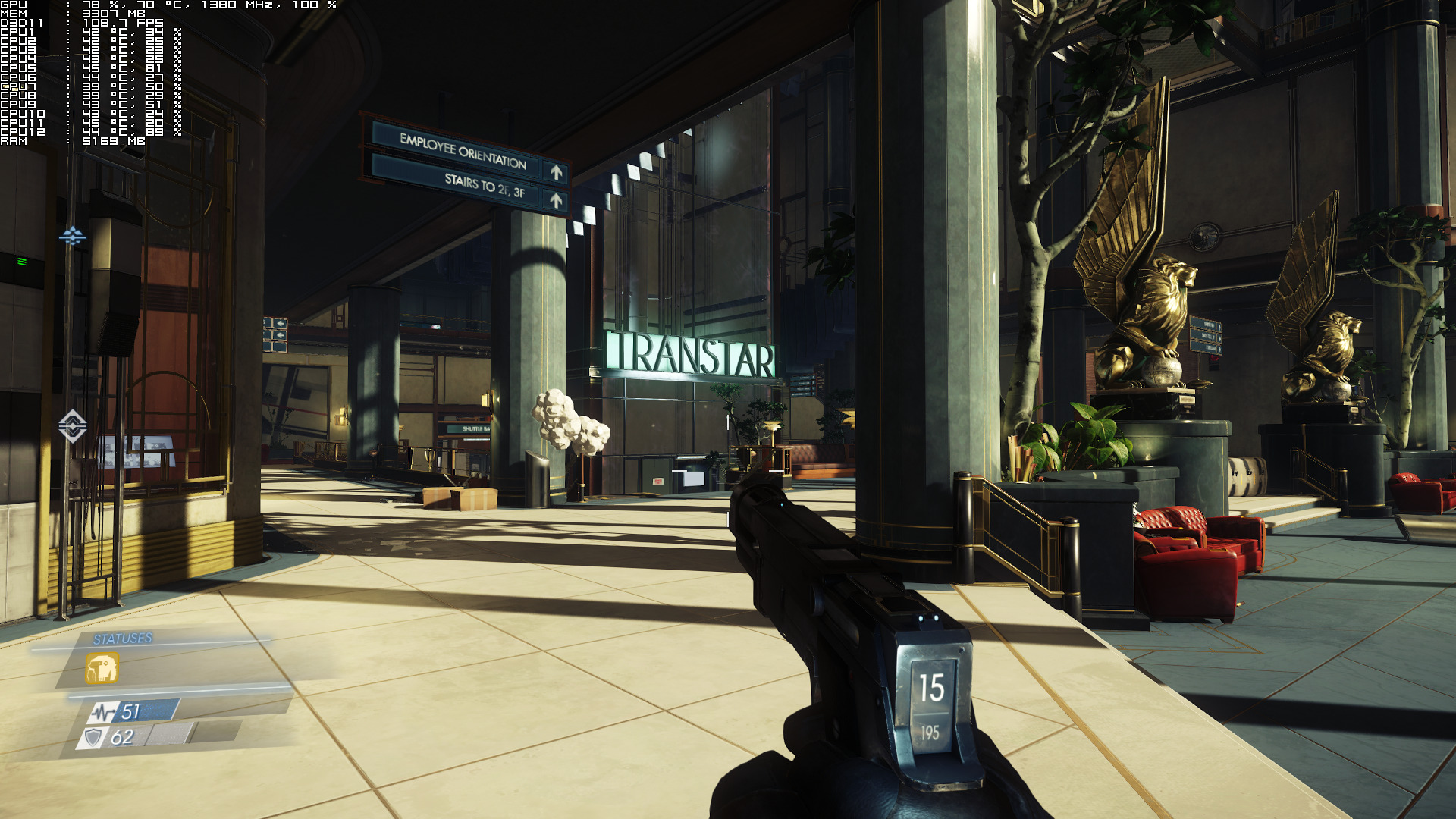 The game comes with four graphical presets: Low, Medium, High and Very High. In order to measure the performance impact of these presets, and to avoid any of the aforementioned minor CPU optimization issues, we used the following two scenes during which our GTX980Ti was used at 98%. Do note that these scenes are representative of what PC gamers can expect from pretty much all scenes found in Arkane’s title. 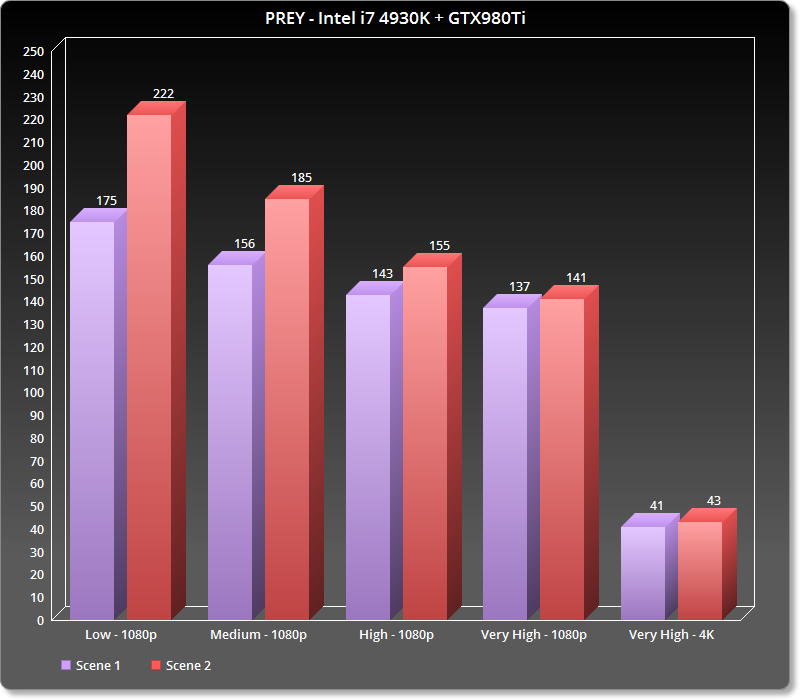 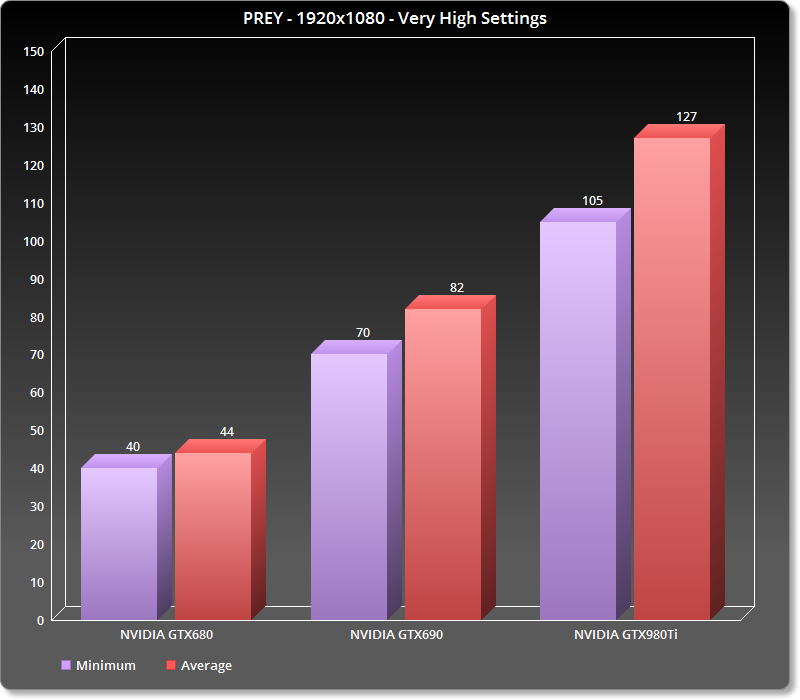 Before closing, we really need to mention something that caught our attention. The in-game VSync setting appears to be bugged (or does not work ideally in this title). With VSync enabled, we noticed jerky movement while looking around with the mouse (even though the game was running with more than 100fps on our 120Hz monitor). With VSync disabled, mouse looking was smooth, however there was a lot of tearing. We’ve never experienced this amount of tearing in any other CRYENGINE game, so we are a bit puzzled by all of this. Whether this is something that can be addressed by a future patch – or a new NVIDIA driver – remains to be seen.

Although it’s powered by CRYENGINE, PREY does not push the graphical boundaries of FPS titles. Yes, the game is beautiful and pleasing to the eye, however we noticed a lot of pop-in issues (even on Very High settings) and the character models are not as detailed as those found in other triple-A games (like Call of Duty or Battlefield). Higher quality/resolution textures could also benefit this game. This does not mean that, tech wise, the game is a disappointment. Contrary to a lot of modern-day games, most light sources cast dynamic shadows in PREY, and players can interact with a lot of objects. Still, we believe that CRYENGINE is able to offer better visuals than those featured in Arkane’s latest title.

In conclusion, PREY performs pretty great on the PC platform. While the game does suffer from some minor optimization issues during some scenes, it can run with a stable 60fps on a variety of PC systems. The keyboard/mouse control scheme has been implemented ideally in this title, and we did not notice any mouse acceleration/smoothing issues. Arkane promised to add an in-game FOV slider via a future patch, though we’d appreciate if the team could also fix the game’s jerkiness when VSync is enabled, and offer in-game options to unlock the framerate and disable Motion Blur. Honestly though, we are pleasantly surprised by how polished the PC version actually is. Well done Arkane, well done! 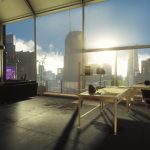 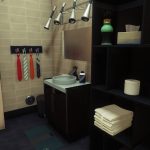 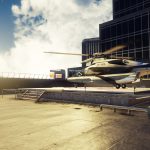 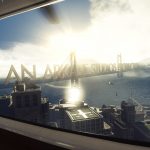 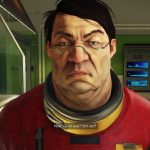 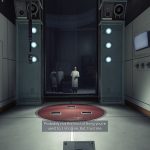 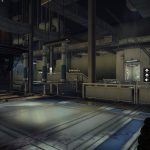 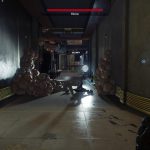 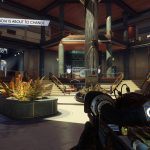 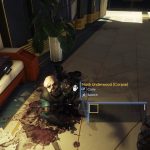 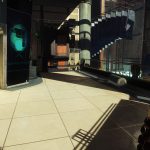 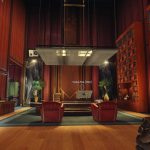 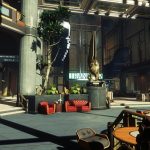 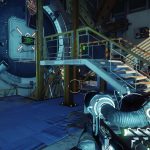 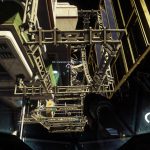 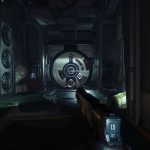 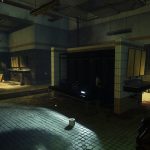