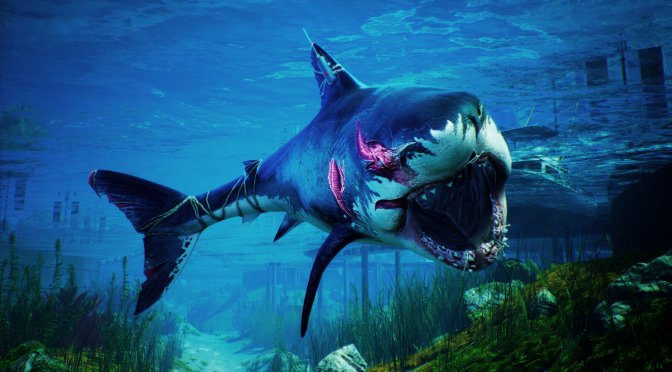 Maneater is a new third-person shark adventure game that will come out later today on the PC, exclusively via Epic Games Store. The game is using Unreal Engine 4 and it’s time now to benchmark it and see how it performs on the PC platform. 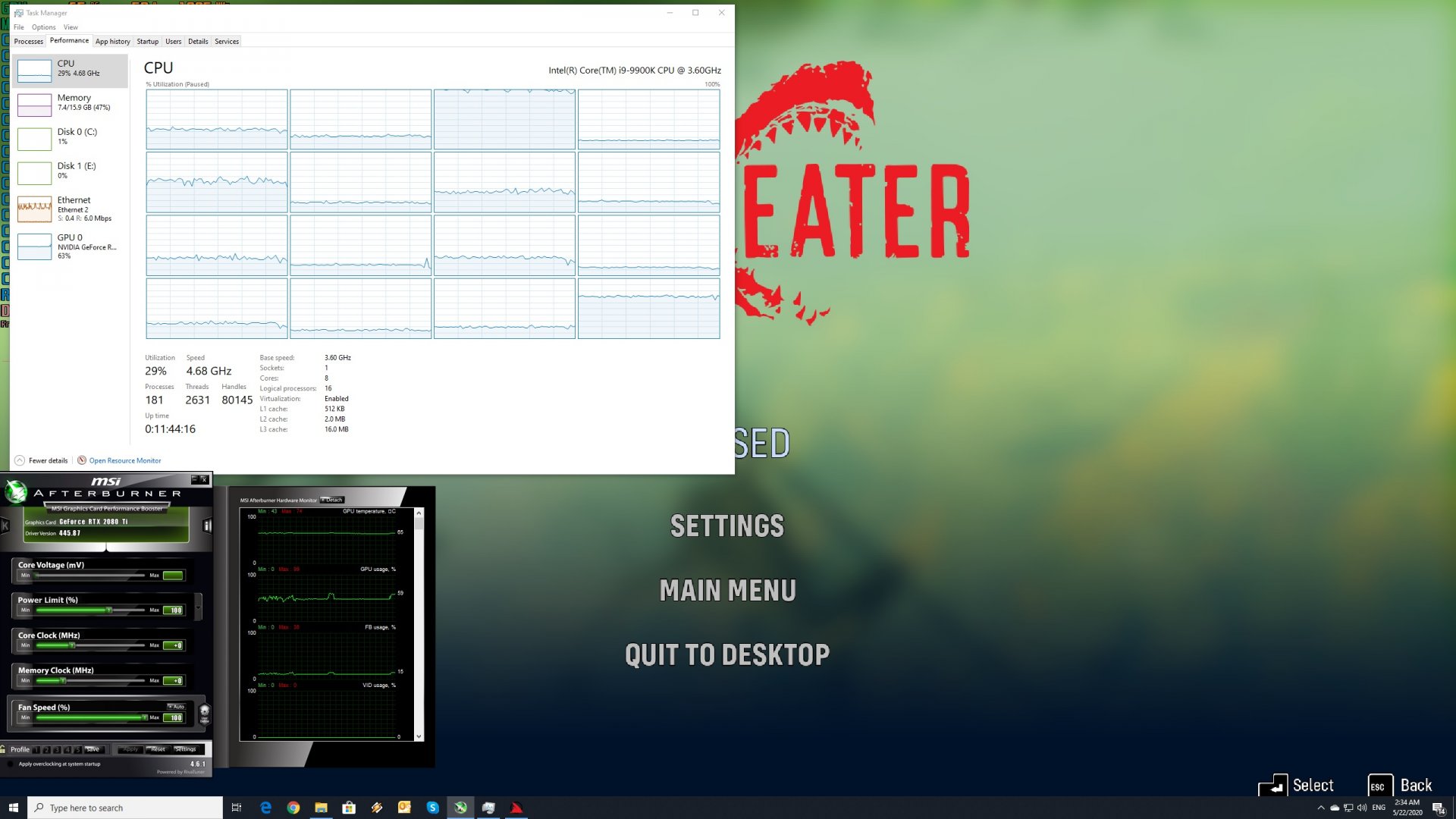 Tripwire Interactive has added a few graphics settings to tweak. PC gamers can adjust the quality of View Distance, Shadows, Anti-aliasing and Textures. There are also options for Effects, Post-processing and Foliage. 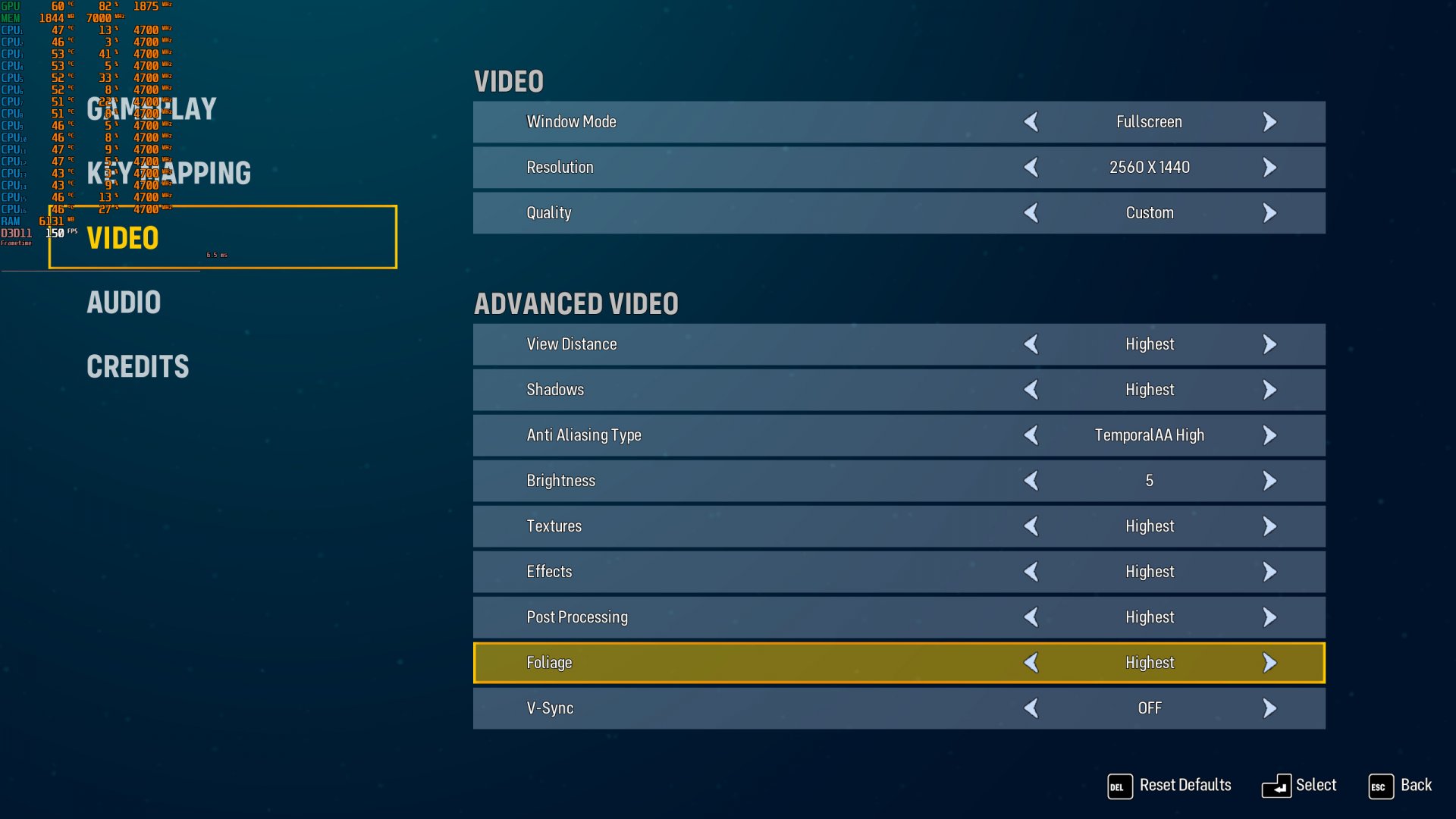 Maneater does not feature any built-in benchmark tool. As such, we’ve decided to benchmark the second main area which appeared to be more demanding than the previous ones.

In order to find out how the game scales on multiple CPU threads, we simulated a dual-core, a quad-core and a hexa-core CPU. And, as we you can clearly see from out Task Manager screenshot, the game mainly uses a single CPU thread. Without Hyper Threading, our simulated dual-core was unable to offer an acceptable performance due to severe stutters. With Hyper Threading enabled, we were able to get a constant 100fps at 1080p/Max settings. We also did not experience any performance differences in our other setups. Additionally, we can confirm that older CPUs, like the Intel Core i7 4930K can provide a smooth 60fps experience. 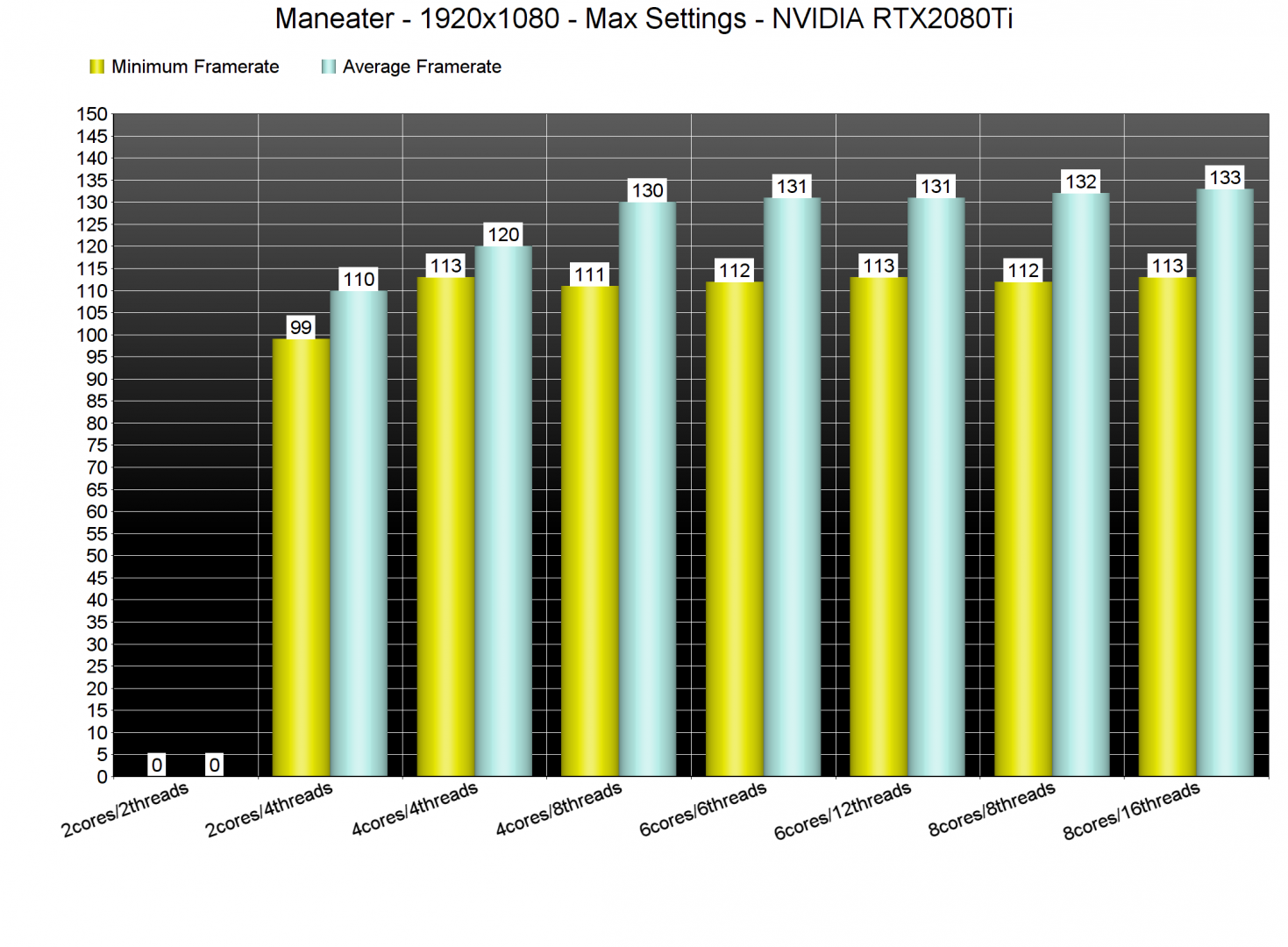 Similarly to its CPU requirements, Maneater does not require a high-end GPU. And while there is a framerate cap at 150fps, most PC gamers will be bottlenecked by their CPU. In fact, our Intel i9 9900K was bottlenecking our RTX2080Ti at both 1080p and 1440p. Still, and despite these CPU limitations, the game can run with constant 60fps on a wide range of graphics cards. 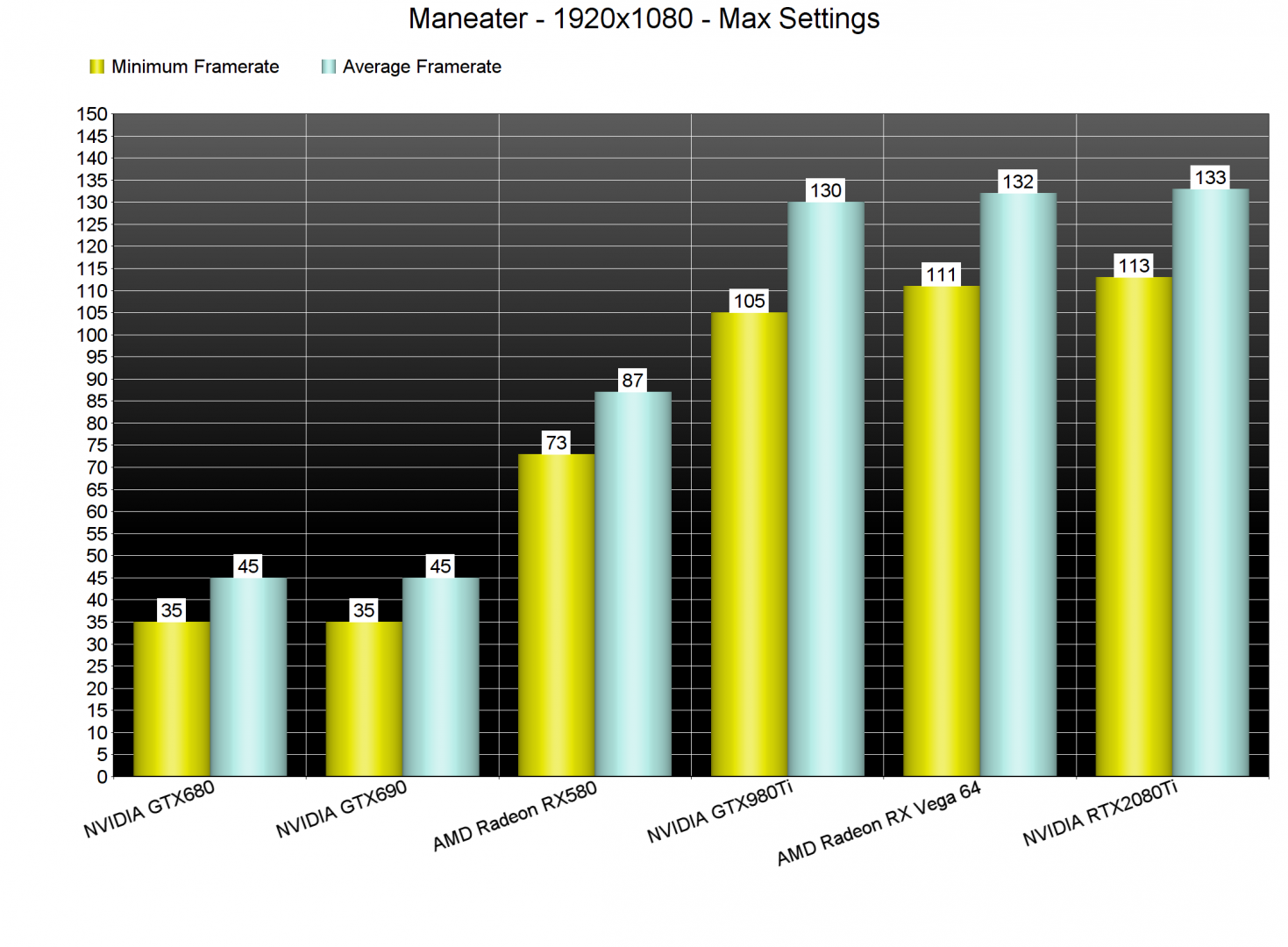 Unfortunately, we could not enable any 4K resolutions on our 1440p monitor. We’ve tried everything; from using custom resolutions and setting our desktop res to 4K, to using DSR and editing the .INI file. Sadly, nothing worked.

At 2560×1440, our three most powerful graphics cards had no trouble at all running the game. 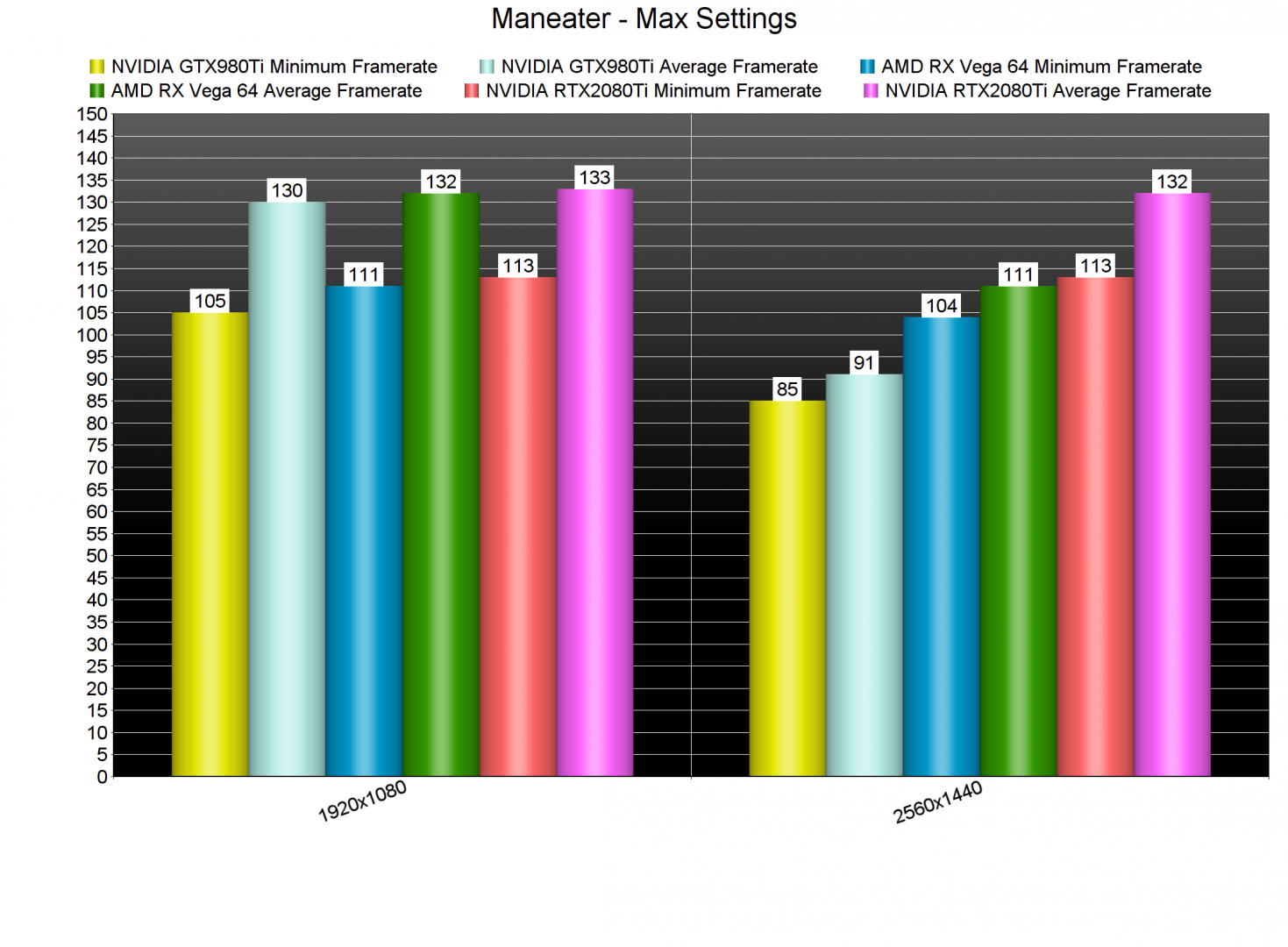 Graphics wise, Maneater looks cool. There are some neat lighting effects and most of the textures are high-res. This is to be expected though as Maneater takes advantage of Quixel Megascans. There are also some cool light shafts, and you can interact with the aquatic plants. Still, some of the human characters are not as detailed as we’d hoped, and there are some underwhelming special effects. For the most part, Maneater looks great. It’s not mind-blowing, but it’s pleasing to the eye.

Overall, Maneater looks and runs well on the PC platform. Still, and as we’ve already reported, the game uses the Denuvo anti-tamper tech. Moreover, we did notice some stutters while exploring the ocean. I don’t know whether the anti-tamper tech is the culprit here, however, there are some minor annoying stutters here and there. Apart from these stutters, there is nothing to really complain about here. The game does not require a high-end PC system, can scale on older hardware, and does not have any mouse acceleration issues. Let’s hope that Tripwire will address these stutters in a future patch.