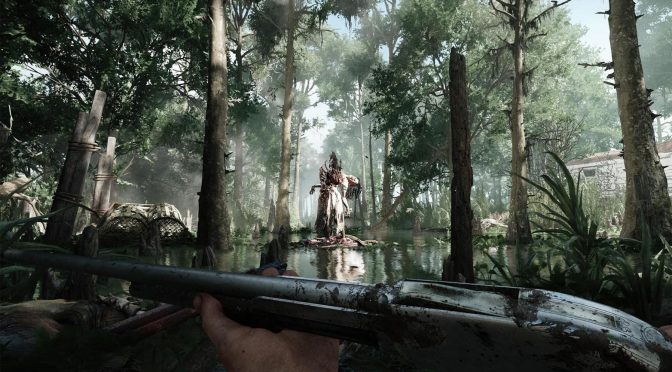 Crytek’s competitive first-person PvP bounty hunting game, Hunt: Showdown, has just been released. Powered by CRYENGINE, this new shooter is a showcase of what Crytek’s engine can deliver in 2019. As such, we’ve benchmarked this title in order to see how it performs on the PC platform. 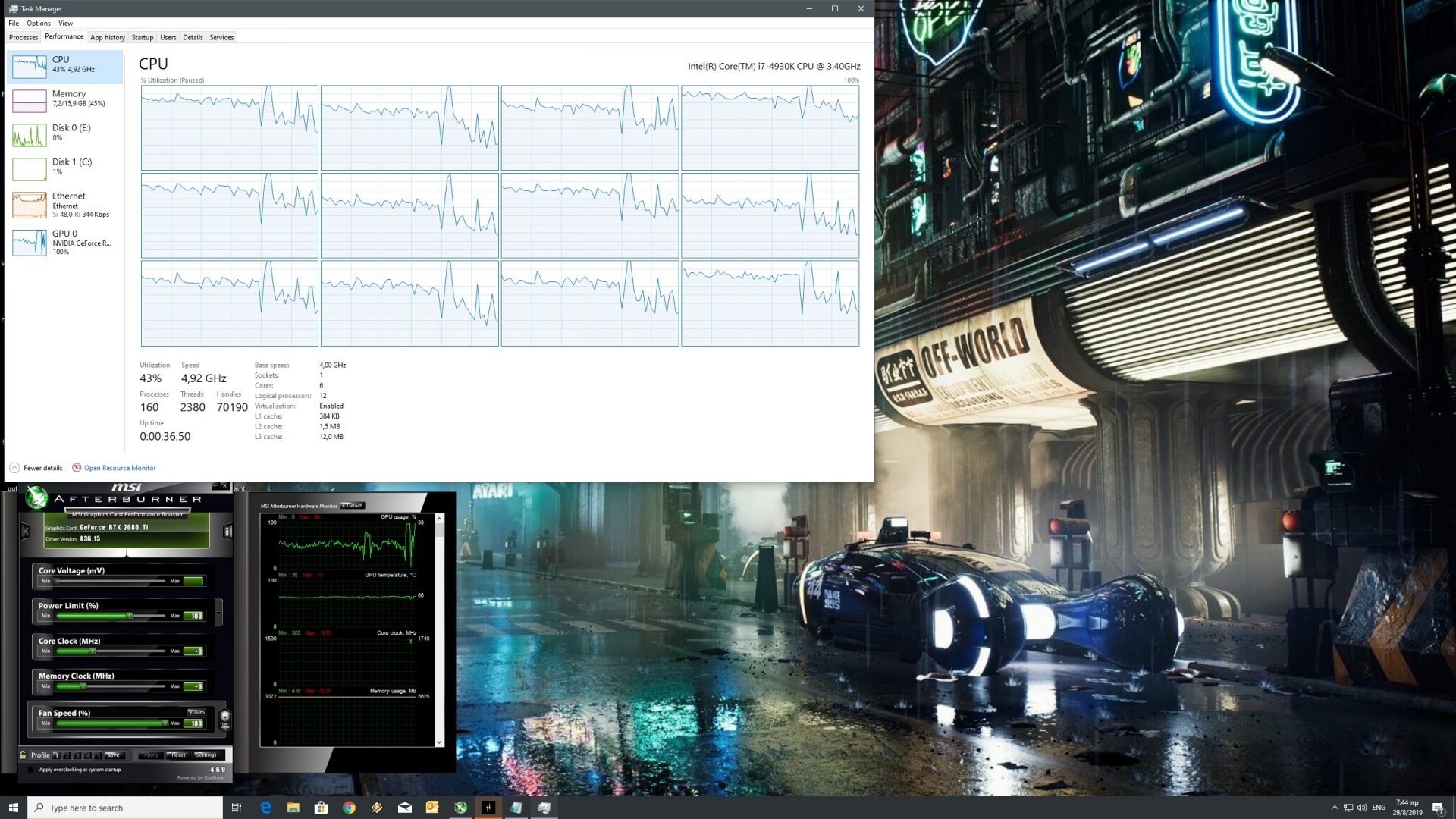 Crytek has added a few graphics settings to tweak. PC gamers can adjust the quality of Objects, Textures, Texture Filtering, Anti-Aliasing, Lighting, Shadows,Effects, Post-Process and Particles. There are also options for showing the Performance Stats, as well as for Motion Blur and Depth of Field. Furthermore, the game includes four advanced settings. These are: Surface Format Optimization, GPU Tessellation, 2 Pass Scene Rendering and 2 Pass Lighting. 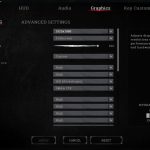 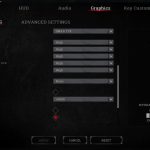 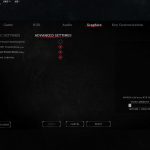 Back in 2018 when we first tested the game’s closed beta version, we were hugely disappointed by its performance. Hunt Showdown was running really awful on our Intel i7 4930K. However, it appears that Crytek has improved things. Unfortunately, though, the game uses DX11 and not DX12 or Vulkan, meaning that there are still some optimization issues on older hardware. In other words, the game could perform even better on the very same hardware if Crytek adopted a newer API.

In order to find out how the game scales on multiple CPU threads, we simulated a dual-core and a quad-core CPU. Without Hyper Threading, our dual-core system was unable to run the game due to severe stuttering. With Hyper Threading active, our simulated dual-core system was able to push a minimum of 44fps and an average of 68fps. Our simulated quad-core system, on the other hand, was able to come closer to a 60fps experience (without Hyper Threading). When we enabled HT, we were able to get a constant 60fps experience. Now while the game scaled on all of our twelve CPU threads, it did not stress our hexa-core CPU. This obviously means that our memory limited us at 1080p/Max settings, something that wouldn’t be the case on both AMD’s and NVIDIA’s hardware provided Crytek used DX12 or Vulkan. 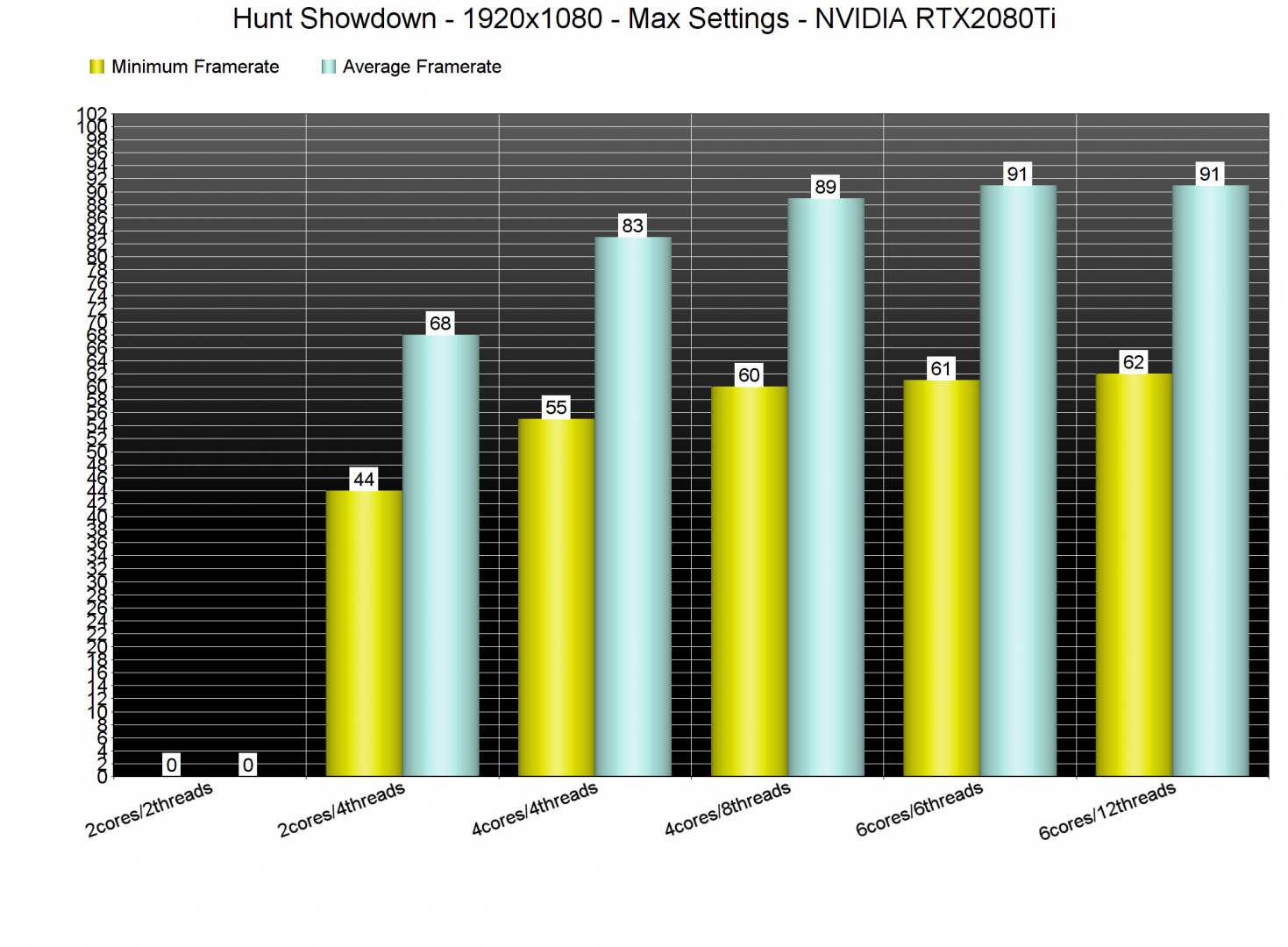 At 1080p/High settings (the game does not feature any Very High or Ultra settings), most of our GPUs were able to offer a smooth gaming experience. To be honest, we were pleasantly surprised by the performance of the RX580. While there were some drops to 52fps, this particular GPU had no trouble running the game with an average of 63fps. 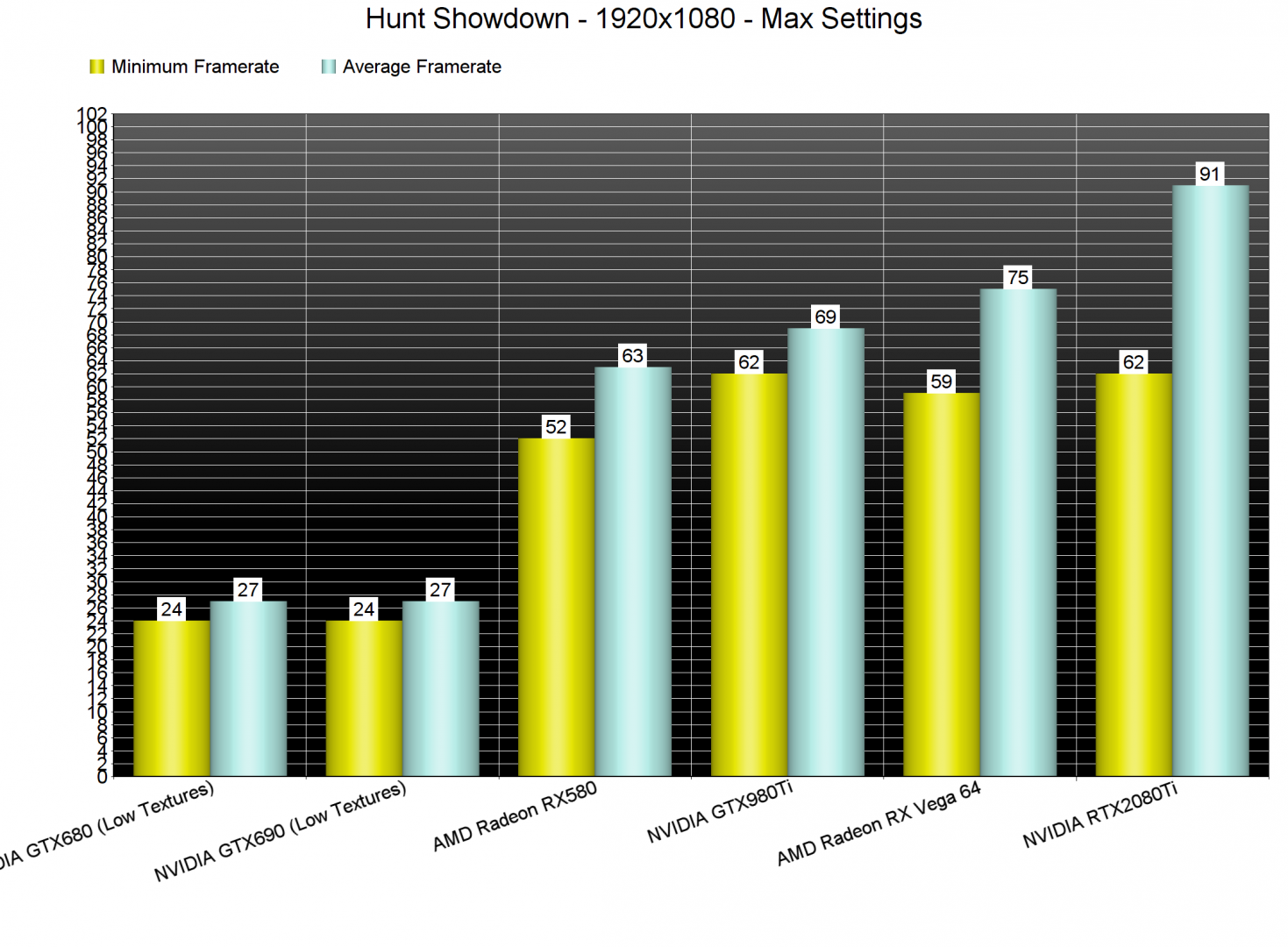 At 2560×1440, the only GPU that was able to offer a constant 60fps experience was the NVIDIA GeForce RTX2080Ti. As for 4K, NVIDIA’s most powerful gaming GPU was unable to offer a smooth gaming experience. However, in our custom 4K resolution (3325×1871) the game ran with constant 60fps. So yeah, owners of the RTX2080Ti will able to enjoy the game at almost 4K/Max settings. 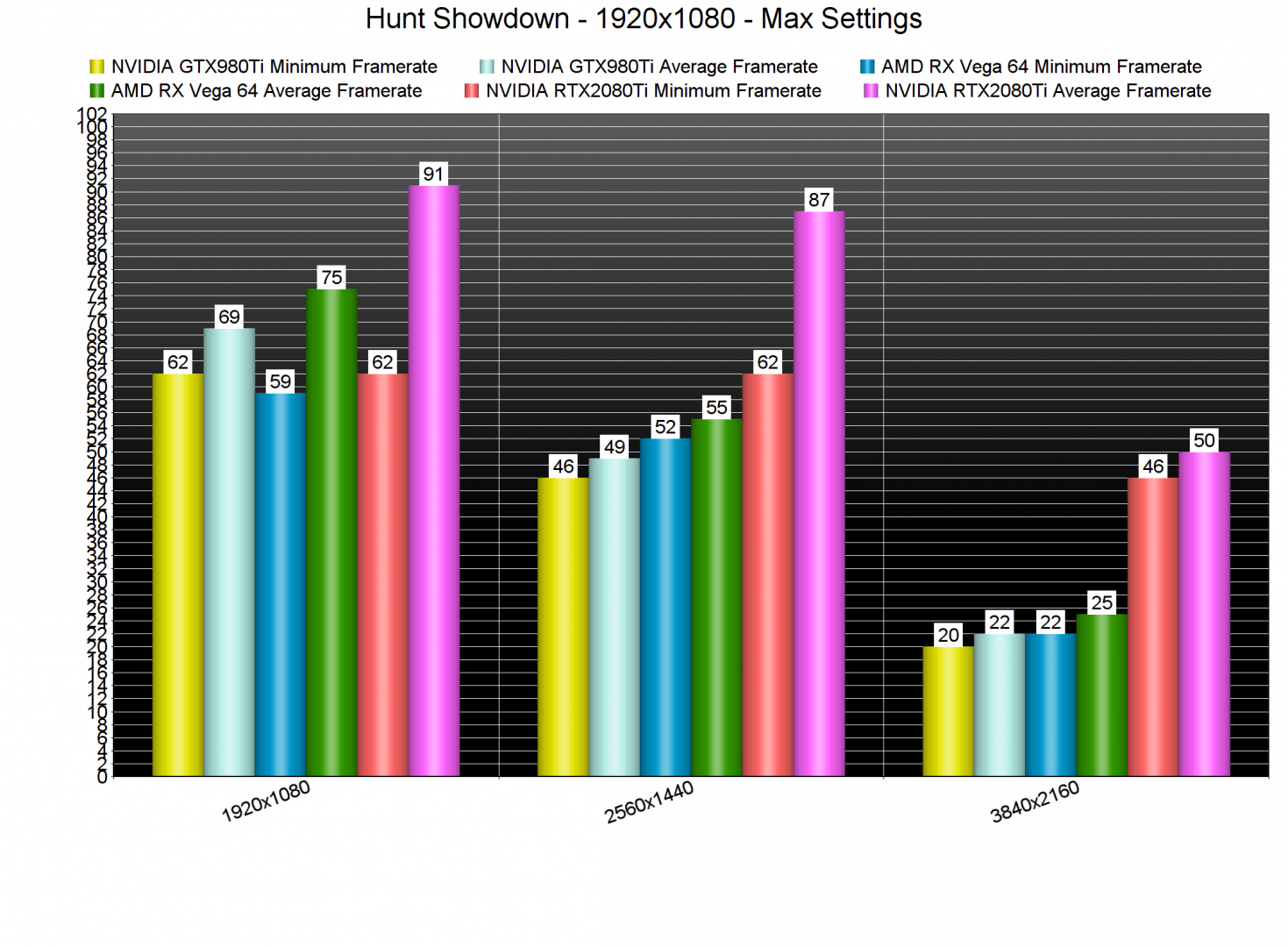 Graphics wise, Hunt: Showdown looks great. Crytek has created some gorgeous forest areas, and the tessellation effects on the ground a nice touch. The vegetation and tree textures look absolutely stunning, and we really have to congratulate Crytek’s artists for achieving such great results. Moreover, all of the in-game characters are nicely detailed, and the game’s fog effects are also really cool. Hunt Showdown could have been one of the most beautiful games on the PC if it wasn’t for two major issues.

The first issues is the ridiculously awful LOD system. Even on High settings, the LOD is really low and there are major pop-in issues. Seriously, this is one of the most aggressive LOD systems we’ve ever seen. The second issue is the Screen Space Reflections. Due to a lot of dynamic objects (like animals, weapons, chains and more), the water reflections are constantly “breaking”. This is the biggest flaw of Screen Space Reflections and, ironically, the game’s reflections look worse than those in Crysis 3. While Crysis 3 did not use SSR, it had some truly amazing water reflections. Yes, they were achieved via “tricks” and “hacks” however they are still better than what we got in Hunt: Showdown.

All in all, Hunt: Showdown runs significantly faster than its closed beta or Early Access builds. A lot of modern GPUs will be able to run the game at 1080p. Once you increase the resolution, though, things get ugly and only the most powerful GPUs can handle it. Moreover, the game runs smoothly and with 60fps on older CPUs, something that will please a lot of gamers.

However, and despite these improvements, the DX11 API is still holding back the game on older PC systems. Obviously, newer systems can overcome this optimization issue. Still, this does not mean that there isn’t room for improvement. PC gamers should not rely on using more powerful systems just so they can overcome optimization issues. If that was the case, Crytek wouldn’t be improving the game’s performance since its closed beta build. The team could have simply suggested using a next-gen CPU and call it a day. Well, that’s not what optimization is, and PC gamers should demand developers to take full advantage of their systems. After all, that’s one of the reasons why Microsoft released DX12, why DICE worked on Mantle and why Vulkan is still around.