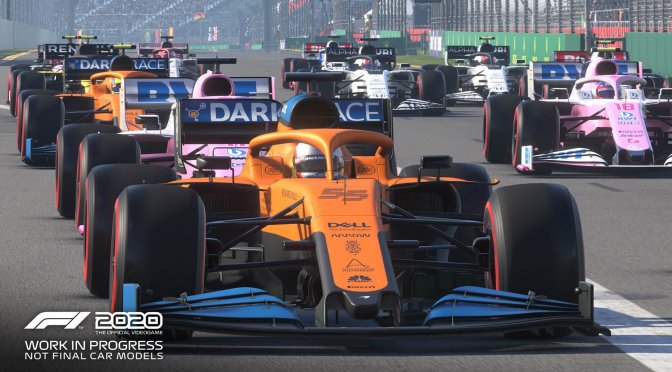 The latest part in the F1 2020 series, F1 2020, releases in a few days and Codemasters has provided us with a review code. As such, we’ve decided to benchmark this latest F1 racing game, and see how it performs on the PC platform. 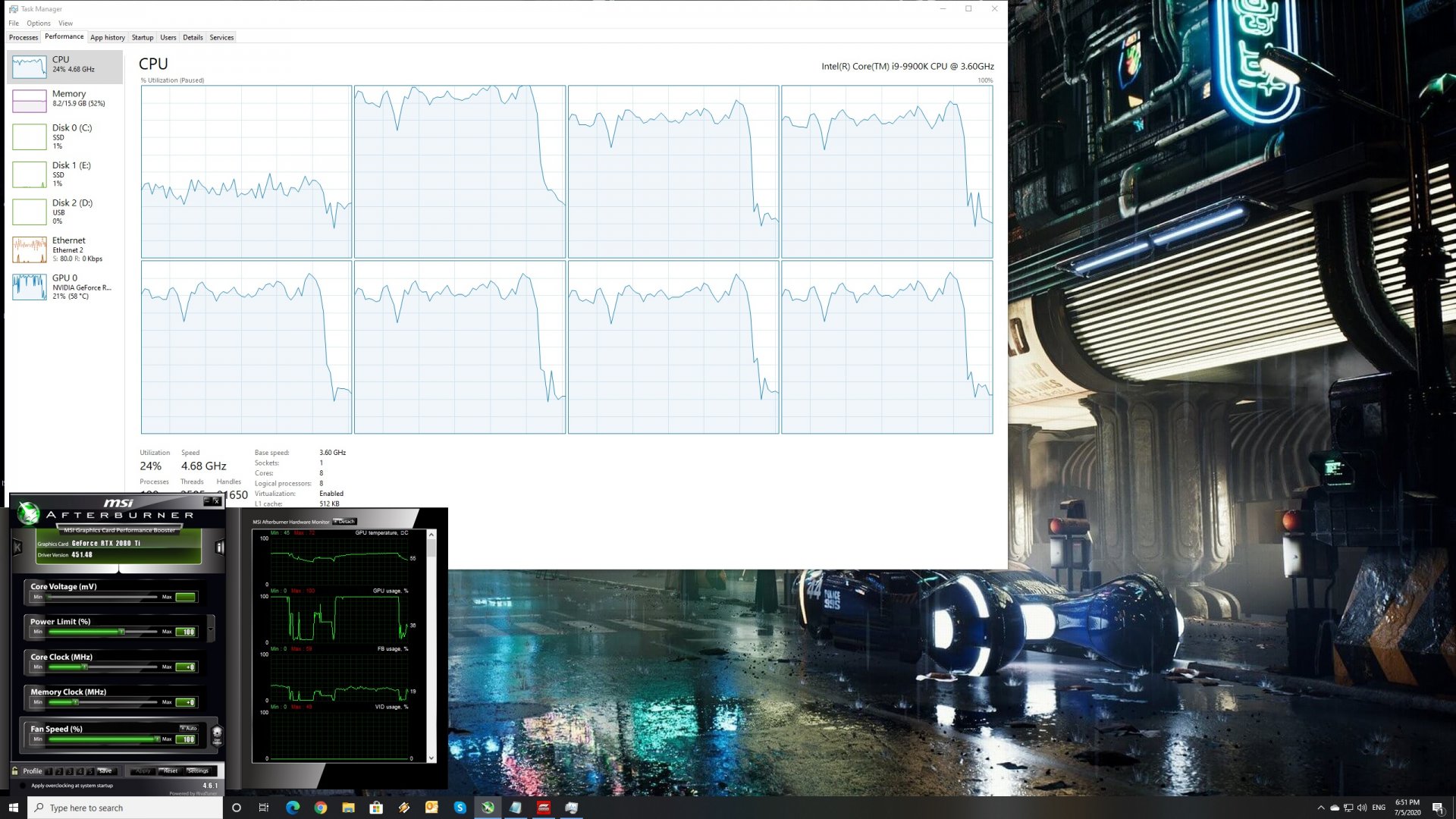 F1 2020 is using the latest version of the EGO Engine, and takes advantage of the DX12 API. Moreover, and as you may have noticed, the game supports both FidelityFX Upscaling and FidelityFX Sharpening.  These two are separate options, meaning that you can’t enable them simultaneously.

From what we know so far, F1 2020 is the first game with official support for FidelityFX Upscaling. This is a new upscaling option that works on both NVIDIA and AMD hardware. Thus, we’ve decided to test it and see how it favours over native resolutions.

As we can clearly see, FidelityFX Upscaling brings a noticeable performance increase. In 4K/Ultra settings, we were getting a minimum of 75fps and an average of 83fps on our NVIDIA RTX2080Ti. When we enabled FidelityFX Upscaling, our minimum framerate skyrocketed to 91fps. Similarly, our average framerate went to 120fps. However, FidelityFX Upscaling also introduced A LOT of aliasing. To be honest, and mainly due to these extra jaggies, it’s not really worth using this upscaling technique. After all, you can use custom resolutions in order to increase your in-game performance. And in case you’re wondering, this upscaling technique is nowhere close to what NVIDIA has achieved with DLSS 2.0. Below you can find some comparison screenshots (native 4K is on the left whereas FidelityFX Upscaling is on the right).

F1 2020 features an in-game benchmark tool that represents the in-game performance. For our tests, we’ve used the Australian track during daytime.

F1 2020 does not require a high-end CPU. In order to find out how the game scales on multiple CPU threads, we simulated a dual-core, a quad-core and a hexa-core CPU. Our simulated dual-core system was able to provide a smooth gaming experience with Hyper Threading enabled. With Hyper Threading disabled, our minimum framerate was way above 60fps. However, there were major stuttering issues that made the game unplayable. 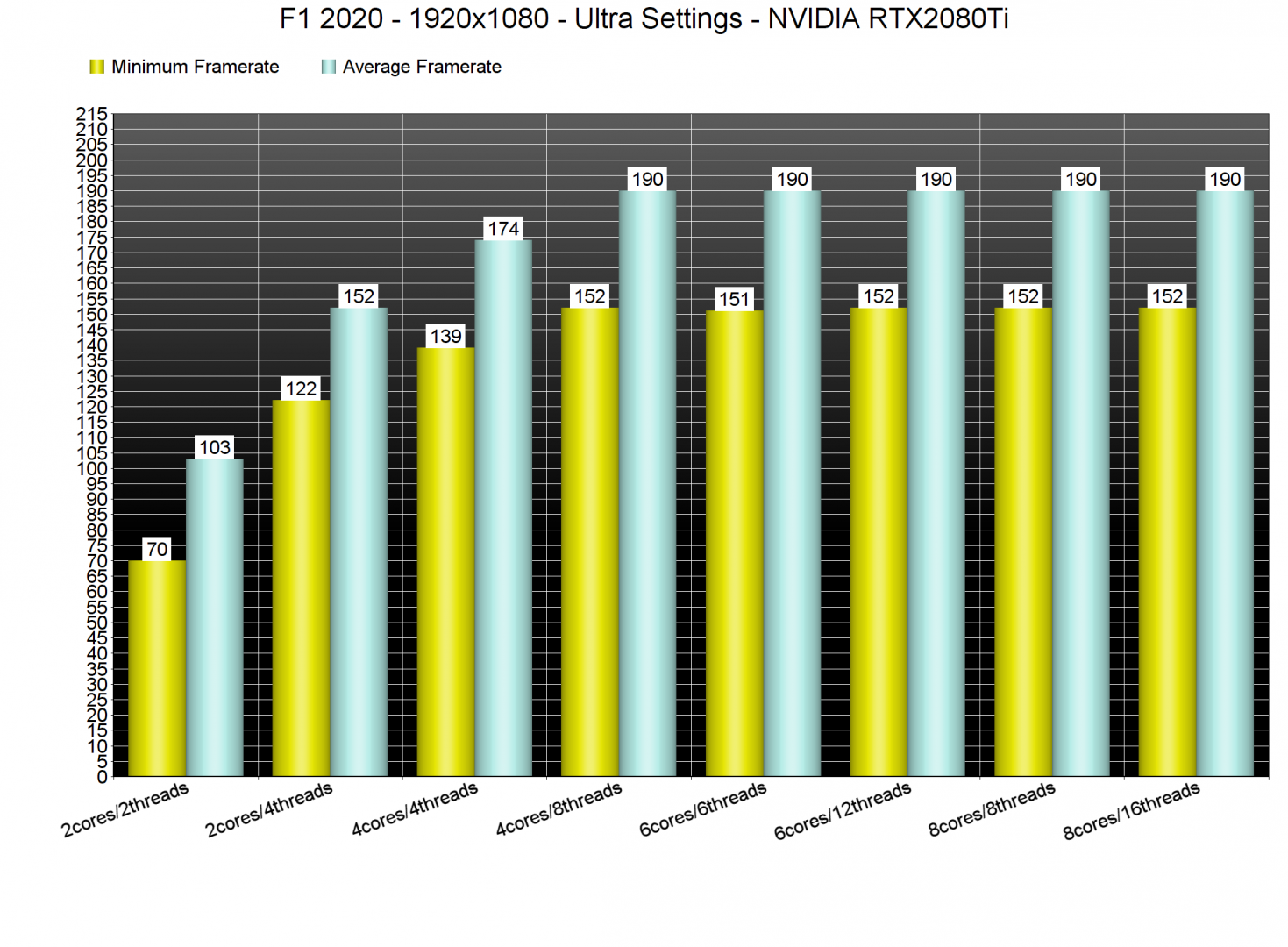 F1 2020 also performs well on older generation CPUs. Our Intel Core i7 4930K was able to push more than 100fps at 1080p/Ultra and 1440p/Ultra. Naturally, both the 9900K and the 4930K performed similarly in 4K/Ultra, as we were GPU-limited in that particular resolution. Thus, you will be able to enjoy this latest F1 racing game even if you have an old CPU. 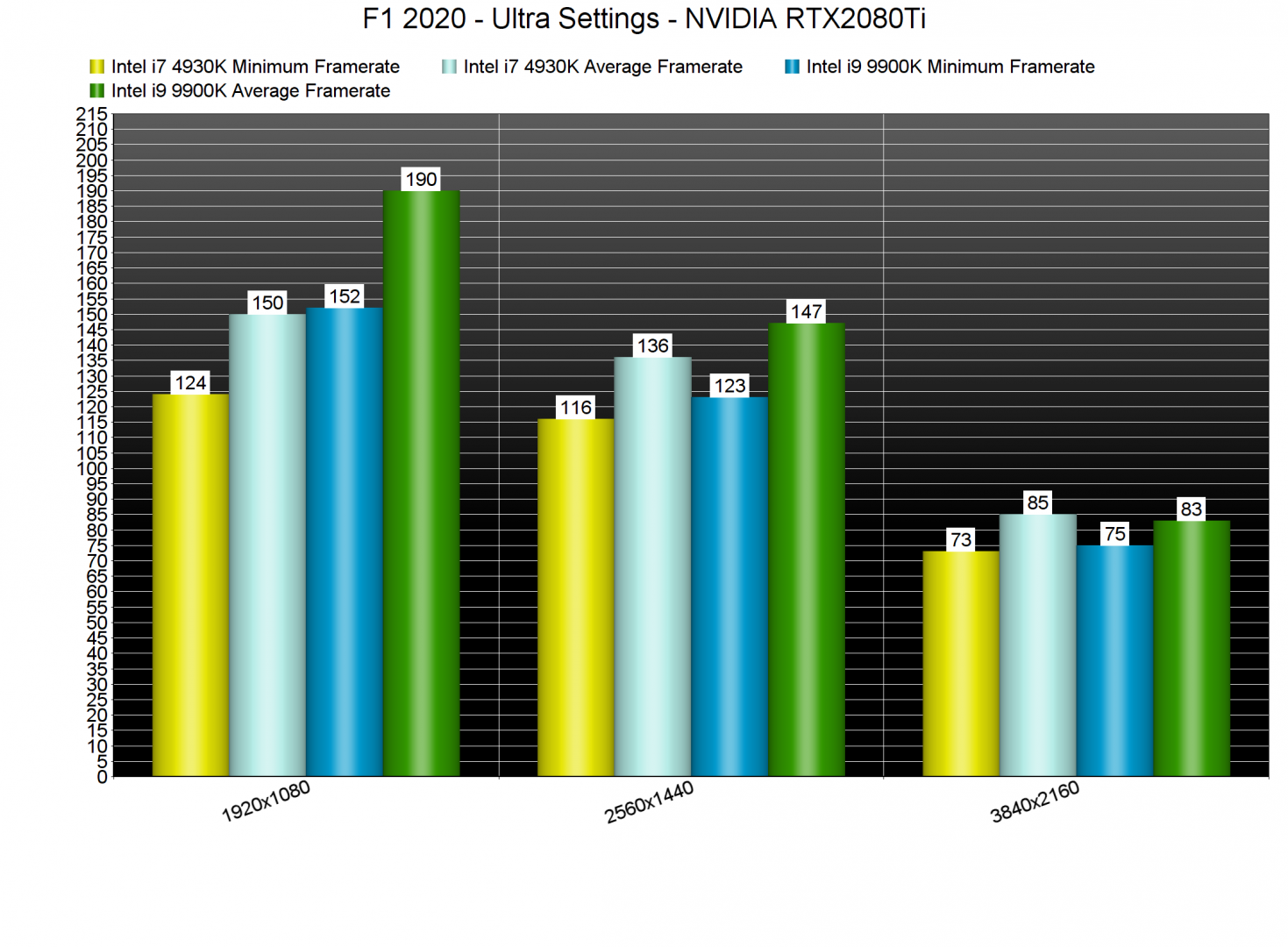 Since the game does not require a high-end CPU, we can clasify F1 2020 as a GPU-bound title. At 1080p, our three most powerful GPUs were able to offer a constant 60fps experience. Our AMD Radeon RX580 came close to it, with a minimum of 54fps and an average of 61fps. 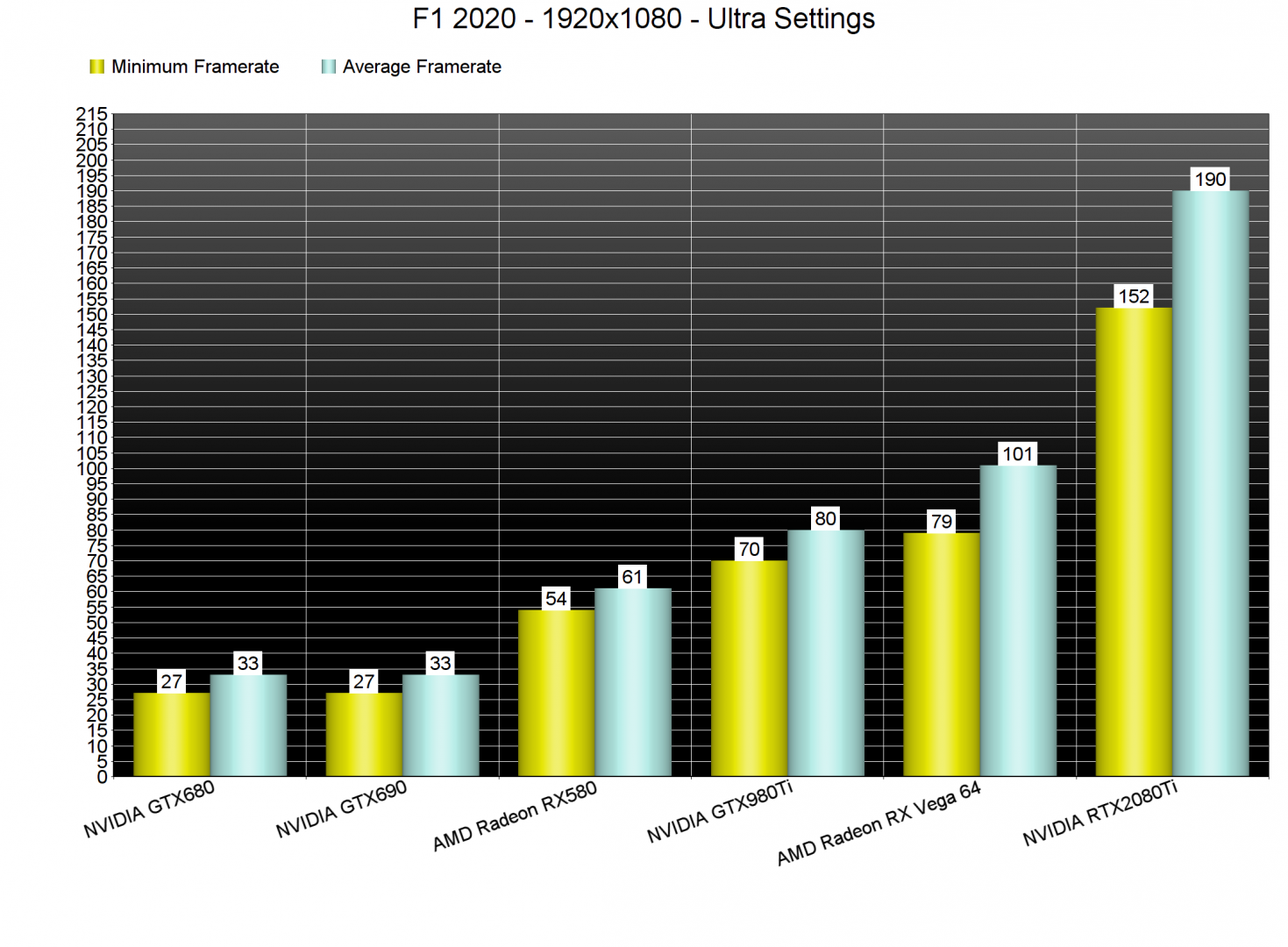 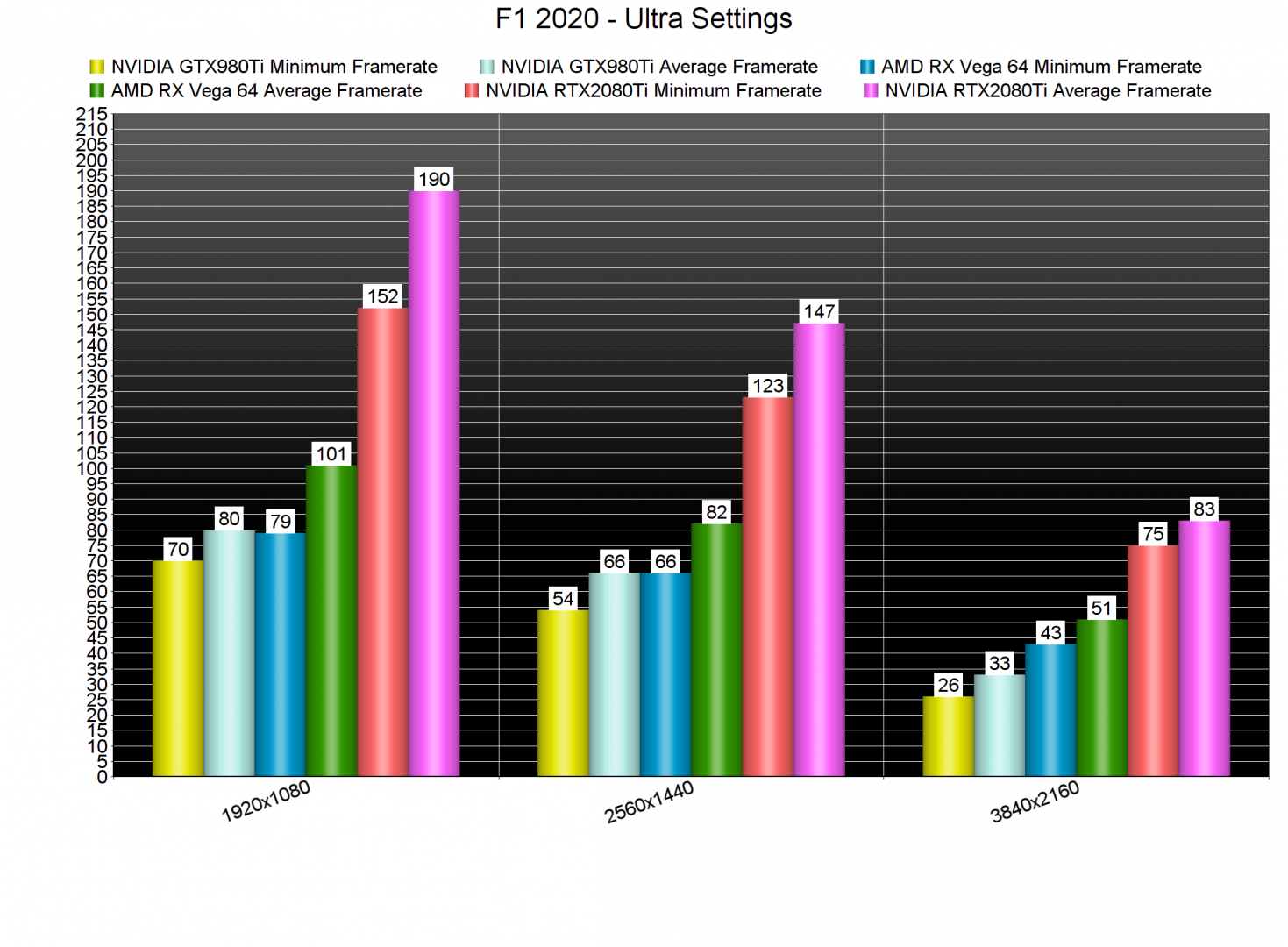 At this point, we should note that the Ultra settings do not enable the SSRT Shadows. And, as we can see below, this setting comes with a significant performance hit. Therefore, we suggest leaving it “Off” as it can cripple performance in some stages. For instance, in the Australian track our minimum and average framerates dropped to 38fps and 56fps, respectively. Seriously, it isn’t worth enabling it. 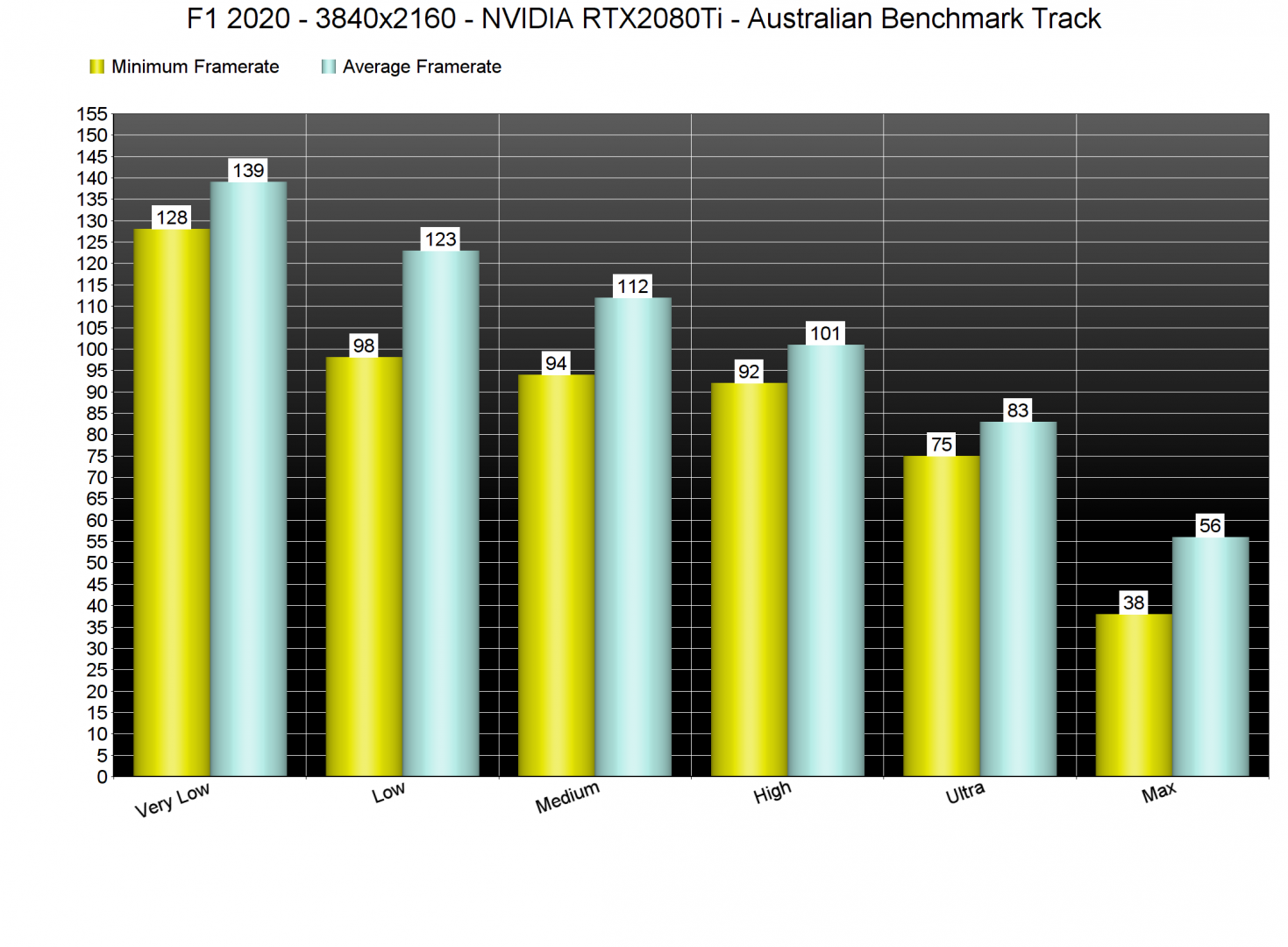 Overall, F1 2020 performs extremely well on the PC platform (obviously with the exception of the SSRT shadows). The game does not require a high-end PC system, and there are a few graphics settings via which you can improve performance. Unfortunately, the game looks almost exactly the same with F1 2019. I’m pretty sure that there are minor differences, however, the game does not pack any major graphical improvements. On the other hand, though, Codemasters has added FidelityFX Upscaling in order to increase overall performance even more. However, that option also introduces a lot of aliasing. Still, we believe it’s at least good having additional options at our disposal.

Enjoy the following benchmark video, as well as some 4K/Ultra settings screenshots!