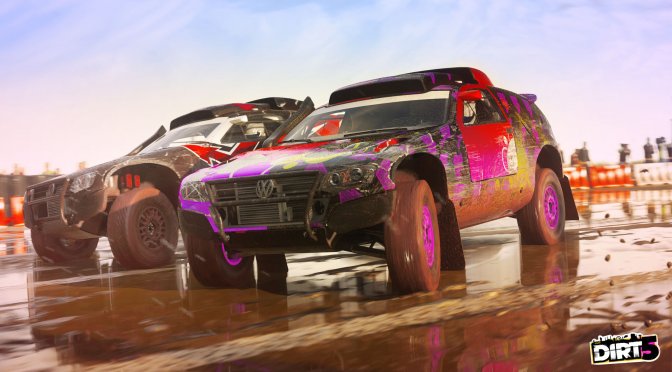 Dirt 5 releases in a few days and Codemasters has provided us with a review code. Dirt 5 is using an enhanced version of the Onrush engine, and will release on both current-gen and next-gen platforms. As such, we’ve decided to benchmark this new racing game and see how it performs on the PC platform. Dirt 5 comes with a few graphics settings to tweak. PC gamers can adjust the quality of Geometry, Tessellation, Shadows, Volumetric, Cloud, Procedural and Global Illumination. Surprisingly enough, there is no option for Texture Filtering or Textures Quality. Not only that, but there aren’t any Ray Tracing options right now. AMD and Codemasters have already showcased the game’s Ray Tracing effects, so I don’t really know why there isn’t any support for them yet. Perhaps Codemasters will add them via a post-launch update once the RX 6000 series is out? 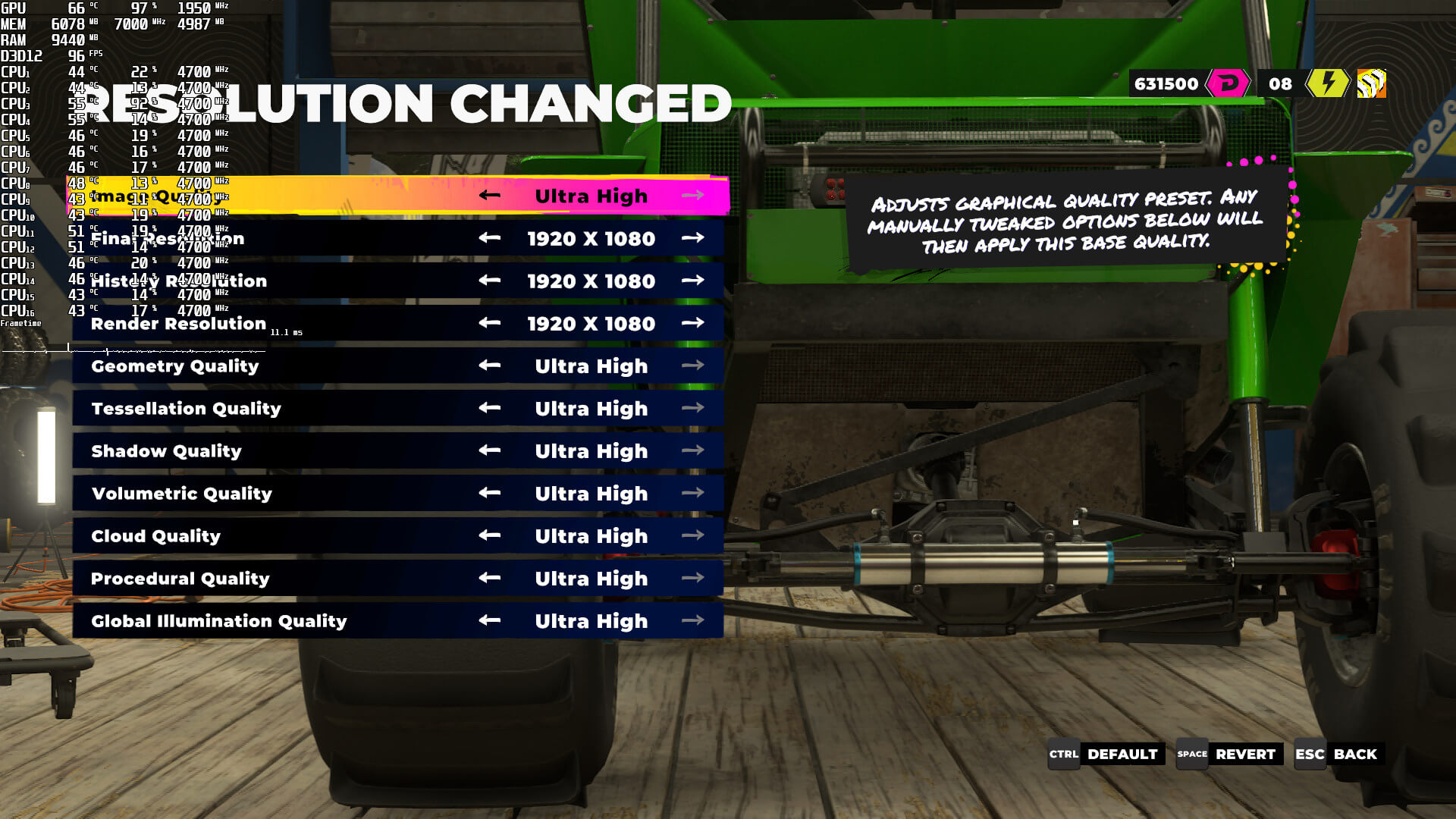 Dirt 5 features a built-in benchmark that is representative of the in-game performance. As such, we’ve used this tool for both our CPU and GPU benchmarks. For our CPU tests, we lowered our resolution to 1280x720, but kept using the game’s Ultra High settings. The game also uses DX12.

In order to find out how the game scales on multiple CPU threads, we simulated a dual-core, a quad-core and a hexa-core CPU. Unfortunately, though, it appears that Dirt 5 currently suffers from a lot of optimization issues. For starters, Codemasters has listed an Intel Core i3 2130 as the minimum required CPU. In case you weren’t aware of, the Core i3 is a 2core/4thread CPU. However, you can find below a video that shows how the game runs on an Intel CPU that has 2 cores and 4 threads. The game is literally unplayable even on the Lowest settings at 1280x720. Seriously, does Codemasters consider this playable? How on Earth does the team suggest an Intel Core i3 2130?

Not only that, but we had major stuttering issues on our simulated quad-core system. Without Hyper Threading, we were getting numerous stutters, even though none of our CPU cores was maxed out. Below you can find a screenshot showcasing this behavior. Now when we enabled Hyper Threading on our simulated quad-core system, we experienced more severe stutters. In fact, some of the stutters could last 5-6 seconds, and no, we’re not exaggerating. While our average framerate was above 60fps, our minimum framerate – due to the severe stutters – was 3fps. 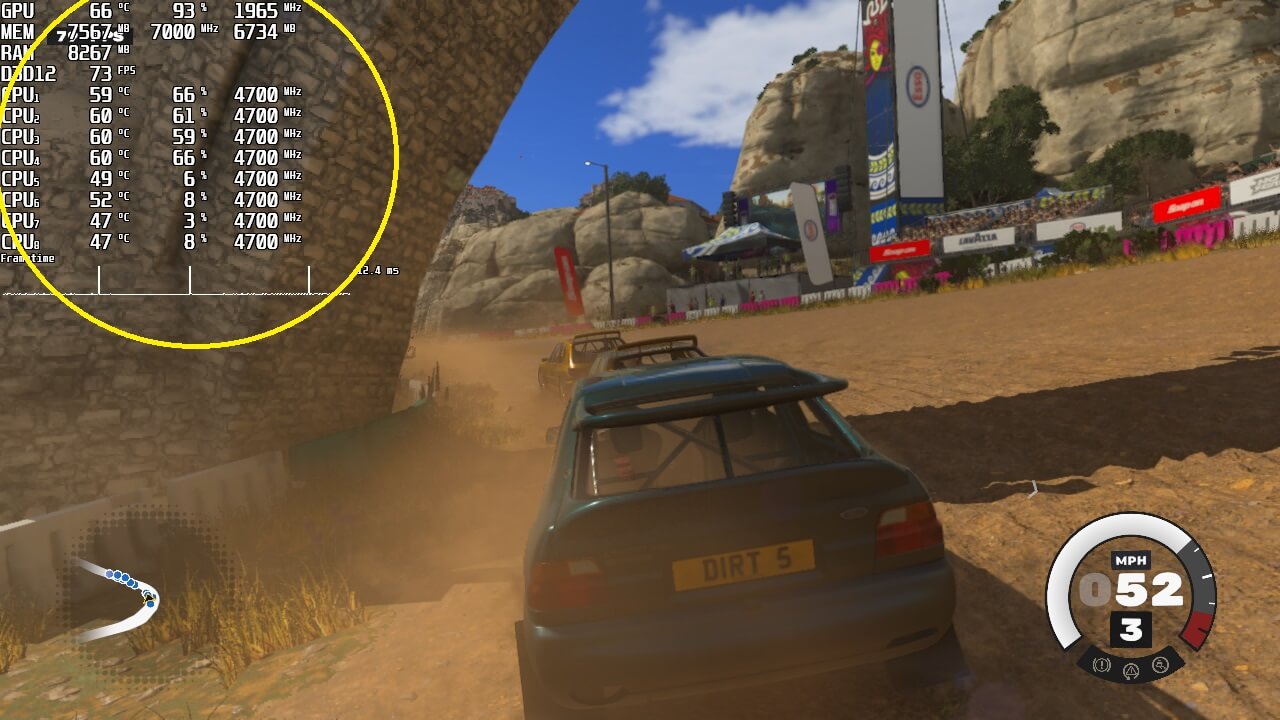 Things got better on our hexa-core and eight-core CPUs, however, there is something really fishy going on with Dirt 5’s engine. At the start of each race, the game does not fully utilize the GPU, resulting in lower than anticipated performance. After 5-7 seconds, though, GPU usage steadily increases until it hits 98% usage. We don’t know why the game behaves this way, however, this behaviour occurred on both AMD’s and NVIDIA’s GPUs (even though we were not CPU-limited). This explains the huge difference between our minimum and average framerates. 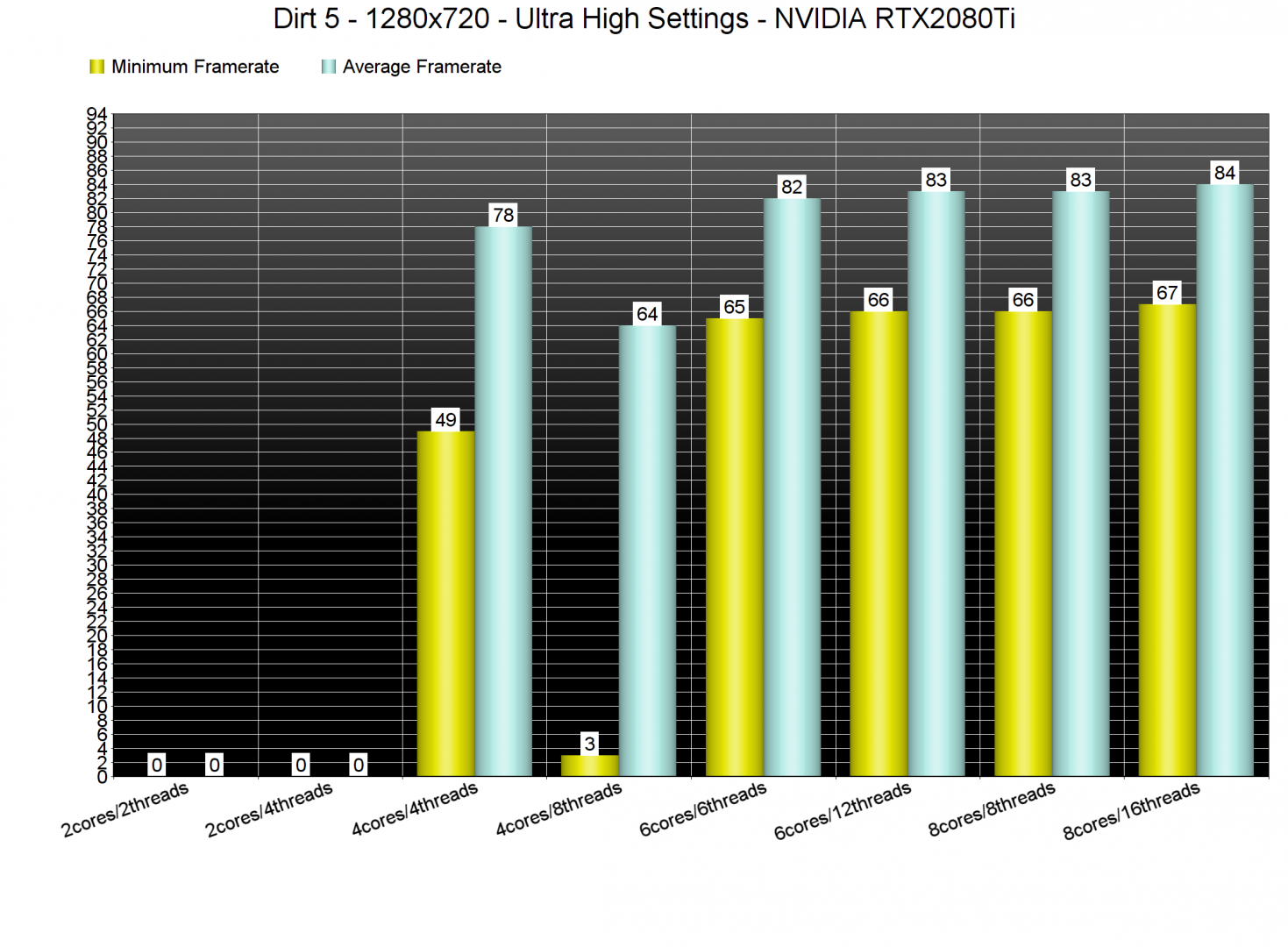 Due to this awkward behaviour, the game was unable to run with constant 60fps on our Intel i7 4930K CPU. In order to get a constant 60fps experience at 1920x1080 on that CPU, we had to lower our settings to High. Ironically, and even though Dirt 5 uses DX12, the game did not take full advantage of Intel i7 4930K’s six CPU cores and twelve threads. Sadly, this is a truly disappointing implementation of DX12. 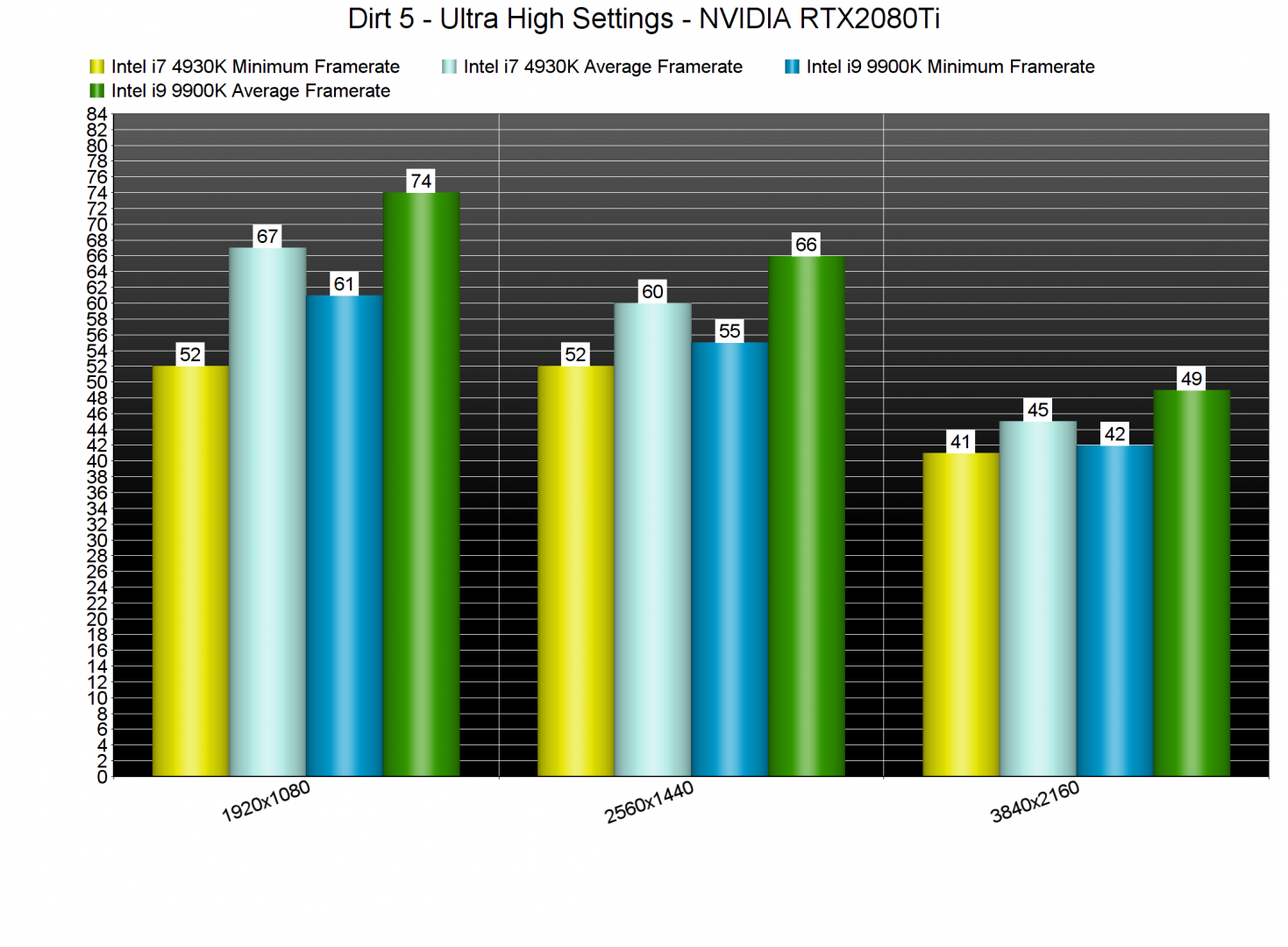 Even though Dirt 5 is an AMD-sponsored game, it had major issues on AMD’s GPUs. The game would constantly crash on the AMD Radeon RX580. On the other hand, and even though it did run on the AMD Radeon RX Vega 64, it had some awful square-ish/black artifacts. Ironically, the game performs fine and without any graphical glitches on both the NVIDIA RTX2080Ti and the GTX980Ti. Again, how on Earth this AMD-sponsored game has game-breaking issues on numerous AMD GPUs, yet performs fine on NVIDIA’s GPUs? Hilarious. 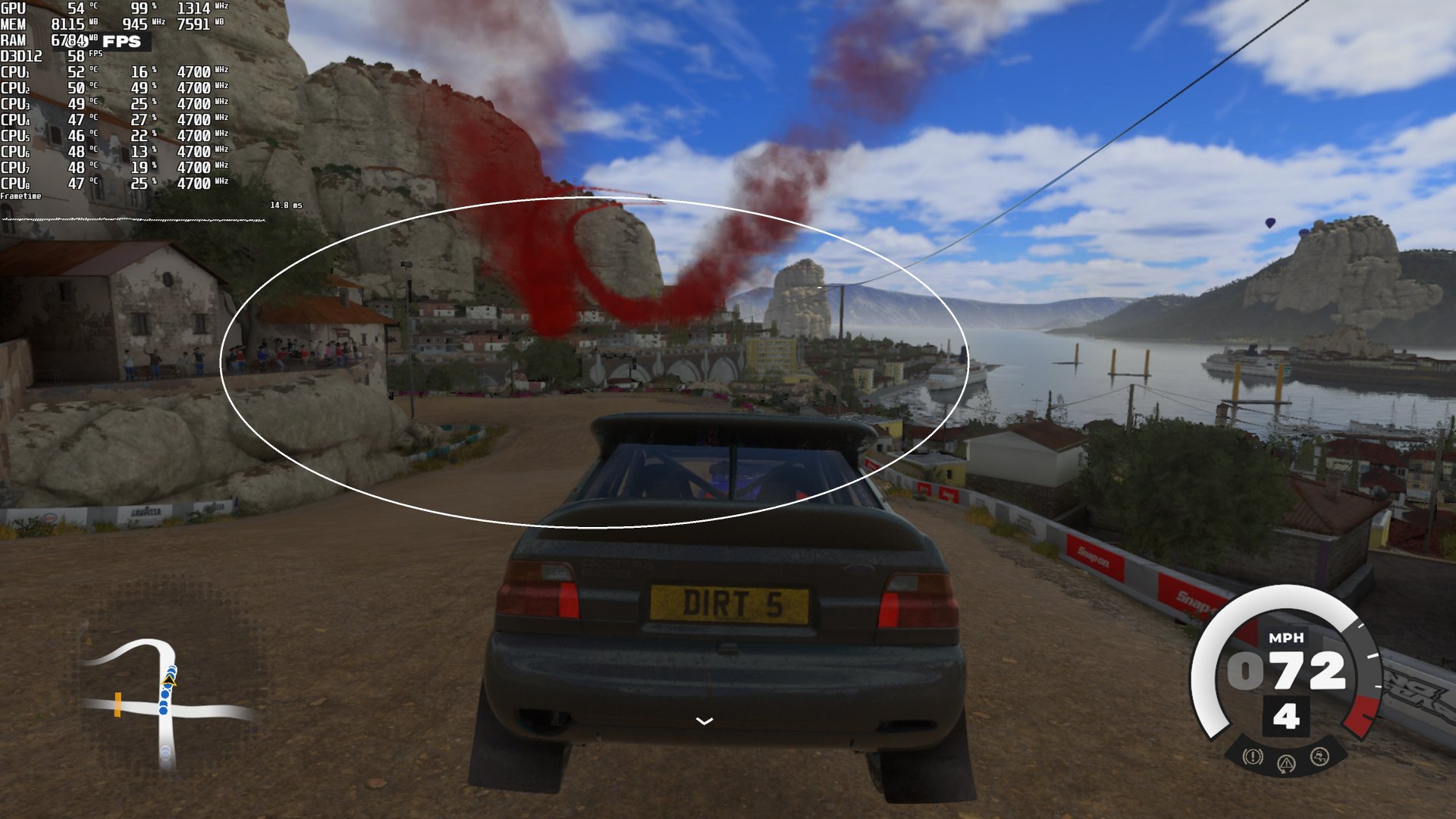 Performance-wise, the only GPU that was able to run the game with 60fps at 1920x1080 was the RTX2080Ti. The NVIDIA GTX980Ti, despite having 6GB of VRAM, was hitting VRAM limitations even at 1080p. So yeah, don’t expect to be playing this game on Ultra settings with GPUs that have less than 8GB of VRAM. As for 4K/Ultra High, our RTX2080Ti was nowhere close to a 60fps experience. 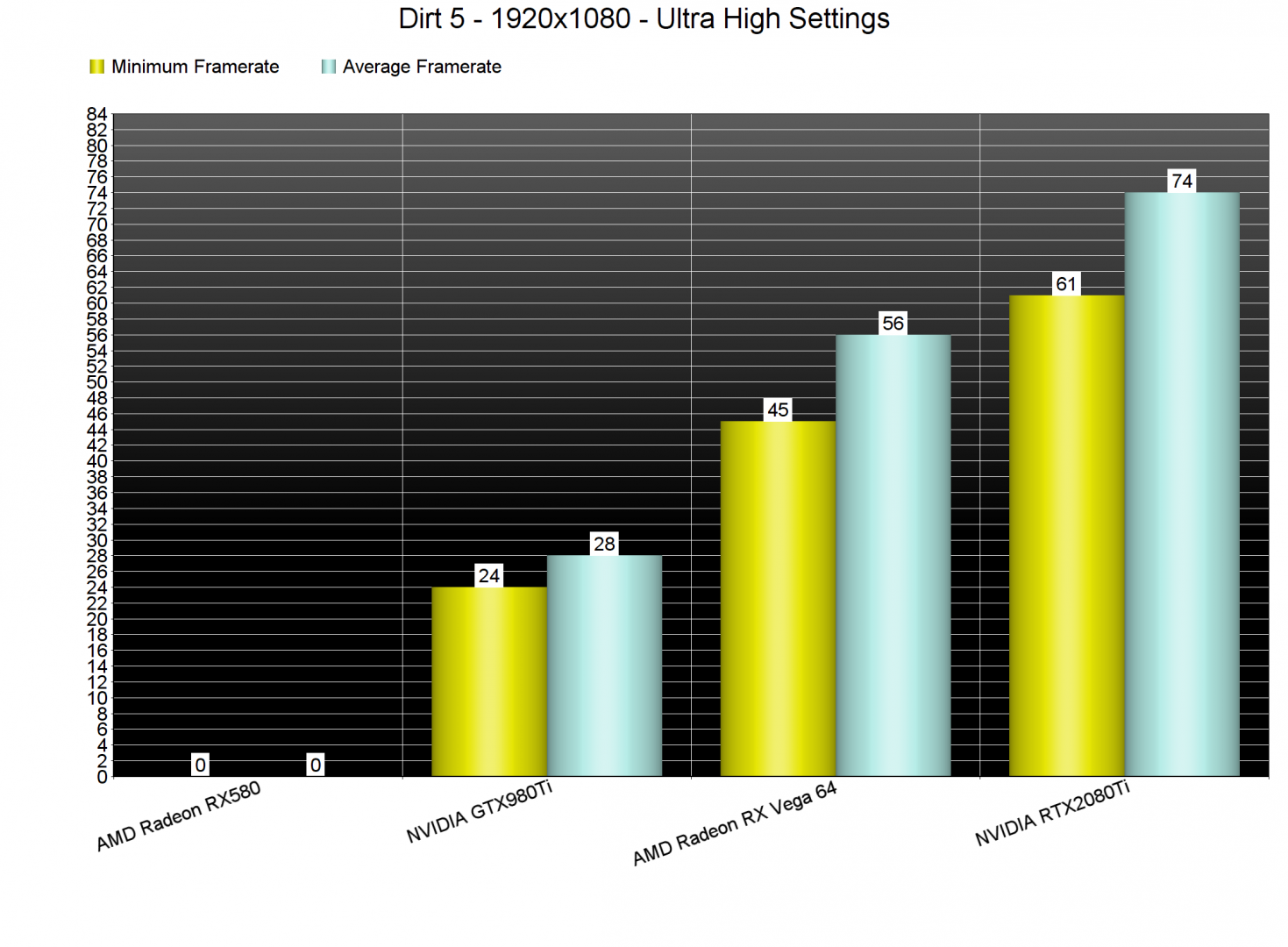 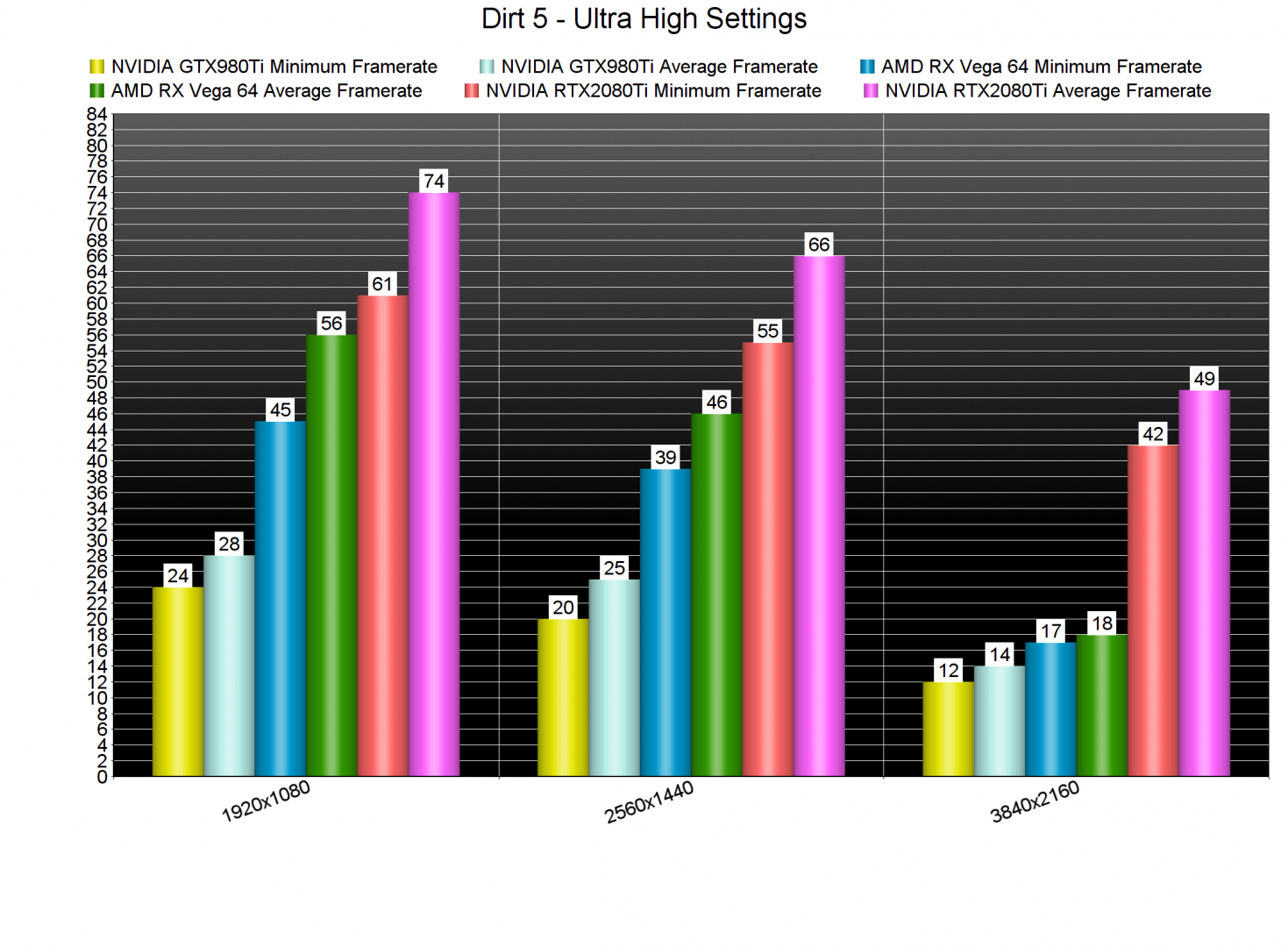 Since the game appears to be really heavy on the GPU, we’ve decided to test its different graphics presets in 4K. The good news here is that the RTX2080Ti was able to push an average of 65fps in 4K/High. There were some initial drops to 55fps, but those drops are due to the game being unable to fully utilize the GPU at the start of a race. Furthermore, the game’s Medium/Low settings scale incredibly and provide noticeable performance increases. It’s also worth noting that even on Medium settings, the game looks good. 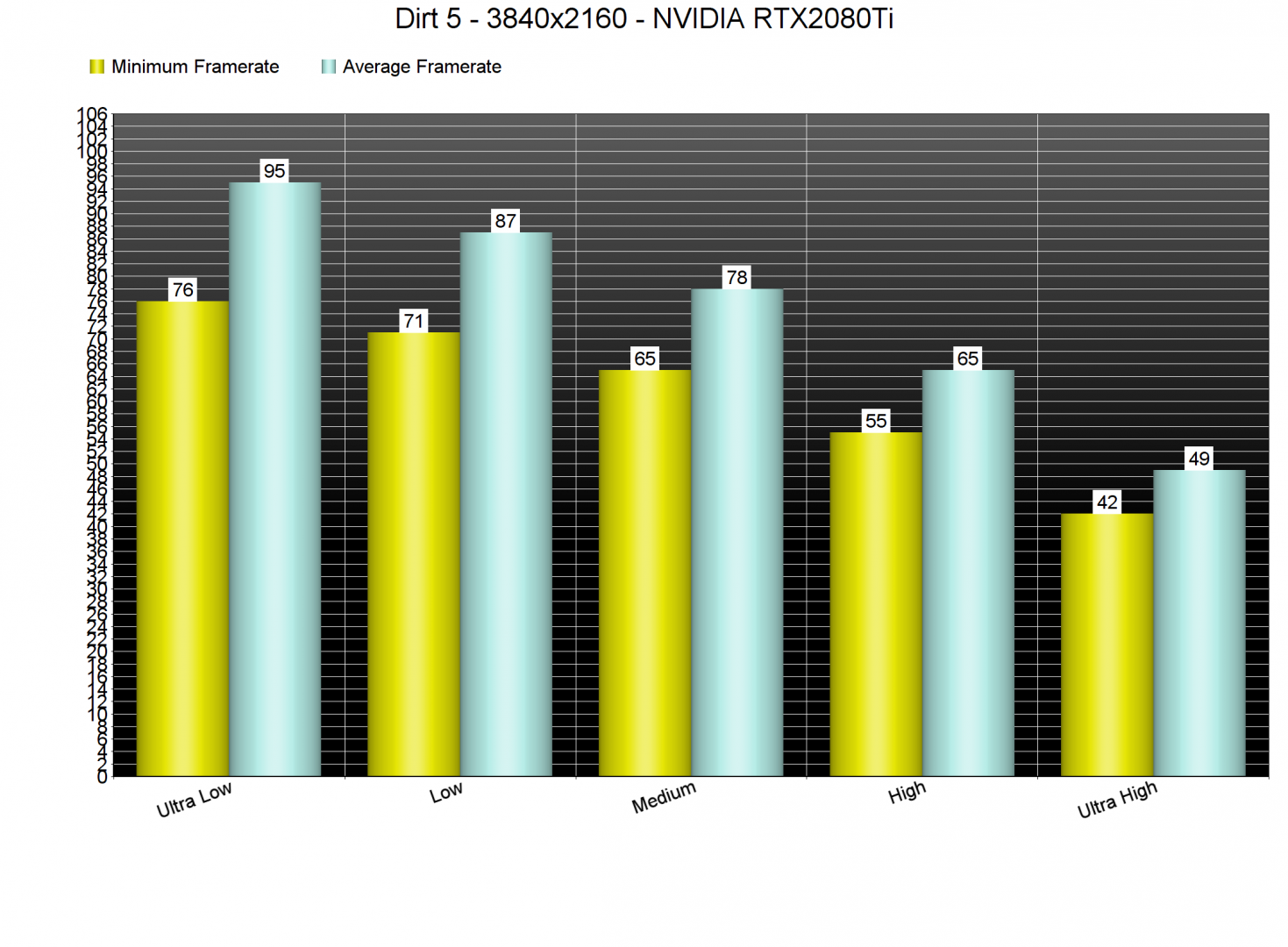 Graphics-wise, though Dirt 5 is not pushing mind-blowing visuals, it does look great. The game comes with some great ground tessellation effects, and its dynamic weather system is amazing. However, the car models are not that much better from what we’ve seen in other current-gen racing games. The lighting system also appears to be what most of us we’d expect from a current-gen game. Dirt 5 comes with a damage system, though it’s not as extensive as we’d hoped. On the other hand, its particles effects are great, and there are some really cool small details (like your car getting dirtier while racing). We also noticed numerous pop-ins of shadows and vegetation, even on High settings.

In conclusion, Dirt 5 suffers from major optimization issues on the PC. Despite the fact that it uses DX12, it cannot take full advantage of multi-core CPUs. The game also performs horribly on Codemasters’ minimum listed CPU. Not only that, but the game also has major issues on AMD’s GPUs. We also experienced numerous crashes on both AMD’s and NVIDIA’s hardware. And lastly, the game’s Ultra High settings do not appear to justify their enormous GPU requirements!