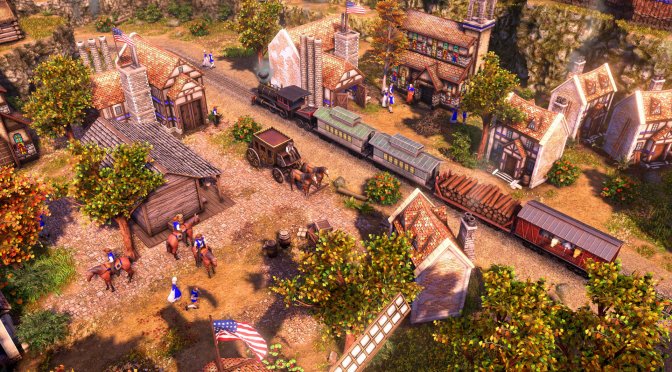 Microsoft has just released Age of Empires 3 Definitive Edition on the PC. At first, we weren’t planning to publish a PC Performance Analysis for this title. However, and after benchmarking the game, it became obvious that this remaster is more demanding than we initially thought. Thus, we’ve decided to benchmark it on both AMD’s and NVIDIA’s hardware, and share our findings. 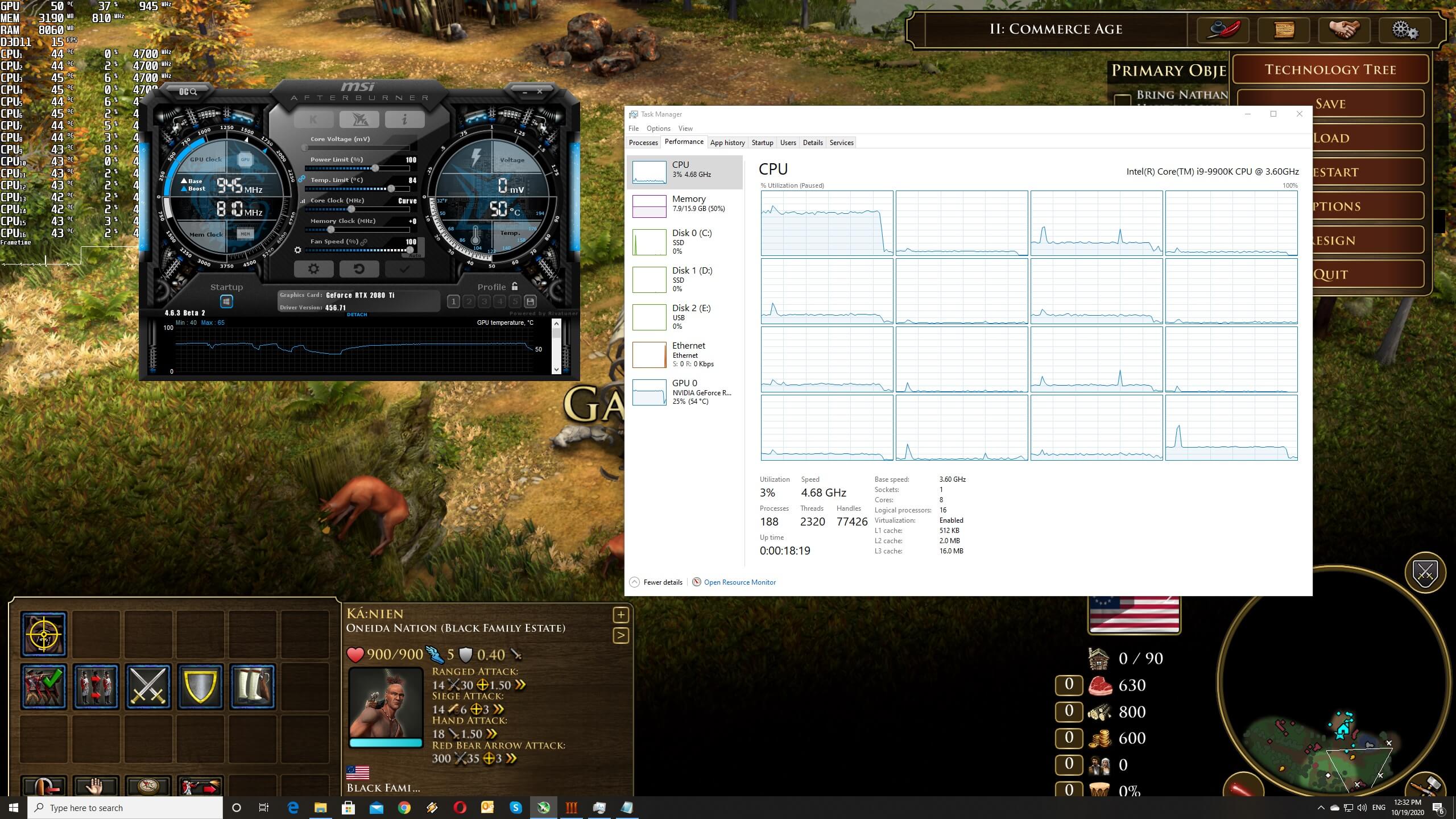 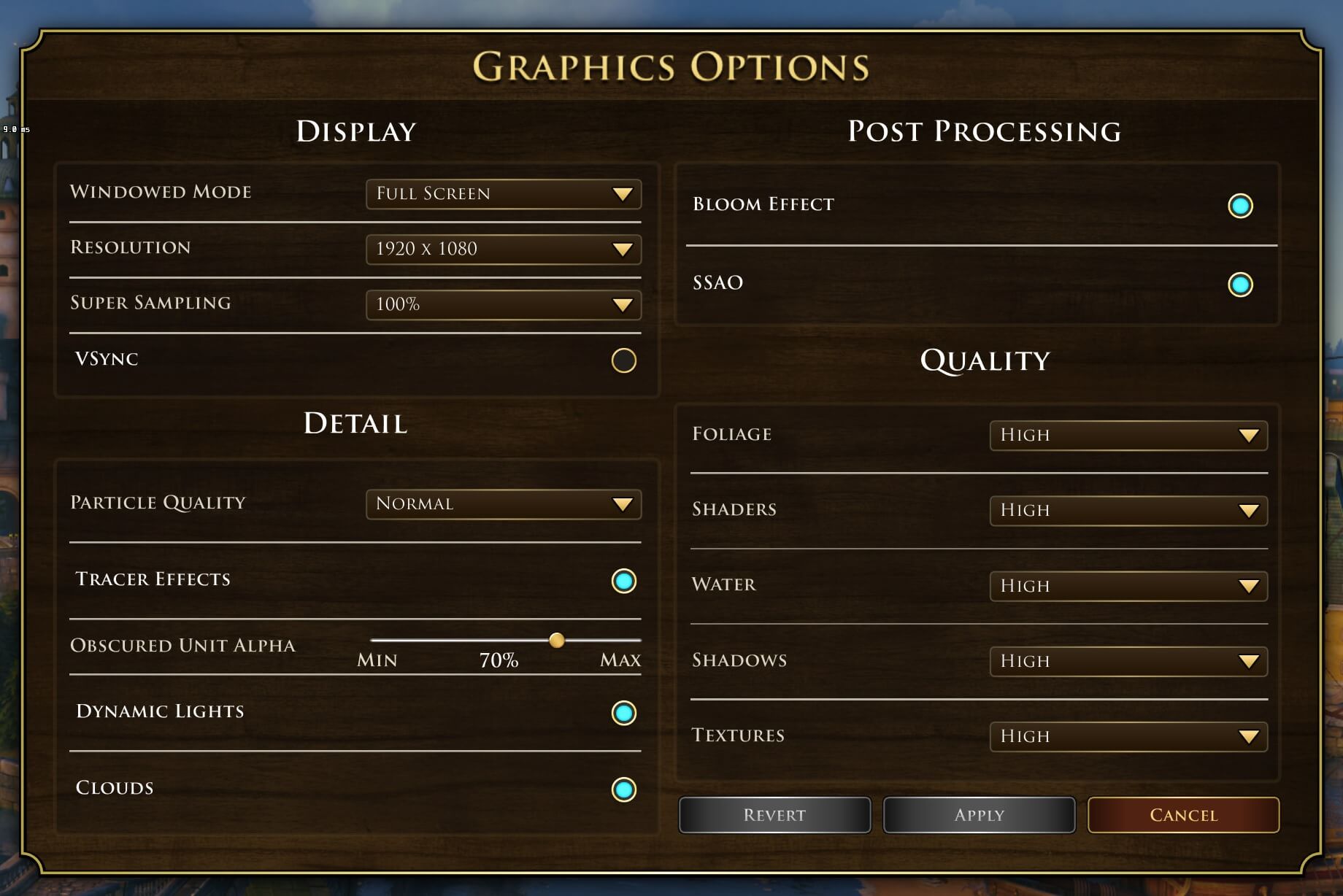 Age of Empires 3 Definitive Edition comes with a few graphics settings to tweak. PC gamers can adjust the quality of Particles, Foliage, Shaders, Water, Shadows and Textures. There are also options for Tracer Effects, Dynamic Lights, Clouds, Bloom and SSAO.

Age of Empires 3 Definitive Edition does not require a high-end CPU. From what we can see, the game uses the DX11 API and does not take advantage of more than two CPU cores/threads. In order to find out how the game scales on multiple CPU threads, we simulated a dual-core, a quad-core and a hexa-core CPU. And, we are happy to report, that even our simulated dual-core system was able to push a constant 100fps experience at 1080p/High. 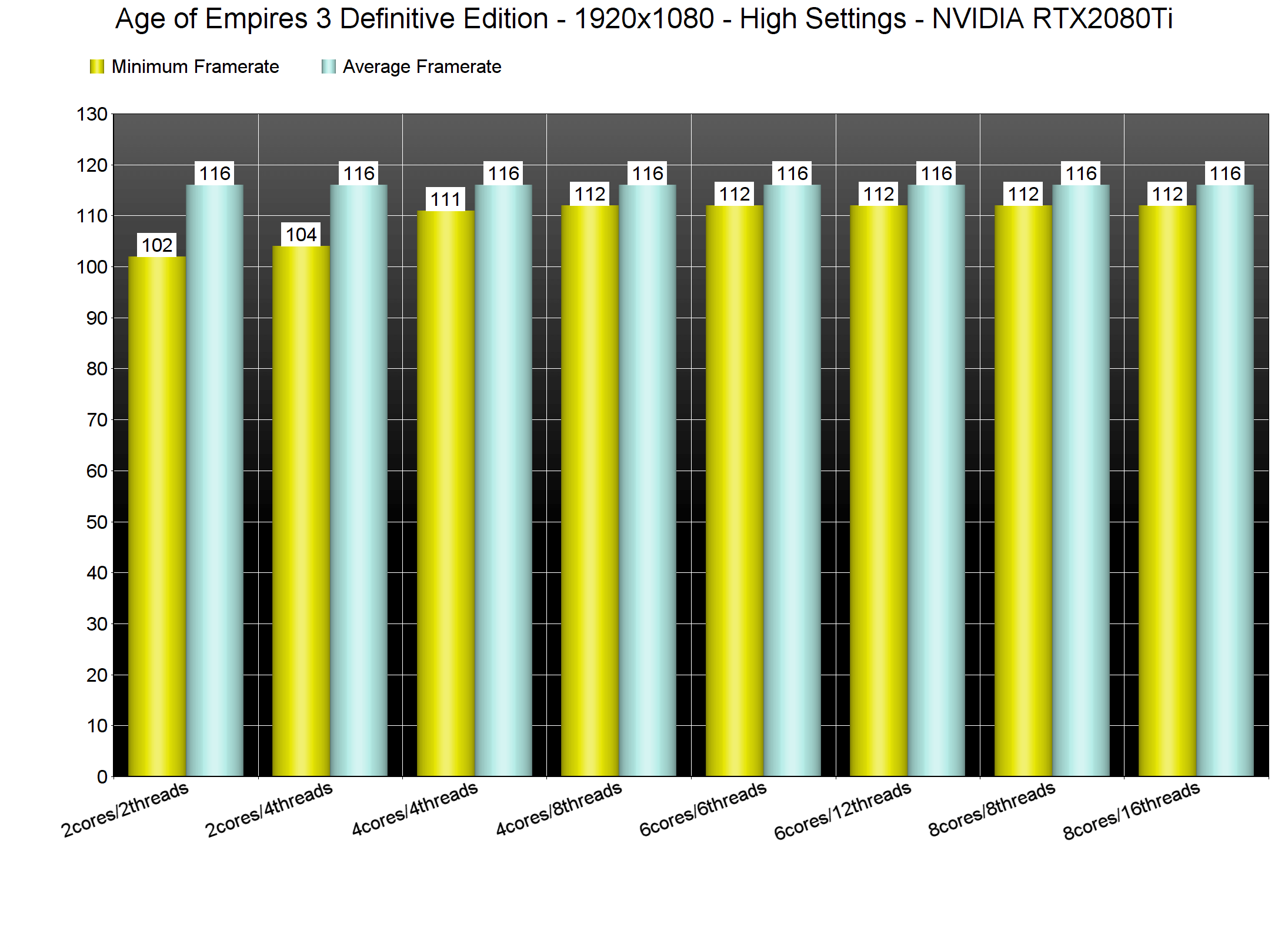 The game can also run smoothly on older generation CPUs. Our Intel i7 4930K was able to push a constant 80fps experience at 1080p/High settings. Yes, there was a huge 30fps difference between these two CPUs. However, that old CPU was still able to provide a smooth gaming experience. 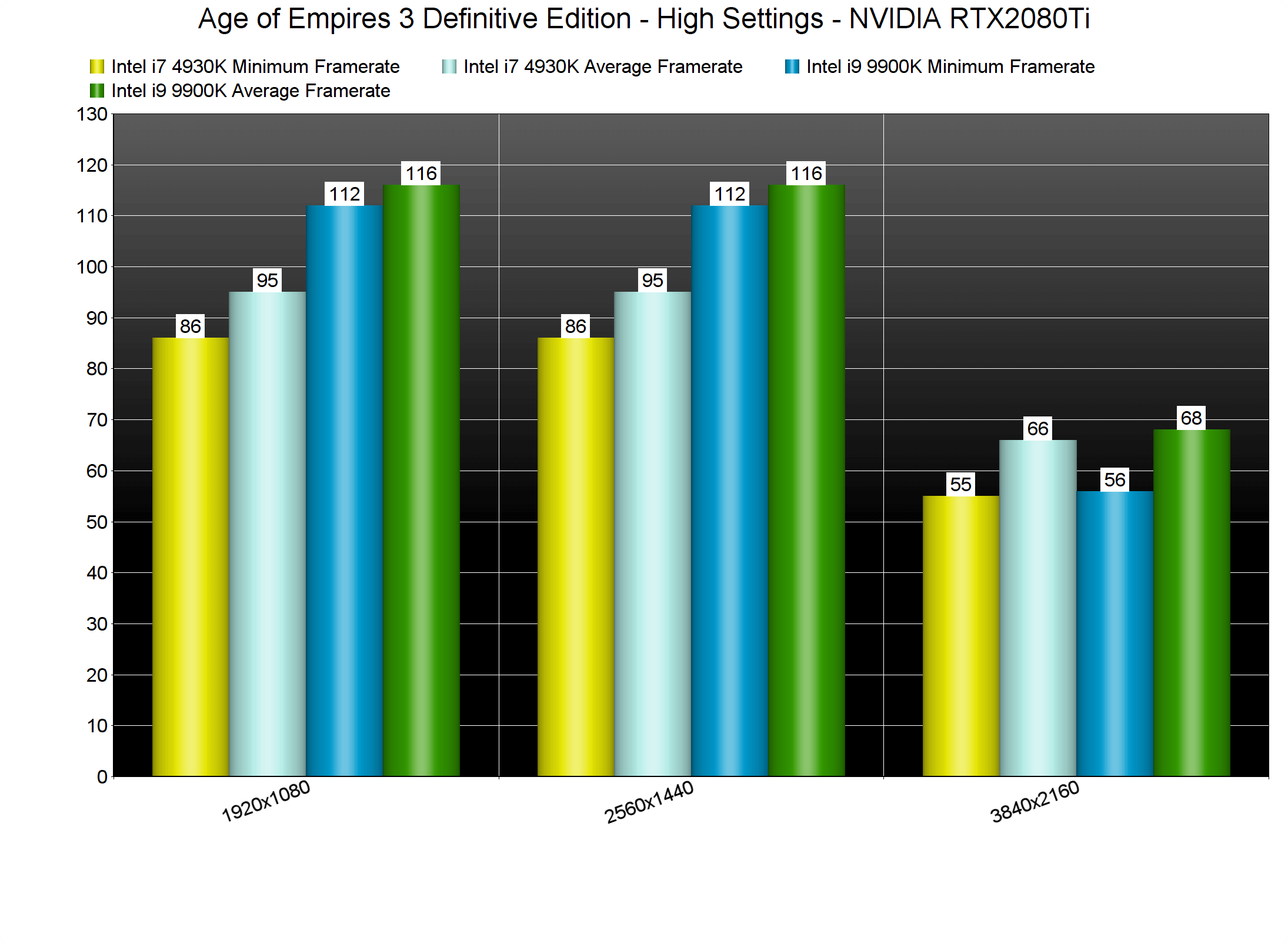 Now while Age of Empires 3 Definitive Edition does not require a high-end CPU, it does require a modern GPU. At 1080p/High settings, our AMD Radeon RX580 was unable to offer a 60fps experience. Furthermore, this title did not perform that great on the AMD Radeon RX Vega 64. That particular GPU was noticeably slower than the NVIDIA GeForce GTX980Ti at 1080p. We don’t know whether this is due to a driver overhead caused by the DirectX 11 API or not. What we do know is that the AMD Radeon RX Vega 64 underperforms in this title. 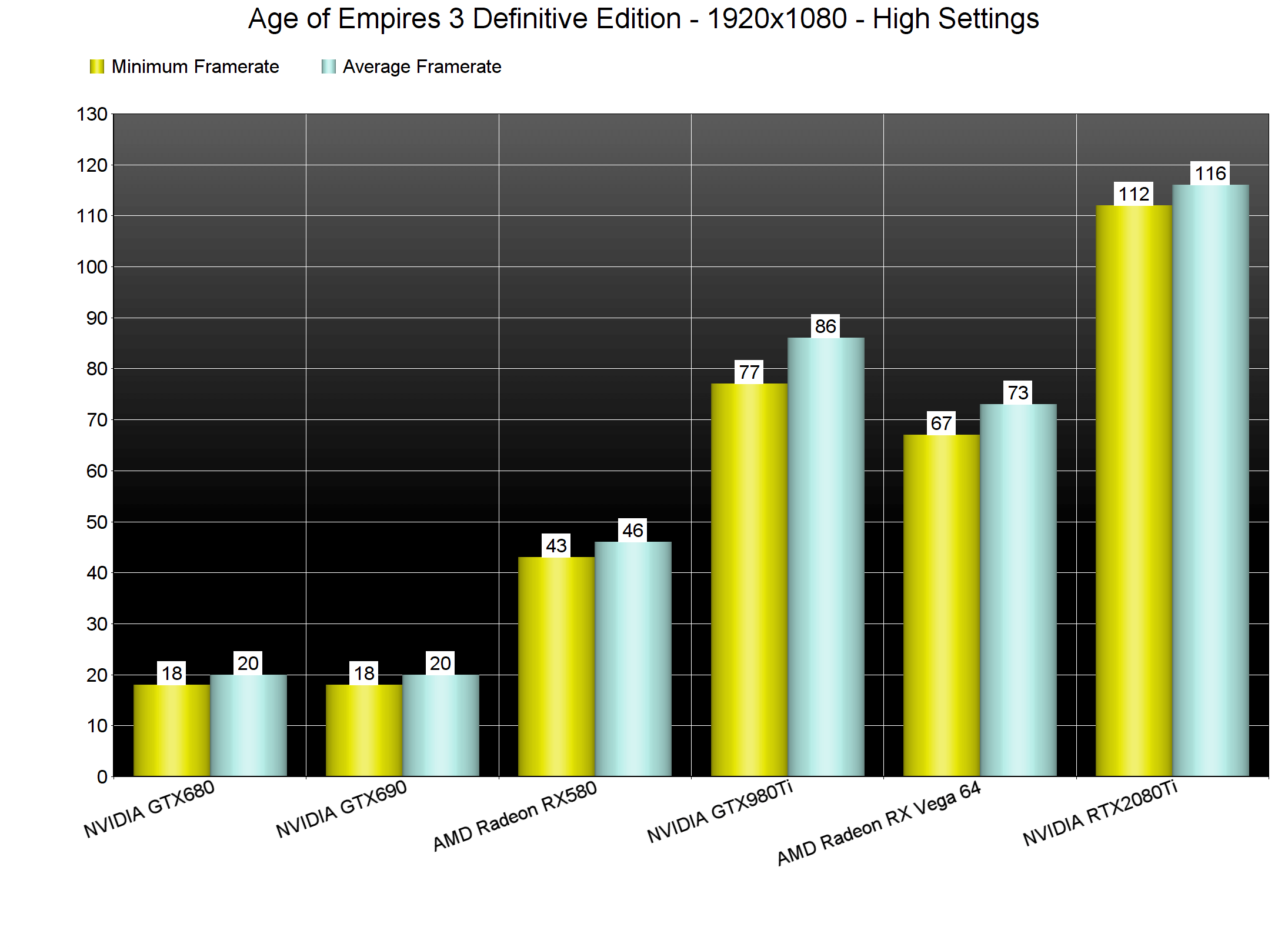 At 1440p, the only GPU that was able to offer a smooth gaming experience was the NVIDIA GeForce RTX2080Ti. It’s also interesting noting that the gap between the GTX980Ti and the Vega 64 has decreased at 1440p. As for 4K, our RTX2080Ti pushed an average of 68fps and a minimum of 56fps. 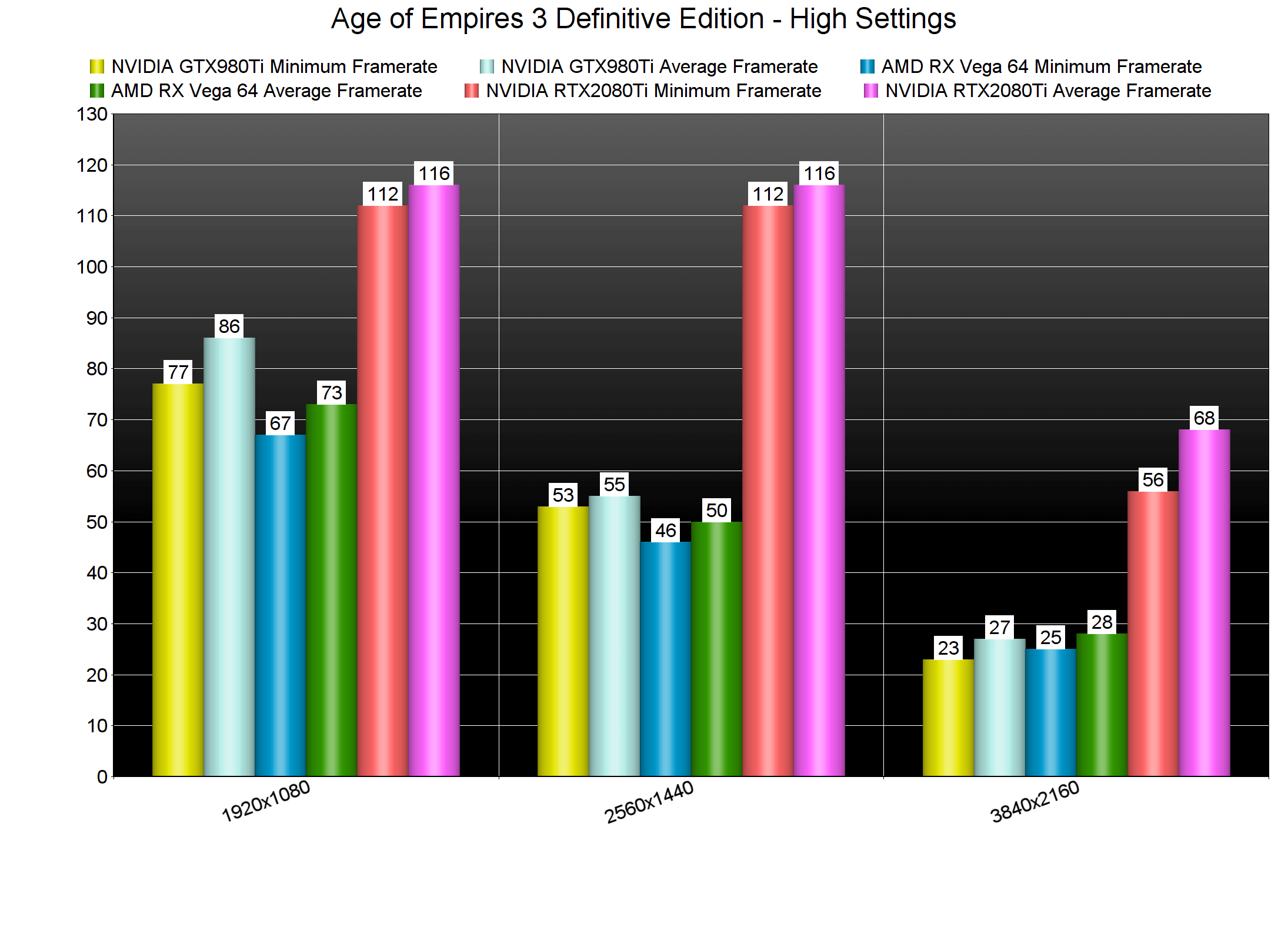 We also experienced a really weird bug on our 60hz monitor. For some unknown reason, the game was constantly running below our monitor’s refresh rate, even when V-Sync was disabled. Due to this bug/issue, we experienced some stuttering and tearing issues (we could resolve the tearing issues by enabling V-Sync). So yeah, keep that in mind in case you own a 60hz monitor.

Graphics-wise, Age of Empires 3 Definitive Edition looks better than its original version. The game packs better shading effects, better shadows, and more detailed environments. It also comes with higher quality textures, and screen-space reflections (though these reflections can introduce annoying artifacts). Thankfully, the teams behind this remaster were able to capture the atmosphere and style of the original game. All units have been improved, featuring a higher polygon count and better textures.

Now while this remaster looks better than its original version, it does not really justify its high GPU requirements. I really can’t see why an RTX2080Ti has drops to 56fps in 4K on a game that looks like this. Not only that, but – as we’ve already said – the game does not currently run great on some of AMD’s hardware. The game also runs with 5-6fps lower than your monitor’s refresh rate and introduces stuttering issues. These issues can be easily noticed on 60hz monitors.

In conclusion, we believe that Age of Empires 3 Definitive Edition could benefit from some optimization/performance patches, as well as some new drivers from AMD.