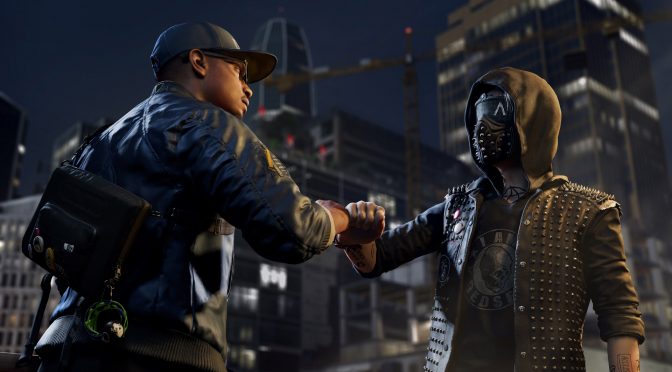 Ubisoft has revealed the changes that are coming Watch_Dogs 2 via a new patch. This patch will update the game’s version to 1.08, will introduce some new features, and will be made available later this week.

This new update for Watch_Dogs 2 will let players replay any mission that is part of a Main Operation, choose a difficulty level, bring new enemy weapons, as well as a new Hacker Level.

Furthermore, this patch will feature many tweaks to Hacking Invasions, will bring improvements to Leaderboards, Shooting Mechanics, and Online Co-Op, will improve performance and stability, and will pack various PC-specific fixes.

Those interested can read the full changes that are coming to Watch_Dogs 2 with this patch here. Below you can find the major bug and PC-specific fixes that will be featured in it.

• Leaderboard rewards: If you earned a leaderboard reward in Season 1, it will be delivered to your inventory in this patch.
• “PULL OVER NOW!”: The loudspeaker policewoman will repeat this command less frequently.
• Wall Geometry Exploits: Players can no longer use motorcycles to pass through walls, and we’ve fixed other similar wall exploits.
• Broken missions/halted progression: Fixed progression-breaking issues for the following missions: Power to the Sheeple, Alcatraz Showdown, Infected Bytes, Just Making a Living, Get Back in the Game, Jailbird Blues, and Kicking it Old School. If you got stuck during any of these missions, you’ll be able to proceed now without starting over.
• Mass Sitara: Improved an issue where Sitara could be present multiple times in the Hacker Space during A Walk in the Park.
• Bounty: Fixed a rare issue where a Bounty could go on forever if the hunted player hid in Wrench’s garage.
• Bike Collision: Reduced the collision size on bikes so the player can drive closer to obstacles without bailing (time to find some trees and go nuts).
• Leaderboards: Fixed the description of the divisions in the leaderboards; percentage details were wrong.
• Invasion Rewards: Fixed an issue where you wouldn’t get the reward for neutralizing an invader without profiling them first.
• Co-Op: Fixed an issue where a player couldn’t get into a car while playing in coop.
• Improved performance and stability
• Minor graphical improvements
• Fixed multiple AI and traffic issues
• Several improvements on the GPS pathing
• Fixed multiple replication issues
• Fixed numerous minor audio and text issues in localized versions of the game
• Lots and lots of other minor bug fixes

• San Francisco Fog (aka “Karl”): Fixed a timer bug that was causing the iconic fog to appear less often than intended. On the days it appears, it will show up around 6PM and disappear around 2PM the next day. In a future update, we’ll adjust and randomize its appearance times, so you can enjoy it more often. If you are eager to see it, you can always make the time pass faster by taking a nap on the sofa in the HQ.
– The fog is not turned on by default (due to high demands on your PC) and must be activated in settings.
• Improved performance on Crossfire systems (AMD dual GPU systems)
• Fixed various minor issues with the UI and text.
• Fixed minor issues with the HUD in multi-monitor mode
• Fixed various cases of reflections corruption.