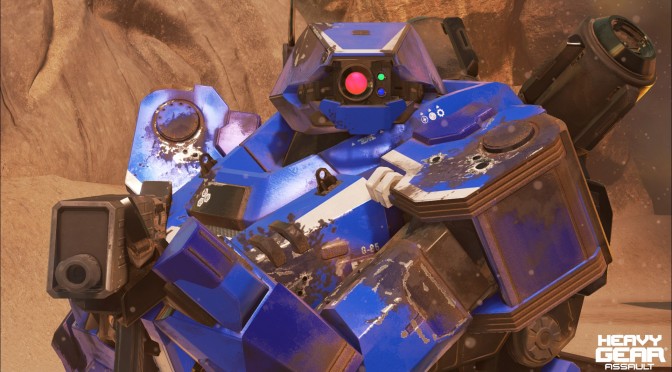 Stompy Bot Productions today announced that its upcoming PC mech title, Heavy Gear Assault, has entered the Early Access phase of development. The action-packed mech game now features the Gear Bay module, which gives players unparalleled customization of their Gears (as the mechs are known in the game), alongside a wealth of optimizations and gameplay polish.

As the press release reads, there are over ten different stock Gears that players can choose from, and every piece from shoulders to torsos to lower legs are interchangeable, resulting in hundreds of thousands of different combinations. Layer dozens of weapons into the mix that range from lasers, sniper rifles, and automatics and you have a recipe for complete and utter madness. Each Gear can also be equipped with jetpacks, grenades and other features, but defense will also be important as each individual part can be damaged, so a leg or arm may be rendered useless quickly in battle.

“This new phase of development has really energized our team, and we’re eager to keep the momentum going full speed. Our early supporters have been dying to share their excitement with the world since it’s been underwraps, and we’re thrilled to see more players join in and provide vital feedback as we gear up for our full launch next year.”

Heavy Gear Assault is on track to officially release on PC, with full Linux support and compatibility between Windows and Linux users, in 2016.