Rumor alert everyone; Beyond Good & Evil 2 may appear in this year’s E3 event. A couple of days ago, Ubisoft posted – via its official FB page – an image with a pig. Of course this could hint to anything, but that pig is the same with the one of the Beyond Good & Evil franchise. The image that was shared has a quoted line from Beyond Good & Evil’s Pey’j that reads “Good thing I’m here… otherwise this whole place would fall apart.”

By now, it’s pretty obvious that Ubisoft is bringing back this franchise, otherwise this comment and that game would not be used for this year’s E3 event. 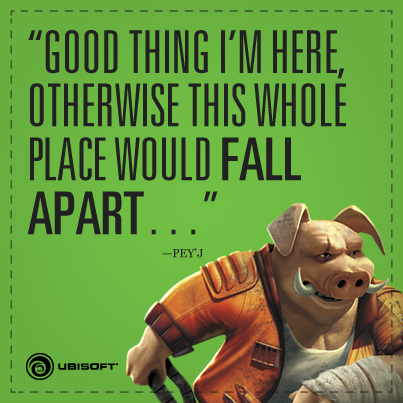 Let’s also not forget that Beyond Good & Evil 2 appeared on the E3 insider page (though that page featured some really odd entries, as the PC version of GTA V) and that according to LiveWiiU.fr, the game has been back in production – and under development – since April.

At this point, we’ll simply have to wait and see. Our guess is that BG&E2 will be re-announced/revealed during Ubisoft’s conference, so stay tuned for more everyone.

Kudos to our reader ‘Vila Da Silva’ for informing us!