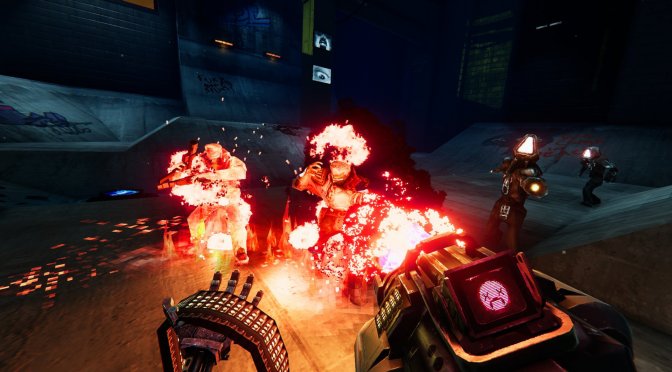 Apogee has just announced a new FPS that is heavily inspired by Doom, Duke Nukem and Quake, and comes with cyberpunk visuals, called Turbo Overkill. Turbo Overkill promises to be one of the most savage first-person shooters, and below you can find its announcement trailer.

In this game, you play as half-metal, half-human, half-crazy Johnny Turbo. Johnny Turbo has been augmented with hidden arm rockets and a chainsaw that extends from his lower leg allowing him to kick-slice enemies wide open.

In this Blade Runner-meets-DOOM hellscape, Johnny returns to his hometown of Paradise and finds its entire population possessed by a rogue AI, Syn, and its army of augmented minions. And, naturally, Johnny will take on the impossible job of destroying this AI.

Turbo Overkill promises to take over-the-top to never-before-reached heights. The game will feature Activate Hero Time which is a new form of slow-motion with a twist. Additionally, it will have wall-running and dashing mechanics. Players can slide on their chainsaw leg, eviscerating foes and opening up bosses for critical damage. Not only that, but Turbo Overkill will have flying cars.

Turbo Overkill also promises to have a wide range of weapons. Players can blast away with the Twin Magnums, the Boomer Shotgun and its attached grenade launcher, or the Telefragger sniper rifle.

Lastly, the game will have game-changing collectibles that will unlock punishing modifiers.

There is currently no ETA on when the Turbo Overkill will come out. As always, though, we’ll be sure to keep you posted.