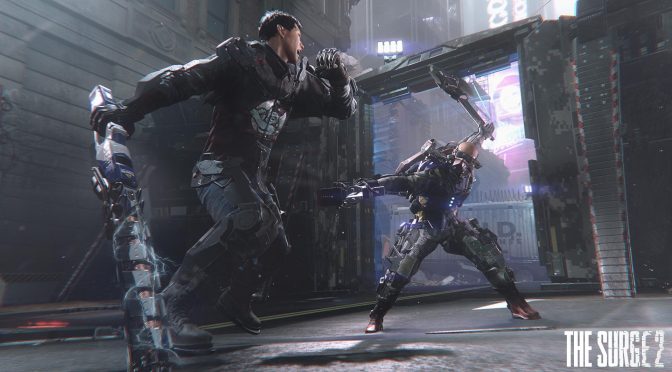 It appears that Microsoft may have just leaked the release date for The Surge 2. According to the Microsoft Store pre-order listing, The Surge 2 is currently planned for a September 24th, 2019, release. September 24th is a Thursday, so this appears to be a legit date (and not a placeholder).

The listing also provides some additional story details about the game. Players will explore the sprawling, devastated Jericho City, fight ferocious threats in brutal, unforgiving combat, slashing and tearing the limbs off their opponents to steal valuable equipment.

“On the way to Jericho City, your plane is shot down by a mysterious storm and crash-lands in the outskirts. Soldiers enforce Martial Law, robots are on a rampage, and a dark, expanding nanostorm looms over the cityscape.

In a bid to survive, explore the sprawling, devastated Jericho City. Fight ferocious threats in brutal, unforgiving combat, slashing and tearing the limbs off your opponents to steal valuable equipment that will make you stronger – strong enough to face the most fearsome, imposing foes lurking in the city. With an expanded arsenal of weapons, armors, abilities, implants, and drones to build your character, and a bigger, more varied and more ambitious world, The Surge 2 challenges you to survive and unravel its hidden secrets.”

The Surge 2 will have double the number of weapon classes (than its predecessor) and the weapon skill system will be enhanced and upgraded. The game also features an upgraded drone, will have more bosses and a large variety of enemies, the AI will be improved/enhanced, and some enemies will have guns.

The combo mechanics have also been completely rewritten. Furthermore, lots of fighting and combo mechanics have been upgraded and there is a lot more flexibility in cooldowns now. Also, levels will be more interconnected and traversing the world will be possible in many more layers now.