Electronic Arts today announced that The Sims 3 Supernatural Expansion Pack is now available at retailers nationwide and for digital download on PC and Mac. In The Sims 3 Supernatural, players will experience the madness of the werewolves’ full moon, the menace of vampires, the magic of witches, and the mischief of fairies as they explore the new world of Moonlight Falls. Intoxicating magic and spellbinding surprises await players as they fully embody a supernatural life, playing as new types of Sims with mysterious powers and enchanting traits.

“This expansion pack adds a new, magical dimension to The Sims experience, opening up a world of storytelling possibilities. We’re excited to put creative tools in the hands of our players, giving them the ability to tell contemporary stories inspired by this supernatural theme.”

A cast of supernatural characters introduce fun new gameplay options to the world of The Sims 3. Players can live out supernatural lives as werewolves, fairies, witches and vampires, all of which are completely customizable in the Create A Sim tool. Witches can challenge one another in spellcasting duels or show off their high-flying tricks in the magic broom arena. Werewolves can hunt for collectibles and change at will between their human and wolf forms. Fairies can play pranks and cast beneficial auras, while vampires stalk the night and use their seductive powers to convince other Sims to join their undead ranks.

Aside from a cast of new supernatural Sims, The Sims 3 Supernatural offers many additional gameplay features available to all Sims in the game, supernatural or not. Any player can choose to build their Sim’s skill in alchemy, mixing a variety of potent elixirs that range from love potions to vampiric sunscreen and even zombification brews. Sims will explore the mysterious world of Moonlight Falls as they uncover hidden secrets and collect rare ingredients, allowing them to ultimately create more powerful elixirs. Sims who truly hone this craft can reach the status of master alchemist, and those looking to earn a few extra simoleons can visit the local alchemy shop to sell their concoctions.

In addition to werewolves, fairies, witches and vampires, players can expect to see many more ghosts amidst the supernaturals in their town. For the first time in The Sims 3, players can customize ghost Sims by selecting their cause of death, with options including ‘death by drowning’, ‘death by fire’ and ‘death by meteor.’ The Sims 3 Supernatural also adds a completely new death type, ‘death by jelly beans,’ for those Sims prone to over-indulgence.

Set in a foggy and secluded valley, the new world of Moonlight Falls adds a mysterious backdrop to The Sims 3 Supernatural and introduces new venues for Sims to explore. Supernatural Sims have their own lurk-worthy hangouts, including Varg’s Tavern, where werewolves congregate by the light of the full moon. Sims can also visit the traveler’s caravan to have their fortunes told, or choose the fortune-telling career path as either a legitimate medium or a bogus psychic.

Players can control the lunar cycle in their game for the first time in The Sims 3 Supernatural. With the rise of the full moon, players will notice strange happenings and changes in magical potency as both supernatural and ordinary Sims are affected. Players can customize the duration of the lunar cycle or choose to play with a continuous full moon for an especially peculiar and enchanted game experience. 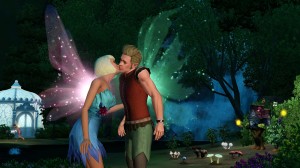 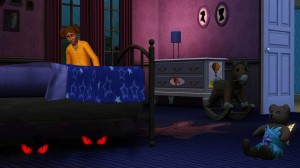 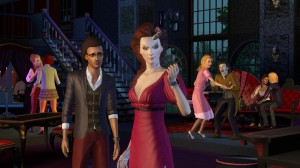 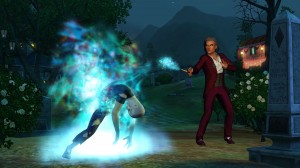