On March the 23rd Daedalic Entertainment and Deep Silver will release the new “The Dark Eye“-Adventure “Chains of Satinav”. However players can already listen to first parts of the atmospheric soundtrack on the official homepage. The music originates from the award-winning studio “Knights of Soundtrack“(Daniel Pharos and Dominik Morgenroth), which won the German Developer-Award for “A New Beginning“ in the category “Best Soundtrack“.

For the componists’ implementation Pharos und Morgenroth hired several guest-musicians of the medieval-scene: Sarah M. Newman, of the known medieval-band “Estampie“, plays the fiddle and lends her voice to the characteristic soundtrack. She is fortified by “Adas’“ harpist Angelika “Geka“ Voigt, the violinist Katy Lestrémau and other professional guest-musicians.

The soundtrack on CD will be included in the normal-, as well as in the collector’s-edition.

“It was wonderful to accompany the hero Geron on his journey. The fairytale music we created is among our most emotive soundtracks, full of soft, beautiful moments. The game has a particular mood and to highlight these with music was a gorgeous experience!”

The Dark Eye: Chains of Satinav will be released on the 23rd of March 2012 exclusively for PC. 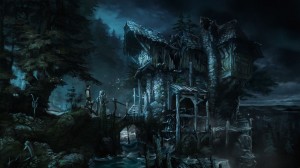 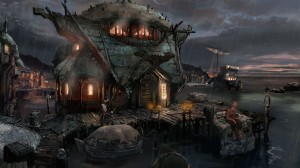