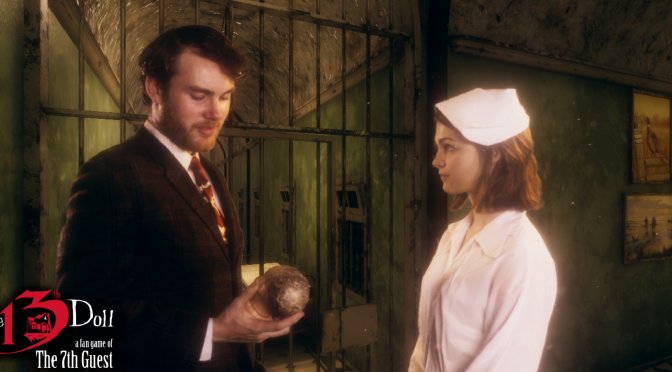 Attic Door Productions has announced that The 13th Doll: A Fan Game of The 7th Guest will release on October 31st. In order to celebrate this announcement, the team has released the game’s launch trailer that you can find below.

According to the press release, The 13th Doll is is a fully licensed game based on The 7th Guest series. Players will journey through 2 player paths, 25 unique and mind-bending puzzles, 5 endings, and get the return to the Stauf mansion; including the return of Robert Hirschboeck as Henry Stauf.

The 13th Doll: A Fan Game of The 7th Guest introduces two new locations along with its new puzzles. Players will assume the role of Tad, the original 7th guest or as newcomer Dr. Richmond. Players will have to work their way through Stauf’s history and legacy.

The game boasts a largely original score, with the use of some of the original The 7th Guest soundtrack elements in agreement with The Fat Man and Team Fat.  Moreover, it contains many hidden objects including the names of Kickstarter backers who made the game possible.

The 13th Doll: A Fan Game Of the 7th Guest Launch Trailer