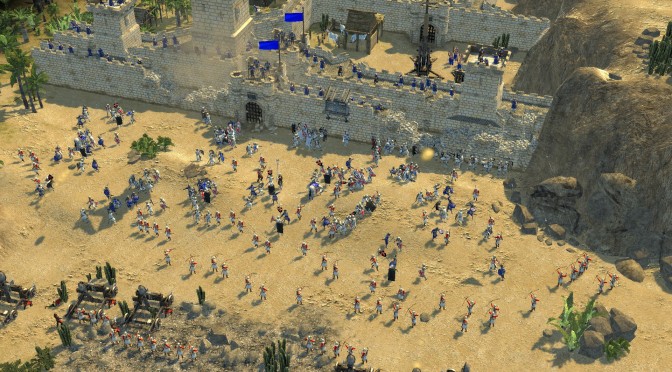 Firefly Studios has announced that the release date for Stronghold Crusader 2, their upcoming RTS ‘castle sim’ sequel, has been moved back from September 2nd to September 23rd.

“Over the past two years we have stuck to our mantra that the sequel to Stronghold Crusader will be ‘ready when it’s ready’ and, although we hate having to delay the release, this is the best course of action for everyone. Our closed beta gave us vital feedback from the Stronghold community and the Crusader 2 team feels that the game needs more polish before we release it. We love being in control of our own destiny, unlike with Stronghold 3, and not being forced to release a game too early.

In the bad old days, release dates were sacrosanct and publishers could force developers to ship even if we were not happy with the game. Now we’re in a much stronger position. Our partners, Mastertronic and Koch Media, have been very supportive and we have decided to release a better game on September 23rd.”

“As an independent developer self-publishing Stronghold Crusader 2, we are privileged to have fans who not only anticipate new releases but also show understanding when things like this happen. We are a small team working on Crusader 2 and to have a community of players who encourage us to take our time fosters a positive working environment and helps us to make better games.”

“We want to make the best ever 3D Stronghold game, something we’re completely happy with that lives up to the legacy of the first Crusader. By postponing the launch date we can invest time and money in return for extra polish, optimisation and bug fixes, creating a game we are proud to release.”

Stronghold Crusader 2 will be released on Steam and in stores on September 23rd 2014.