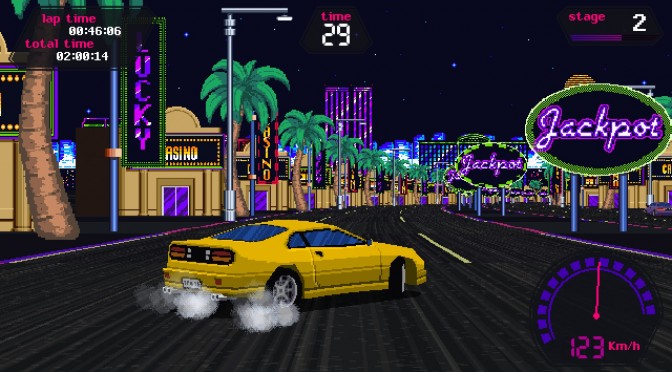 How many of our readers know me for my love of OutRun? SEGA Rally? SEGA in general? Or one of the best gaming sites of all time, UK Resistance? Consider yourselves informed, friends. Also remember to sign my petition, for more #SEGAPCPorts.

Anyways these dudes at Noctet Studio are making a really rad looking game with sprite scaling, it has heavy OutRun vibes and they have a demo already. That’s cool! Especially because it’s actually pretty good.

On top of the rad arcade driving (that’s another SEGA reference kids) in the style of OutRun they have plans for a visual-novel like story mode. The story mode will have special missions involving pursuits, escapes, one-on-one races and so on. Other plans call for a custom mode where you can adjust the experience to your preference.

They’re also looking at a more traditional racing mode, placed against other competitors, in contrast to the OutRun format of pitting the player against the clock. Slipstream does it all against a backdrop of original ’80s synthpop. Noctet is targeting release on Windows, OS X and Linux. Stretch goals include having the developers blow your hard earned money on superfluous celebrity cameos….. I kid, that’s not on the agenda.

Noctet is crowdfunding Slipstream with a goal of $6,000. At the time of writing they are sitting around $3,000 with 11 days to go so it seems iffy as to whether they’ll make it unfortunately, if it looks interesting to you and you want to contribute to the kickstarter, head on over.

Thanks to SEGABits for bringing it to my attention.