Now this is simply amazing. Remember THQ’s president Jason Rubin who believed that Saints Row: The Third was an embarassing game? Well, the same Jason Rubin has just revealed that Volition’s open-world title has managed to hit 5.5 million sales prior to THQ’s Humble Bundle. In other words, this embarassing game became a hit before anyone knew about it. Ironic, isn’t it?

“5.5 million people (pre Humble Bundle) can’t be wrong. Saints Row was the hit nobody realized was a hit!” 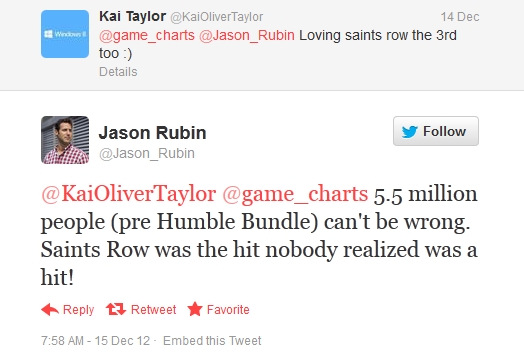 Kudos to NeoGAF for spotting it.

Back in June, Jason Rubin called Saints Row: The Third an embarassing game as Volition’s title featured scenes that were inappropriate for children. That was revealed in an interview with TheVerge and as you may have suspected, a lot of gamers got annoyed by Rubin’s comments. TheVerge edited the article later on, stating that Rubin was not embarassed for Saints Row: The Third.