Sacred Citadel offers a wealth of roleplaying features that help to spice up this action brawler. Players can battle with up to three characters out of a total of four, and all of them can be leveled up during the progress of the game and acquire new skills. Since Sacred Citadel is also a unique co-op experience, the different ways you can develop a character plays an important role for the whole group.

The four characters (consisting of the Khukuri Shaman, the Ancarian Ranger and the Safiri Warrior and a yet-to-be-revealed secret character) have their own skill sets that grant them stronger class attacks depending on their experience level, which come to life when used in conjunction with each other.

Throughout the game the characters can pick up a host of new equipment: weapons that can be used to beef up their attack values or armor to improve their defense stats. Players will be able to booster character’s stash with the treasures that he finds on his mission and spend it at one of the many merchants in town. Players will also have a number of tasty potions that can be used at will, to regain health or refill the power meter to unleash devastating special attacks.

Sacred Citadel, a side-scrolling action brawler, is a new standalone title that is set in the rich universe of Sacred. Sacred Citadel promises to reinvent the familiar arcade feel of classic brawlers while setting a new standard for the future of side scrolling hack and slash games. 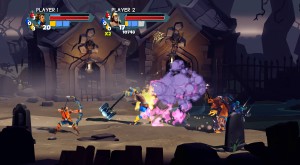 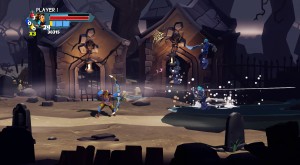 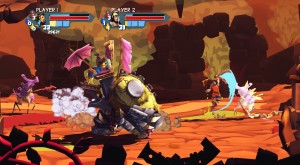