A well-known industry leaker Roland Quandt of WinFuture has recently shared some codenames of AMD’s Nashira Point GPU lineup on Twitter. Though, this is not the first time we are hearing this NAVI GPU codename, since  back in January, Nashira Point A0 entry appeared in a filing on USB-IF implementers forum website as well.

The Navi GPU entry was listed with a PDP/Power Delivery Profile of 27 Watts, which means that the USB Type-C connector is apparently supported by this SKU.

Coming back to the leaked codenames, Roland mentions three different variants of Nashira Point GPU, XTX, XT, and XL, and these are all consumer gaming graphics cards. We also have the GLXTA and GLXL codenames listed, but these are most likely AMD Radeon Pro variants, which are irrelevant for gamers.

The third variant Nashira Creek XM might be a mobile SKU. According to previous rumors, Nashira might also be a different codename for Navi 21 GPU silicon, or just an internal codename for an existing product released by AMD.

So we have the following variants listed: 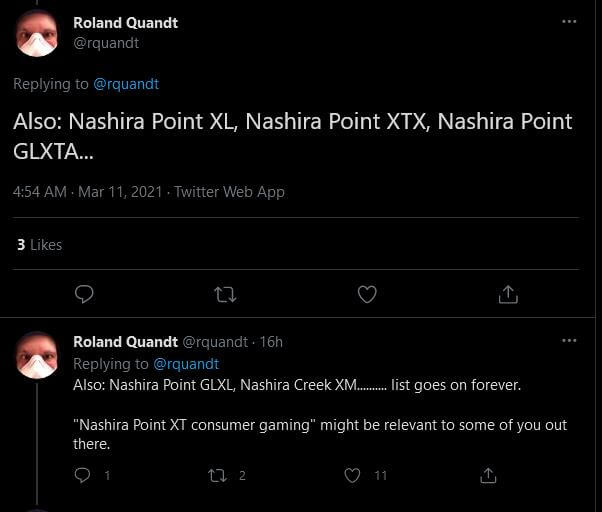 However, since Roland Quandt has not provided any link or source to backup these codenames, you should treat this as a rumor for now, until AMD officially confirms it.

Recently, a new Nashira Summit GPU codename also appeared in the Ashes of the Singularity benchmark website, coming via Leakbench.

According to a well-known leaker WJM47196, Nashira codename might actually refer to RDNA 3 based GPU with an MCM (multi-chip module) design. But this is just pure speculation at this point.

So basically, Nashira Summit, Nashira Point, and Nashira Creek might all refer to the same GPU or belong to the same family. But as of now, not much info can be gathered about these GPU variants.

It remains to be seen whether AMD is indeed prepping new NAVI gaming GPU variants, or the company might just “refresh” the current NAVI 21 GPU lineup, and release it as Nashira Point.

But without any proof or concrete evidence, it is too early to make a guess or come to any conclusion.