Air cooling has been the preferred choice by some of the PC enthusiasts, who don’t want to invest in an expensive “liquid cooling” solution for their PC components, be it GPU, CPU, Motherboard’s VRM, and even for the ATX cabinet in some cases.

Air cooling uses the ATX case’s air as the primary cooling medium. Cooler picks up the heat from a component and either airflow from case fans or natural convection (as heat rises) carries the hot air away. This is the most basic method of cooling, and costs the least. However, better air-cooling solutions can get bulky and heavy. Air coolers also require a lot more airflow, which translates to more noise, to achieve the same operating temperature as other cooling methods.

Air cooling is a standard method of system cooling used to dissipate heat. The object being cooled will have a flow of air moving over its surface. Most air cooling systems use a combination of fans and heat sinks, which exchange heat with air.

Now, the PC chassis and cooler maker company “RAIJINTEK” has announced its latest air cooling product, the MORPHEUS 8057. This is a massive, black-coated heatsink that’s compatible with AMD and NVIDIA’s higher-end graphics cards, such as the Radeon RX 5700 XT and the GeForce RTX 2080 Ti.

The Morpheus 8057 is compatible with the Radeon RX 5600, RX 5700 and their corresponding XT variants, and can also be used with the GeForce RTX 2060, RTX 2070, RTX 2080, RTX 2080 Ti as well as their corresponding SUPER variants, except for the Ti model. The support also extends to most “aftermarket” GPU models. Air coolers which might be fully compatible with the latest high-end GPUs, are kind of rare to find these days.

The Morpheus 8057 uses 12 copper heatpipes and 129 fins to help keep the attached graphics card cool, and can be combined with two 120mm fans to provide 360 watts of cooling capacity. The heatsink also comprises both copper (3 pcs) and aluminum (8 pcs) materials. So you can expect much better cooling from your graphics card while gaming, or when the GPU is under stress/load.

Thanks to the cooler’s “brobdingnagian” design, it can easily handle graphics cards up to 360 Watts of TDP. The entire heatsink is black coated and supports up to two standard 120mm fans (sold separately) with its provided fan mounting clips. The Raijintek Morpheus 8057 weighs at 515 grams (heatsink only) and comes bundled with copper and aluminium heat sinks for cooling the VRAM chips and VRM.

Cooling fans are not included though, so you’ll have to shell out some extra cash for them. Though, the company does provide eight fan clips, four for fans with a 25mm thickness and four for ones with a 13mm thickness. Raijintek has not revealed the pricing or availability for the Morpheus 805 heatsink air cooler. 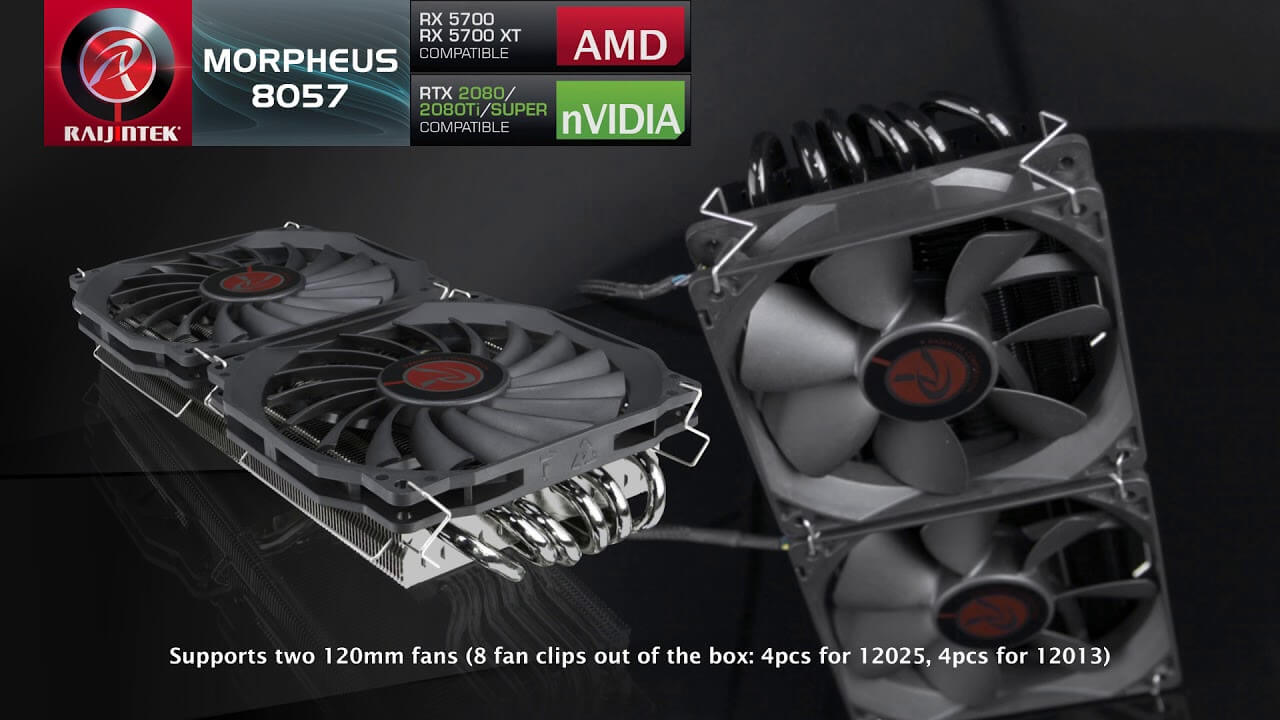