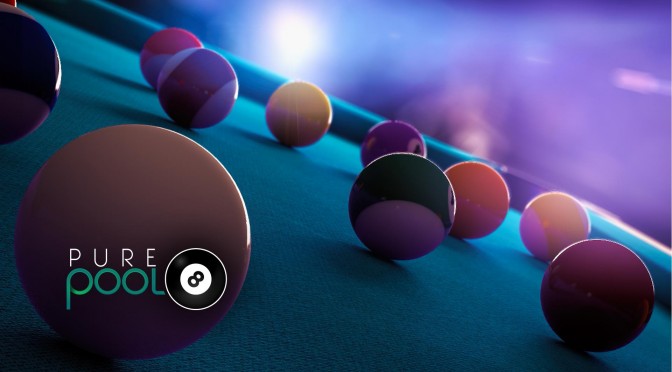 VooFoo Studios and Ripstone publishing announced today that the initial Pure Pool update is available to download now on PC via Steam. As the team noted, this update does not only include various improvements based on user feedback, but it also delivers fresh content.

The full list of improvements for both PS4 and PC is detailed below:

· New game mode – UK Black-Ball (UK 8-Ball) added to the roster.
· New ‘Master’ difficulty with aim aids turned off.
· 9-Ball free table – If the player has 9-Ball as their default game type the 9-Ball rack will be set up in free-play mode rather than the current forced 8-Ball.
· General AI improvements including:
o Improved ball in hand placement
o Ability to get out of snookers reduced
o Amateur difficulty slightly toned down
o Removed long AI wait times when ball near to a cushion
· Challenge notification icon – This displays an icon next to the players ‘Games’ option to inform them they have received a challenge from another player.
· Offline Player Challenge notification – System level. Invites appear in player’s notification even if they don’t have Pure Pool installed.
· Opponent player card accessible mid-game – Allows the player to see their opponent’s player card at any time during a match.
· Opponent able to view player’s table cam – Allows the player to see through the camera of the opponent when walking around the table.
· Player online feed only for friends – Removed player online notifications. Only displays friends who come online.
· Diamonds on the table rails to help players when shooting doubles.
· Yellow aim line made more distinct to reduce confusion between the two lines.
· Potting the black from the break now re-racks the balls.
· Player is now asked if they want to play against a DNA opponent or wants to continue searching for another online player.
· DNA now displayed next to the user name to clearly mark it out as an AI player.
· Server optimization.
· Opponents cue movement made visible in real time in online matches.
· Bug fix for players games not timing out and the game being awarded to the absent player.
· Bug fix to stop the players changing their difficulty mid-challenge and posting their score/time on the incorrect leaderboard.
· Fix for rankings and career mode trophies not being awarded (should retrospectively unlock any the player should have been awarded after one career match).
· Fix for losing spin and table control when pressing the triangle button during a shot on PS4.
· Fix for not being able to select language type on PC.
· Fix for inverted controls when ball-in-hand on PC.
· Fix for sound only coming out of headphones on PC.
· Vibration added for power shots.

“We’d like to take this opportunity to thank fans for their patience and concise feedback which has aided us in the development of the update. We urge fans to continue to feed back to us on their experiences with the game and hope that they enjoy the improvements and fresh content on offer in the update.”