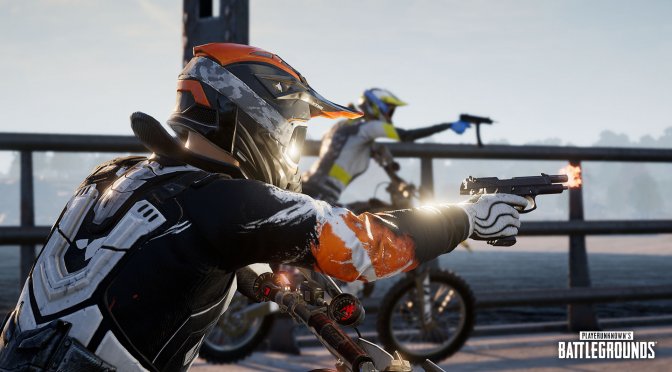 PUBG Corporation has released Update 9.2 for PUBG on the PC Test Server. This new update adds the Dirt Bike, brings some new features, and introduces some performance improvements.

As the press release reads, the new single-seater Dirt Bike is more than just a lite version of the Motorbike. It has its own independent clutch system to rev the engine, improved suspension for offroading, and some other fun features we know it won’t take you long to find, not to mention another fun addition coming in the future. The Dirt Bike spawns on all maps except for Karakin and will replace 50% of the existing bikes out there.

Furthermore, this update adds a Driver Shooting system. This new system allows you to fire sidearm weapons while driving and maintaining control over the vehicle (albeit with a slightly reduced response while reloading). This functionality works for most vehicles.

Additionally, this latest update adds a Lobby Chat System. Players will have access to text chat with their team before you enter the game and drop onto the Battlegrounds. Lobby chat features spam, ad, and abusive language filters, and also let you report anyone using it inappropriately.

Lastly, Update 9.2 improves CPU performance by cost optimization of characters outside the player POV. It also packs performance improvement by rendering optimization of atmospheric fog. Not only that, but it optimizes hitching that occurs when the plane is airborne in low specs/console environment. It also optimizes the excessive loading time when loading certain type of map in custom match sessions.

This patch is now live on the PC Test Server, and will be available to everyone on November 18th!