During Valve’s Steam Dev Days, Nvidia talked about OpenGL and how developers can take this open-source API in order to overcome the CPU limitations of the past and get performance similar to Mantle. Now before jumping around like little kids, know that this solution has not been adopted by anyone and we may never see this getting used to any triple-A games, as most games nowadays are using DirectX rather OpenGL.

As Nvidia claimed, developers can get significant CPU performance boosts using the ‘ARB_multi_draw_indirect’ command. Via this command, there can be a massive 5-30X increase in number of distinct objects per second, and the overall interaction of the API with the graphics driver can be decreased at around 75%. 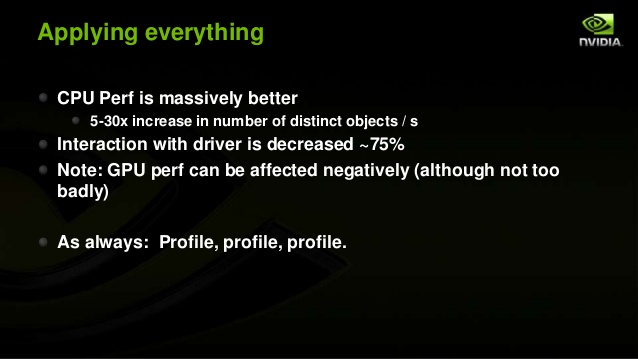 This new OpenGL command cannot turn everything to magic by simply inserting it to a game’s code, however. Developers will have – at least for now – to pass it down to other shader stages as an interpolant. Moreover, insufficient code may have negative results on the GPU, even if this new OpenGL command has been used.

Still, this is really interesting as it further proves that most games were not using the full potential of modern-day – or even last-gen – CPUs.

All in all, it will be interesting to see whether Mantle brings significant performance gains, and whether developers will use this new OpenGL command in order to improve the overall performance of their games (provided they are not restricted in using Microsoft’s API, DirectX).