Though this does not confirm that we are getting a desktop variant as well, but ASUS appears to have let the cat out of the bag by listing this mobile SKU on the Laptop’s specs page.

NVIDIA could release more mainstream and budget tier options for the notebook and desktop segment with the likes of the GeForce RTX 3050 gaming graphics card, however, it’s still uncertain if this GPU will make it to the desktop market space as well.

The GPU appears to only have 60W of TGP and a mere 4GB of GDDR6 memory based upon correlating information that references the code name of GN20-P1.

That makes the GPU somewhat comparable to the 1050 Ti in terms of power and the amount of memory, though you can expect much better performance with the new Ampere architecture. 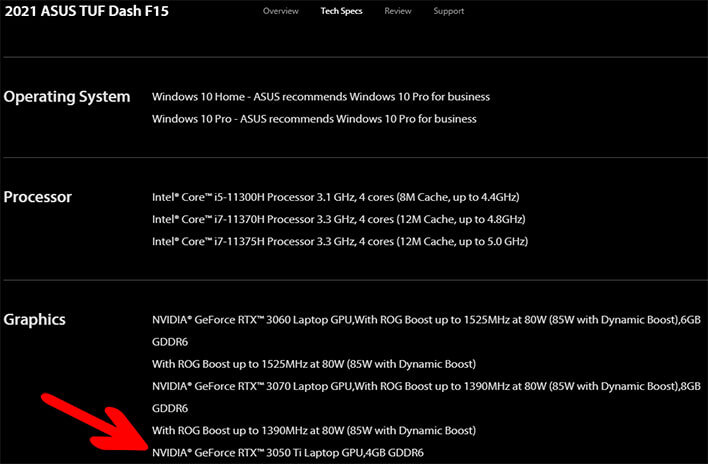 The RTX branding in the model SKU name implies that the graphics card will come with ray tracing support, but Nvidia has never offered RTX on an xx50-series SKU before. Previously, ray tracing was kept exclusive to xx60 series graphics cards. Other GPU technical specifications are still unknown.

Nvidia has yet to confirm the RTX 3050 Ti, and a proper reveal will likely do it more justice than these limited specs we have to work with right now.

In case you didn’t notice, ASUS has now removed the listing, as the product page for the TUF Dash F15 laptop just returns to the company’s main page. However, there are still chances this SKU might hit the Laptop as well as the Desktop market segment.

We are looking at a budget GPU that offers ray tracing support and hopefully has the necessary Tensor Cores to make DLSS a feasible solution, to deliver a decent 1080p gaming experience.

Depending on the AAA game being played, Ray tracing will likely be very demanding on this GPU though, unless you enable DLSS as well, but at least you still get the option to try out RTX if you want.

If we go by Nvidia’s history, xx50-series graphics cards have used the xx7 silicon. For example, the GeForce GTX 1050 Ti and GTX 1650 Ti both of these cards leveraged the GP107 (Pascal) and TU117 (Turing) core dies, respectively.

So it makes sense for the rumored GeForce RTX 3050 Ti to be based on the GA107 (Ampere) die, fabbed on Samsung’s 8nm process node.

So based on this CUDA core count, the graphics card would probably have 96 Tensor cores and 24 ray tracing (RT) cores. Assuming that the 4GB GDDR6 VRAM is clocked at 14 Gbps, we could be looking at a memory bandwidth of up to 224 GBps, tied on a 128-bit wide memory bus.

According to rumors over the past several months, Nvidia is expected to keep the Ti models coming, with an RTX 3080 Ti also in the works. And more importantly, seeing as we already have an official RTX 3060 Ti GPU, we might get more Ti offerings later this year.

A couple of months ago, AIDA64 also added support for the GeForce RTX 3050 GPU, alongside the GeForce RTX 3080Ti. It remains to be seen whether Nvidia will release this budget/entry-level SKU for the desktop PC as well.

As noted by Wccftech, the NVIDIA GeForce RTX 3050 Ti features 20 SMs or 2560 CUDA Cores. This SKU is based on the full-fat GA107 GPU configuration.

The GPU was running at a maximum clock of 1.03 GHz and also features 4 GB of GDDR6 memory running across a 128-bit bus interface. We expect the GPU to have a total bandwidth of 192 GB/s. The GPU should have a TGP below 100W.

The NVIDIA GeForce RTX 3050 non-Ti variant on the other hand features 16 SM units or 2048 CUDA cores. The GPU was running at a maximum frequency of 1.06 GHz. Both these Ampere cards are going to feature 4 GB of GDDR6 memory tied on a 128-bit memory bus. 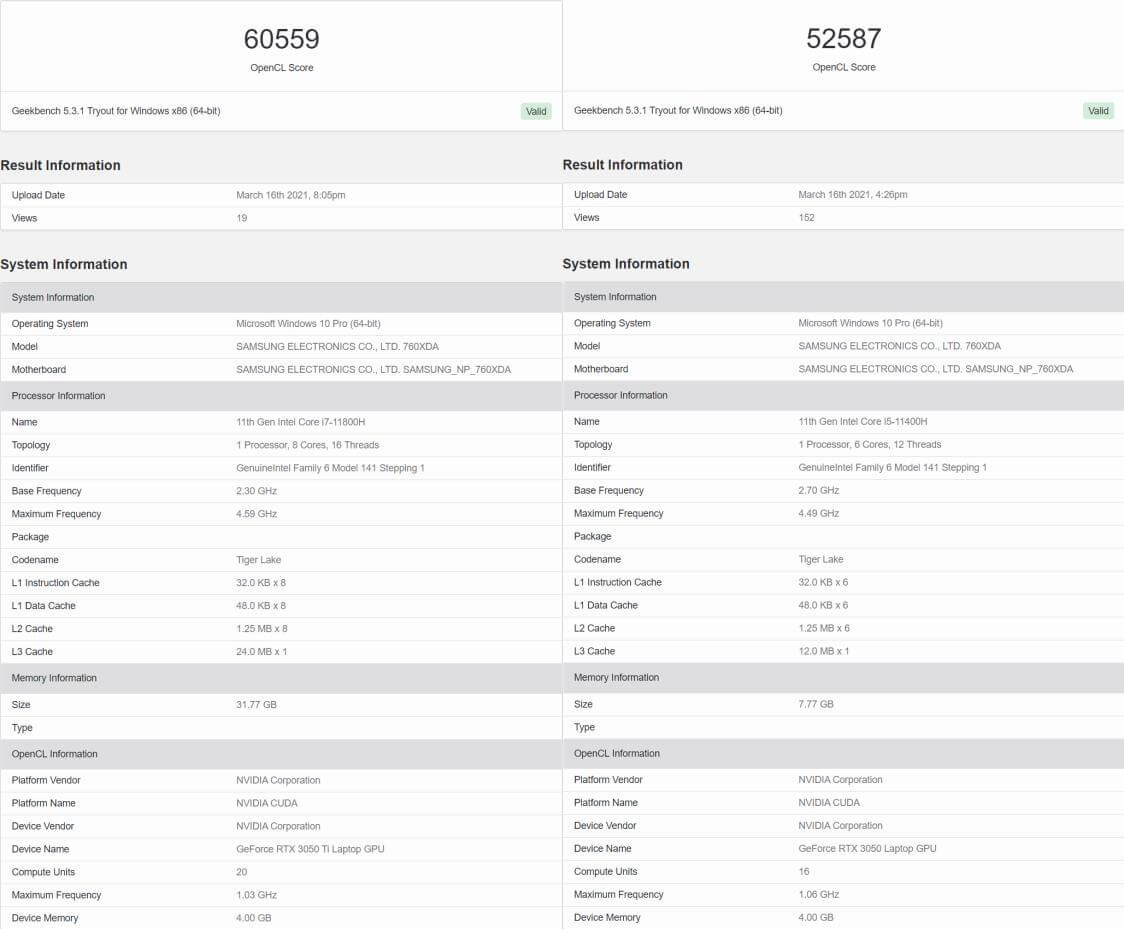 In the OpenCL benchmark, the NVIDIA GeForce RTX 3050 Ti is almost as fast as the Radeon RX 5600 XT and the GeForce GTX 1080 Ti. The GeForce RTX 3050 on the other hand matches the GTX 1080’s performance. But of course, we need to wait for actual gaming benchmarks to make a fair comparison.