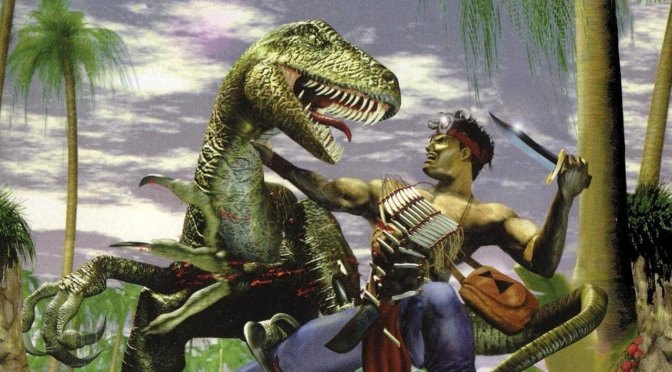 Stephen Kick, CEO of NightDive Studios, has shared the documents for a game Acclaim Austin pitched back in 2004. As you may have guessed, this game never saw the light of day and was cancelled. This new Turok game would be called Turok 5: Resurrection, and would retain its first-person perspective.

Here's the pitch doc for TUROK 5: Resurrection – have a great weekend y'all ? pic.twitter.com/uDgI3MYT3k

According to the documents, Turok 5: Resurrection would feature lush jungle terrain and spirit powered attacks with huge visual effects. The game would also allow players to ride a T-Rex or Triceratops with miniguns and rocket launchers.

Turok 5: Resurrection would also feature new torso, head and limb damage system. Similarly to Turok 2, players would be able to decapitate their enemies.

The game was also promising a new control system. Players would be able to melee their enemies with their left hand, and use a gun with their right arm. Additionally, the game would feature immersive deformable terrain.

Furthermore, Turok 5: Resurrection would feature online co-op with up to two players. Moreover, it would have a deathmatch mode, supporting up to 8 players. Also, both Warp levels and weapons from the previous Turok games would make a return.

It’s really a shame this Turok game never came to fruition because – on paper – it appears to be a really cool FPS!