KOEI Tecmo has announced that its upcoming RPG, FAIRY TAIL, has been delayed once again. According to the publisher, the game will mist its June 25th release, and will now target a July 30th release. This is the second time that KOEI Tecmo has delayed this anime RPG. 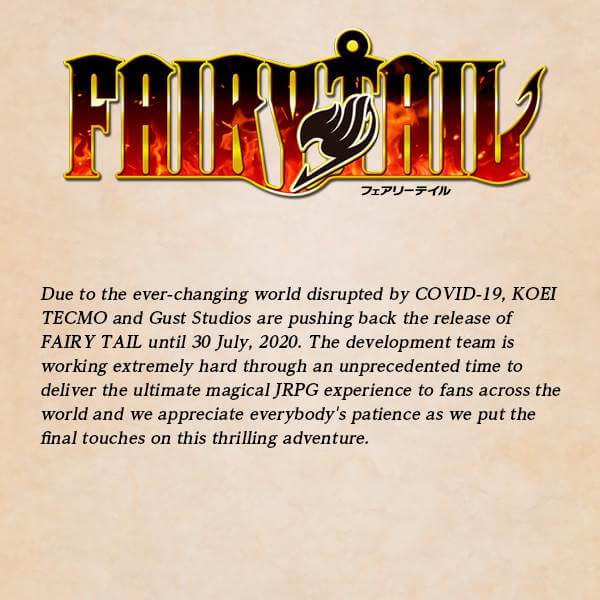 According to KOEI Tecmo and Gust Studios, this delay is mainly due to the COVID-19 outbreak. As such, they’ll need a bit more extra time in order to finish it.

FAIRY TAIL will be based on Hiro Mashima’s best-selling manga and anime series of the same name. The game follows the spell-binding plot from “The Grand Magic Games” story arc. As such, it will enable gamers to re-live, or experience for the first time, the exciting episodes of its storyline.

Players will be able to experience stories previously told in the manga and anime. Moreover, they will even be able to enjoy never before seen story and quest elements.

FAIRY TAIL promises to feature fiery and intense magical battles; with a diverse range of magic available for the extraordinary characters to wield. Renowned moves from the series light up the screen, with some characters such as Natsu being able to take advantage of mode changes – like utilizing the eye-popping Lightning Fire Dragon Mode. In addition, some guild members will be available to support in battle; including the Fairy Tail Guild Master, Makarov Dreyar, who can be called in to provide powerful aid on the battlefield.