It appears that Intel might have another Comet Lake-S desktop processor in the works, as spotted by TUM_APISAK. The core i9-10900K is currently the fastest flagship model in the Comet lake-S series and it has been in the market for quite some time, though with very poor availability or stock.

Recently one Intel CL-S processor was spotted in an unannounced Apple iMac device, the Core i9-10910.

Now, another new Comet Lake processor the Core i9-10850K has popped up in a benchmark database, showing clock speeds hovering around 3.60 GHz base and 5.20 GHz boost. Assuming that this chip isn’t an OEM-only part/SKU, Intel might be readying a Comet Lake refresh to ward off AMD’s recent Ryzen 3000XT lineup. We don’t know for sure whether this processor will come to the market though, but the part does look promising.

From the above geekbench entries it appears that the Core i9-10850K doesn’t feature Thermal Velocity Boost (TVB), and this would explain why this 10-core part maxes out at 5.2 GHz, instead of 5.3 GHz like the Core i9-10900K.

Unless of course some brand is planning to offer an overclockable prebuilt system, I don’t see the Core i9-10850K being an OEM-only SKU. This processor should hit the retail shelves. The main contributing factor for the Core i9-10850K would be its price tag. For context, the Core i9-10900K has MSRP of $499, though in reality this chip retails for $529.99, assuming you can find it in stock.

Being an unlocked K processor, it would be easy to overclock the Core i9-10850K to match or even surpass the performance of a stock Core i9-10900K processor. And if Intel manages to shave off $30 to $50 off the price tag, then that would place this new processor in a slightly better position in the market.

On paper, the Core i9-10850K definitely appears to be an enticing option, but I hope Intel releases it to the market soon. 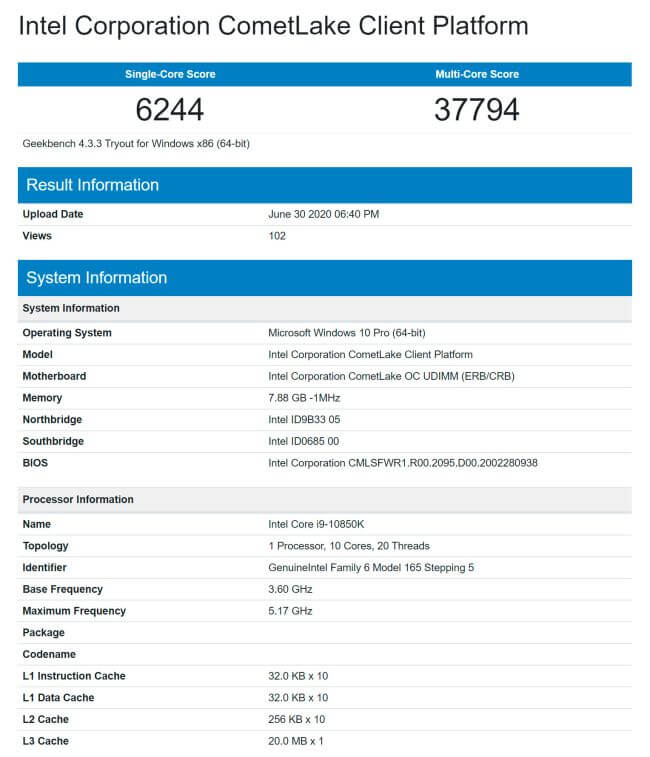