Intel’s next generation of Alder Lake-S Core processors are said to be the company’s first 10nm-based mainstream desktop processors, and we have already seen documents, datasheets, and release notes for these CPUs which also appeared on Intel’s own developer website. These processors have been confirmed to support a new LGA 1700 socket as well.

Back in July, Intel confirmed that its next-gen 10nm Alder Lake-S CPU lineup will launch in the second half of 2021. Intel has also confirmed that the Alder Lake-S CPUs will use a new Hybrid Core/Atom processor architecture. These CPUs are expected to support the DDR5 memory and PCIe 5.0 interface, though there was chatter on the web before that these might also launch with support for PCIe gen-4.0.

As the name implies, the LGA1700 socket is comprised of 1,700 pins, which gives us 500 more pins that the existing LGA1200 socket that houses Comet Lake-S, and the upcoming Rocket Lake-S series of processors.

Alder Lake-S CPU lineup will be the first Intel architecture to offer ARM’s big.LITTLE approach to desktop processors. Alder Lake-S would feature an 8+8 core configuration, in which half the cores are going to be Big Cores and the rest of the remaining would be Small Cores. These processors would thus feature a total of 16 cores in a single package.

The small low-power cores have mostly been constrained by size limitation, and power consumption figures and they didn’t have support for the instructions required for various high-performance computing tasks, and also for media encoding/decoding workloads, including other similar heavy tasks. But this is now going to change with the Alder Lake-S CUP lineup, with the upcoming Gracemont cores having support for AVX, AVX2, and AVX-VNNI instruction sets, respectively.

According to Intel’s document, all cores used in Alder Lake architecture will support AVX, AVX-VNNI, AVX2, and UMONITOR/UMWAIT/TPAUSE instructions; however, they won’t have support for the Intel AVX-512 instruction set. Having AVX-512 might have helped here since the lack of support means that the CPU will not be able to offload workloads from its Golden Cove cores to Gracemont cores. In case you didn’t know, UMONITOR, UMWAIT, and TPAUSE are a set of user wait instructions.

But nonetheless, Intel’s AVX-512 has limited use in Client user applications, and they may also require more power. Though, the Gracemont micro-architecture has support for 256-bit AVX instructions. Usually, the addition of AVX-512 requires additional hardware and increase of interconnect bandwidth, which raises the power consumption and increases the die size as well.

We don’t have full details on Alder Lake’s architecture yet. In addition to existing AVX and AVX2 instructions, Intel’s Alder Lake and the HPC Sapphire Rapids CPUs will also have support for AVX-VNNI (vector neural network instruction) which is used for deep learning. 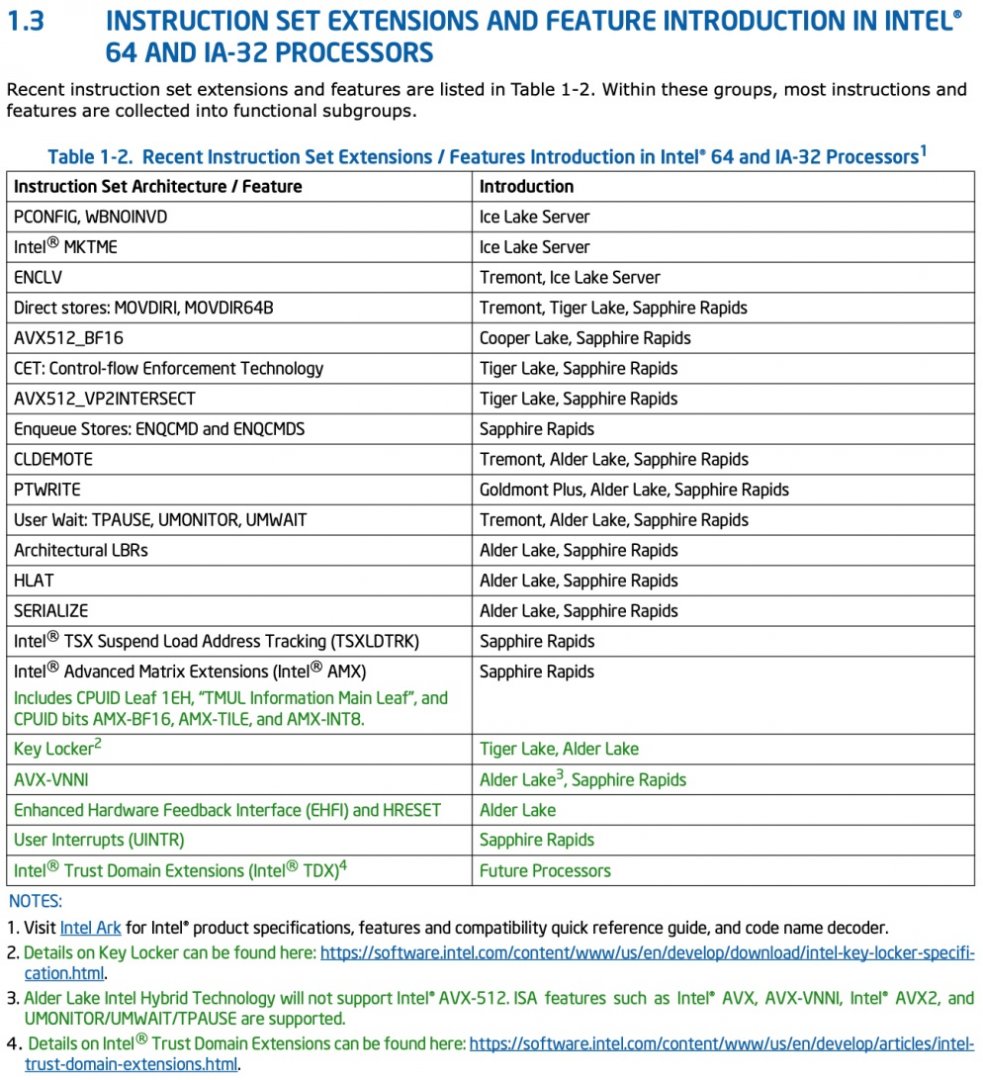 Back in July, a new GNU compiler update was posted by Phoronix, which included a list of compatible instructions for both Intel’s upcoming data center/HPC Sapphire Rapids chips and the Alder Lake desktop chips.

This also eases the operating system scheduling routines that target different workloads at the corresponding cores. Therefore, the lack of AVX-512 support for Alder Lake-S serves as further evidence that Intel will bring a new hybrid core architecture design to desktop PCs.

Also, according to one report posted by Zhihu, the new hybrid Technology in the upcoming Alder Lake architecture would allow both CPU cores (small and big) to share the same instruction set and registers, but the actual availability of certain instructions would depend on which core is actually enabled and active.

The user also shared a screenshot from Intel’s internal document which suggests that some of the following AVX, TSX-NI, and the FP16 instruction sets will be disabled when the Hybrid Technology is enabled (both Big and Small cores are enabled at the same time).

The instructions will only work when the hybrid technology is disabled, which means the Small cores are disabled. By disabled we can think of the processor’s mode/PL state, though I need more technical info to confirm how this will work on Desktop PCs. Both the big and small cores will have the same amount of instruction sets and model-specific registers, but will have different computational powers, and the overhead will also differ.

We can assume the big cores to have higher throughput and clock speeds, whereas the small cores are going to be more power efficient. The ARM’s Big/Small core architecture makes more sense for mobile devices, to conserve power, but we still don’t know how this Hybrid technology is going to actually work on Desktops.

The Alder Lake-S CPU architecture will also feature the CLDEMOTE ‘cache line demote instruction’ set, which I’ve explained in details in my previous article. Though, to reiterate, the CLDEMOTE instruction hints to hardware that the cache line that contains the linear address should be moved (demoted) from the cache(s) closest to the processor core to a level more distant from the processor core. 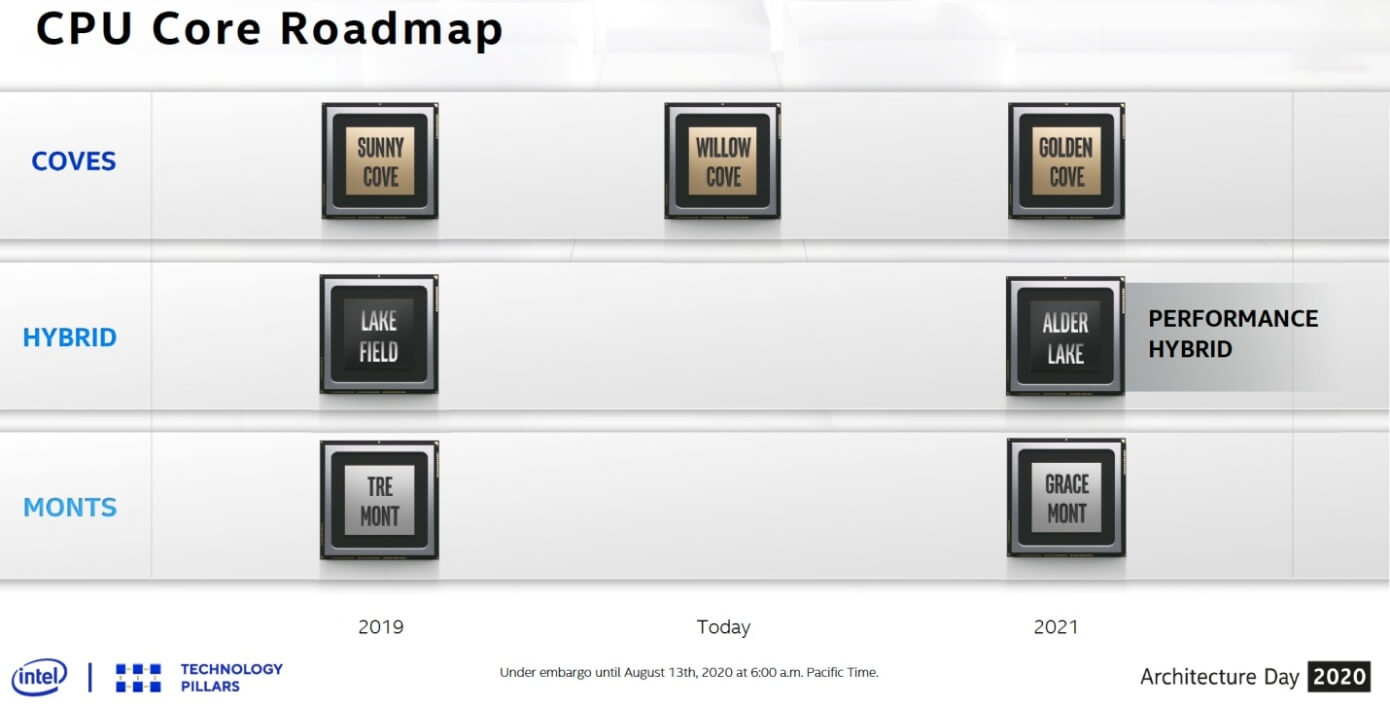