Rocket Lake (RKL) is a planned microarchitecture designed by Intel as a direct successor to the Comet Lake-S series of desktop CPUs and high-performance mobile devices. These were expected to hit the market by the end of this year, but the roadmap from Intel paints a different picture.

Intel has been using the same iteration of the 14nm FinFET process node with the Skylake Architecture for many years. Comet Lake-S was also fabbed on this aging process node, which has held Intel back in terms of IPC uplift and efficiency gains over AMD’s Ryzen lineup. Rocket Lake-S desktop platform is going to be the last CPU architecture to be based on an advanced 14nm process node. Intel’s Rocket Lake will use a 14++ nm back-port of the Willow Cove core architecture. Rocket Lake is going to be the desktop equivalent of Tiger Lake.

Now, according to internal reliable sources over at Videocardz, one alleged photo has been leaked in which we can see the performance tier hierarchy for the upcoming Rocket lake-S CPU lineup, along with their core and thread count details. The most important piece of info from this photo reveals that the Core i7 vPro lineup would feature an ‘uneven’ configuration of cores and threads. The vPro lineup is essentially the standard lineup but with some added security features through the Intel vPro platform.

According to the leaked picture, the Core i7 series will come in 8C, and 12T flavors, instead of 16-threads. The same leaked slide also mentions the Core i9 series, but these are having the usual 8 core and 16 thread configuration. Lastly, we have the Core i5 variant which sticks with 6 cores & 12 threads having a total of 12 MB cache. Intel might be making up for the cores and threads loss with a new architecture which is said to be a hybrid of Sunny Cove (Ice Lake) & Willow Cove (Tiger Lake), but featured on a 14nm process node.

There are three possible reasons for the Core i7 variant’s 8C/12T configuration. Either Intel will start using an uneven hyper-threading configuration for these new CPUs, or the slide has a typo error which shows 8 cores instead of 6, that, or the processor will feature eight cores and sixteen threads (similar to the core i9 series). The slide also mentions 16M which appears to be the cache of the i7 processor; which again hints that Intel plans to go for an uneven hyper-threaded configuration, which will be the first for the company. Nonetheless, the processor features a 16 MB of cache, which means that the chip is a disabled or cut-down version of the Core i9 variant, which didn’t pass the quality control check.

Another very interesting piece of info from this slide reveals that the company also has plans to release ‘Comet Lake-S Refresh’ lineup for the core i3 and below processors, assuming the slide and its contents are legitimate.

When it comes to the Rocket Lake-S CPU lineup, I have another important last piece of info to share with you. Previously few months ago, one VLSI engineer who goes by the name Retired Engineer on Twitter, @chiakokhua, tweeted one of his old findings from November 2019 last year. According to him the upcoming Rocket Lake-S processors are going to feature ‘multi-chip modules/MCM’ of core and uncore GPU dies built on different silicon fabrication nodes.

This is speculation from his side, but he has a strong record of accurate prediction in the past, when he spoke about the 3rd gen Ryzen Matisse AM4 processors being multi-chip modules as well. Apparently, it might be possible that Intel is also designing these socket LGA1200-based Rocket Lake processors to feature multi-chip modules, similar to Matisse in some ways.

Rocket lake-S CPUs are going to support the PCIe 4.0 standard and interface, and as per some rumors these might launch at the end of this year, or early 2021. But this places Intel’s Z490 platform longevity in a difficult position, since the company won’t be supporting the LGA 1200 socket for long. LGA 1200 based motherboards are probably not going to stay for a long time, as Z490 chipset is only expected to support Comet Lake-S and Rocket Lake-S CPU series, while ‘Alder Lake-S’ is already rumored to feature the new LGA1700 socket. 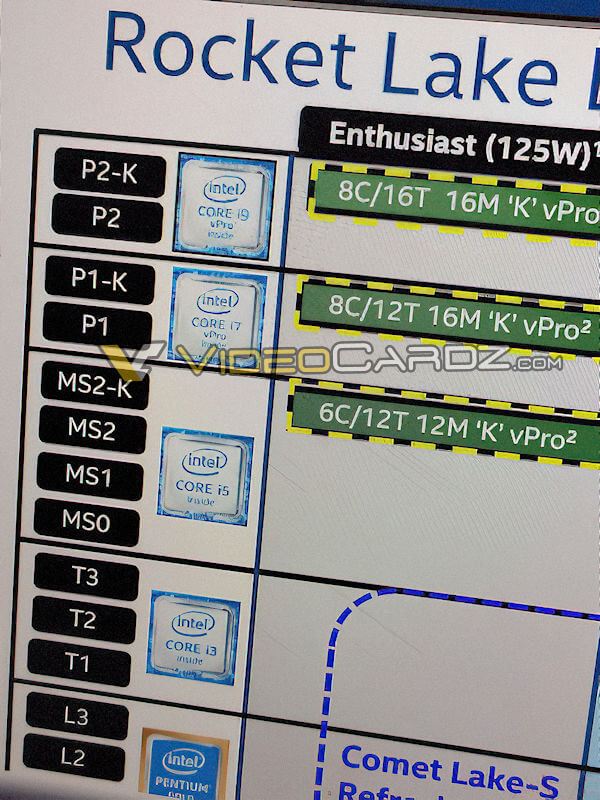 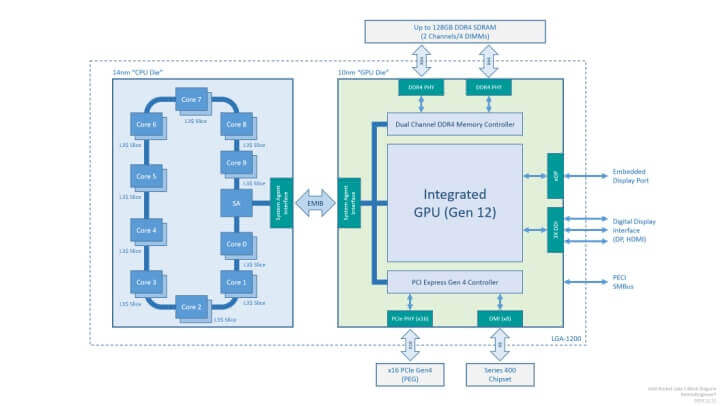