This is the first public tease of Intel’s Xe HPG graphics card, and the card will sport features like compute efficiency, scalability and graphics efficiency. Intel has also confirmed that the new HPG architecture will use the GDDR6 memory type. 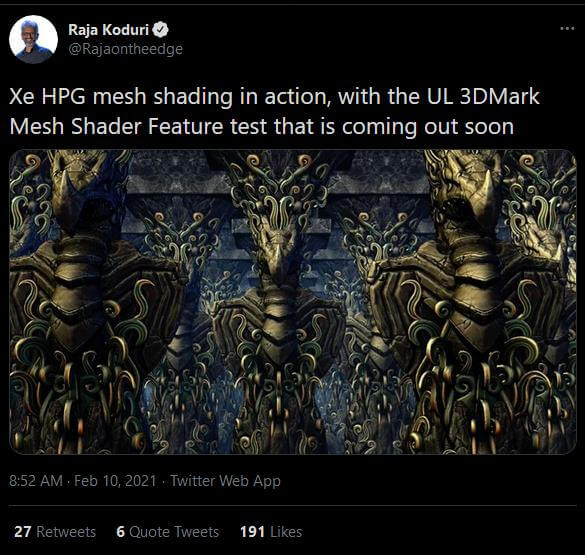 Mesh Shader is one of the major features introduced within DirectX 12 Ultimate API back in 2020. The feature is supported by NVIDIA’s Turing, Ampere, and AMD’s RDNA 2 lineup of gaming cards.

Prior to mesh shader, the GPU geometry pipeline hid the parallel nature of GPU hardware execution behind a simplified programming abstraction which only gave developers access to seemingly linear shader functions.

For more technical details on Mesh Shaders, kindly refer to NVIDIA’s and Microsoft’s developer blogs. NVIDIA has already demoed Mesh Shading back in 2018.

Back in October 2020, Intel taped out its first discrete gaming GPU, the Xe-HPG ‘DG2’ graphics processor. The company reaffirmed that it is working on a full stack of discrete Xe-HPG-based GPUs that will target the mid-range/mainstream, and also the enthusiast gaming market segment sometime later this year.

This GPU was already rumored to be manufactured outside of Intel’s fabs, in an external foundry. Back then while Intel didn’t mention which fab and process node was going to be used, but as per one report from REUTERS, they might tap TSMC’s enhanced 7nm process node.