These obviously target a totally different audience though (not gamers), but nonetheless this technology brings a lot of improvements, hence its worth giving a cursory glance, if you are out in the market for thin lightweight Laptops. Else, this news might not be of much interest to some of you.

Foveros is basically a chip stacking technology that allows Intel to combine their mainstream CPU cores with some of their low-power CPU cores to produce hybrid CPUs similar to what ARM does with their big.LITTLE technology. The chipmaker has announced two processors, the Core i5-L16G7 and the Core i3-L13G4 which use ‘one’ 10nm Sunny Cove BIG core paired with ‘four’ 10nm Tremont small cores.

Currently we don’t have any info regarding the Core i7 or i9 chip variants. Thanks to Intel’s Foveros 3D packaging technology, these Lakefield processors are much smaller than other mobile CPUs, enabling OEMs to create new ultra-light and innovative PC form factors like the foldable Lenovo ThinkPad X1 Fold and dual-screen Microsoft Surface Neo.

It’s also going to be in the Samsung Galaxy Book S laptop, that previously only came with a Qualcomm Snapdragon 8cx processor. These new 7-watt, dime-sized processors are called Intel Core processors with ‘Intel Hybrid Technology’, and Intel claims them to be a game changer.

The Lakefield lineup of processors include the Intel Core i5-L16G7 and Intel Core i3-L13G4, and both of these come with one 10-nanometer Sunny Cove core for high-performance applications, and four power-efficient, 14nm Tremont Cores for balancing the power and performance optimization for background tasks. Intel claims some serious performance improvements, including hardware-guided OS scheduling, which allows the OS scheduler to determine whether applications should run on the Sunny Cove or Tremont cores for optimized performance.

Lakefield processors are the first to ship with a package-on-package (PoP) memory which means the PCBs of these devices can take up much less space. Moreover the standby power can go as low as 2.5 mW, which is 91% less as compared to the Y-series processors. They also have two display pipes which allows for dual display form factors to be built, and this will help manufacturers to build smaller computers than before.  According to Intel the CPU package is 12 x 12 x 1 mm in size which is done by stacking the two logical dies and two layers of DRAM, without the need of an external memory.

Lakefield processors are much smaller than their previous counterparts, and if compared to the Amber Lake-Y Intel Core i7 8500Y, which is a dual-core SoC for tablets and passively cooled notebooks, the Lakefield Core i5-L16G7 package is almost 56% smaller and the entire board takes 47% less space.

Lakefield was first announced by Intel at their 2019 CES keynote session, and Intel laid out some ambitious goals for Lakefield when it introduced the Foveros concept, like better power efficiency which would consume 1/10th of the standard power of the existing architecture, 50% more graphics performance, and 40% reduced occupied area (goes for the z-height (40% reduction) as well).

In the end Intel’s plans were to release powerful laptops that are smaller in size while consuming less power. But we’ll have to wait for some official benchmarks to figure out whether Intel has indeed achieved its goal with Lakefield or not. 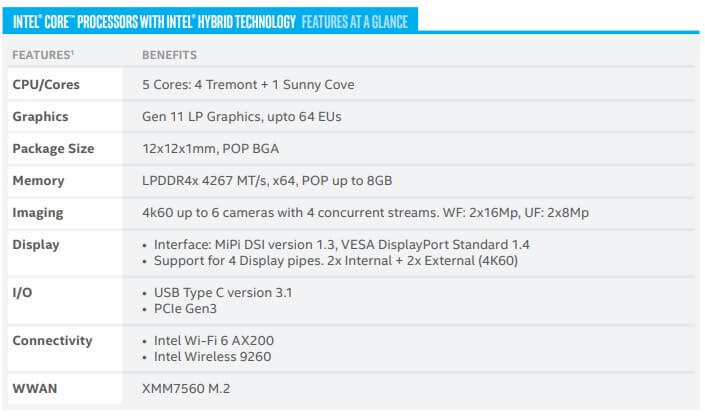