As you already know Intel launched its 10th gen Comet Lake-S CPU lineup back in April 2020. Notably some SKUs were not included before in the launch, like e.g. the Core i3 10100F entry-level processor.

Now Intel has listed this Core i3 desktop CPU on its ARK database website, which sort of confirms that the company plans to release this entry-level chip to the retail market, most probably to give a stiff competition to AMD’s Ryzen 3 3300X Zen 2-based CPU.  The 10th gen Comet Lake CPU lineup was the fifth iteration of Intel’s Skylake microarchitecture, built on Intel’s 14++nm process node.

The new Core i3 10100F entry-level processor appears to be a decent budget upgrade option for casual gamers. This SKU isn’t aimed at enthusiasts though, since Intel is targeting the budget low-end market segment.

Coming to the specs, this new F-suffix SKU is a 14nm Comet Lake chip having four cores and eight threads, 3.6 GHz base frequency, and 4.3 GHz as the boost clock speed.

The processor has a 65W TDP (thermal power design) envelope; which means this quad-core SKU has relatively low cooling and power requirements, which is great news for budget gamers who can’t afford high-end aftermarket coolers.

The Core i3-10100F processor seemingly lacks built-in integrated graphics/iGPU support, hence the “F” suffix in the model name. Though, the lack of iGPU is not that much of an issue since Gamers are going to pair this CPU with a mainstream/mid-range discrete graphics card (dedicated GPU).

Do note that this SKU is still missing from Intel’s master price list quote, but the ARK website has been updated. I don’t know when this SKU is going to hit the retail shelves though. But the company aims to keep the pricing of this Core i3 part within $80-$99 USD range.

Intel plans to release a direct competitor to AMD’s Ryzen 3 3300X CPU, which has been currently out of stock since past six months or so. The Ryzen 3 3300X CPU is based on the Zen 2 microarchitecture and it is fabbed on the 7nm process node.

Assuming AMD’s CPU has an MSRP of roughly around $120 USD, the Intel Core i3-10100F if priced within the $80-$99 USD range, may offer a viable option for budget gamers looking for an upgrade.

AMD has also included the Wraith Stealth CPU cooler with the Ryzen 3 3300X CPU package, whereas Intel is using the same old stock cooler/heatsink. If the Intel Core i3-10100F processor can match the Ryzen 3 3300X in gaming performance, then this would be a strong contender in the budget and entry-level CPU market segment.

Though, it remains to be seen how well Intel’s Core i3 stacks up against the Ryzen 3 SKU in PC games. 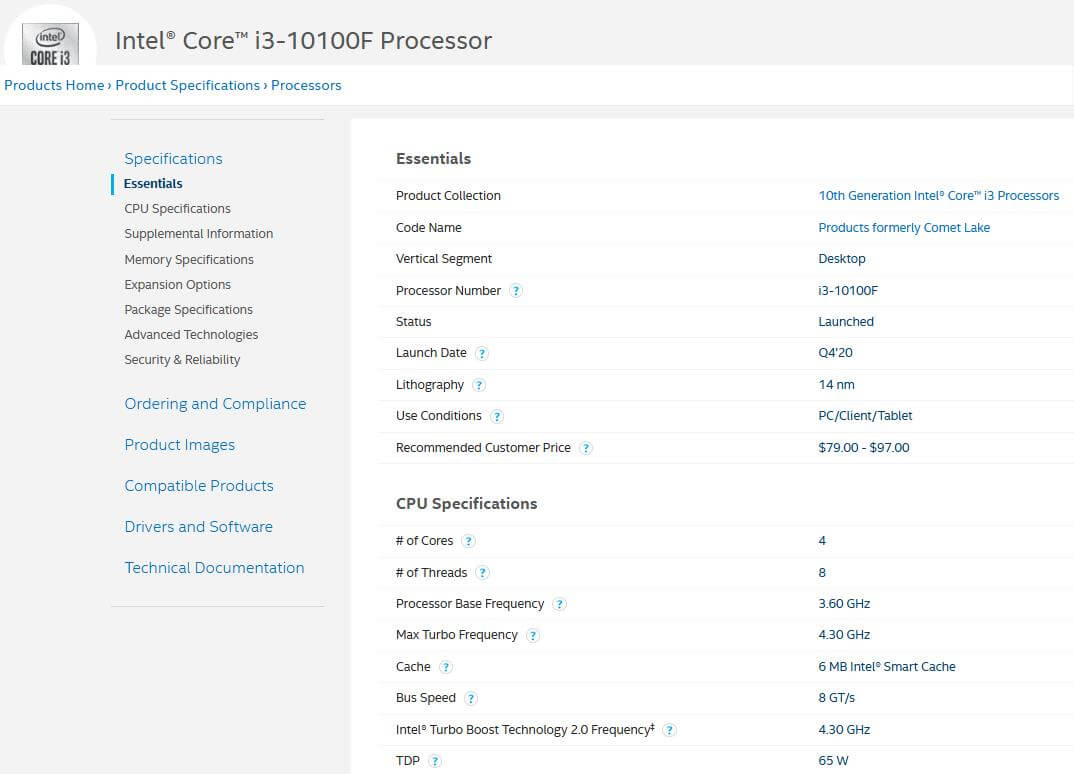