Soon to become Intel CEO Pat Gelsinger personally reviewed progress on the company’s 7nm process, and he is pleased with the “health and recovery of the 7nm program.” Gelsinger said Intel will expand its use of external foundries for some products; however, he is confident that the majority of Intel’s 2023 CPU products will come from the company’s own factories itself.

“I’ve had the opportunity to personally examine progress on Intel’s 7nm technology over the last week. Based on initial reviews, I am pleased with the progress made on the health and recovery of the 7nm program. I am confident that the majority of our 2023 products will be manufactured internally.”- Pat Gelsinger.

Chips based on the 7nm process will debut in 2023, with client processors coming in the first half and server/HPC products following them later. Intel’s CEO Bob Swan on the other hand said that the company’s yield issues with the 7nm process were because of the company’s production process, which introduced some defects in the long run. But they have been able to rectify the fault.

“By rearchitecting these steps, we have been able to resolve the defects,” Swan said.

Pat Gelsinger goes on to say that the company remains committed to re-establish its lead in the process node technology, saying he’s “not interested in closing the gaps…but being the unquestioned leader in process technology.”

“Personally, I was very involved in the period where we were diminished in the marketplace and late to multi-core. In that period of time in 2005 through 2009, we turned around the company and unquestionably established the leadership position after a period where many were questioning the ability of the company to be successful yet again.”

Because of  Intel’s long-term 10nm issues and 7nm delays, many analysts were fearing that Intel will fall behind its competitors as they utilize newer manufacturing technologies from 3rd party foundries like TSMC or Samsung.

Gelsinger however noted, “It’s likely that we will expand our use of external foundries for certain technologies and products in the future.”

The company leads have confirmed that Intel will stay true to its internal manufacturing practices, but have also stressed that there will still be a need for some outsourcing to happen.

On some other news, Bob Swan, Intel CEO has reaffirmed that that desktop and mobile Alder Lake CPUs will be qualified for production in 2H 2021.This means that the production will start soon after the qualification phase is over.

“As we look ahead, we are excited about the capabilities we are bringing to customers with ‘Alder Lake’ for mobile and desktop PCs and ‘Sapphire Rapids’ for the data center. These products take advantage of our enhanced SuperFin process technology and numerous architectural improvements, and both are broadly sampling to customers.

We will qualify Alder Lake desktops and notebooks for production and begin our volume ramp in the second half of 2021. We expect production qualification of Sapphire Rapids at the end of 2021.”

It has also been confirmed that Ice Lake Server and Rocket Lake-S series of desktop client processors are now shipping to customers as well.  As you may already know, 12th gen Alder Lake processors will be built on a 10nm SuperFin process node.

The shift to 10nm will be a first for Intel’s desktop processors, which have been on the 14nm process node since 2015. 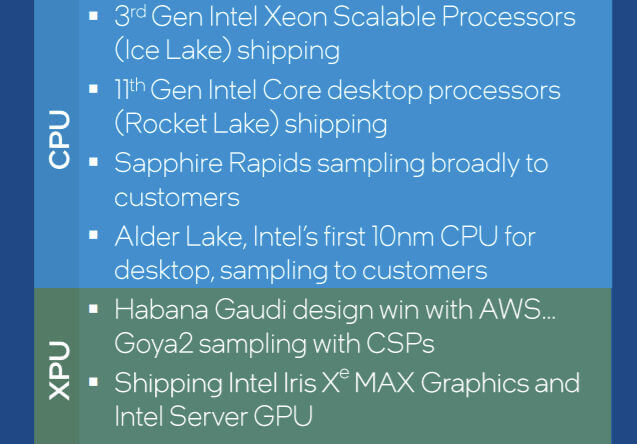 Lastly, according to a recent Tweet coming via Uniko’s Hardware, Intel is now expected to unveil its Alder Lake-S series of processors this September 2021. Intel 11th Gen Rocket Lake-S series are expected to debut in March this year, so it makes sense for the company to take at least a minimum of six months gap with the Alder Lake lineup. 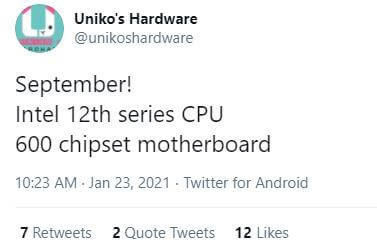 In September, Intel will also launch its 600-series chipsets for LGA1700 socket motherboards. This would be Intel’s brand new overhauled platform having full support for DDR5 memory and PCI Gen 5 interface. Alder Lake CPU lineup will bring the concept of heterogeneous multi-core to x86 processors for consumer and client PCs.

These processors would thus feature a total of 16 cores in a single package, at least initially. Alder Lake-S CPU lineup will be the first Intel architecture to offer ARM’s big.LITTLE approach to desktop processors.